Twas but a few weeks ago I was lamenting the lack of tangiable story and motivation in Action RPGs, as I wrote about one of my all-time favourites, Titan Quest, observing that the entire genre offers only two-thirds of a game. Then, as I browsed the archives on GOG.com, I spotted a game called Nox. I've seen the name a bunch of times. I recognised the cover as familiar. But I honestly had no idea what sort of game it even was. So when I learned it was an ARPG I've never played, I decided it was definitely worth a go. I'm rather glad I did!

You may well be intimately familiar with Nox - there's a community that still keeps it working on modern machines, and creates mods for it. (The same exists for Daikatana, so let's not take this as a mark of quality.) Clearly it's an embarrassing gap in my knowledge, which I could have filed alongside other deeply awkward spaces such as "I've never played a Hitman game." But after wrestling with it to get it working (disappointingly, GOG is selling a version that doesn't run out-of-the-box on Windows 10), I feel like Nox is a game I would really have valued on its 2000 release. Playing it today, it manages to exude enough interesting charm that I'm achieving some sort of post-hoc nostalgia, rather than irritation at its somewhat dated design.

It certainly begins more interestingly than most ARPGs. Instead of your being some aloof stranger who's wandered into town, with everyone you meet madly asking you to do their chores, here you're Jack. Just Jack. Some bloke from modern-day America, sat watching TV with his partner, when things start going a bit weird. In a more traditional RPG way, there's an evil Queen of Necromancers, Hecubah, who is attempting to summon a dangerous magic orb back from Earth so she can, I dunno, take over probably. But in doing so, she accidentally summons Jack too, and he finds himself thrown into a trad-fantasy situation where he's forced into being a champion of this realm. 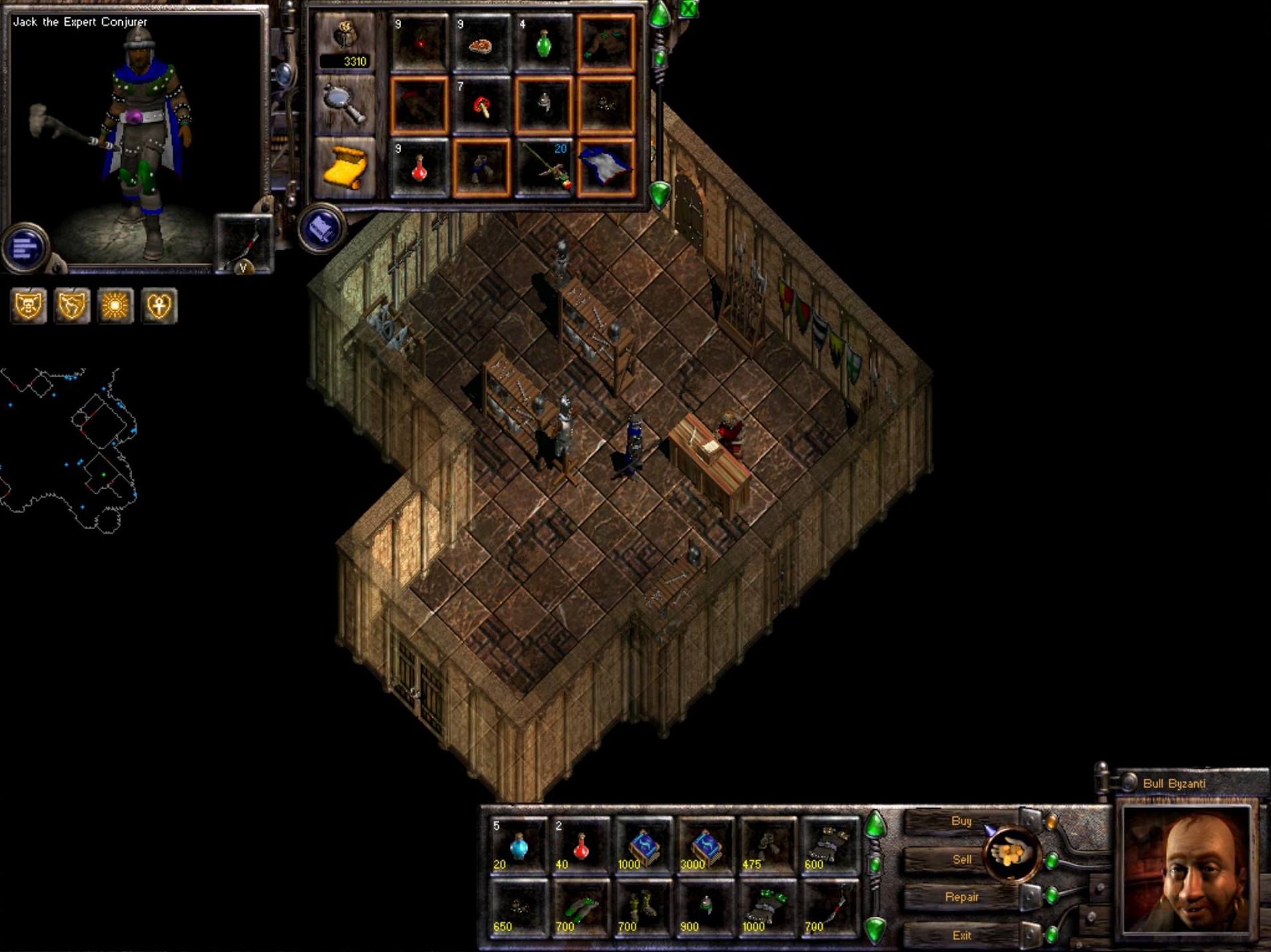 This would all be slightly more interesting if any of it had any repurcussions at all as you're actually playing. Sadly it does not, and you may as well have been that wandering laconic stranger for all the real difference it makes outside of the chapter introductions. But you know, they tried.

They being Westwood Pacific, which was formerly Burst Studios, the creators of the mighty Toonstruck. Latterly they became EA Pacific, and as you might well imagine, lasted about 30 seconds under that publisher's mantel, before being consumed into EA LA, along with the rest of Westwood. But we must put aside the inevitability that EA spoiled something that must be mentioned in all retrospective articles, and focus on this one particular oddity, a game that had far more in common with Diablo than any of Westwood's Command & Conquer staples. 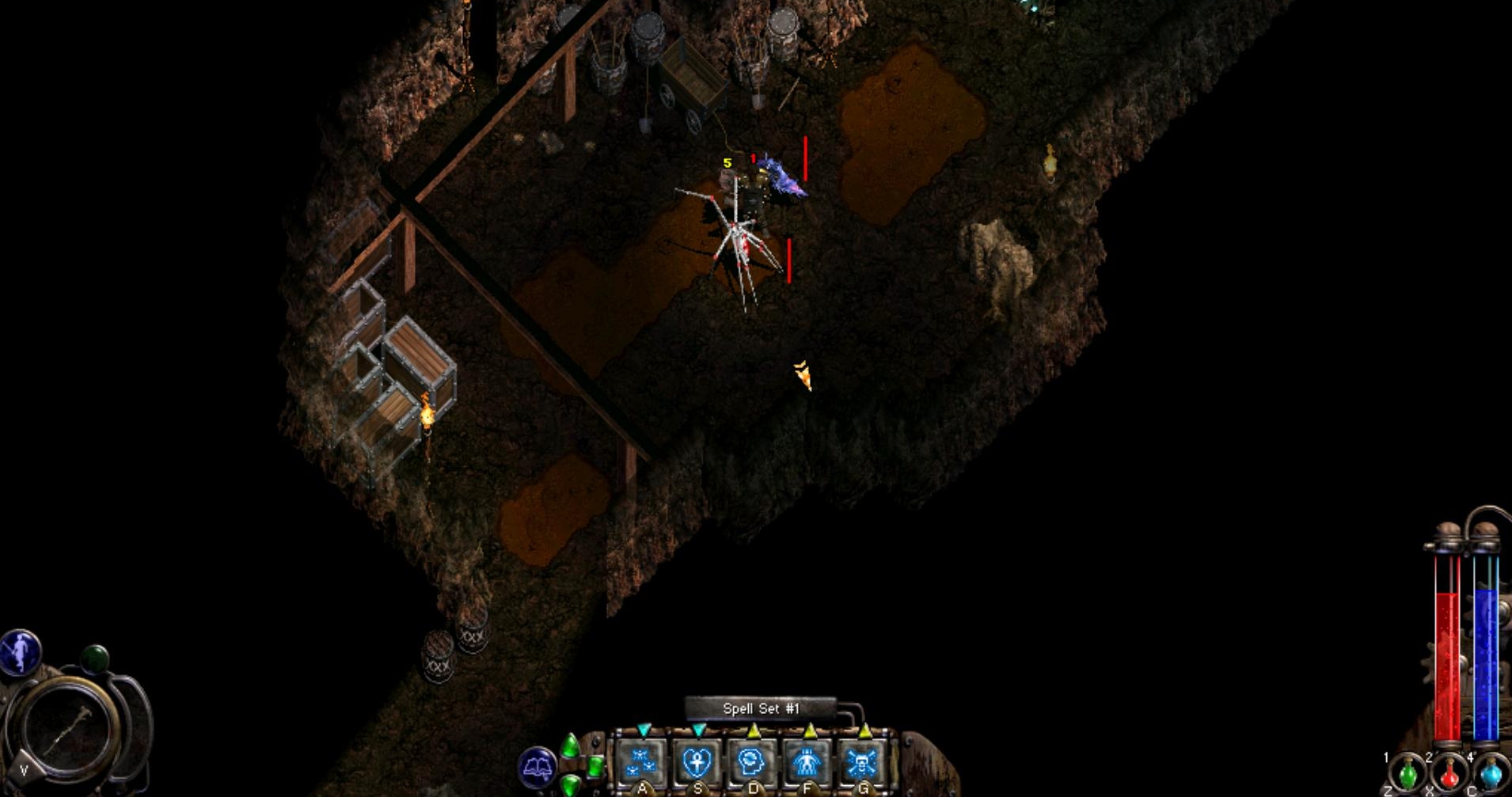 What does have repercussions is the character class you choose. Unfortunately the game doesn't go to the trouble of explaining how regular-Jack is now suddenly a Warrior, Conjurer or Wizard, but whichever you opt for significantly impacts the game you'll play - I'd say more so than in any of the big-name ARPGs. For instance, in a style far more familiar from the early days of MMOs, your class determines your starting location and first few missions. It then continues to impact how you experience the later chapters, with your goals being different despite the locations being the same. (For instance, play as a Conjurer as I did and you'll visit the Hamlet Of Brin to recover an amulet of teleportation. Play as a Warrior and you'll be, er, rescuing some maidens. Sigh.) And of course it impacts your range of weapon and armour options, with Warriors unable to use any magic at all, and Wizards no use at melee at all. Conjurer is the muddle of the two, but I picked it for a far more important reason: the ability to "charm" enemy creatures to have them temporarily fight on your side.

It's marvellous, rolling up to a little village with a bear and giant scorpion trotting along faithfully behind me. No one seems to mind, which is odd, but then hey, I don't know their lives. But what's markedly different here than in your standard Diablo-clone (and it's well worth noting Nox came out months before Diablo II) is the sense that you're playing a more involved role-playing game... at times. For instance, while there's loot, you're not a walking vacuum. Weapon upgrades are rare, and usually found as big rewards at the end of a dungeon, or as expensive items in shops. There's no augmenting them with gems or shards or whathaveyou. And perhaps most of all, they degrade, and require repairing in stores. Which is something you need to think about before setting off on a big quest - will this gear last throughout, and how much extra can you afford/do you want to lug, before you set off? This has led to excellent situations where I've been trying to complete the final stages of a multi-level dungeon with my bare fists, clothes in rags, and the frantic throwing of stun and slow spells at the enemy hordes. It allowed improvisation!

A large part of that is due to that other rather huge difference from the norm: there's no teleporting nor resurrection here. Instead, there's a quick-save (in single-player mode, obviously), which feels hugely out of place for the genre, but only because of its unfamiliarity I think. It certainly changes the dynamic, especially in this era of rogue-lites where we far more expect failure to result in starting over. Keeping tapping F2 and you'll eventually make it through. Which does feel a bit spammy, but at the same time, so does portalling back to where you died and carrying on, so NO COMPLAINING. 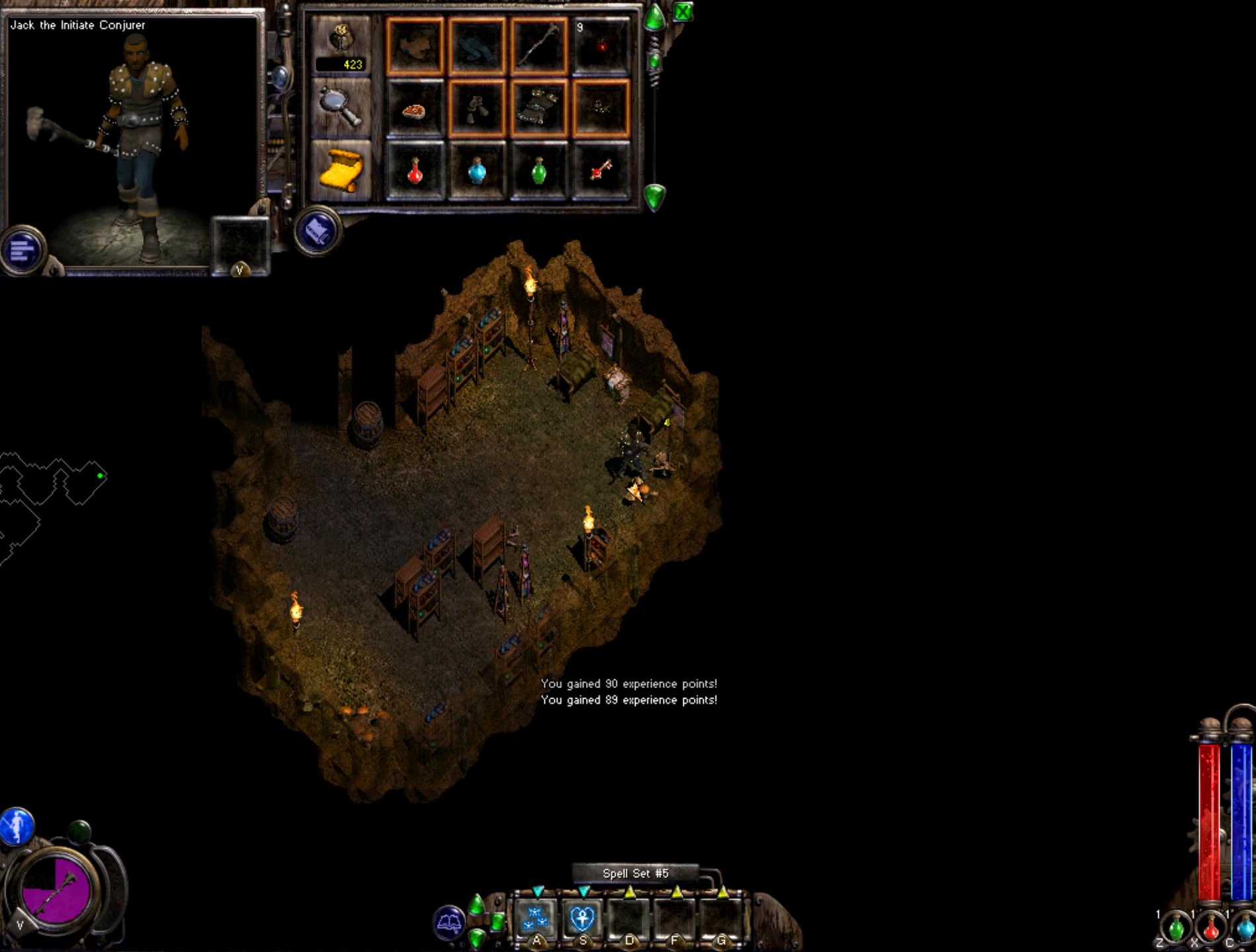 My complaint previously about Titan Quest and all the others is that the characters you engage with are basically scarecrows, and there's no sense of relationship at all. That's pleasingly not the case here. Characters recur, the enemy is meaningfully described, and even encountered long before you have to defeat her. It feels a lot more like a narrative, perhaps in some ways because of its own restrictive chapter-based delivery.

What is definitely lacking here is character stats. You level up, but I'm lost as to why. XP is gained, every now and then a bar is filled, and I guess you get a bit more powerful, a bit more health, a bit more mana, in line with the increasing power of the enemies surrounding. This isn't like a straight Diablo-clone where you can revisit old areas to ludicrously overpower your character, so it seemingly serves no sensible purpose at all. It's a real shame that you can't focus your character within their class at least a little bit, even if it's not via a full skill tree. I guess the rationale was there's such a significant difference between the three starting builds that this should be enough? But oh argh! It brings in some of the elements that would allow the ARPG to be more than two-thirds of a game, and then removes enough that it ends up back in the same place! 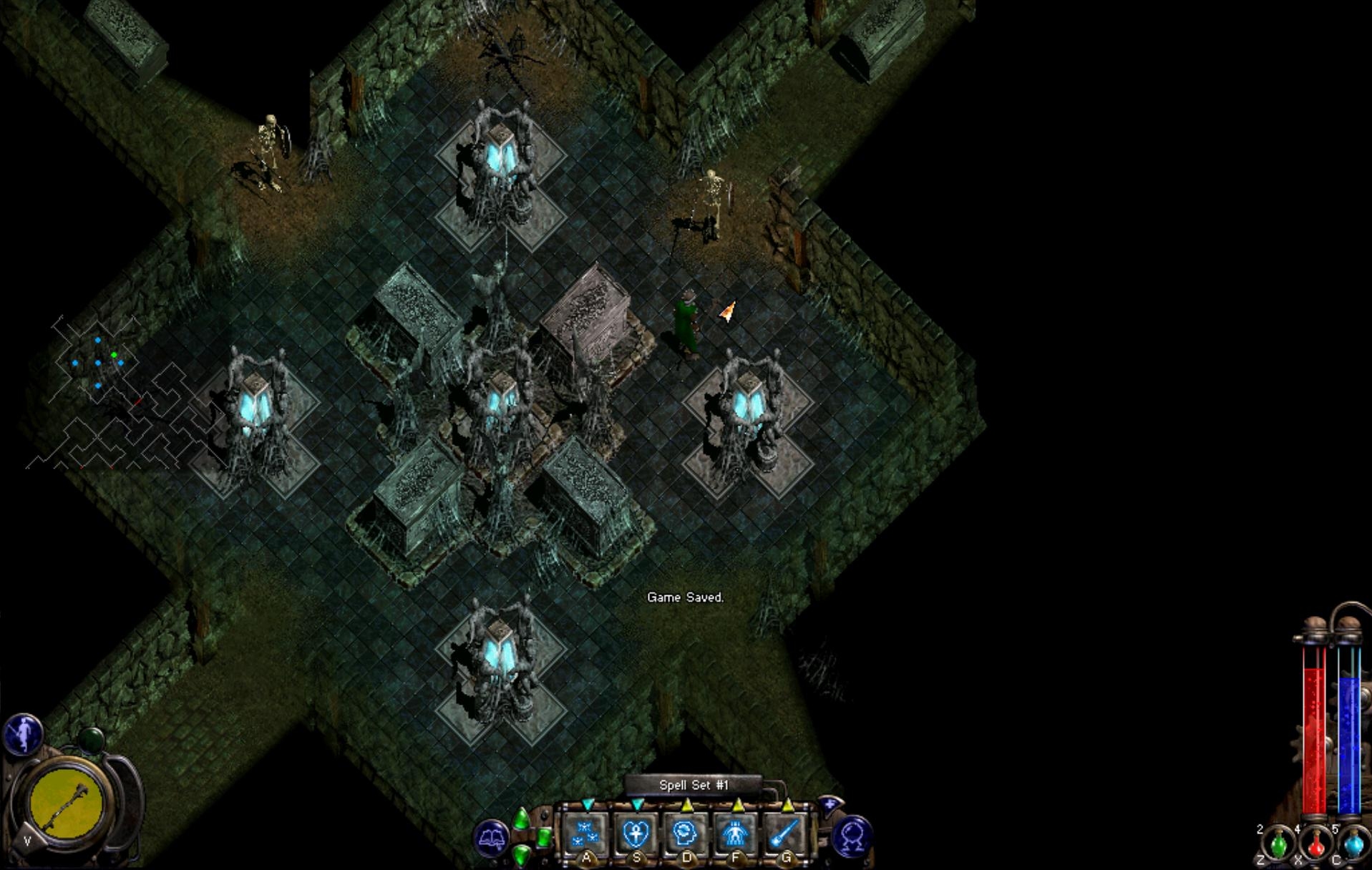 But there are so many ideas I love. I love that I can heal NPCs by turning my spells outward, or that mana recharges by standing near blue glowing walls and using this judiciously in battle. I really love the so-called "true sight" fog of war it uses, where your character can only see what's directly visible at any point. So stand near a window and you can see inside a building, but hide behind a dark corner and you're blind as to where the enemies might be. Why don't all RPGs use this? It's great!

Perhaps there's some sort of cosmic law that says if you're making a beat-em-uppy RPG, you're simply not allowed to include all the other ingredients that make games from the likes of BioWare feel so complete. Maybe it's to do with thermodynamics. I know that's a very legalistic system. But gosh, how is it that in the twenty years since Westwood's spare parts showed how some of the missing bits can be sensibly implented into the game, no one's ever thought to put all the bits together. An action-based, cheesy-combat RPG, that has missions and stories and people and relationships, along with skill trees, character development, and loot? It seems so obvious! I'm talking KOTOR or Dragon Age, but without all the fiddly (and fantastic) pause-based strategic combat, and instead with lots of manic clicking.

It's so interesting that Nox shows that a lack of emphasis on infinite loot doesn't take much away from the genre, and degrading equipment is much more interesting than the agony of choosing between ten thousand near-identical items you found under a tree. The whole game feels tighter, for good and for bad, a much more directed experience. 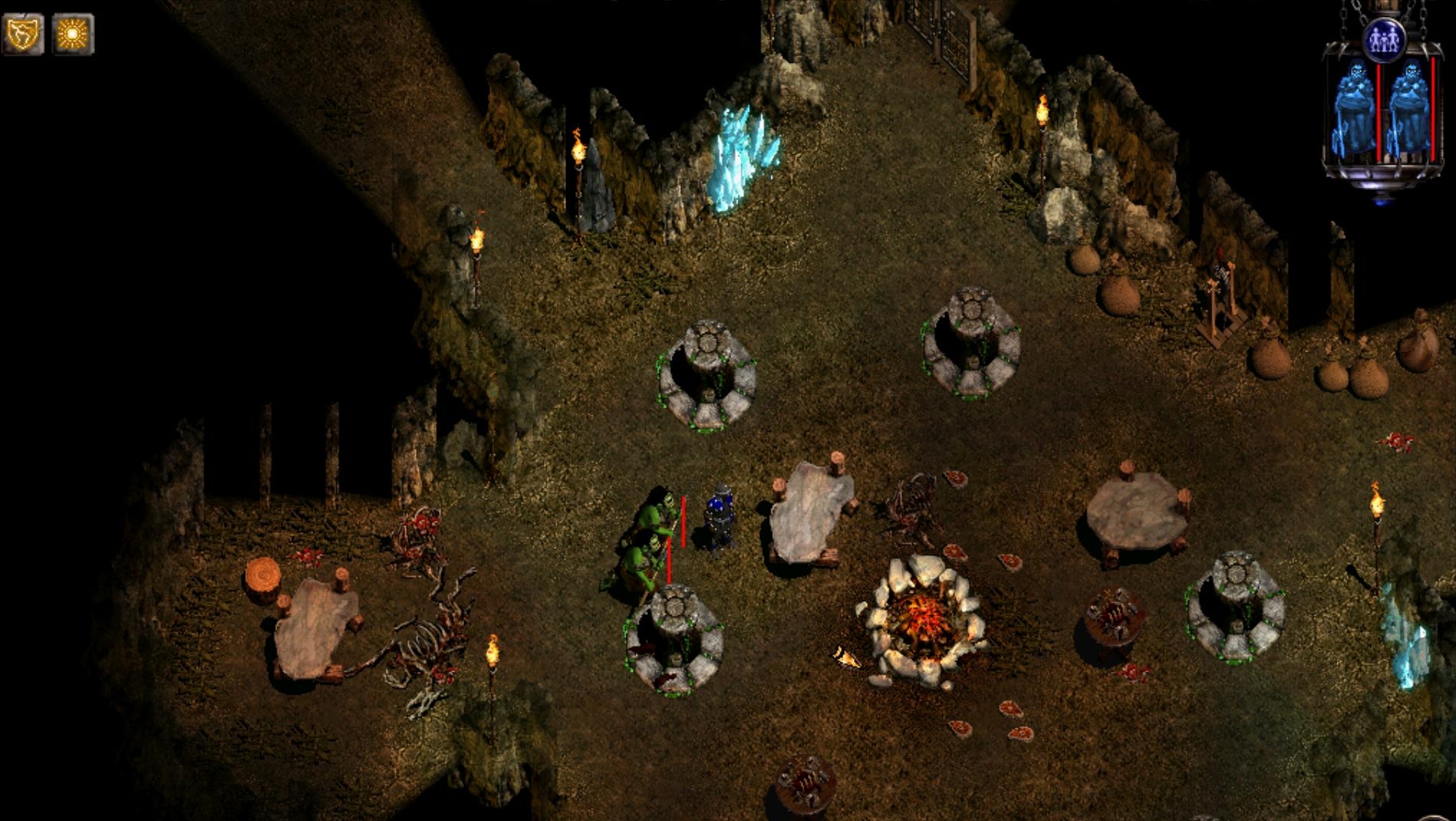 It's not aged wonderfully. But there are some unofficial patches out there that you're definitely going to want to get. In fact, the best option (despite those on forums claiming it can all be fixed with ini hacks) is from here. Click on "Main", and then choose "NoxSolution". That should get everything working properly when you dump the zip's contents into the game's directory. (Backing it up first is worthwhile, as it overwrites some files.)

If you want the original experience, there's a good chance you won't be able to run it at all at first. I, and most others, just get a grey screen. To get around that, you're going to want to set both game.exe and nox.exe to "Windows 98/Windoes Me" compatibility mode, and set "Reduce Colour Mode" to 16 bit. Then in game, set the resolution to 1024x768, 16 bit colour, and uncheck "Unlocked DX Surfaces". But honestly, even then you're going to get problems, especially with the cursor flickering, and no ability to task-switch. The patch fixes all of it, and is well worth it.

Even with that, this is still a bit fiddly, with chests tricky to catch with the cursor, and objects sometimes annoying to pick up. It's dated, but you know what, so have you over the last twenty years, so stop judging. 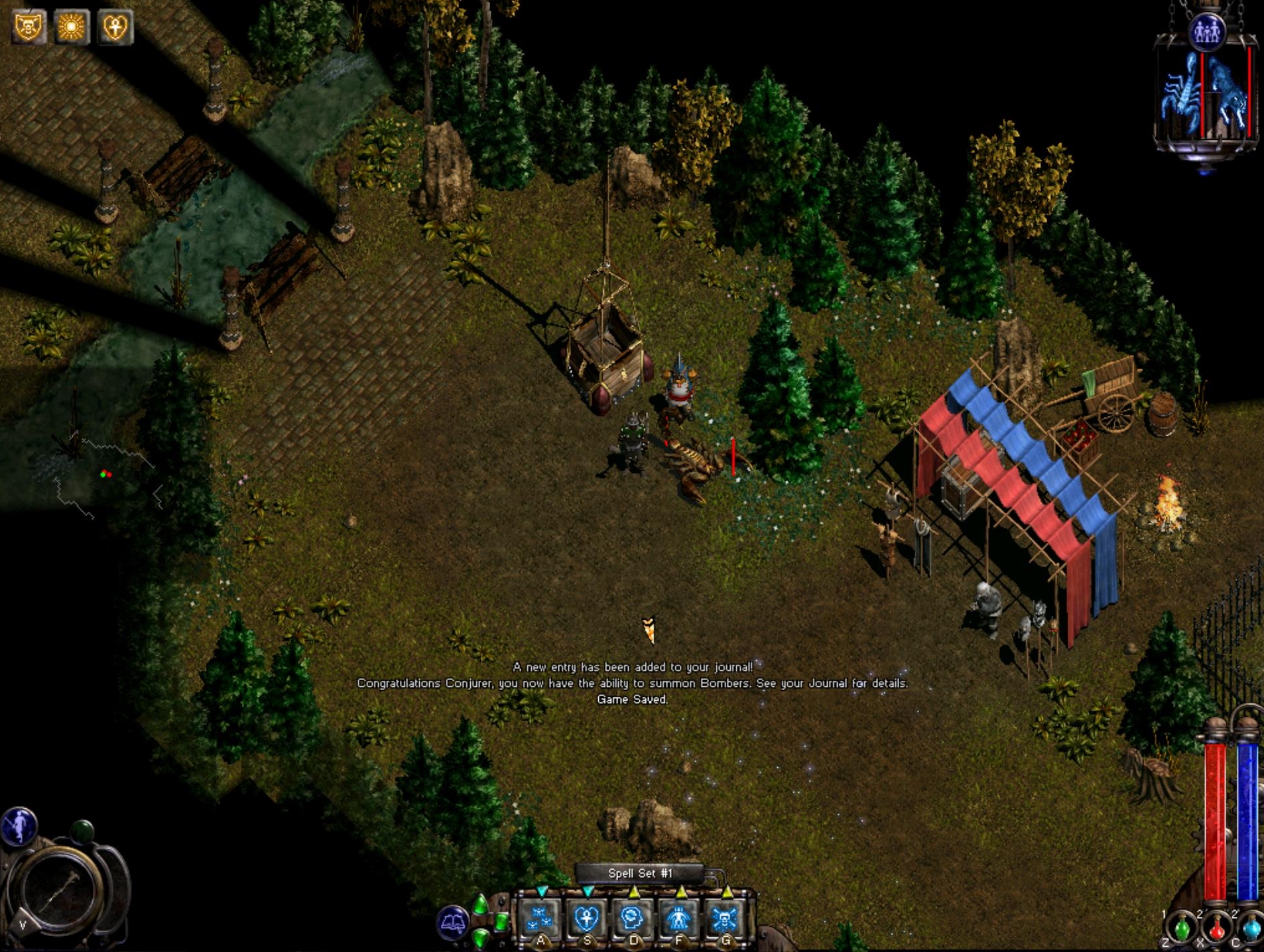 I'm really happy I found this, albeit so very late. It's the other potential side of ARPGs you just don't see. And I feel like it's a game that's been completely forgotten in all discussion of the genre. So stop that. Remember it. It's really interesting.

Can I still play Nox?

Yes you can, but you will need to patch it first. Silly GOG are selling a version that just grey-screens, but it's easily fixed.

Should I still play Nox?

I reckon so. It's not a Diablo-like, despite appearances. It's a something-else-like, and it's interesting purely because of that. Plus being able to bewitch creatures to fight with you is a lot of fun.