Playing Yume Nikki: Dream Diary is like sitting across from somebody as they explain their dreams to you in great detail. No. Worse than that. It's like listening to somebody describe an acquaintance's dreams in great detail.

Every now and then, they pause and say something along the lines of, “you had to be there”, as people do when they're telling a funny story that nobody is laughing at. In its transition from tiny sprites, abstract backgrounds and obscure free-form exploration to jerky 3d animation and side-scrolling running and jumping, Yume Nikki has lost almost all of its mysterious horror and charm.

The game begins with an assurance that the vision of original Yume Nikki creator, Kikiyama, has been treated with “profound respect”. It's an assurance that felt more like a warning to me, as if I were being told that no matter how I might feel about what I was about to play, I should keep in mind that it had definitely been made with the right intentions in mind.

Dream Diary didn't squander all those good intentions immediately, but it didn't take long for disappointment to creep in. And then disappointment stopped creeping and threw a little party, raided my fridge and has been sleeping on my couch all weekend. Dream Diary is like the modern remake of a favourite film that completely misses the point of the original. I was going to say it's Soderbergh's Solaris as compared to Tarkovsky's, but it's more like going to see a remake of Solaris and finding yourself watching Avatar. 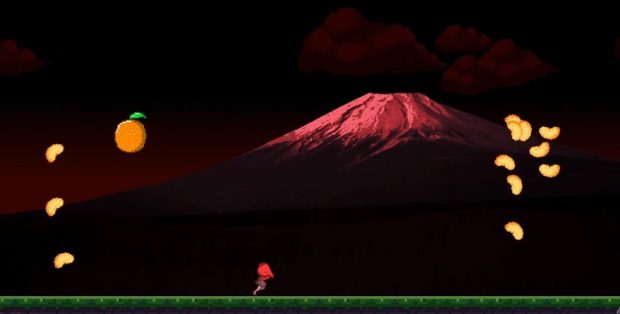 Structurally, it has something in common with the original, in that you spend most of the game wandering through dreams. Where Yume Nikki's top-down approach allowed you to get hideously and bewilderingly lost in large repetitive spaces, Dream Diary mostly just lets you run from left to right and occasionally from right to left. Fundamentally, you're still exploring and collecting items that allow you to advance further into each dreamscape, but you're doing so in a game that now feels like Inside or Little Nightmares without the interesting physics or environments.

After a brief introduction in which a dream sequence meanders for a while before turning to explicit gore and horror, you awake in your room. There, you can go to the balcony and take in the air, play a Pang-like shoot 'em up on your console, or go back to bed. Going back to bed leads you to a place with several doors, each of which takes you into a different dream world.

If you've played Yume Nikki, you may well recognise these worlds, but only in the way you might recognise a bootleg DVD cover for a much-loved film. It's not quite the restoration of Elias Garcia Martinez's Ecce Homo, but it's certainly very odd to see the fidelity and detail improved to such poor effect. It's not just that the lo-fi nature of the original's RPG Maker graphics allowed for broader interpretations than the more literal landscapes and characters in Dream Diary, it's that there's nothing particularly surrealist or dream-like about these new versions of old places.

The first world I visited saw me collecting coins, which were visible as sparkling points in the muddiness of the backgrounds. To the left, a character who wanted something from my empty inventory. To the right, a crate to push that creates a stepping stone across water. Once it's in place, a beaky little bastard hops across the screen and pecks me to death.

In another world, the school, I spent a few minutes trying to get past a section where jumping did not seem to allow me to pass an obstacle. Jumping is the only thing I can do – sure, there's an 'interact' button, but it doesn't interact with many things at all.

Eventually, I checked a video walkthrough to see if I could find out what I was doing wrong. I still don't know. When I managed to move past the section in question, I was repeating the same jumping action I'd tried the previous fifteen or twenty times. It is a Sisyphean dream in which the boulder or the gods eventually become bored.

I can't think of a reason to recommend Dream Diary at all. For fans of the original, it's lightweight, the worlds fewer in number (six total) and less expansive. And if you're interested in checking out the original but have been dissuaded by its appearance, this will just mystify you as to what the fuss is all about.

It's more like a proof of concept than a game, a riff on a cult classic which occasionally aims for fan-service but is mostly fan-disservice.

Yume Nikki thrives on its own obtuseness and obscurity, even now it has been dragged into the light somewhat. Dream Diary really does feel like a second-hand retelling of half-remembered and ill-understood nightmares, and I found my mind wandering on imaginings of its own to get as far as possible from these dreary dreams.

Yume Nikki: Dream Diary is out now for Windows via Steam for £15.49.