Happy Birthday the 'The Sims' series! You’re 20 years old today, which means you’re finally old enough to throw an old boot full of soup right at a cop’s head, and be totally immune to prosecution (seriously, it’s true! If you didn’t know about that lil trick, you should try it). You’re also old enough, apparently, to have released an unfeasible number of spinoffs, ports, add-ons and DLC packs over the years: I just checked out your wikipedia page to remind myself how many games had been released under the name, and had to have a little shout because I was so surprised.

I never really played you much, if I’m honest. I had some fun with your original instalment in 2000, but the only thing I remember doing is making a bloke called something like “Pete Strongman” or “Grief Wellington” or whatever, who lived in a grey cube just large enough for him to lift weights in 24 hours a day, while occasionally bursting into fits of racking sobs, or thinking about the army. Now I think about it, I basically delivered the definitive roast on incel culture, years ahead of time. Anyway, even though my only experience of the series was unwittingly creating Jordan Peterson’s soul 20 years ago, here I come with 10 ideas - one for every two years of your beautiful life - for what form the much-discussed Sims 5 should take.

Total conversation of the original Sims, but everyone’s got a strimmer for a head now, and so instead of communicating they just make a big mad whirring sound, and when they try to comfort each other with hugs they end up getting fully minced. All they can think about is strimming. Sometimes you see them crawling around on the lawn on their hands and knees, just to get their pathetic fix. A tragic fable. 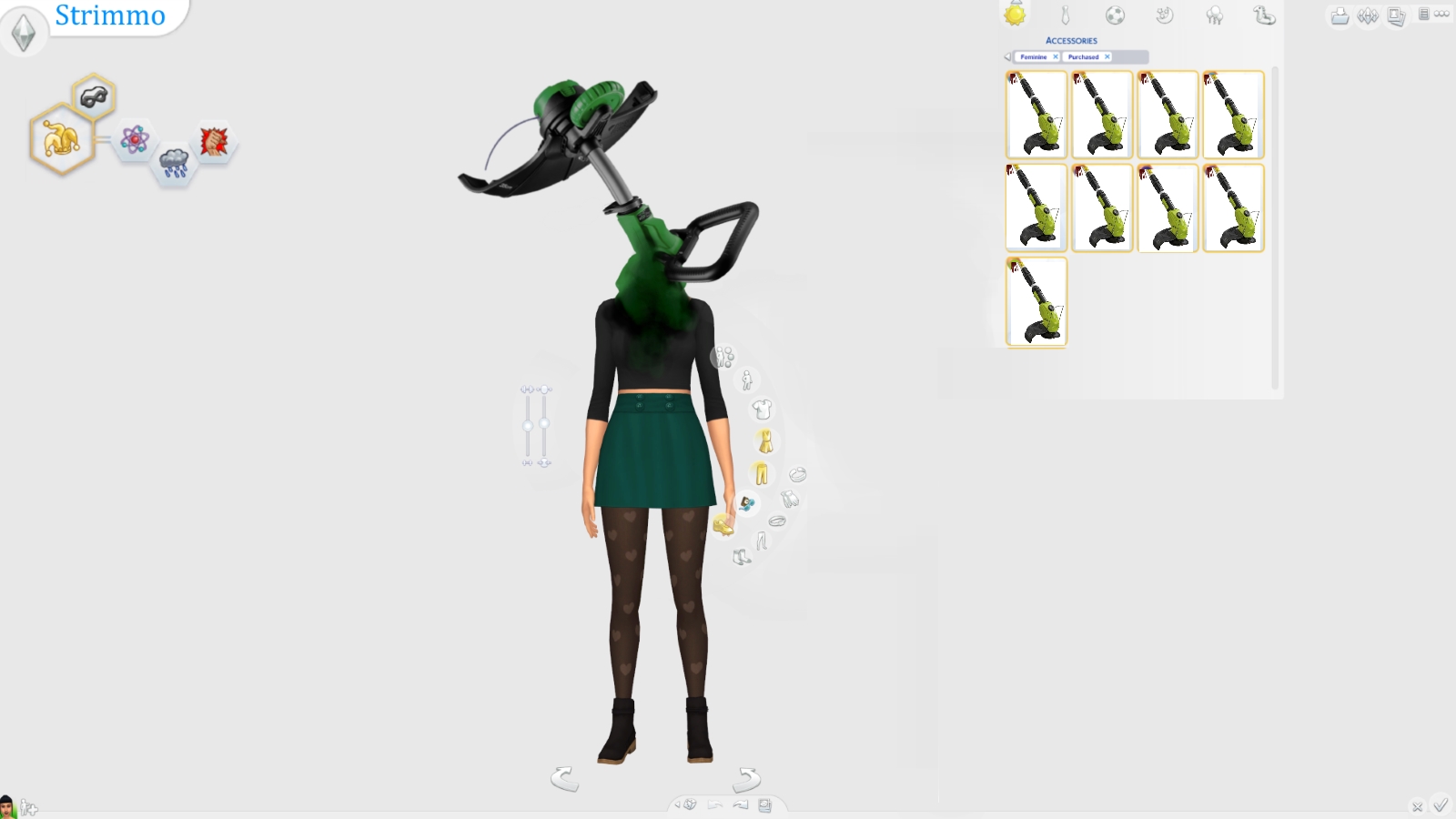 Eerie new take on the Sims formula where you boot up the game, only to find an unsmiling, cartoonish face staring through the screen, and moving a mouse around their desk. After a few moments, you find yourself irresistably compelled to eat a series of implausible meals, before finding your partner and waving your arms at them for one a half hours while shrieking gibberish. Later, you will construct an incomprehensible extension to your house, which contains only a pink sofa (facing the wall), and a medieval suit of armour. You will stand in that room, with the door locked, until you piss yourself and eventually die.

More of an expansion pack than a sequel, really. Adds a new residential world called 1st Century Italy, and adds costumes for Julius Caesar, Pompey, and the Roman Senate. Allows sims to cross the Rubicon river, precipitating the Roman Civil War and ultimately leading to the rise of the imperial era of Rome. New food, dance moves and music are also added.

In this one, your sims also have the ability to play the Sims, with even smaller and weirder sims. It gets really messed up when you realise that those smaller sims are also playing the Sims, and that you can load save games from any level of play. Just don’t forget which nested reality your saved game is in, or you’ll reach “the bottom layer”, where you zoom in on one of your sims’ PCs, only to see live footage of the back of your own head, as the Christopher Nolan foghorn noise plays in real life. 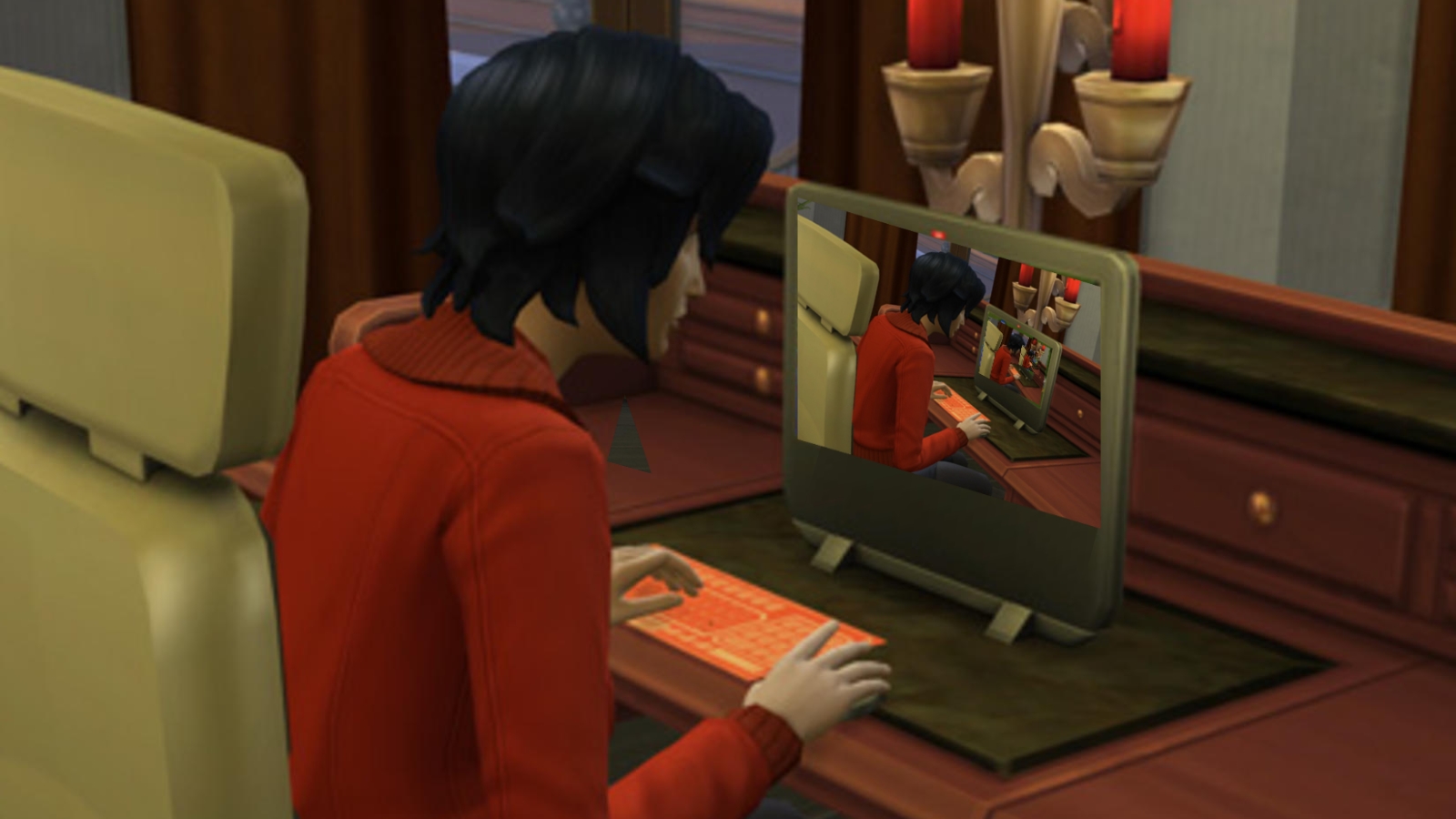 Sims game set in the golden age of 19th Century whaling. Features asymmetric multiplayer where several friends can control a ship’s crewmembers, but there are also whales, which are controlled by reinforced PCs in the common rooms of Russian prisons. Also the prisoners can swear at you through a microphone, and if you die in the game you die in real life.

Control the lives of a bunch of hyper-attractive, emotionally intense mech pilots, as they go about their daily lives in a futuristic megabarracks, occasionally roared at (inspiringly) by Idris Elba. Every now and again, gigantic shark-faced monsters from the Creature Design Dimension come out of the sea to kick over buildings, at which point your pilots jump into their skyscraper-sized shitkicker robots, and the game zooms out to its second mode, a kaiju combat game controlled via the classic Sims interface.

In this game, you’re a bright-eyed american college student, enrolling in a school for wolves. You think it’ll be furries or talking animals or whatever, but no: just wolves. Big, lean, hungry things from the frigid blackness of some godforsaken canadian wilderness, rammed by the dozen into every room going. Even the dean’s just a wolf. In fact, there’s not even a school. It’s just a desolate forest, packed with starving wolves. Enjoy. 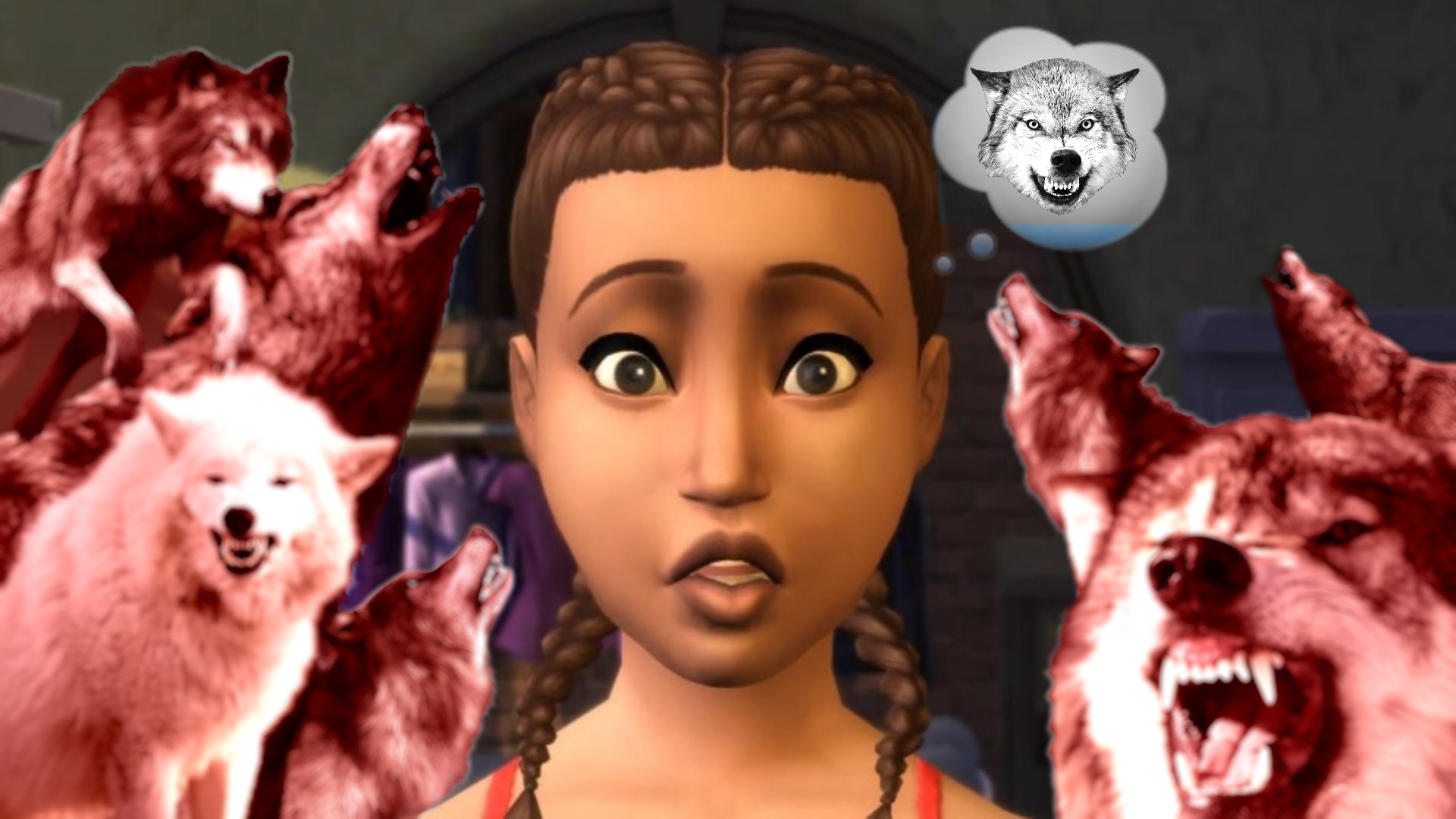 Like the Sims, I guess, but your sims are being held under a false arrest by a roaring cockney, and forced to exercise around the clock in a derelict east london warehouse where he also breeds fighting dogs. There isn’t even proper gym equipment either, so your poor pretend people are forced to lift buckets of paint on the end of ropes, while a purple-faced pub monster in a stained vest leans into their face and hisses appalling swear words in fully comprehensible english.

9. The Sims: Warriors of the Ant-Faced God

Looks like it might be an expansion pack at first. That’s what you’re meant to think, anyway. Adds a new destination world called Formicaria, which is a sort of 80s fantasy underworld, ruled over by a muscular man with an ant’s head, called Gak the Unstoppable. Allows sims to become Sweating Barbarians, and find enchanted broadswords in bins. The game morphs gradually into a lurid arcade sidescroller, via imperceptibly small incremental changes, over the course of a week’s play.

In a clever twist on the recent ‘Tiny Living’ expansion, you’re not making massive houses (as you might expect), but controlling a massive person, as they struggle to live at such an unfathomable size. I mean properly enormous too, like the bloke off of ant man when he goes mega in Avengers Aubergine War. Only this is even more realistic, because as soon as you load the game up, your sim’s shins snap under their titanic mass, and the tragic giant collapses through half a suburb, before slowly asphyxiating while thinking about fashion or burgers or whatever. 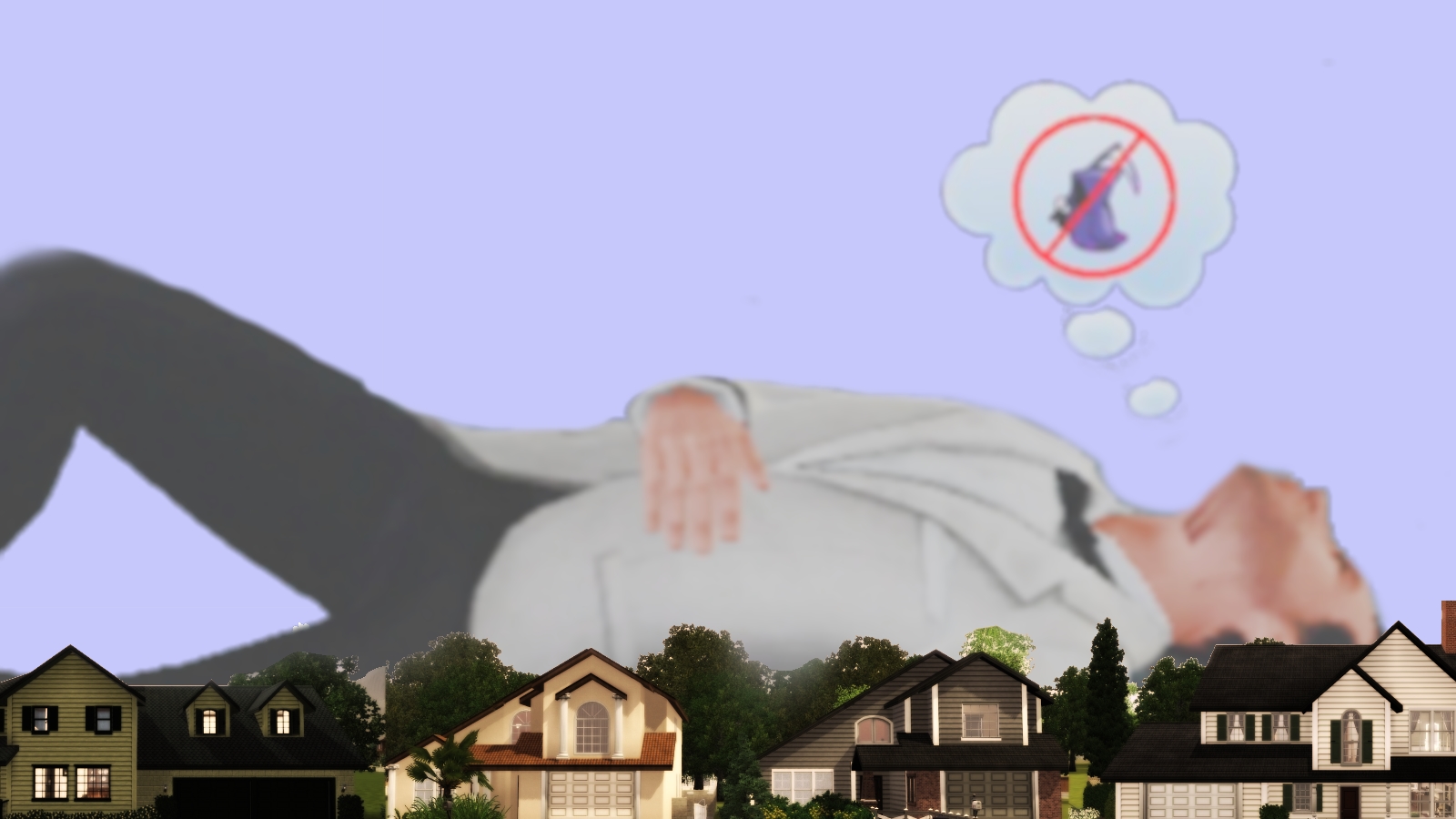