I love a great 1920×1080 gaming monitor as much as the next person, but personally, I’ve always been more of a 2560×1440 kinda gal. The problem is, my current best gaming monitor recommendation for 1440p is the increasingly scarce MSI Optix MPG27CQ, and I’ve been desperately trying to find a replacement for it all year. BenQ’s EX3203R came close, but was let down by its pants HDR, while AOC’s Agon AG322QC4 had good HDR but slightly underwhelming colour accuracy. I also liked AOC’s Agon AG273QCG, but for some reason AOC put a horrible grainy finish on its curved TN panel, which ended up spoiling the whole thing.

Finally, though, I think my hunt has come to an end with AOC’s Agon AG273QX. This is the flat AMD FreeSync 2 HDR sibling of the curved, Nvidia G-Sync AG273QCG I just mentioned, and honestly, I feel like Christmas has come early. Not only does this 165Hz VA monitor have excellent colour accuracy, but there’s no grain, its HDR is pretty good and it plays nice with Nvidia graphics cards as well. What more could I possibly want?

Let’s start with that colour accuracy. Just like AOC’s superb 24G2U that I reviewed recently, the Agon AG273QX can be used pretty much straight out of the box, no faff required. On its default Standard eco mode and Warm colour temperature settings, my X-Rite i1 DisplayPro showed its VA panel was already displaying a practically perfect 99.6% of the sRGB colour gamut, and an impressive 87.9% of the HDR-grade DCI-P3 gamut as well – which is pretty much identical to what the MSI Optix MPG27CQ offers. 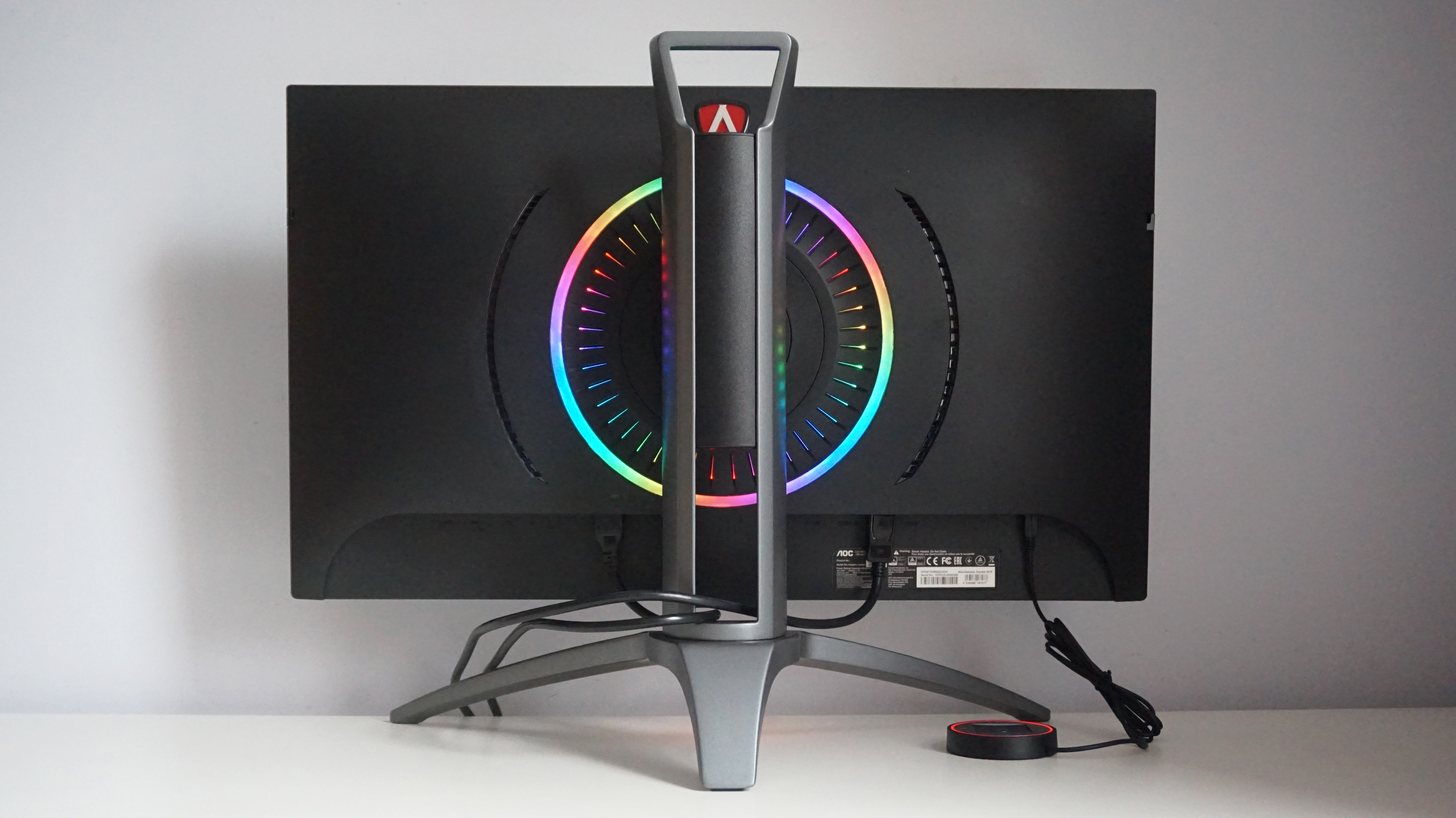 Like the Agon AG273QCG before it, the AG273QX has a ring of RGB lighting on the back, but you can, as always, turn it off if you wish. The hole in its wider stand also acts as a much better cable tidy as well.

The latter isn’t as quite high as I’ve seen on other HDR displays, I should add, as many of the very best HDR displays must hit at least 90% of the DCI-P3 gamut to earn their respective VESA DisplayHDR certificates. The Agon AG273QX is only rated as a VESA DisplayHDR 400 screen, which is the lowest HDR standard and doesn’t have any DCI-P3 requirements, but 87.9% is still pretty darn great all the same. Indeed, I’ve seen plenty of DisplayHDR 400 screens with worse DCI-P3 scores, and the fact it’s that good out of the box is even better.

What you need to know in order to find the best gaming monitor for you and your budget:

Indeed, when I switched over to the Agon AG273QX’s User colour temperature mode to see if I could improve on those scores, I only managed a 99.5% sRGB result and a DCI-P3 score of 87.6% DCI-P3. As such, you don’t need to spend ages fiddling about with the monitor’s menu settings, as it’s pretty much perfect as it is.

I was also pleased to see a lovely high contrast ratio of 2889:1, as well as a low black level of just 0.15cd/m2 on the AG273QX’s maximum brightness setting (the closer to 0.00cd/m2, the better), the latter of which topped out at around 460cd/m2. Again, a peak brightness of 460cd/m2 isn’t as high as other HDR monitors out there (or indeed some non-HDR screens), but for everyday use it will do you just fine – if anything, that kind of brightness is too much for staring at for long periods of time, and I usually had it turned right down to around 20% of its max brightness for most of my testing. 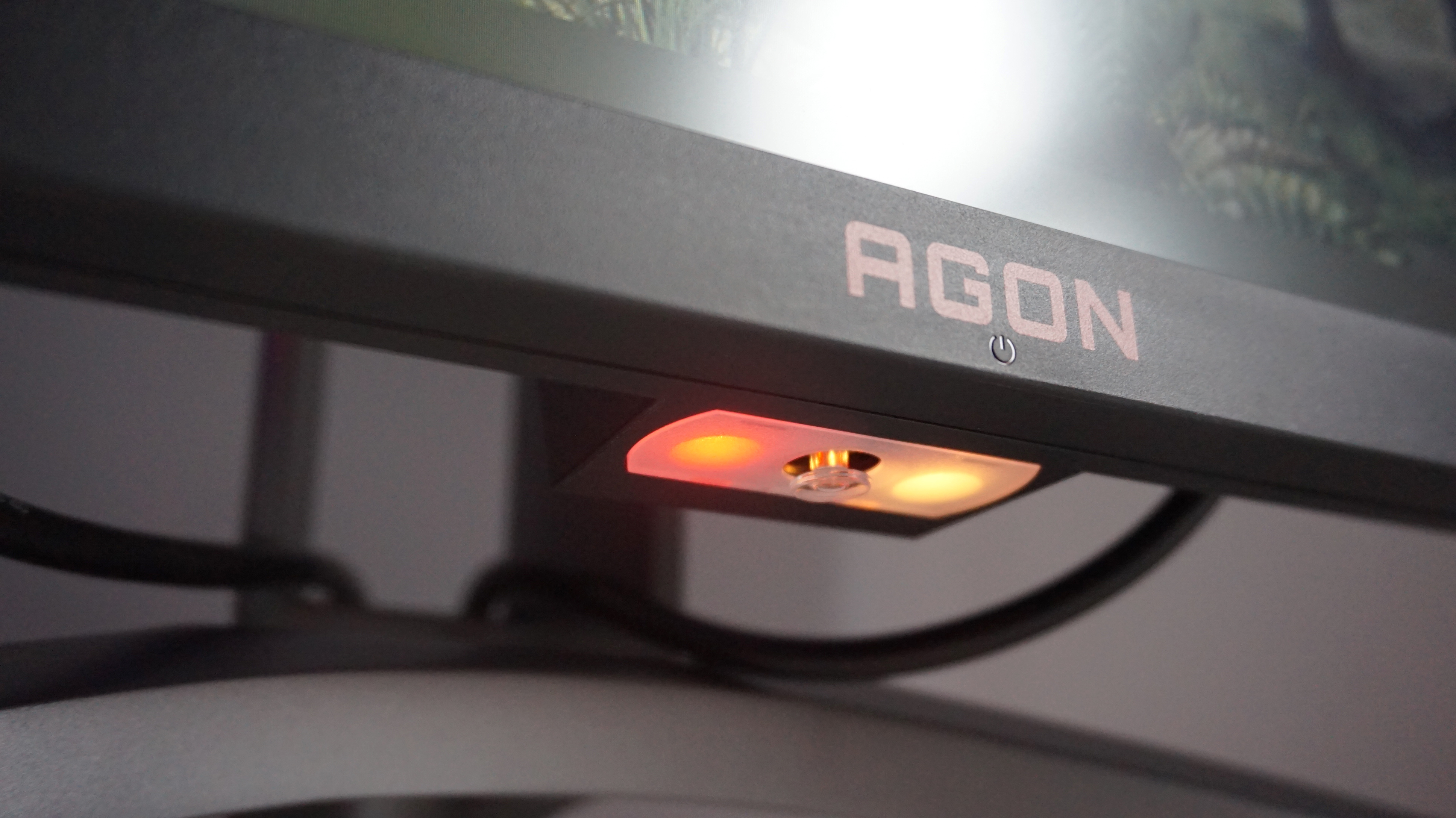 The AG273QX’s onboard menu system can either be controlled by its central, four-way analogue stick (pictured above), or a plug-in control disc (below). The analogue stick can feel a bit flimsy at times, but at least it’s fairly intuitive to use when you do need to go into the menu settings for something. 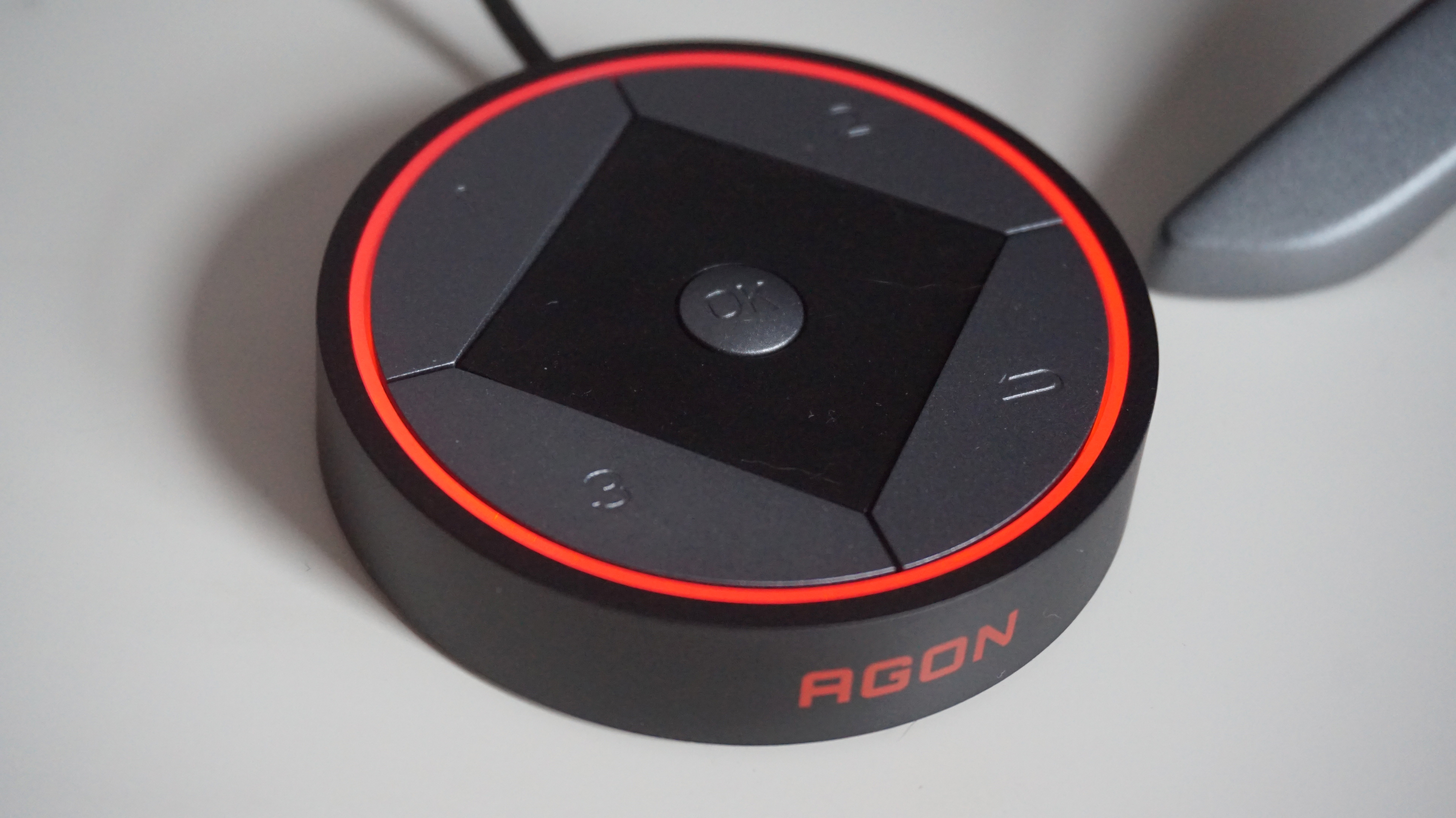 If you don’t mind having another ‘thing’ on your desk, the AG273QX’s additional control disc not only gives you more controls for accessing its main menu, but also three shortcuts to its customisable Gamer profile modes.

Still, you’ll want to crank it back up when you come to use its HDR support, as anything less than 100% robs it of its high dynamic majesty. I must admit, I had a couple of teething problems getting its FreeSync 2 HDR to work properly in Assassin’s Creed Odyssey and Final Fantasy XV when I first tried testing it with my Radeon RX 5700 XT graphics card, but once I’d enabled Windows 10’s HDR settings, everything went a lot smoother.

Final Fantasy XV automatically registered it as an HDR display, and switching on Assassin’s Creed Odyssey’s special FreeSync 2 HDR option worked pretty much instantly – which is a welcome relief after all the fiddling I’ve had to do in the past on other FreeSync 2 HDR monitors. Indeed, much like the enormous Samsung CRG9, this is one of the few FreeSync 2 HDR screens where I’ve actually felt, “You know what? This does look better in HDR,” which isn’t always the case.

As I mentioned earlier, a sub-500cd/m2 peak brightness is comparatively low for an HDR monitor, and thus the impact of its HDR in-game was noticeably less inspiring, say, than the jaw-dropping CRG9 (which can hit a whopping 1000cd/m2). Still, VESA’s DisplayHDR 400 standard is pretty common among 1440p monitors these days (especially FreeSync ones), and you’d have to pay a lot more to get a monitor that meets VESA’s brighter DisplayHDR 600+ standards.

As a result, I’m not too bothered by the fact that it can only do around 460cd/m2 brightness, as it’s still by far the best and easiest-to-set-up 1440p FreeSync 2 HDR monitor I’ve tested in ages. 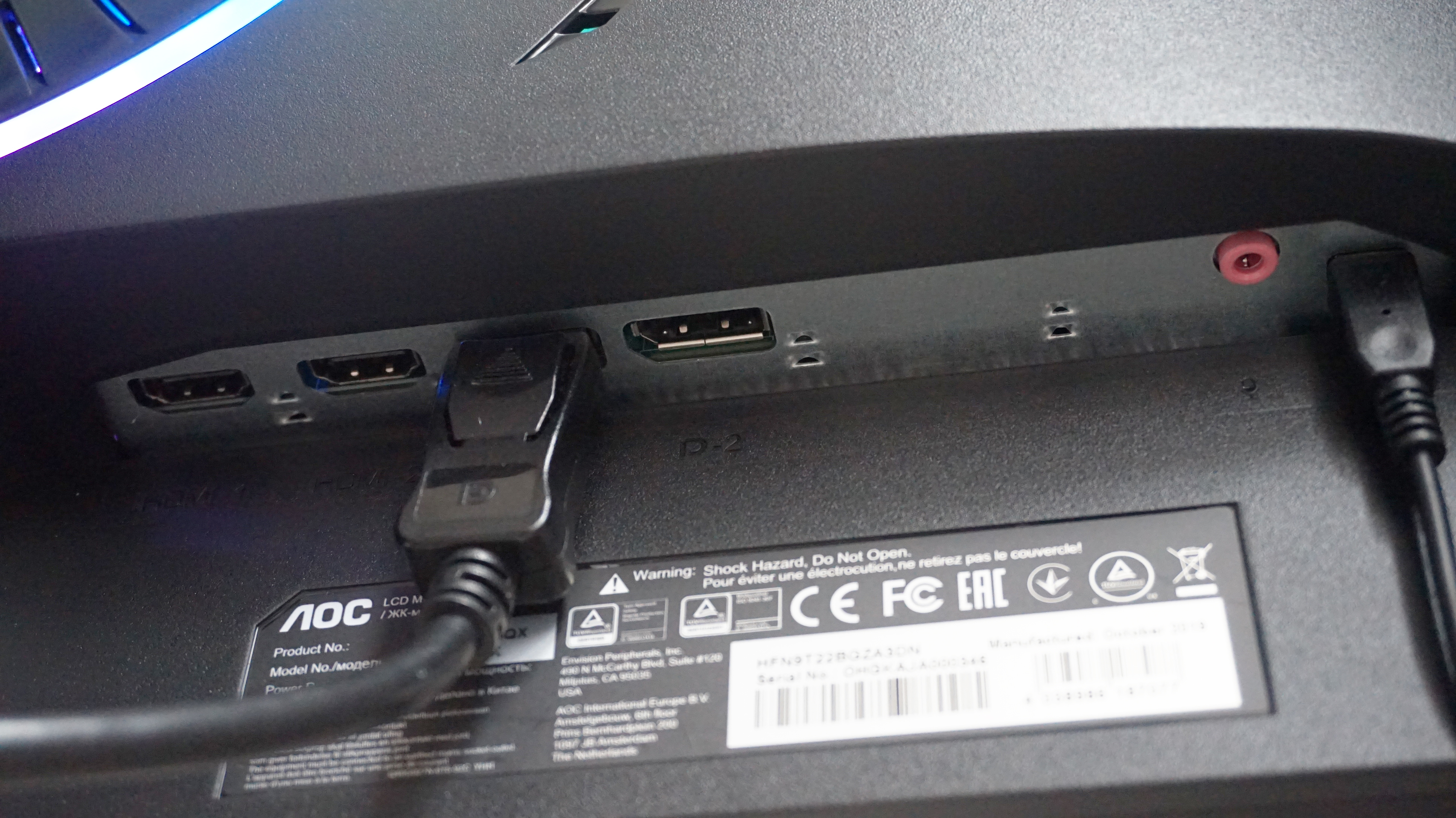 The AG273QX comes with plenty of ports, too, including two DisplayPort 1.4 inputs, two HDMIs – and, as you can see below, four USB3 ports and separate headphone and audio line in jacks. 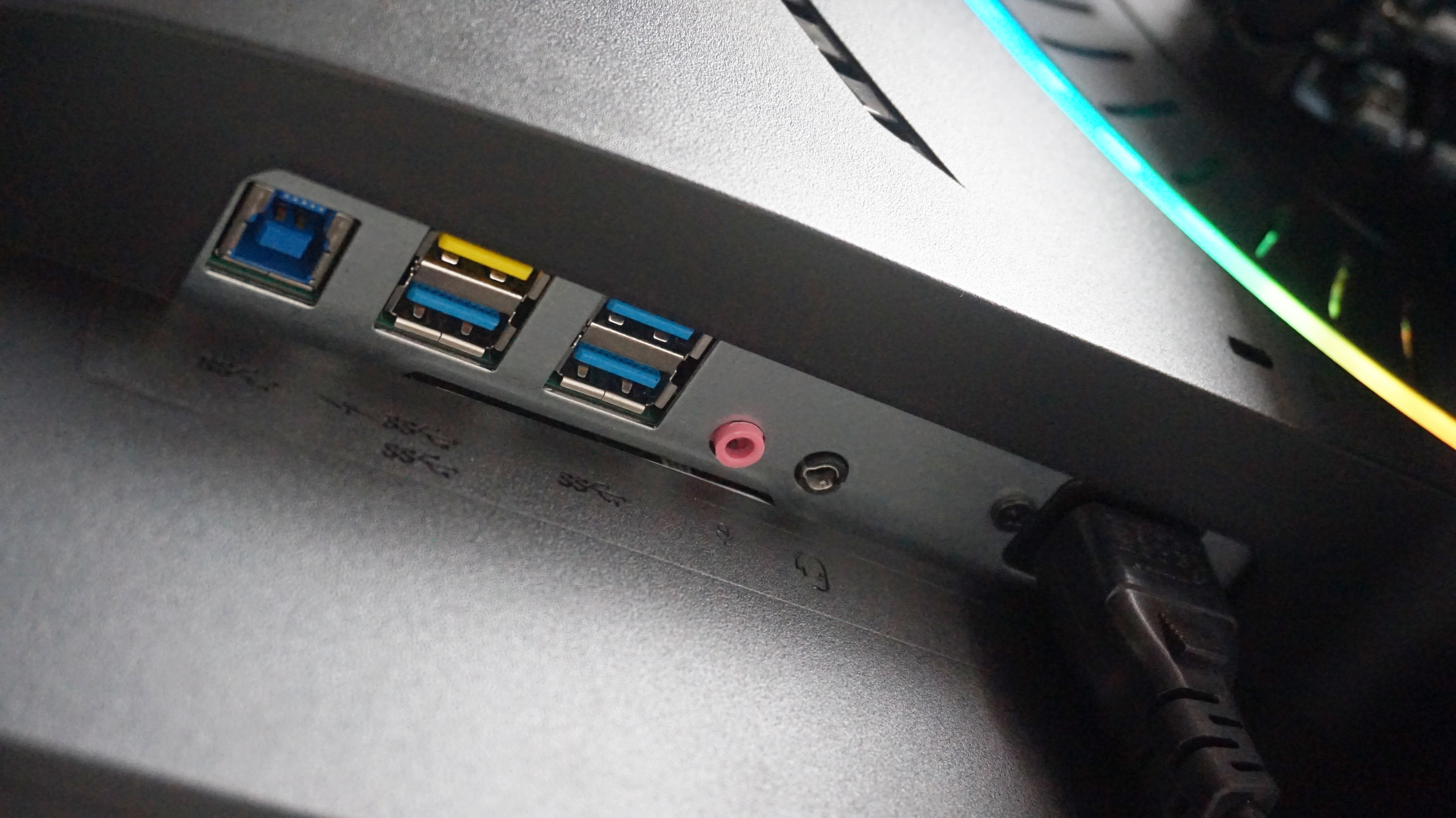 Plus, its HDR and regular FreeSync tech (the variable refresh rate gubbins that helps keep games looking nice and smooth with no tears or stuttering) works just fine and dandy with compatible Nvidia graphics cards, too. Obviously, you won’t be able to take advantage of any FreeSync 2 HDR-specific features like there are in Assassin’s Creed Odyssey on an Nvidia GPU, but I was still able to use the game’s regular HDR options to great effect on my RTX 2080 Super card.

Similarly, it may not be one of Nvidia’s officially sanctioned G-Sync Compatible monitors, which guarantee an almost-G-Sync-grade experience when it comes to taking advantage of a monitor’s variable refresh rate tech for smooth, tear-free gaming (yet, anyway), but when I was gunning through a round of Doom at the monitor’s top refresh rate of 165Hz, everything looked super smooth regardless. I didn’t see any signs of screen tearing or any of the other defects that sometimes occur on screens that haven’t passed Nvidia’s official testing procedures, such as blinking, pulsing or strange colour variations, so those after a high refresh rate 1440p monitor shouldn’t have any qualms about plumbing for the AG273QX regardless of what type of graphics card is currently sitting inside their PC.

All in all, then, the £400 / $407 AOC Agon AG273QX is a fine 1440p monitor indeed – and given how our MSI incumbent is becoming increasingly hard to find these days, doesn’t support HDR and only has a maximum refresh rate of 144Hz, I’m also proclaiming the AG273QX our new top pick for 1440p in our best gaming monitor rankings.