Brendan: Infantry! Ready your shields! Okay, move to– hang on. Sin, why is your shield not readied? We are trying to play the multiplayer in Mount & Blade 2: Bannerlord, so we can pass a substantial sneer or cheer in its direction, and you have not even readied your shield. It is wholly unreadied. Explain yourself! 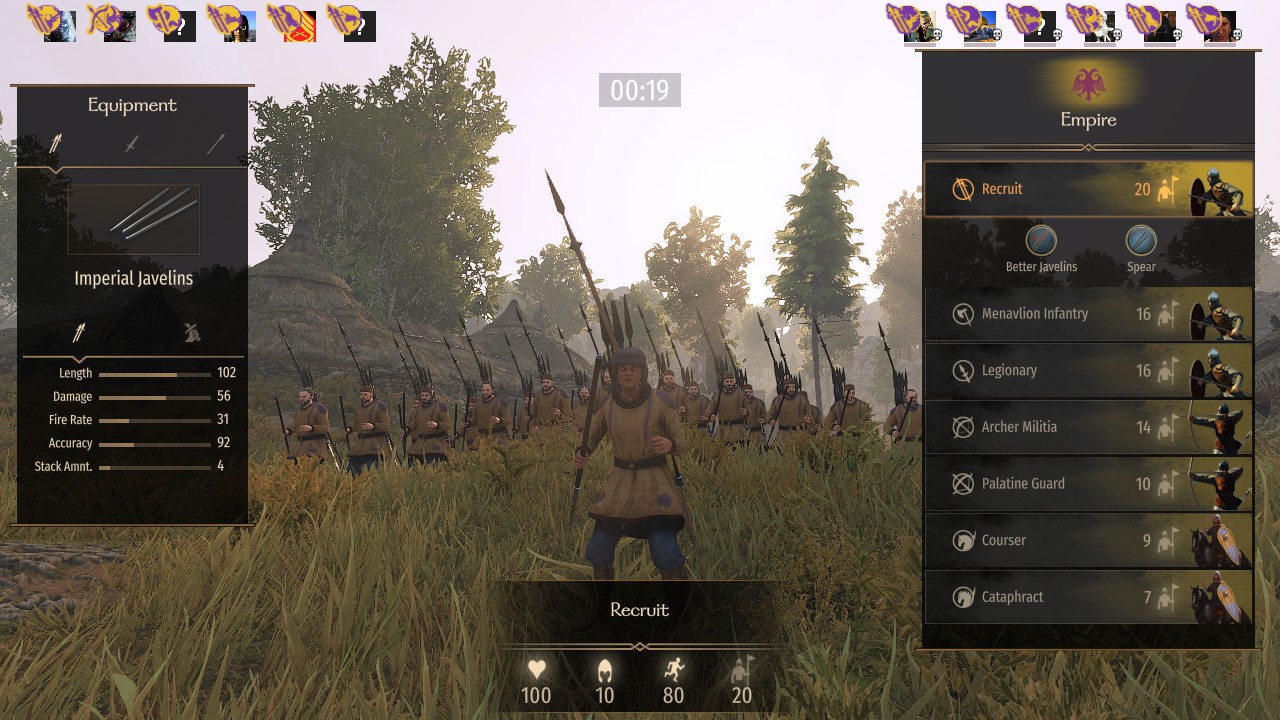 Soldier classes and loadouts offer a good balance between simplicity and variety.

Sin: Probably the worst thing I can say is that it kept crashing. Which is frustrating because for all my moaning about Bannerlords’s technical problems at launch, crashing was the one I didn’t experience. But it was frustrating precisely because it kept falling over just as I was starting to have a great time. Even if it’s very hard and I am even worse at it than I expected.

Brendan: It was okay on my side. The joys of PC multiplayer. Let me explain to our peasant readers what’s on offer. There’s big old team deathmatches, attacker versus defender sieges, and captain mode, in which players get a bunch of computer-brained troops to help capture points.

Sin: The structure of those modes is the key log, I think. The lack of information on what’s going on can be overcome by accepting that you’re new. You will be lost, confused, and repeatedly stabbed to death by screaming hairy men for a while before you know what you’re doing. But apart from captain mode, the contests on offer felt disappointing. Siege mode feels like a too-sprawling control point game. And in team deathmatch, everyone spawns randomly all over the map, so there’s little room to do more than play dodge the horseman and hope people coalesce around you.

Brendan: I did get strong Call Of Duty flashbacks. Spawn, die in four seconds, spawn, die in seven seconds. Being in medieval times is awful. 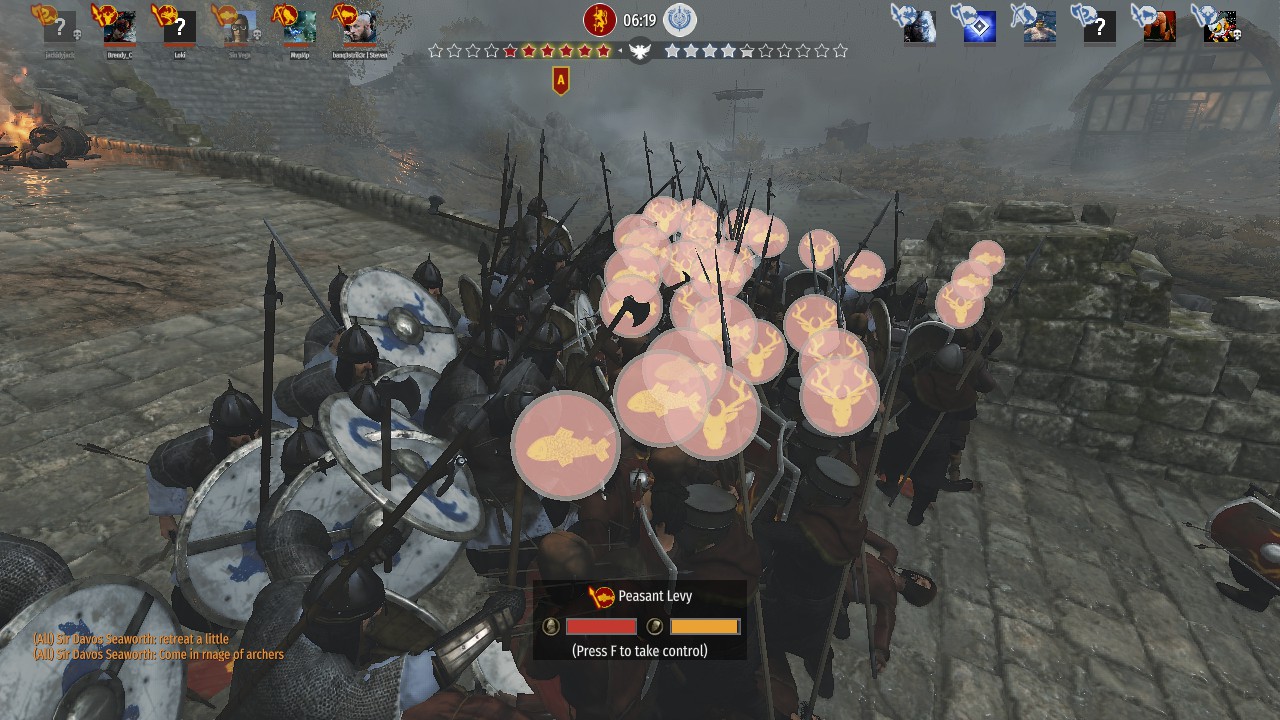 I did not expect to win this one. It was brilliant.

Sin: I liked the bit where I tried to talk and you quietly replied “I can’t hear you because everyone’s shouting. All of the men are screaming”. War is shouty. But I mean, you’re gonna die a lot. Even if you’re good at it, you’ll mistime a swing, you’ll fall for a good feint. There are stray arrows, there are sneaky militiamen bashing you from behind, there are horse cowards. It’s fine, and a medieval fighting game would frankly be weird without that. But the structure could do more to mitigate it.

Brendan: When you say “horse cowards” we should clarify for the herdsfolk at home that these are the heroic tramplers who charge about, professionally dispatching anyone caught in the open. It is like playing Frogger in the middle ages.

Sin: My head was on a swivel. Paranoid and twitching at every hoofbeat, half of which are on your side, so even your ears can’t be relied upon. If you stop spinning around looking for horsemen in team deathmatch, one will warp into existence behind you with a lance already lined up for your squelchy bits. It is rough. 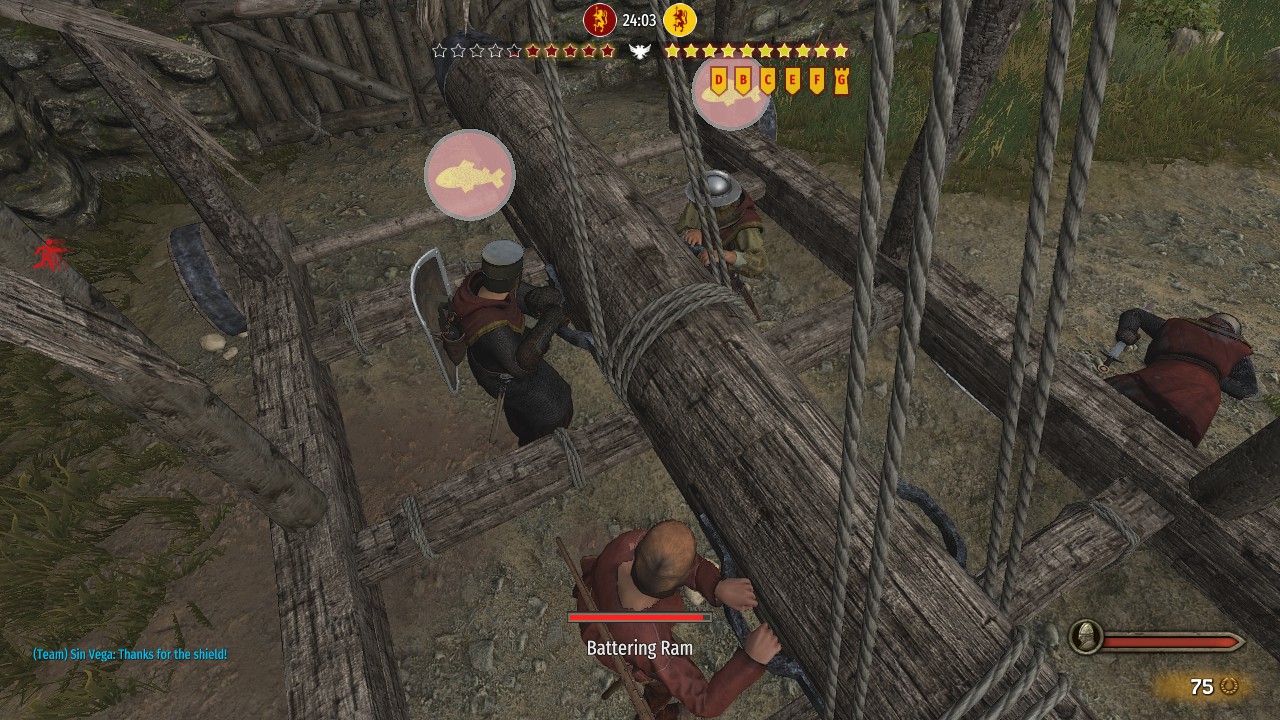 The random with the shield was a champ. Protected us the whole time. Shame we lost.

Sin: Horsey filthmen aside, I like how much of the fighting is about outsmarting people. I’m still far too bad at the basics to get to that point, but it’s clear that outmaneuvering and tricking people to get under their block is important. Because the engine is geared for massive singleplayer battles, the melee is less complex and nuanced than Chivalry’s or Mordhau’s, but those low-level mind games are still big.

Brendan: I feel the biggest problem for the vanilla deathmatch and siege modes is exactly that: Mordhau exists. It’s the same fantasy, packaged in a neater box, with extra silly stuff for people who are not great at sword-swinging. I was as bad at stabbing eyes in Mordahu as I was hurling spears in Bannerlord’s skirmishes. But at least in Mordhau you can play a lute, you can be an engineer and spend the whole match putting up anti-horse spikes. There’s a lot more variety, which makes B-lord feel a bit dusty.

Sin: Yep. If you directly compared the physical swinging and poking, Matt would laugh in your face because Bannerlord definitely can’t take Mordhau or For Honor blow for blow.

Brendan: Buuuuut. It does have that captain mode. Which is something the others don’t, and which is the most loyal to the feeling you get playing single player battles. It’s you and 10-15 men, alongside a bunch of other mini-commanders with their own squads. You have to shout and strategise a bit. Advance! Shield wall! Square formation! Stop dying! You know, military stuff. That’s where the teamwork and the structure you’re craving is, I think. Well, maybe not “structure”. It is still often total chaos out there. 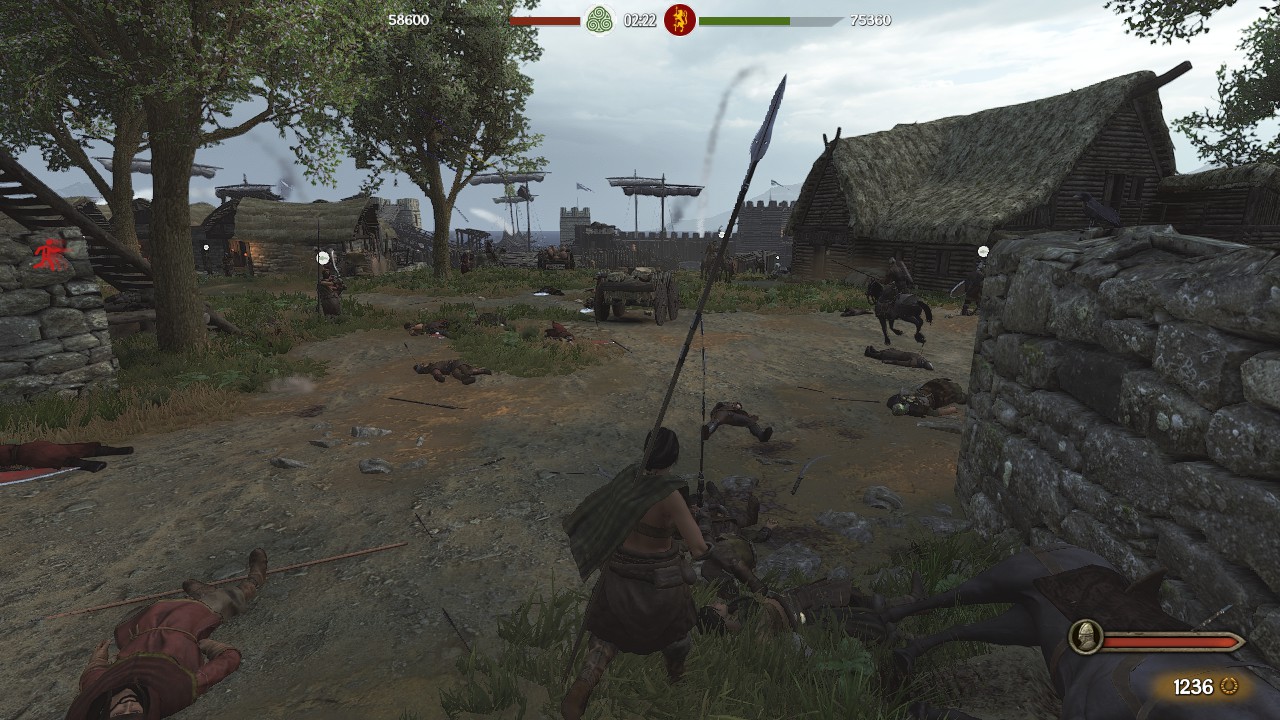 Deathmatches are all the more shapeless and dissatisfying after playing with an army.

Sin: It’s a chaos I felt less powerless against though. Your mooks shield you, literally and figuratively, so you’re less exposed to the instant deaths that take away the momentum from the other modes. A poor fighter can still feel useful when there are AI clods to beat up. And while a skilled stabby player will win if all else is equal, it’s got that shot of tactics that you need from a pitched battle, rather than a field full of scattered dudes attacking random people. Captain mode is definitely its strongest suit.

Brendan: Yeah, a medieval warfare liker can get more deeply into the idea of composing a strong team, for instance. I remember one game, where we had a bunch of peasants under your command. Oh no, I thought, peasants go down easy. They stink. But then I realised you get more soldiers in a povvo-squad than, say, a heavily armoured vanguard. In theory, you and four friends could field an entire army of peasants against your foe, and just gamble that numbers will win.

Sin: Peasant squad was amazing. I got completely carried away. After half a round of staring at the enemy from across the map, it was exciting to march over with your sergeants behind, online randoms supporting us both, and then issue that charge order at the last moment. A big scrum on the bridge, at a spot they’d chosen to defend and us to attack, not just wherever the AI happened to spawn. And somehow my brave farm hands tipped the odds.

Brendan: It was very exciting, and if I remember right, the only game we outright won. Peasants rule.

Sin: It was, honestly, a bit of a blur. Especially when I realised that it’s an Azazel mode: after you die, you can possess one of your surviving mooks and fight on as them. I believe that was when I started cutting armoured men down with a pickaxe and yelling “FUCK THE LANDED”. 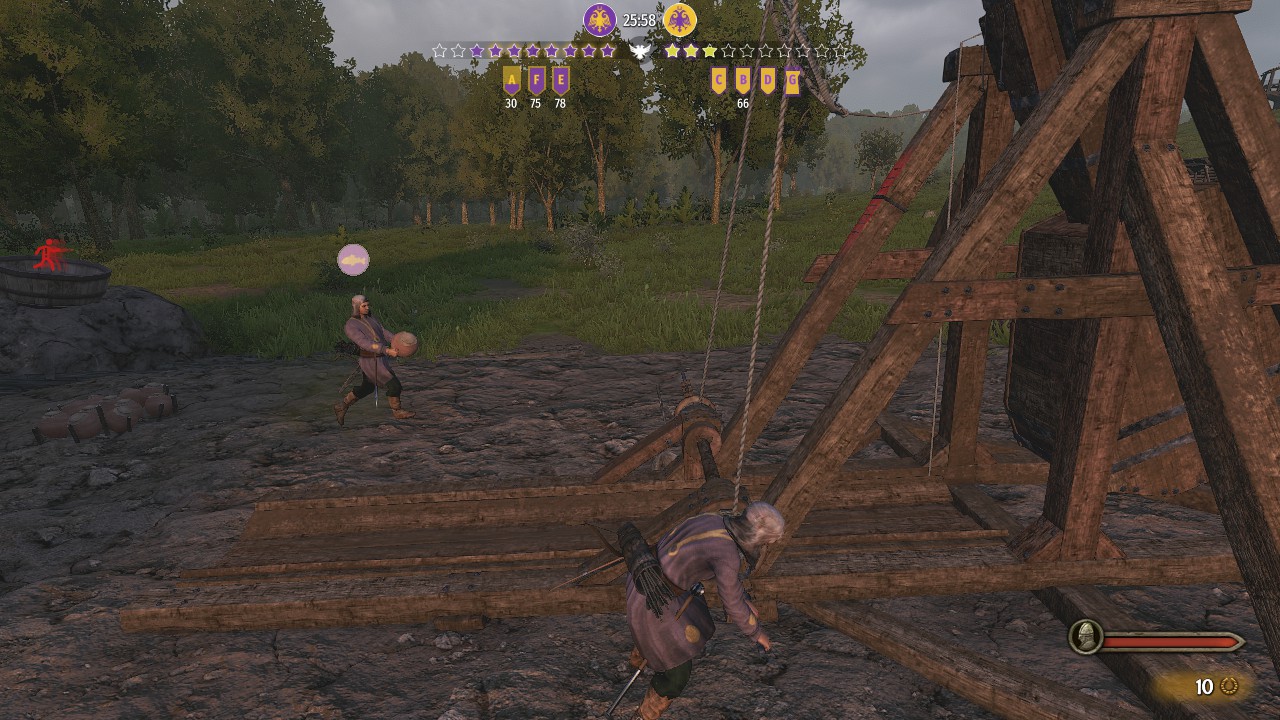 This is here purely for Brendy’s amazing stride. Making my way downtown.

Brendan: An emotional moment for all of us. This is an early access boyo, so perhaps we shouldn’t give it a total drubbing over missing features. But one thing we both agreed on while playing was: this needs a bloody map. The levels are big, open killing fields, labyrinthine castles, confounding townships. It was hard to know where our objective was (the capture points and so on). And impossible to tell where your own partied-up friends are. We had to find each other by yelling out our locations, like we were on the phone and looking for each other in the same airport. “I’m down in the market. Under the bunting. No, the other bunting.”

Sin: Especially in siege mode, which already has a pre-match period while waiting for latecomers. In captain mode, it’s easier to see a formation of archers moving somewhere and join them, but in siege mode there’s little coherence without a map. When we spent two thirds of a match pushing a battering ram under fire, we still got pasted even though we breached the gate.

Brendan: That was one of the more fun games, but it was totally down to us inhabiting that role. Relishing every crossbow bolt to the face with suicidal glee. See also the five minutes we spent role-playing as trebuchet operators.

Sin: One skillo crossbowman with 2,000 hours of experience can memorise the angles and paths needed to singlehandedly decimate the siege engine. I can’t see a way to beat that beyond attrition, which didn’t work for us, or doing the same back to him. And then you’re just having a deathmatch again. I loved following the trail of our own dead bodies to rejoin the ram, though. It was a fun round, but would you do it again? 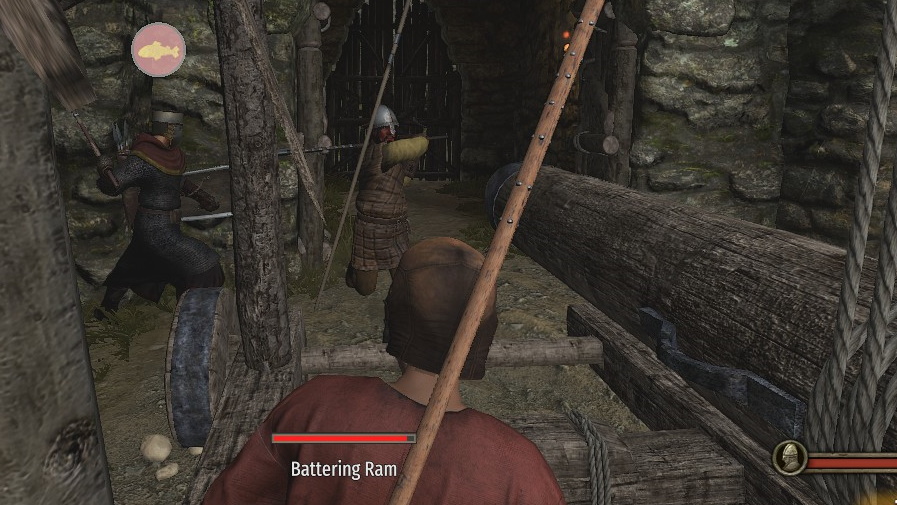 Brendan: I was just thinking: I’ve played over 100 hours of this game in single player. And there is no way I would play half of that – a quarter even – in multiplayer. No chance. It’s a fun distraction. But again, if I wanted to bash human-controlled heads with a mace for any length of time, or feel giddily incompetant on a 1500s battlefield, I’ll just reinstall Mordhau.

Sin: Yeah. I would just go back to single player. M&B has always been primarily single player, and that’s how I want it. Captain mode is fun and has potential to be a terrific bonus game, but the rest is currently lacklustre. Not bad, at least not for a game still with an estimated year left of early access. And there are more game modes to come, according to the Steam page. But I fear even captain mode is held back by the cumbersome command interface from the single player.

Brendan: Pressing the wrong function keys and telling my squad of crossbow dolts to “CHARGE” instead of to “form a shield wall” has been a common problem, that is true. Hang on, Sin, looks like there’s a volley of article-ending arrows inbound.

Sin: Raise your shields lads. You remember that plan we had about not getting shot? I shouldn’t have to… oh, you’re all dead