Mount And Blade 2 Bannerlord has you commanding large armies in epic battles But first you're going to have to win them over. Keeping their loyalty, feeding them, and upgrading them to stronger troop types will be the key to conquering the land. It'll take a lot of work, so we'll explain how to do it here.

Recruiting troops is rather easy. You'll need to either buy recruits from settlements for a small amount of gold, or convert prisoners into troops after capturing them. Regular troop types seem to be more favoured as the game progresses than any of the bandit classes, so consider raising troops from their respective factions rather than using a bandit force.

Once you've recruited a soldier, you can use them in battle to gain experience, which can then enable them to upgrade to better troop types. Below are some examples of the best troop types that you can recruit grouped by the faction they represent, and you can use the Encyclopedia (press the N key from the map and look at the troops pages) to learn how to upgrade them.

Once you have recruited troops, there are a few things you need to keep in mind. They are only loyal to you if you keep them well paid and well fed, since nobody works for free.

You can lose troops if:

Outside of paying them, you should ensure that your troops participate in battles where they win often. A varied diet is also a great way to boost morale. One portion of food purchased will keep one of your troops fed, and there's no difference if that unit of food is meat or grain.

Now you know how to get troops and what to do to keep them on your side, here are the best troops in the game:

How to increase party size in Bannerlord

Your party size is tied to the Steward skill. This skill takes a long time to level up, but the key to increasing the Steward skill is to keep your troops morale high with food variety. You can also assign yourself or your companions who have a high Steward skill to be your army Quartermaster. You can increase your Steward skill by managing towns. This will eventually your overall party size.

I'd also note that the number of prisoners that can be kept is half your current party size number. You can learn more about them in our Mount And Blade 2 Bannerlord prisoners guide. 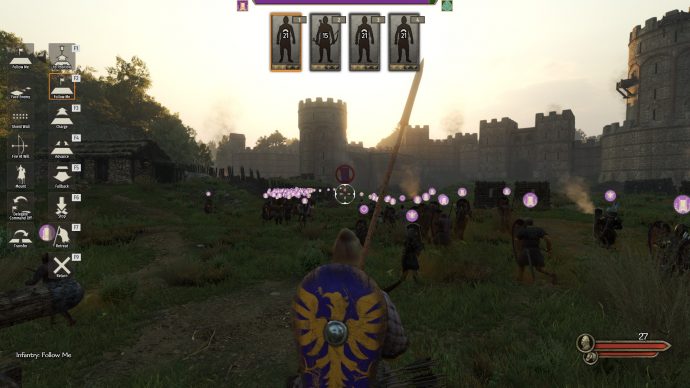 How to command an army in Bannerlord

So now you have a bunch of troops, but what do you do with them? When you enter battle, your army will be split into four units. Commanding them is a bit on the tricky side if you're not used to it, as it requires the use of the numbered keys and function keys.

First of all, you need to select the unit you wish to command. Normally these units are sorted into specific groups, where ranged units are all in one group, but mounted units are in a separate group that can be commanded to do something else. If your army isn't diverse in unit types, say if you're just leading a band of rogues, then they may be separated into groups containing multiple unit types.

In order to command your army, first press the numerical key associated with the squad. This will then allow you to give them orders with the function keys. Pressing the function keys for movement, changing the direction they're facing, and the troop's formation, will bring up a second menu of options. You can then press the second function key listed below to give them the order specified.

The full list of commands is below with which buttons you need to press for each, in the order you need to press them. Some require you to move the mouse to assign a location for the selected unit to move or face, indicated by a banner.

Thank you for reading our Mount And Blade 2 Bannerlord troops guide. I hope that commanding your armies is now a little less stressful, but I would encourage you to practice with formations against bandits and rogues of smaller sizes, so that you're prepared to face armies.

There are plenty more guides for you have a gander at, including details for character creation, as well as the bugs that are unfortunately in the game. Here are some guides to get you started: