When you begin Mount And Blade 2 Bannerlord, you'll only have a paltry sum of gold to your name. In Bannerlord gold is especially important to succeeding and you will want a lot of it. Why? To fund your war campaigns of course!

So in order to build up your army and keep them fed, you'll need to make some smart investments. This can be done by trading profitable items with traders and getting tips of which items sell for a lot of money by talking to caravans.

Our Mount And Blade 2 Bannerlord trade guide will show you how to make a profit with trades, how to set up your own caravans, and other ways to make money.

Use caravans and rumours to trade goods for profit

Rumours are an important thing to take advantage of when it comes to making lots of money. All of the rumours you discover will be about where certain goods are sold for more than their usual price. Sometimes it's just a small increase, but for rarer items the potential profit could be significantly higher.

You can find out where goods are most valuable by hovering your mouse over the item while trying to sell it in a village. If the item has a green price listed, it's cheaper than normal, while red means it's more expensive.

Prices change as the village's stock of that item rises and falls, so try to sell only what you need to sell rather than everything you have. Settlements also have a cap on how much they can pay for your goods, so once you've got all their money, go elsewhere to sell the rest.

In the list of stats for items that you can trade with settlements or caravans, you may find an extra line that says something along the lines of "Can sell at [LOCATION] for [GOLD]". Rumours don't appear in every village or town, so visit different settlements to get different rumours. There is an example of this below.

Another helpful indicator of items that may sell well comes from the description of the town you are entering. If they are suffering from a food shortage, you may be able to sell your rations for a higher price than normal. You can also get rumours by talking to the peasants while walking around settlements. It's the first thing they say before asking what you want from them.

The types of troops you have in your army affect your movement speed in the world map. If you have a lot of men on horses, you'll move a lot faster than if your army has lots of looters running on foot.

Since movement speed on the world map is key to travelling between two locations quickly, you may find that conditions change by the time you arrive at a far away settlement. There's also the risk that carrying around lots of items will attract unwanted attention from bandits.

Set up caravans to improve the trade economy

The purpose of caravans is somewhat unclear from the outset. It takes a while but they do earn you money when they make a profit on traded goods, as seen in the clans tab (cheers "jackarbiter"), as well as bring items into towns that you own.

The companion that you choose to lead the caravan also gains skill points in the Steward skill. They also act as an NPC caravan who gives advice on where to buy and sell goods, and also acts as a trader. They sadly don't sell goods to you at a discount, the cheapskates.

Your caravans will also visit towns to sell items and boost the local economy, meaning that if a town is short of a certain type of item, but has another one in abundance, they can travel between the two. By improving the local economy with trade, you can sell profitable items for more gold to invest in securing more profit later. 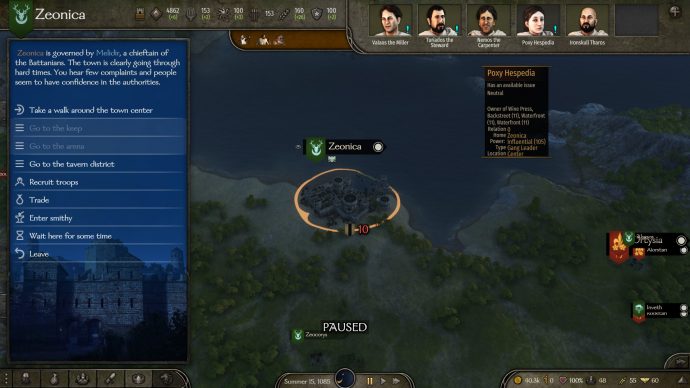