It was a bold move for Disney to release a blockbuster sci-fi RPG without any control input at all, but there's no doubt about it: that's exactly what their Star Wars spin-off TV show The Mandalorian is. And for my money, it's the best RPG of 2020 so far.

Not convinced by this admittedly fairly spicy take? Don't worry. With the eighth and final episode of Mando having just aired in the UK, and with it being Star Wars Day and all, I've got the perfect excuse to talk about a series I've been glued to, and bring you onboard with the idea that it's not a TV show at all, but an RPG that plays itself.

1) The main character is a blank slate 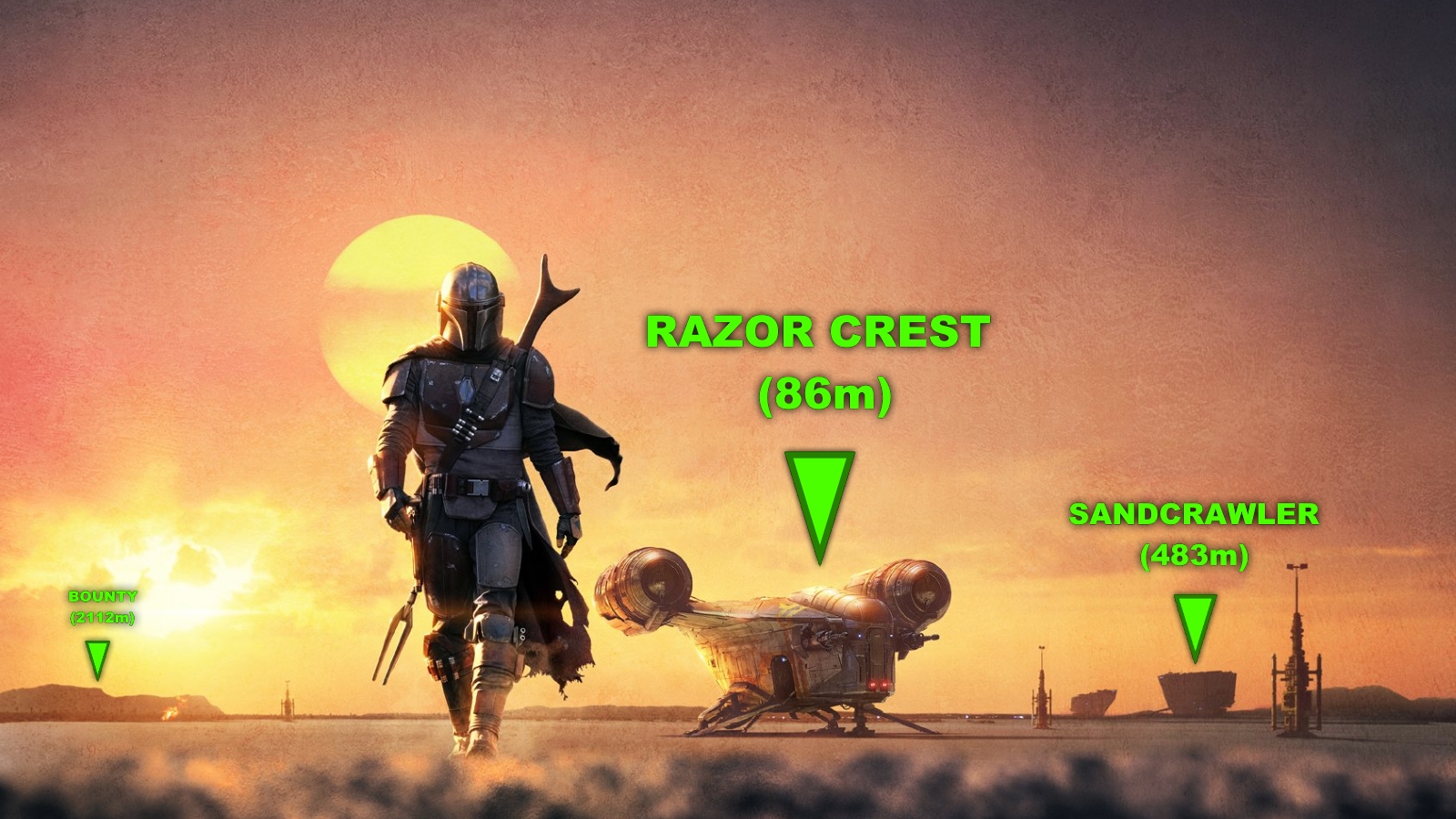 OK, I know Mando is in many ways a homage to classic westerns, and he is very literally a man with no name. But he's also a hell of a lot like your classic game protagonist. He's gruff, sardonic, and has neither a name nor a visible face, allowing you to project yourself entirely onto him. Like the Master Chief, only with a different hat. He's also a moral blank slate, starting his adventure in distinctly grey ethical territory, but gradually drifting towards the "good" half of the alignment chart as he's faced with a number of pivotal decisions.

2) It's all about loot grinding 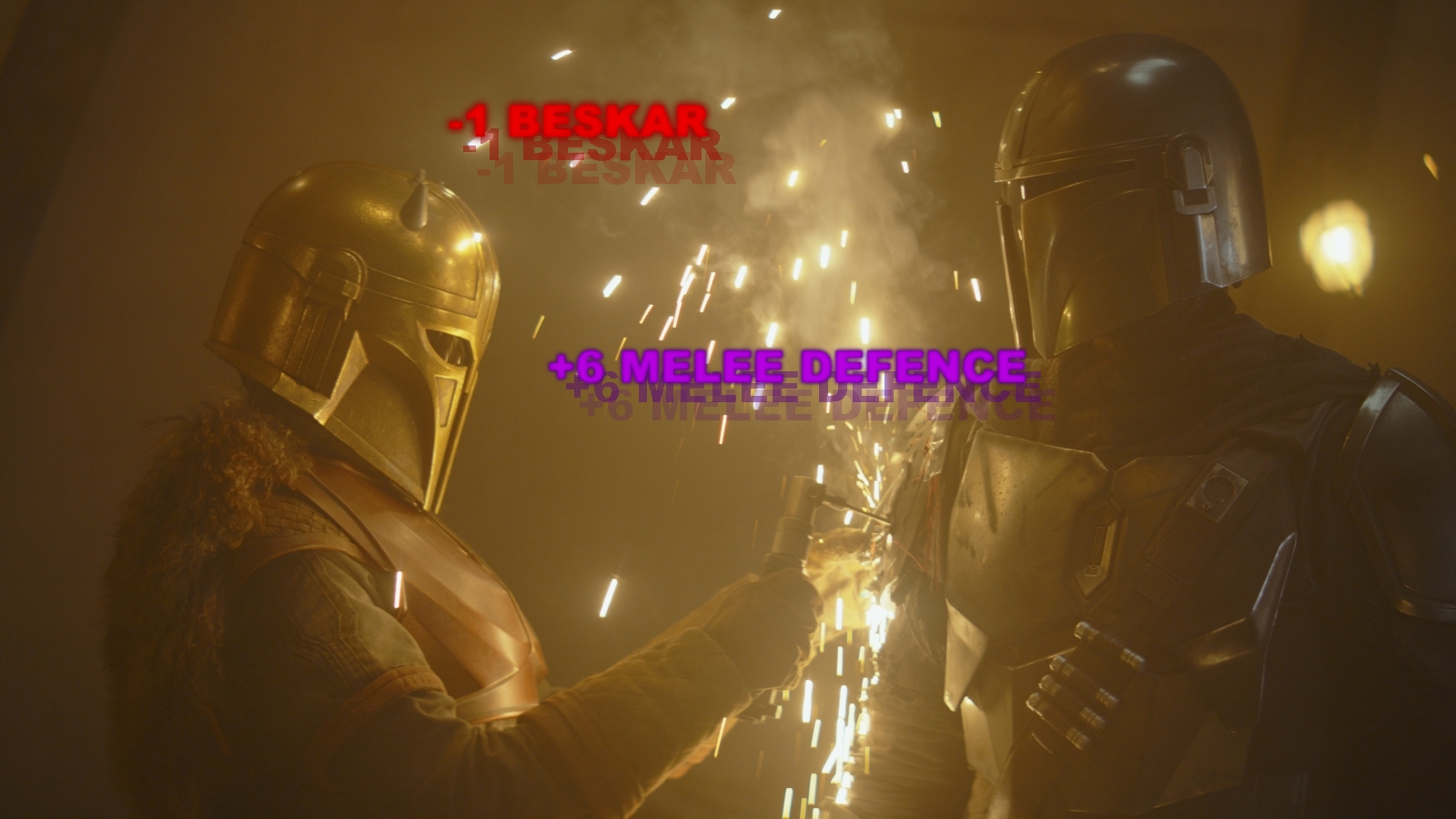 When Mando does jobs, Mando gets paid in Beskar, the mystical metal at the heart of his near-extinct culture. And once he's stacked up enough of this conveniently generic metal, he takes it to the Armorer, a lady who holds a dual role as a blacksmith and a priest of some kind. Based on the amount of ingots he's collected, she'll make Mando new bits of armour, that will increase his stats. A small job might win him enough for a shiny new pauldron, while a gigantic haul (kicking a rhino to pieces and kidnapping a Yoda) is enough to get him a whole suit of the good stuff.

3) There are occasional weapon unlocks 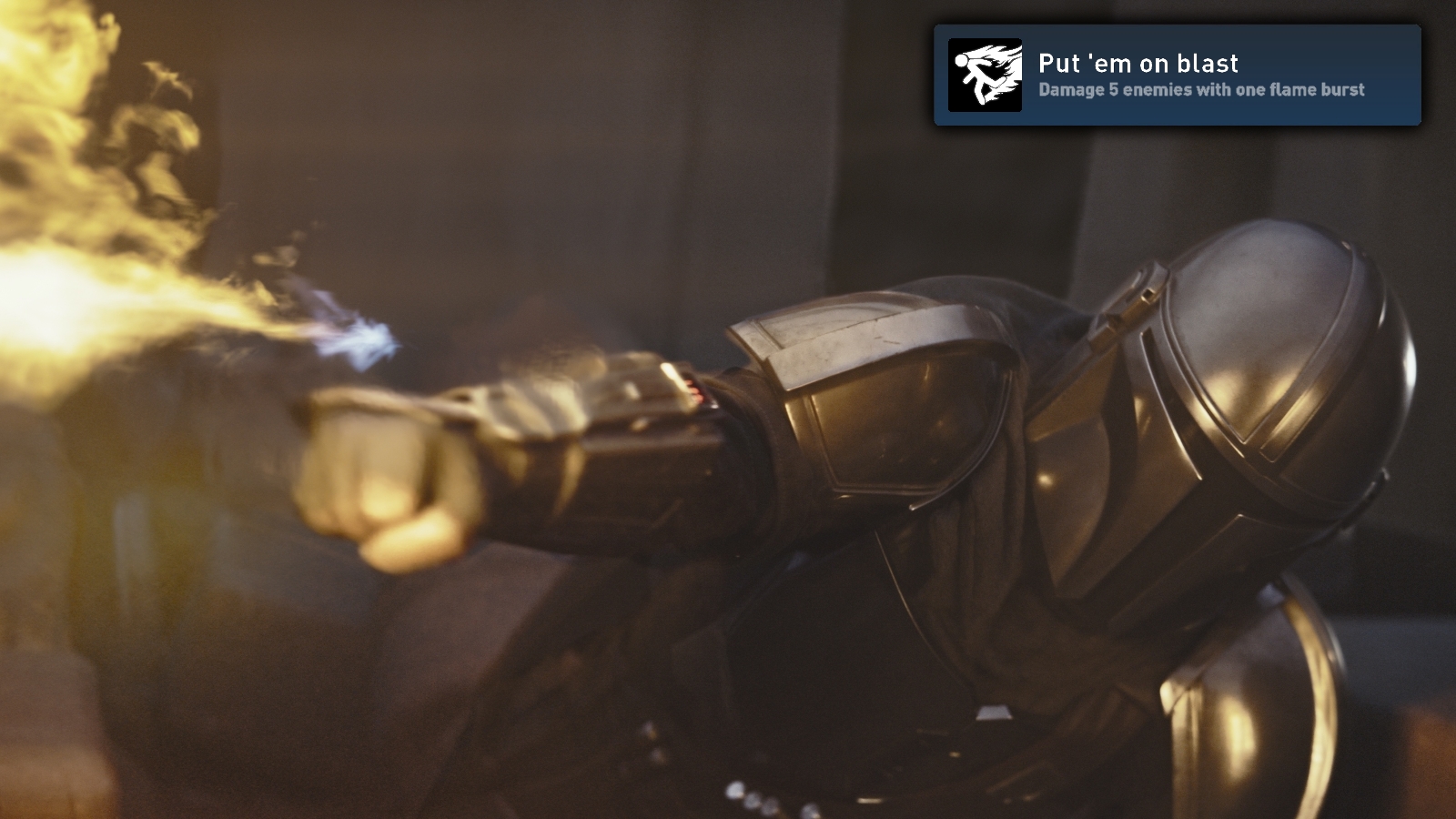 As the missions racks up, Mando accesses more and more exciting ways of damaging people, and it's a real treat every time one gets unveiled. There's his vambrace-mounted flamethrower, his grappling hook, and then of course his astonishing rifle, which unlocks a sniping mode, an eavesdropping tool and even a melee stun capability as the game.... I mean, the show, progresses. The crowning piece of kit, however, has to be the "whistling birds": a swarm of micro-missiles that can (and do) busticate an entire room full of assailants.

4) It's got several main quest hubs 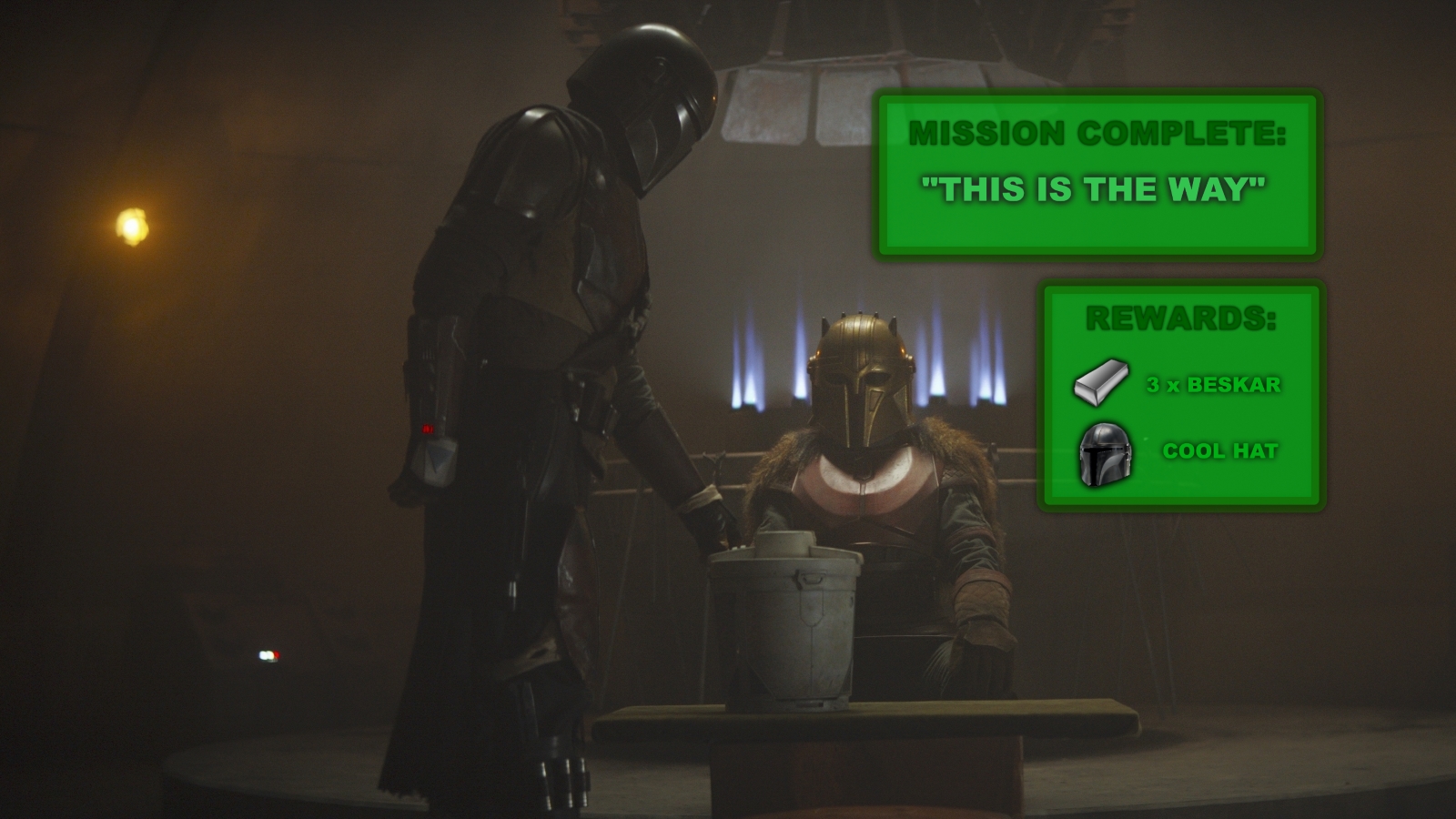 5) Nearly every episode is a textbook RPG missions 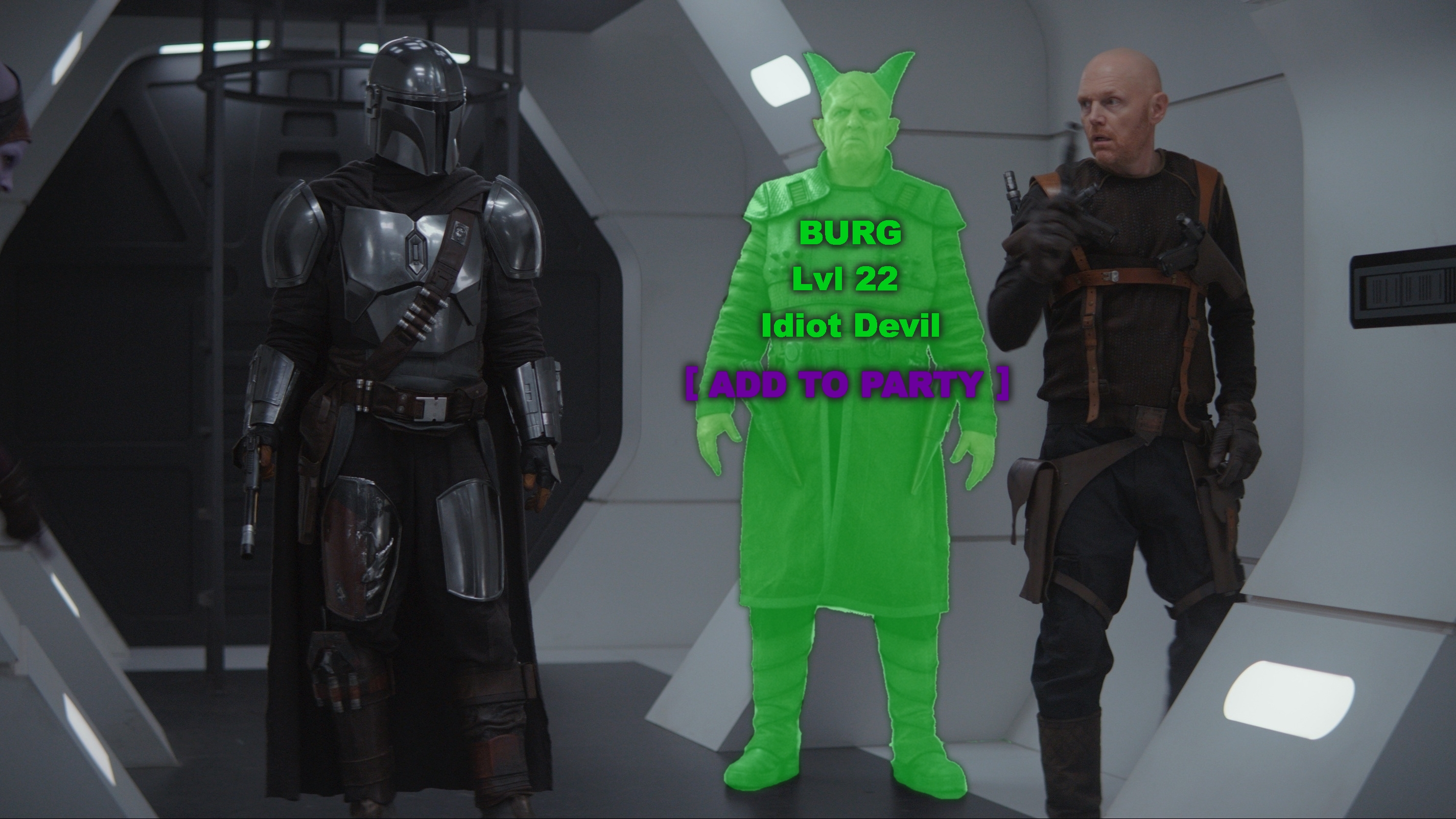 Most Mandalorian episodes play out exactly like RPG quests. In episode two, he has to fight a miniboss (an angry rhino lad) in order to acquire a hairy egg, which he needs to pay off some Jawas so he can fix his ship and move on to the next quest hub. In episode four, he teams up with an ex-rebel shock trooper in order to protect a village of farmers from literal orcs, and there's even a boss fight in the form of a big, nasty, looted Imperial AT-ST. But it's episode seven that really takes the biscuit, as Mando becomes the fifth member of a party of scumbags tasked with raiding a New Republic prison transport. There's a droid with the hacking skill, a gunman who's unlocked a perk that gives him the ability to fire three guns in a turn, a sort of horrible horny alien in the classic rogue archetype, and a big stupid devil man who put all his skill points in strength. 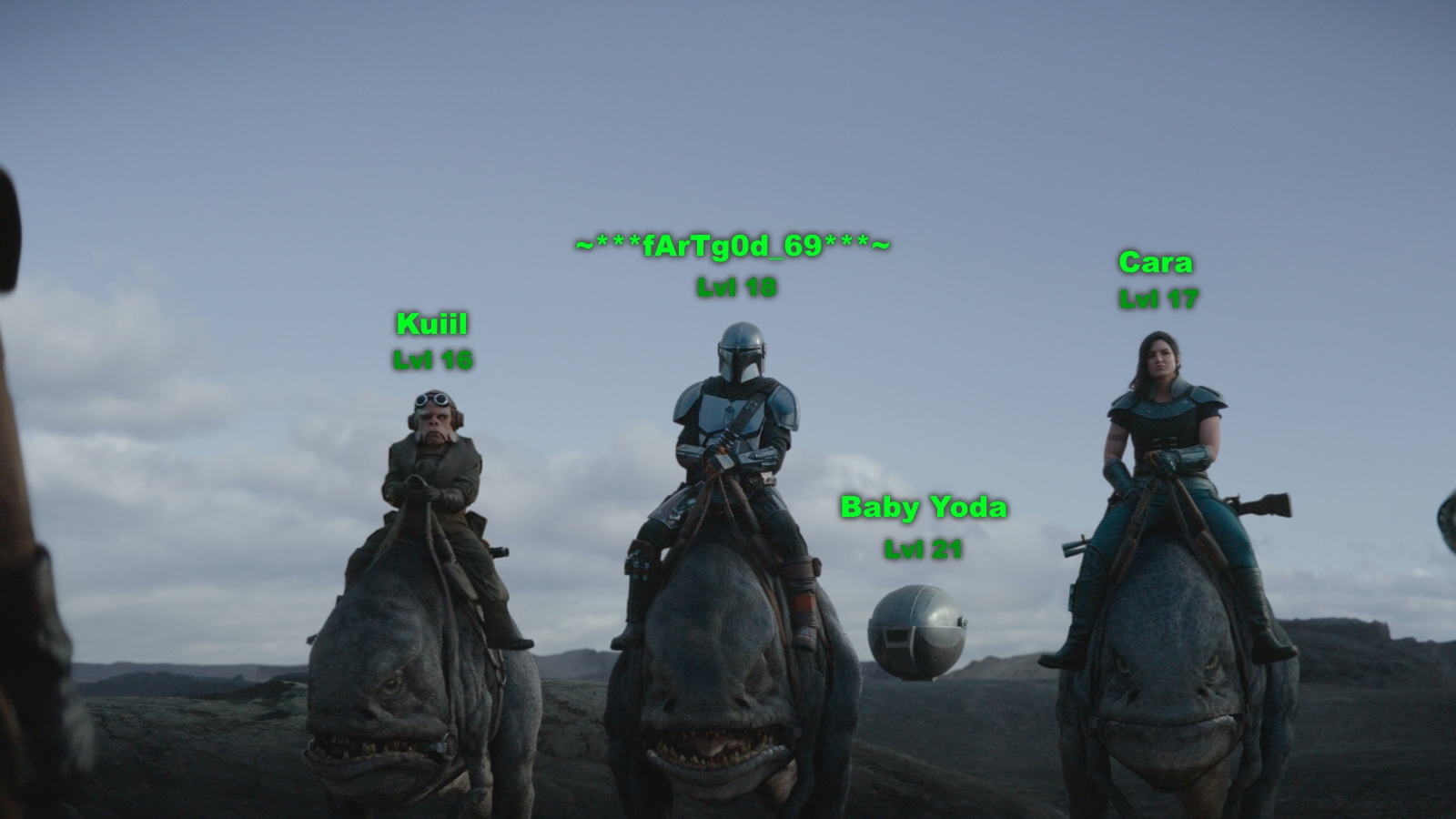 Although a loner by nature, Mando's mission to protect a small green child from Werner Herzog sees him begin to assemble a party of misfits, one by one. They've got complementary skill loadouts - soldier (Cara), engineer (Kuiil), mage (Baby Yoda) - and the latter in particular even picks up new support abilities as they level up. In classic Mass Effect fashion, they all even end up living on Mando's ship. Even, brilliantly, the gorgeously unpleasant Blurgg animals belonging to Kuill, who look like someone stapled the head of a salmon onto the back end of a dinosaur. They're my favourites.

7) ...and gets caught up in endless side quests 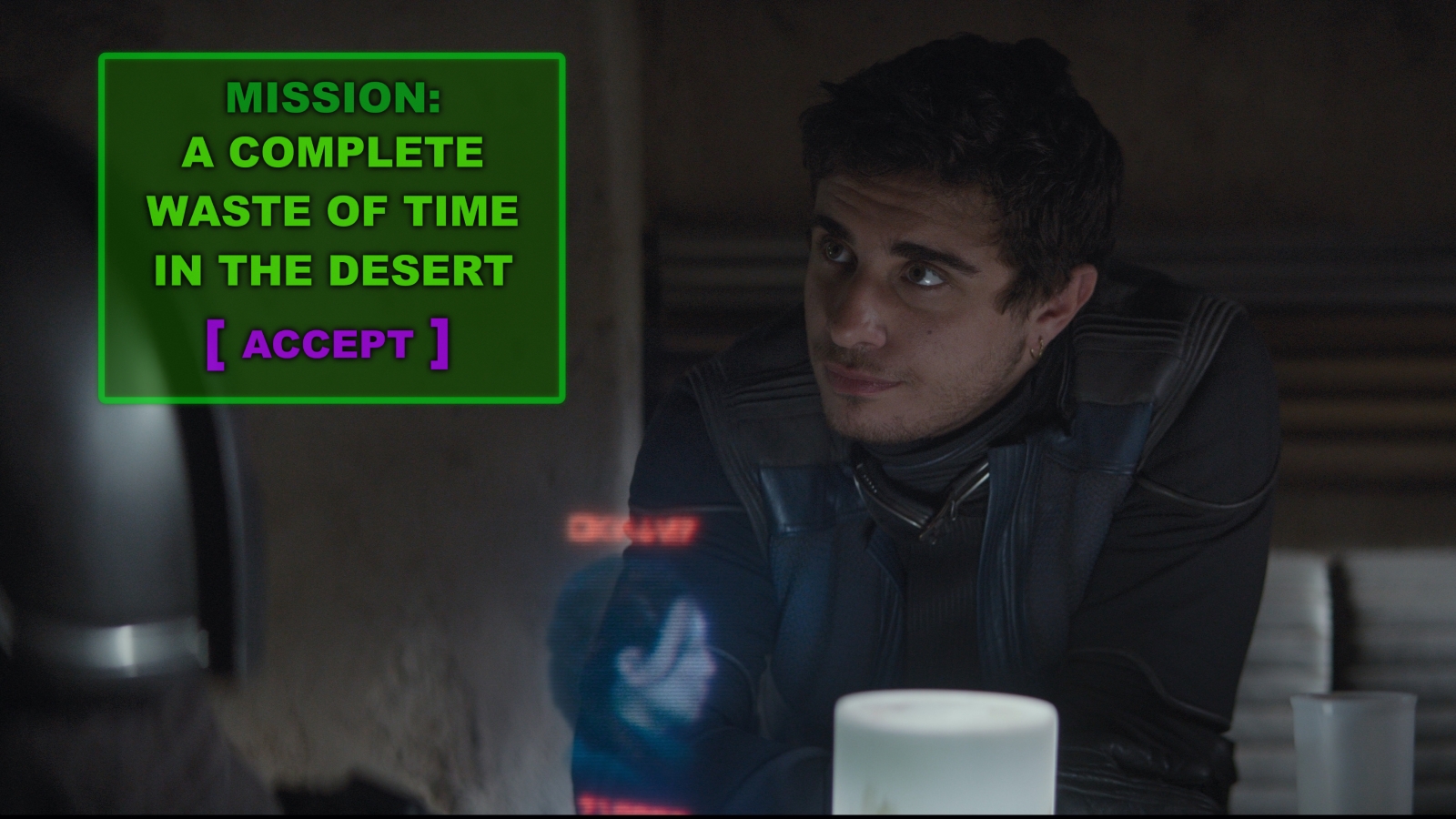 I think the moment when I realised I was definitely just watching an RPG play itself was episode five, where poor old Mando - who is just trying to get his ship repaired after he's been jumped by a load of gits - gets accosted by an aspiring young bounty hunter who's desperate for his help in fulfilling his first contract. Much like many of us, Mando feels weirdly obliged to this total stranger, and takes on the job despite it clearly being the last thing in the world he wants to do. Even though Mando's helmet obscures his face at all times, I could see it, right there, in the faint slump of his shoulders. That was me, thirty-odd hours into Skyrim, accepting some piffling fetch quest from a disrespectful cat person at the side of a road, while already in the depths of someone else's fetch quest, and with the actual plot of the game just an increasingly hazy memory. We've all been Mando in that moment.

If you're looking for some more Star Wars content on this blessed day, we've got a handy list of the best Star Wars games on PC. We also wrote a whole heap about Star Wars Jedi: Fallen Order, the most recent Jedi adventure, including our most and least favourite things about it, and an excellent array of Star Wars Jedi: Fallen Order guides if you need some tips for those boss battles. Yes, we love Star Wars here at RPS. Why, Knights Of The Old Republic is on our venerable list of the greatest PC games of all time!