Where Yooka-Laylee attempted to revive Rare’s Banjo-Kazooie formula, A Hat in Time [official site] strikes at a different vein of nostalgia. The 3D platformer attempts to split the difference between the open-ended adventuring of Super Mario 64 and the more guided point-by-point platforming of Super Mario Galaxy. The result is a work of obvious grace and imagination that never attempts to rise above its obvious inspirations, but still consistently delivers the same kind of warm fuzzies that its favorite Italian plumber deals in.

Like the games that came before it, the schema is open-ended - after a dust-up with a mafioso sucks all the time-bending fuel from Hat Kid’s cuddly spaceship on her way back to her home planet, she takes it upon herself to recover each of the shining hourglasses that power her craft. This involves descending to four different planets, each goofier than the last, and prying the goods from a wide variety of enemies, including owls, crows, a weird kid with a mustache, and - strangest of all - a gang of mafiosos who might (or might not) constitute a veiled meta-reference to the true meaning of Mario’s “goombas.” 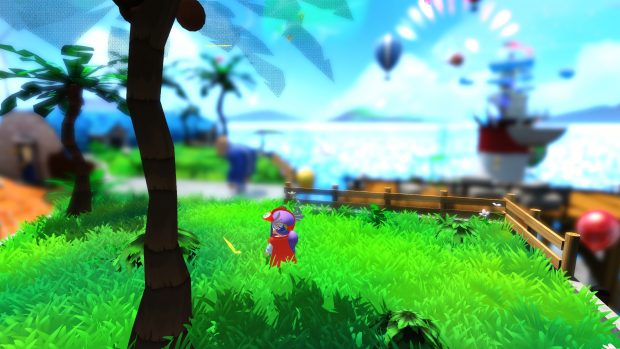 This isn’t a Rare-style collect-a-thon - though the vast levels filled to the brim with different detours might fool you into thinking so. Instead, like Super Mario Galaxy before it, the particulars of the levels shift with the mission you select. For example, a Times Square-esque city block complete with skyscrapers and storefronts fills with adoring fans in a latter mission, forcing you to take to the rooftops to avoid the mosh.

Other goals do allow you to free-roam and scour the environment for the two auxiliary collectables: yarn balls, which stitch together to form classic Jumpman abilities like a butt stomp or a magical projectile; and “pons,” which you can trade for badges that augment your existing abilities, such as turning your ever-useful sprint into a moped. While this encourages you to explore every dark corner and tall tower of these pastel planets, the fact that the game keeps the collectibles to a (relative) minimum - as well as mixing in more linear challenges to leaven the loaf - ensures that the collectible-grabbing never reaches the point of exhaustion, unlike many Rare platformers of the era. (Anyone who has tried to gather every character-colored banana in Donkey Kong 64 knows exactly what I mean.) This compromise approach blends all the best intentions of the two design philosophies that girded the crop of 3D platformers that Hat In Time seeks to emulate, and, as such, it feels like a charming, well-considered fusion between the two. 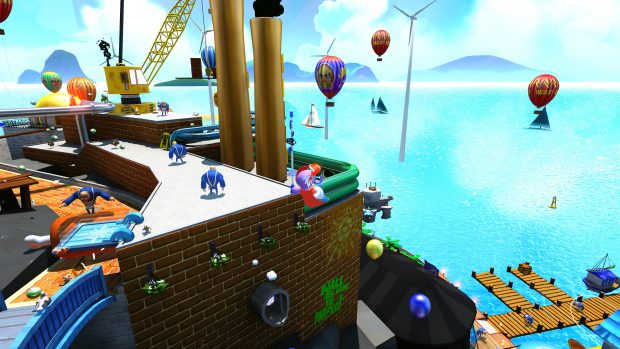 “Charming” is the word for A Hat in Time; every micron of its soft-hued universe seems tuned precisely to make you chuckle. The music jaunts along as you hop, mallets dance up and down the vibraphone, and encouraging tones ring out every time you grab a collectable. But while all this scene-setting is well-enough, a platformer is only as creative as its stages, and it’s only after the first hour or so in the rather trite Mafia Town that Hat Kid starts to find her jumping legs. The second world pits you in the middle of a feud between two eccentric filmmakers, DJ Grooves and The Conductor, on a planet populated entirely by birds. The Conductor wants to make Hat Kid the star of his Westerns. His first mission, which casts you as the detective in a “Murder on the Orient Express”-style mystery, is a real highlight, featuring clueless owls and crows that attempt to phish you for personal information.

DJ Grooves - pitched somewhere between Elvis impersonator and disco daddy - seeks to make you a pop diva. You run around his mock-Times Square, taking pictures with star-struck penguins and filming brazenly-false ads of Hat Kid saving cardboard kittens as Grooves croons about your skill and talent. Though both these encounters are mostly set-dressing, they’re followed in turn by two of the stoutest platforming challenges in the game, with the Conductor making you race through the train to defuse a bomb and DJ Grooves hitting you with an onslaught of rockets and streamers as you lead a parade through his Potemkin New York. 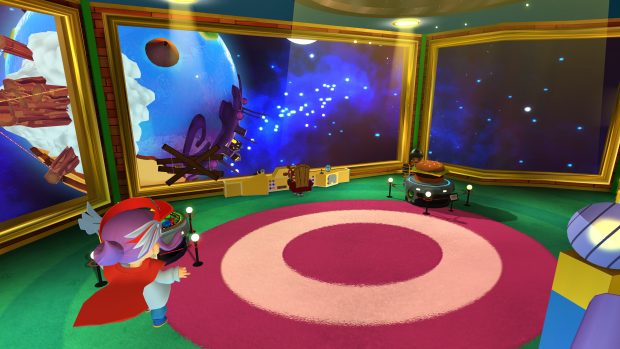 Your performance in these tasks - evaluated through a credit roll dripping with film grain that plays upon their completion - feeds into a real point total for each, with the winner receiving the Bird Oscar at the end, and the loser taking you to task for your inferior acting.

While that entire stage is pitched as comedic, the very next sees you selling your soul to an evil demon and doing his chores for your hourglasses, which includes duking it out with an evil commode and crawling your way through a surprisingly-effective haunted mansion. Though the moment-to-moment running and jumping might be typical fare for a platformer, the sheer charm and creativity that Gears for Breakfast brings to every hourglass kept me smiling. 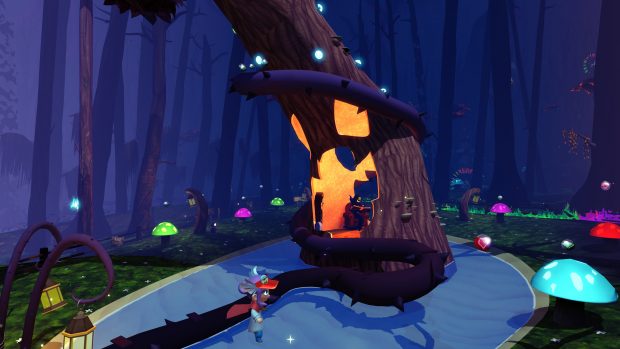 There are foibles, of course. A Hat in Time makes little effort to transcend the usual problems of the genre, and I found their presence occasionally discouraging. In particular, fixed camera angles are used just a little too readily, especially when it comes to the trickier leaps and wall-kicks. A Hat in Time isn’t a difficult game - far from it - but at times it feels like the Hat Kid’s platforming moves work against you. Between a sprint, a double-jump, and a dive, the impressive range of movement seems intended to prevent the sort of pixel perfect-platforming that the likes of Meat Boy popularized, and at times it feels imprecise.

This is especially true of the Mario 64-inspired dive that gives you just an extra bit of horizontal oomph, but can often leave you drowning in the drink thanks to a sudden swerve of your camera's view. The Ratchet-style hook/swingshot you obtain in the second half of the game feels quite satisfying, but skillful use of the dive and wall-jump allows you to skip many of the sections that make use of it - grappling would merely slow you down. Jumps onto small, curved surfaces like pipes never quite resolve correctly - add a fence into the mix and the Kid will occasionally auto-leap over its tiny height and into a bottomless pit. 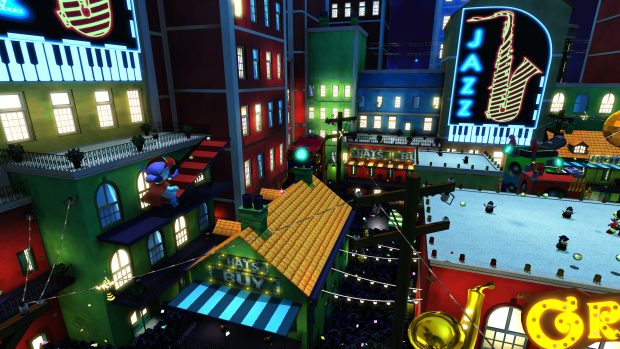 And then there’s the nasty business of JonTron - equal parts charmless and incongruous. Developers Gears for Breakfast gave the YouTuber a voice cameo in the game as part of its Kickstarter campaign back in 2013. Earlier this year, JonTron outed himself as a racist and bigot in a series of videos where he, among other things, claimed that Mexicans were trying to conquer American land, that “wealthy black people commit more crime than poor whites,” and that the term white supremacist “is a racial slur.” For what it’s worth, JonTron’s actual vocal role in the game boils down to a handful of lines - I missed it my first playthrough, and I was listening for it. Still, the fact that the part is so minor makes you wonder even more why the developer didn’t just cut it and recast the role, which is exactly what Yooka-Laylee developers Playtronic did in March when faced with the identical situation. It’s ultimately up to you whether or not this impacts your purchasing decision.

But though these hiccups sometimes frustrated me, the vibrancy and dynamism that Gears for Breakfast brings to every goal, every level, and every character of A Hat in Time made the journey worth it. This is a game that, despite its derivative nature, manages to delight in the details enough to make me remember why I loved the games that inspired it to begin with.