I cruised through dozens of fights before disaster struck. A scuffle with a cultist saw my ship scuttled, thanks to me forgetting to man the water pumps. A foolish oversight, but I’d at least had the foresight to buy a lifeboat, which saved me and my crew from a quick and merciful death. The days dragged in that tiny boat, as we drifted in diminishing hope of rescue. We sang songs. We rowed. We swapped stories, and then blows.

Eventually, the others tried to eat me. I leapt overboard, and found myself adrift again - this time alone. It took several more days for some sailors to find me, on the cusp of starvation. I’d survived, but with such a setback that I felt compelled to load a save.

It says a lot that by far the most interesting thing that happened to me in Abandon Ship still had such a limp conclusion. Longform FTL with pirates, alas, isn't nearly as good as it sounds.

It's a solid premise, largely squandered. The main campaign starts with you on the run from a cult, after the appearance of the kraken you've been worshipping for most of your life gives you second thoughts about your membership. You sail around several distinct areas (foggy, stormy, poison gassey, etc), making simple decisions that usually result in you broadsiding someone. Combat's real time, but pausable, and involves commanding your crew to man cannons, put out fires, and generally make sure your ship is the one with less holes in it. Once you've
encountered enough encounters, a gate to the next area opens, and you do it all over again. And again. And again. 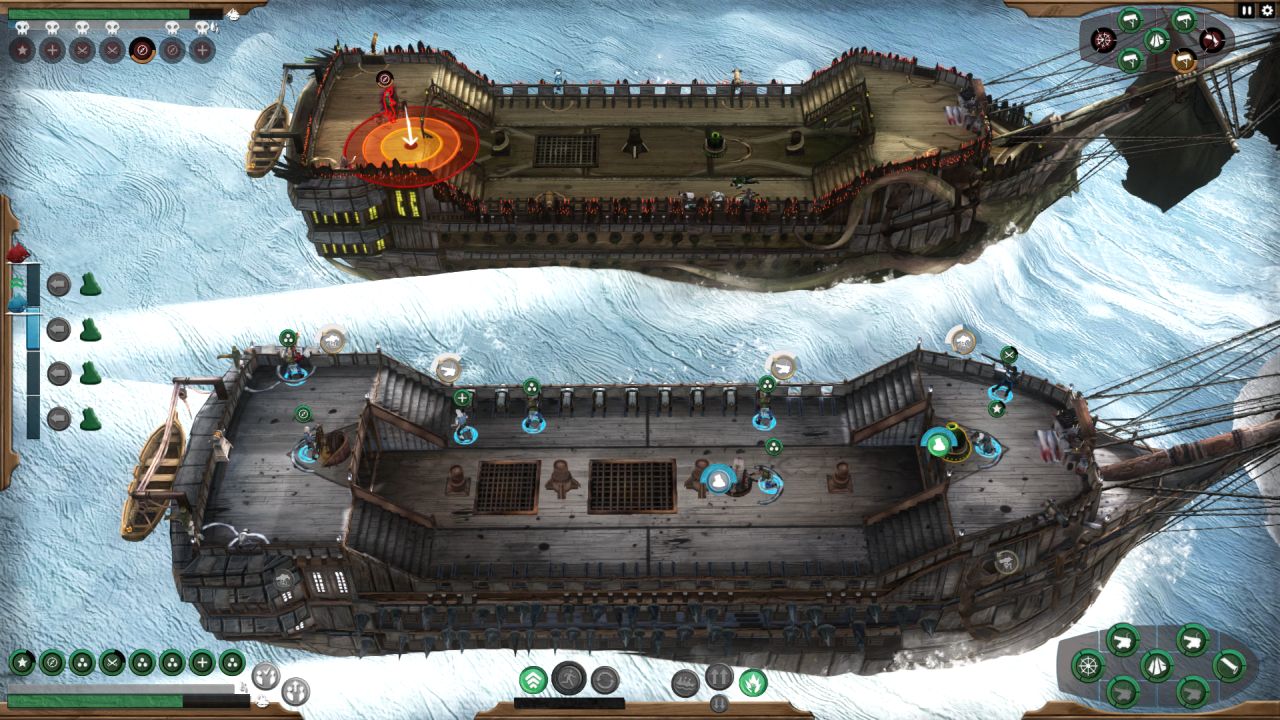 It's not so bad at first. When you set out, fresh wind in your sails and cultists at your heels, the seas seem full of promise. The events aren't arresting, but they work. You might choose to approach a lifeboat, only to have your crew's morale dashed at the sight of emaciated corpses. You might choose to save a town from cultist ships, accepting gratitude and gifts from the citizenry. But with a few exceptions, that's about as interesting as these events get. I wanted to talk to those people and, I dunno, maybe enslave them? Or have one of my crew members get tangled up in a love affair with the mayor’s daughter? Or something!

It wasn't long before it felt like I'd seen most permutations of most events, ripping through the illusion of their significance like a chain-shot through a sail. FTL has a similar problem, in fairness, where optimal decisions emerge through repetition and you begin seeing through stories to the costs and benefits beneath them. The vital difference is that in FTL those consequences still feel meaningful. Losing a crew member in FTL is a gut punch. Losing crew in Abandon Ship doesn't really happen, because they get injured instead - and even in a version of the game where they did die, I'd probably just shrug my shoulders and recruit another from the nearest tavern. 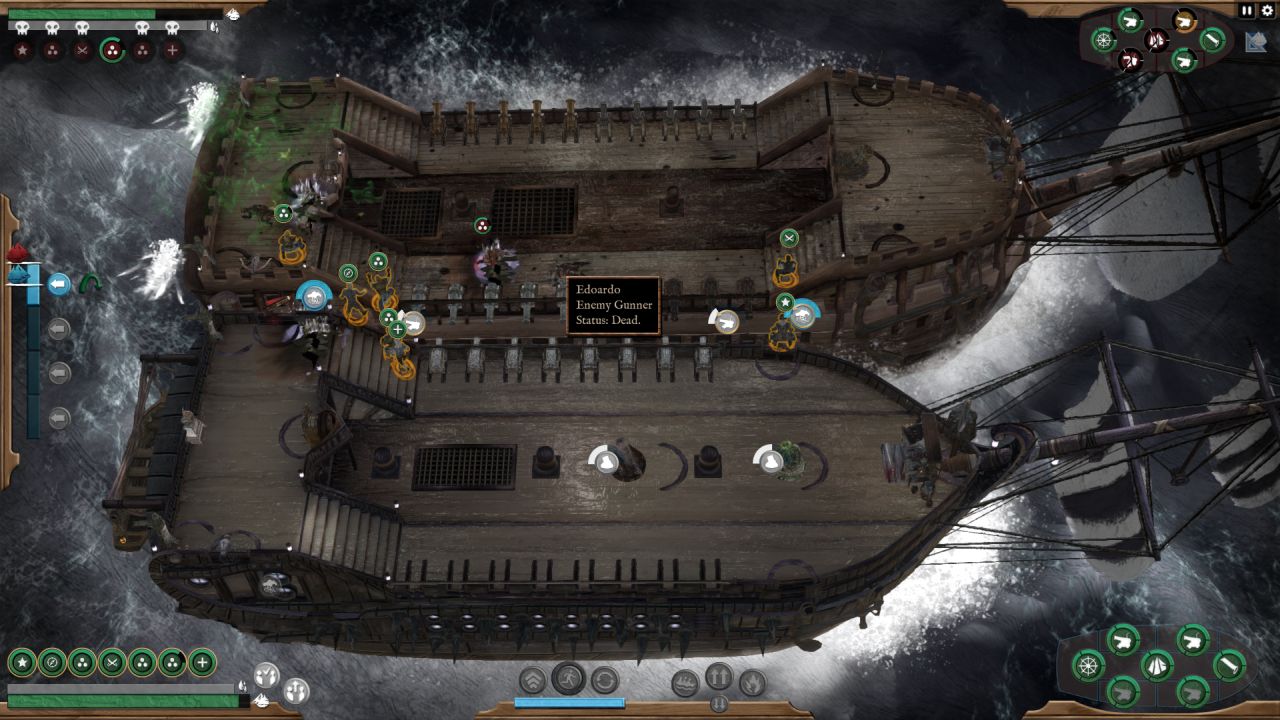 The combat's also too gentle, at least on normal difficulty. I soon figured out a winning strategy, gradually tweaking it over nine hours rather than feeling forced to improvise. In nearly every fight, I fired both my cannons at one enemy gun placement, then tossed an acidic mortar shell at the other. The gunner would back off, and by the time the acid cleared, my main guns would have reloaded and I'd be able to disable that cannon too. I got through many fights without taking a single shot, applying the same strategy to every ship I came across. Later I got berserk darts and a sniper rifle, and took to picking off crew one by one from afar rather than wrapping up fights with a ramming and a boarding.

I never felt imperilled, apart from that time my whole sink sank - and that was because I'd spent the past five hours not needing to even keep an eye out for my ship being flooded. When it did happen, it could have been tantrum-inducing, because the one place Abandon Ship abandons its gentle approach is in its withholding of saves. Bizarrely, you need to fish out single instances of the ability to save from events on the map marked with diving bells. On that front I was monumentally unlucky, getting my crew injured five times rather than winning the dice roll that would earn me a reprieve. I happened to use the single save I found just before my sinking, and my being knocked into a worse position than I was in at the start of the campaign. If I hadn't saved there, I'd have probably called it quits. 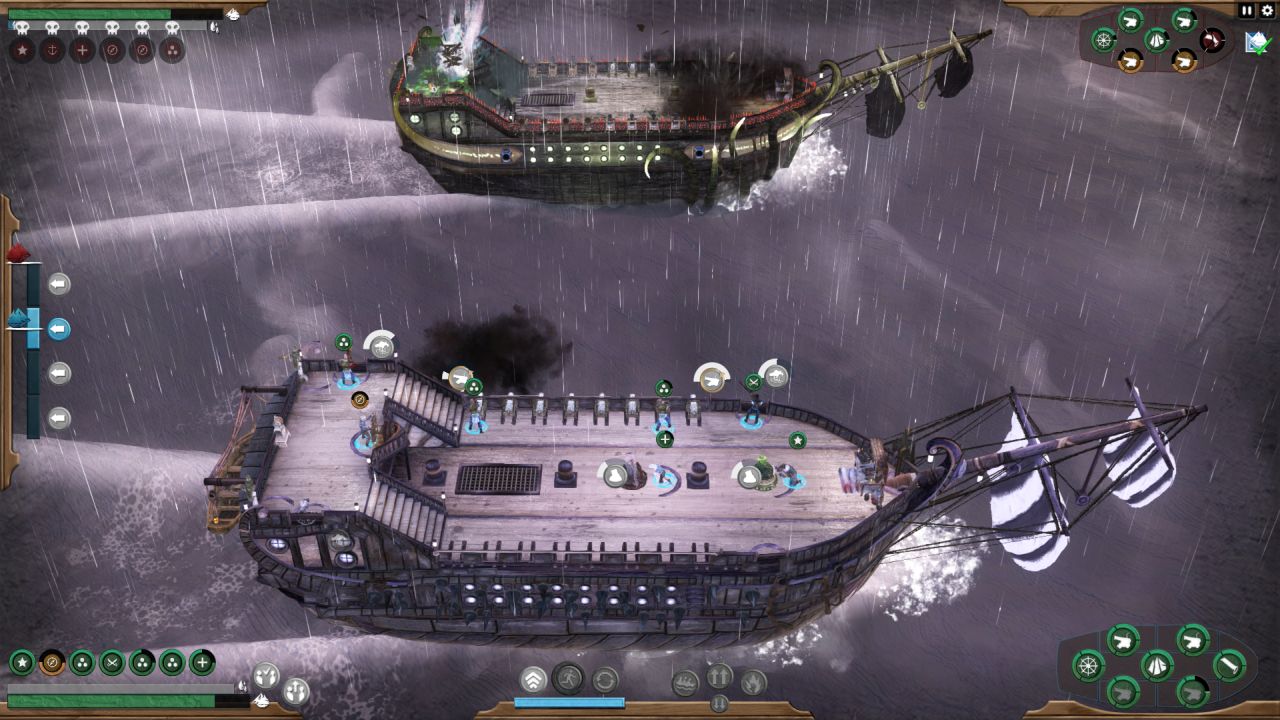 I still stopped well before the end of the campaign. It's split into at least two phases, and in the first you've got to deal with the kraken. You sail between islands figuring out how to kill it, but if you loiter in an area for too long it (or a big scary cultist ship) catches up with you and needs fleeing from. Once you've croaked the kraken, though, that system vanishes and you can sail around at leisure, dismantling the cult by polishing off three sets of five repetitive events. At this point, the lack of that early-game threat, always pushing you forward, is keenly felt. I completed a couple of those quest steps, but by that point I'd already bought the best boat and every upgrade I could ever want. I'd bought and climbed the biggest crow's nest, and there was nothing new in sight.

If Abandon Ship was both meaner and better-paced, I'd be tempted to call it a good game rather than an OK one. Despite their advantages largely being unnecessary, I did feel a gentle pull towards buying upgrades and bigger ships. For a few hours, I didn't even particularly mind wading through fights on auto-pilot - it felt satisfying to have solved a puzzle. But that description captures the combat's limitations. I'm now craving the nuances of FTL, where you twiddle with energy levels, more varied equipment and the unique traits of different species. I've played that game for a hundred hours and still get stumped. 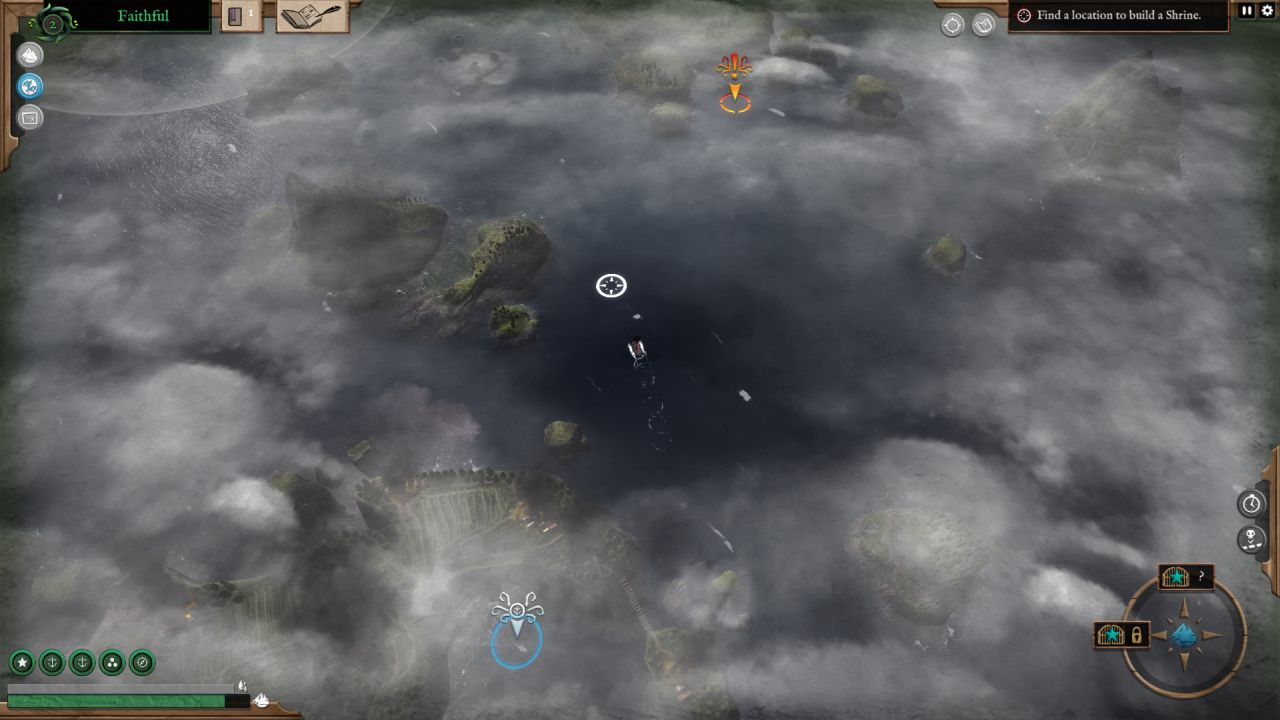 Abandon Ship can't escape FTL's shadow. It's too similar to avoid being judged based on the high bar its spacefaring cousin set, but it falls far too short of that bar for me to like it. Turns out those water pumps aren't worth manning after all.