My career in Street Fighter was a painfully short-lived experience. For a long time, I’d been trying to find a fighting game to really get into and to help me understand a genre I’d always been quietly interested in but entirely apart from. After being gifted Ultra Street Fighter 4 back in 2014, I was quickly hooked on the technical mastery and quick action - a few runs of Arcade, and I was even starting to feel competent. But getting good at Street Fighter, or any traditional fighting game, requires a strong level of commitment: lonely hours spent mastering frame data, grinding against opponents and the local competition. After a disastrous showing at a Dundee tournament, I was out.

Fighting games, I figured, just weren’t for me - until Absolver came around.

Absolver isn’t a game so much about technical competency as much as teaching fighting as expression, and this trickles down into everything from how dress your fighter to how you build your deck. Most importantly though, it works its way into how you interact with others in the world. Absolver takes place in a Souls-ish open world, full of weaker foes and tough bosses, with other players phasing in and out in a very Journey-like manner. The one-versus-one game is the meat on Absolver’s bones, but there’s so much space outside of pure competition to make friends with strangers. It’s a much less oppressively lonely experience than it’s genre contemporaries, and it’s refreshing to have the option to just not bother with a fight to the death and go explore. There’s so much room for spontaneous parties to form, taking down crowds or world bosses - but also Jedi Academy style spontaneous duels to the death, only for the victor to pick their opponent back up, ready for the next fight. 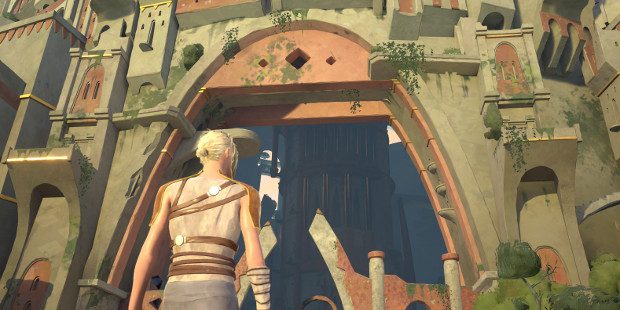 Even in the more structured combat trials - Absolver’s one-on-one duels - there are more options to interact with other players. In traditional fighting games, online opponents are a brick wall - an endless stream of faceless fighters that, more often than not, will ruthlessly grind a newer player down. These games are best enjoyed locally, but we don’t all have groups of similarly-skilled players nearby to learn from, and practice against. Significantly, there is no timer in Absolver’s trials, and the arenas are wide - there’s space for more than fists. It’s become unspoken law that a round will begin with a bow. An introduction cutscene will show the duelists bow or emote, but that choice to manually animate your character rather than rushing in for the first easy hit gives you a fantastic sense of how patient a player is.

Like the best action scenes in film, Absolver gives the space to make your fights really mean something, and tell a story. My first combat trial was against a newer player, and boy, it was rough for them. Round after round, I’d knock them down, but each time they’d rematch in an instant. It was a martial arts montage in action: flashes of fights over in a few seconds, before the battered student would get up and shout, “Again!”. Space to applaud when they got a win in, until that final climax where they knocked me down, lessons completed. It was spontaneous, and it was fantastic.

I don’t get around to playing Absolver as much as others, but there’s always time for a round or two every other day. I’ve had countless rounds getting absolutely crushed by folk who can put more time into learning a fighting game - after all, this is still a brutal one-on-one brawl. But Absolver, by humanising your fellow fighters and gifting the space to do more than batter each other to a pulp, encourages me to dust myself off, get back on my feet, and demand one more round.