Considering it has an Nvidia GeForce RTX 2080 Ti and an Intel Core i9-9900K inside it, Alienware's Aurora R8 gaming desktop sure is diddly. Measuring 472mm tall, 212mm wide and just 360mm deep, this sleek, 28 litre chassis is noticeably smaller than the mid-tower case I've currently got shoved under my desk. It's so small, in fact, that it can sit on top of my desk quite happily without taking up too much room, and its three-pronged RGB light strips down the side don't distract from the task at hand, either. If anything, it's the fans you'll notice the most, as this liquid cooled powerhouse is still quite the whoosher and whirrer under load. Still, as a pint-sized pre-build with the fastest components currently available, is the Aurora R8 worth considering as your next PC? Here's wot I think.

In keeping with Alienware's Area 51 vibe, the Aurora R8 looks like it's been beamed in off the set of Bladerunner or an old X-Files episode. You've probably already got some strong opinions about whether you like that sort of thing or not, but even though it looks pretty incongruous on my manky, old, tea-stained and cat-hair covered Ikea table, there is something pleasingly futuristic about its monolithic-style chassis and the subtle beams of light leaking out of its seams.

For me, it's a look that oozes power and sophistication, but open up the grill side of the Aurora R8 and you'll immediately see what kind of compromises you're making for picking such a small, compact chassis. Indeed, unless you're really confident with the old screwdriver, this is not something you're going to be able to upgrade easily when it starts to feel a bit long in the tooth.

If you buy it with one of the top-end specs, this probably won't be much of a problem. After all, a Core i9 / RTX 2080 Ti combo should last you plenty of time before they start feeling a bit creaky, and by then you might not mind as much buying a whole new system. However, if you're thinking about getting one of the lower-end Aurora R8 specs, such as the entry-level £799 Core i3 / RX 560 build (or $900 Core i5 RX 560 build if you're in the US), then that's going to start feeling older much quicker as games get more and more demanding. As a result, I would only really recommend going for a compact chassis like this if you want to go all out on the available components - otherwise you'll just be shooting yourself in the foot further down the line. 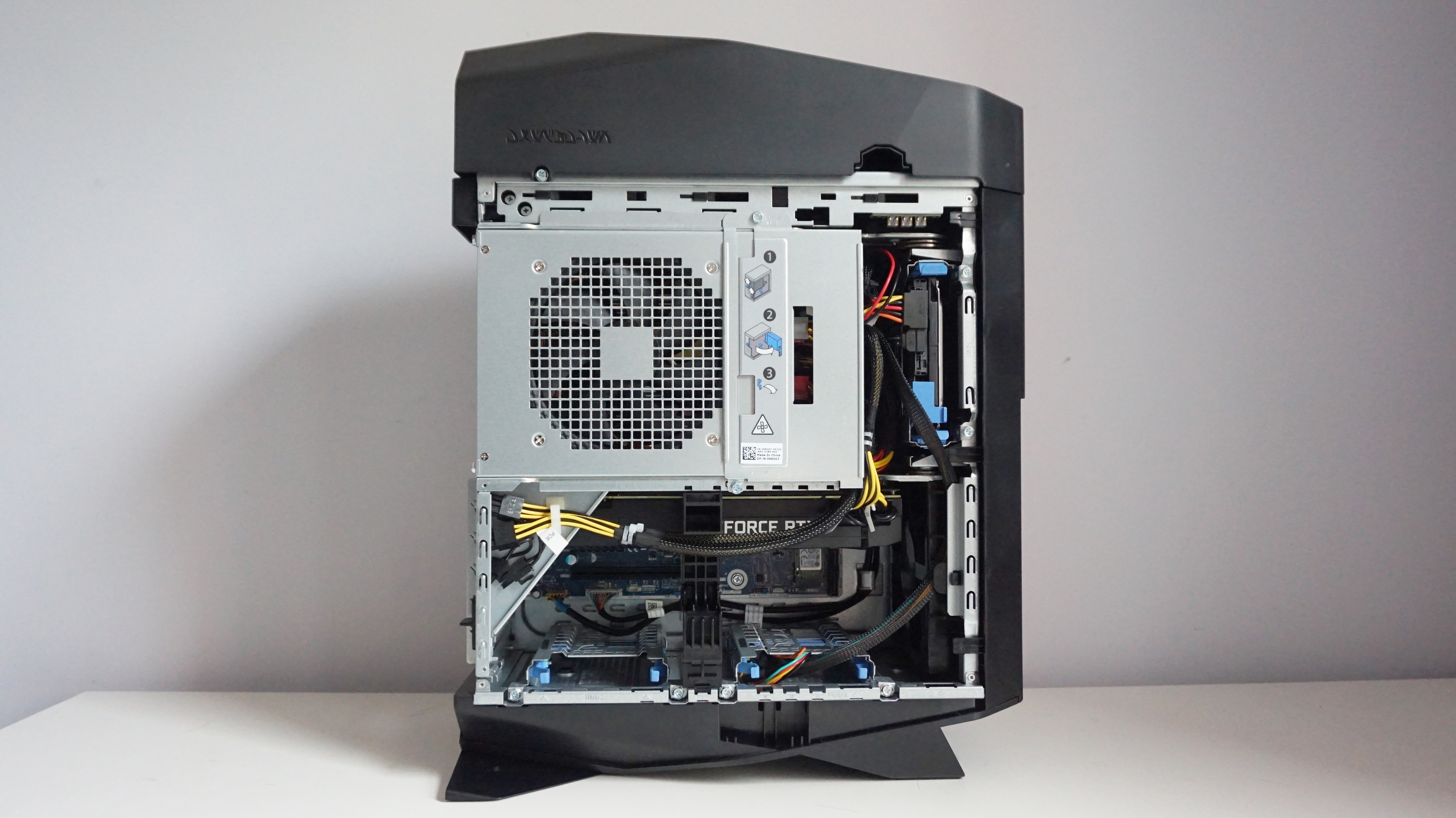 The only thing you can really tinker with without taking everything apart is the storage, as you'll find two free drive bay mounts on the very bottom of the case underneath the graphics card. The only thing you'll need to supply are the SATA cables (the ports for which are just about reachable in the back corner), as the power cables have been handily tucked inside one of them for easy access. You can probably also just about add another PCIe x1 expansion card if you're feeling particularly nimble, but that's pretty much your lot.

The eagle-eyed among you may have also spotted that the RTX 2080 Ti graphics card is actually a single-fan, blower-style model rather than a dual-fan, or even triple-fan job (see below, click to enlarge). This is another compromise you're making here, and it had a noticeable impact on the Aurora R8's performance as a whole.

Indeed, despite being paired with Intel's ludicrously fast Core i9-9900K CPU, the Aurora R8's 4K and 1440p gaming prowess was either slower, or more or less the same as the results I obtained in my Nvidia GeForce RTX 2080 Ti review, where I tested the dual-fanned Nvidia Founders Edition of the card with my own non-water-cooled Core i5-8600K PC. That's not great when you're spending £2849 / $3100 on a PC like this, and it just goes to show that having top of the line specs doesn't necessarily equate top of the line power.

In Assassin's Creed Odyssey, for example, the Aurora R8 was an average of 10fps behind my Founders Edition results when I ran its internal benchmark on Ultra High quality settings at 4K, coming in with an average of just 44fps as opposed to 54fps. Both systems managed an average of 59fps when I dropped the resolution down to 1440p on Ultra High, but I was hoping the addition of a Core i9 might have bumped that up a bit higher for the R8, especially when I've long-suspected that my Core i5 has been acting as something of a bottleneck in this regard.

The R8 was around 5fps slower in Metro Exodus as well when I ran its benchmarking tool at 4K, finishing with an average of 45fps on Ultra and 51fps on High. My PC, on the other hand, managed 49fps and 56fps respectively. The gap only widened at 1440p as well, with my PC spitting out an average of 74fps on Ultra over the R8's 67fps.

It was a similar picture in Total War: Warhammer II. Whereas the R8 averaged 49fps on Ultra at 4K, my PC just pipped it to the post with an average of 53fps - a boost it then doubled at 1440p when it came in with 89fps on Ultra over the R8's 80fps.

Final Fantasy XV was another defeat for the R8 as well. While my PC was capable of producing between 40-45fps with all of Nvidia's fancy effects turned on at 4K on Highest, the R8 couldn't even break 40fps, and instead rattled along between 33-37fps. It managed to catch up a bit when I turned all the Nvidia effects off, reaching similar highs of 56fps compared to my PC's peak of 57fps, but it also bottomed out at 48fps compared to my PC's low of 51fps. 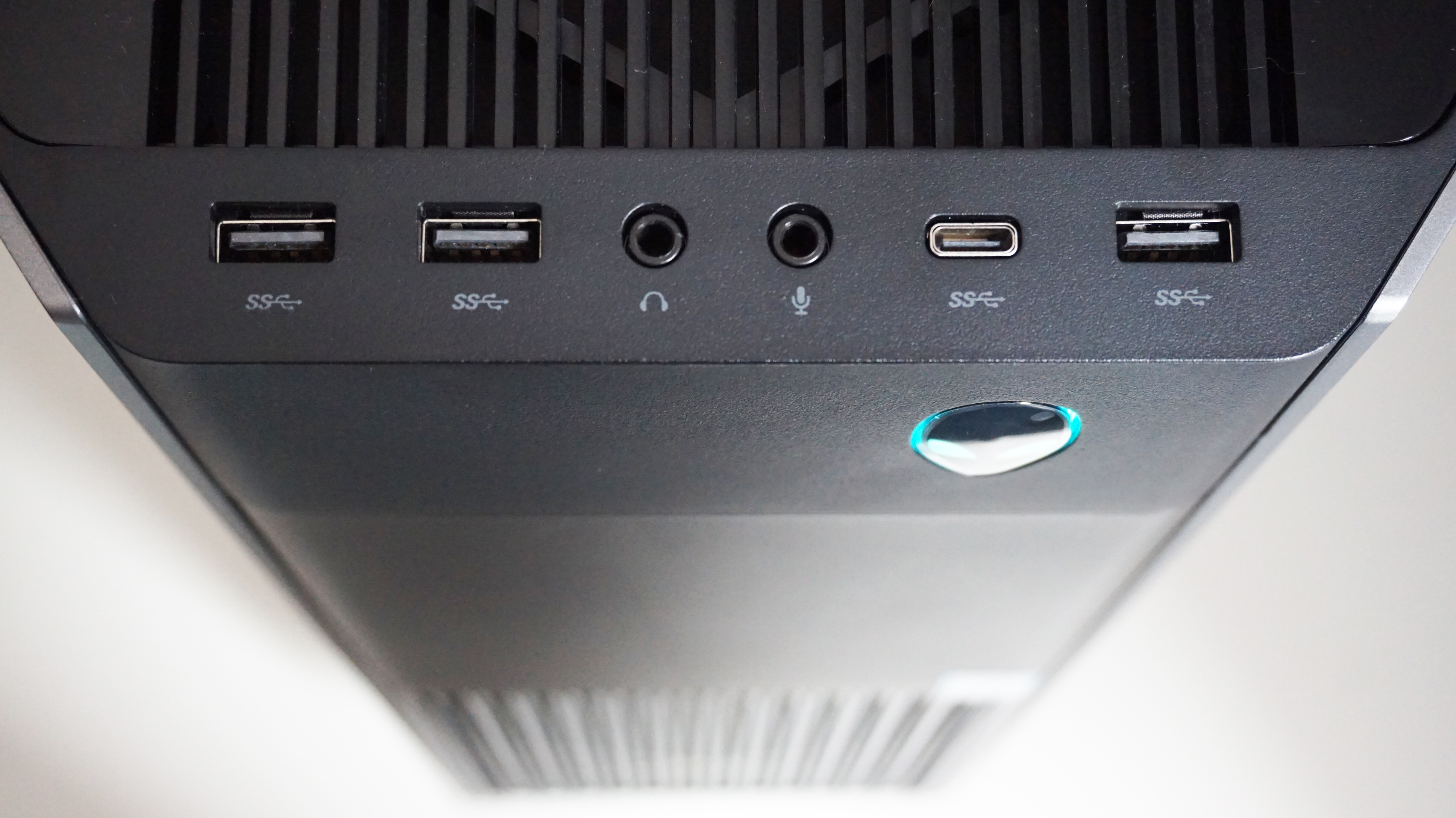 Elsewhere, the R8 was pretty much on par with my Core i5 RTX 2080 Ti results, posting equally fast 4K frame rates in The Witcher III (60-76fps on Ultra), Monster Hunter: World (40-50fps on Highest) and Shadow of the Tomb Raider (40-45fps on Highest). However, I still can't help but feel a bit disappointed by the Aurora R8's overall performance, and I suspect it's probably down to Alienware's choice of card.

After all, the Core i9-9900K's performance in Geekbench 4, for example, was more or less bang on with previous results I've recorded for that processor (5817 in the single core test and 29219 in the multicore test, if you want the exact figures), which would seem to suggest its lacklustre gaming performance lies squarely with the GPU. 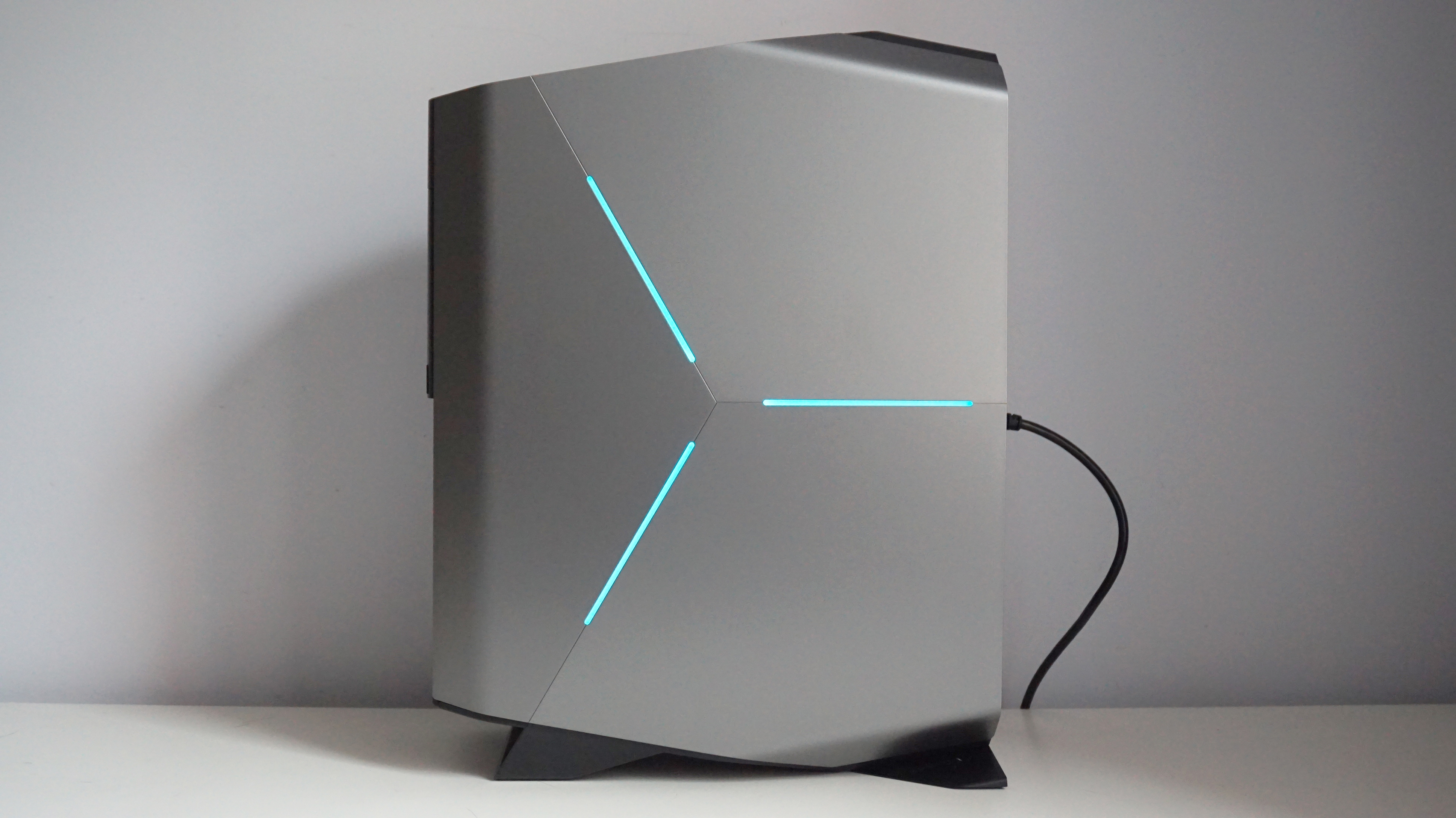 It's a shame, really, as it puts a pretty big downer on the R8's overall appeal for me - although without knowing what kind of cards are included in other specs, it's difficult to say for sure whether this kind of performance deficit extends to the rest of the R8's configuration line-up or is limited solely to the RTX 2080 Ti models.

Either way, it doesn't exactly bode well for this desktop gaming PC, so if you're really dead set on buying a high-end pre-build like this as opposed to building your own gaming PC, then I'd have to recommend something else like the Asus ROG Strix GL12CX, whose Core i7-9700K / RTX 2080 spec can currently be had for £2000 / $2500. This PC's performance is much more in keeping with what I'd normally expect from this kind of spec, plus it's a heck of a lot easier to upgrade, making it better value for money overall.