It's not often I have particularly strong feelings about PC cases, but man alive there's a lot going on with Asus' new ROG Strix GL12CX desktop. You've got your swishes, your slashes, your grilles and your grates, matt versus gloss versus RGB lighting, and even a full-blown chasm thanks to its hot-swap SSD bay. It's a lot to take in, but provided you can get over its many-textured exterior, there's a boat load of power to be found in its water-cooled innards, including an Intel Core i9-9900K processor, 32GB of RAM and an Nvidia GeForce RTX 2080 graphics card.

Of course, with a spec like that, the GL12CX is naturally a tad expensive. £3000, to be precise, when it launches late this November, although there will be an ever-so-slightly cheaper configuration with a Core i7-9700K and 16GB of RAM available for £2500 as well (which is also the model you'll find in the US for a princely $3300). "Three grand!?" I hear you exclaim. "A PC can't possibly be worth that much!" Well, that's what we're about to find out. Let's take a look.

The first thing I will tell you is that this thing is goddamn loud. Despite its Core i9 CPU being hooked up to a water cooler tucked away in the top of the PC, I thought I'd suddenly been transported to an airport hangar the first time I turned this on, so loud and deafening were its various fans and whizz pop machines.

Its performance profile was, admittedly, set to 'Turbo' in Asus' onboard ROG Armoury Crate software, but even opting for one of the GL12CX's quieter profiles (and creating a slightly larger air gap down the side by swapping out its black side panel for the bundled tempered glass one) was still louder than I'd like. This is probably down to the fact that it not only has a pretty titchy rear exhaust compared to your typical desktop setup, but its RTX 2080 GPU also falls into the slightly less efficient 'blower' category, too, giving it just one rather tiny fan to play with rather than two or three jumbo ones that take up the entire width of the card. 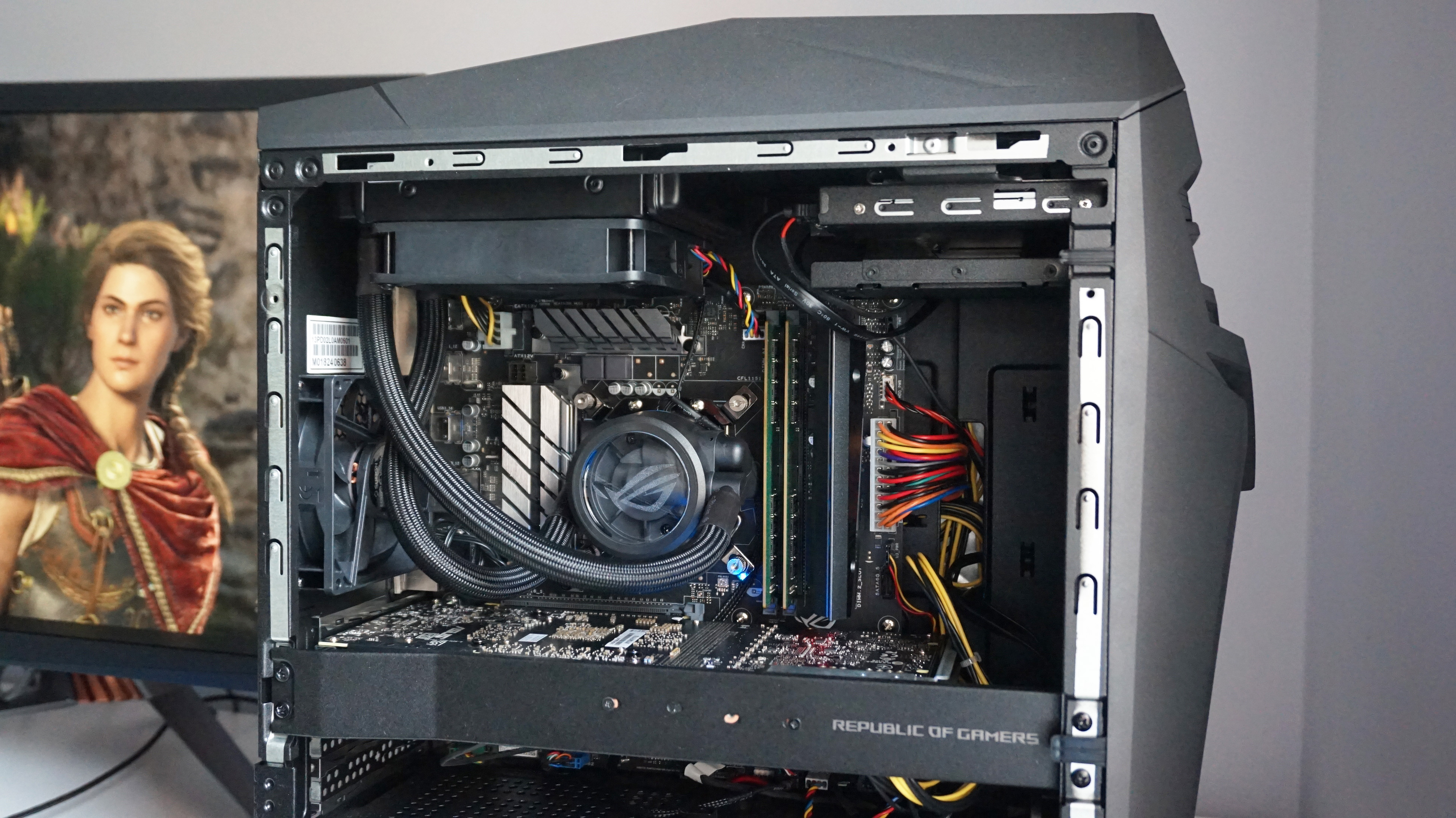 Still, while the GL12CX doesn't paint a particularly promising picture for those looking for a bit of peace and quiet, the upside of all this extra wind power is that it does enable you to run its 9th Gen Intel Coffee Lake CPU at its full 5.0GHz Turbo Boost speed, if not a little higher if you fancy overclocking it. This might sound a little counterintuitive at first - after all, we'd normally expect things to run at their expected speeds when you're spending this much money on them - but as we saw in my Intel Core i9-9900K review, this is a chip that requires some substantial cooling to get the most out of it.

Indeed, I was able to comfortably overclock the GL12CX to run at a maximum speed of 5.1GHz before it conked out on me, which is a lot more impressive than the top speed of just 4.7GHz I managed with the processor when I only had a regular tower fan stuck on it. Overclocking didn't actually make a huge amount of difference to my benchmark scores, all told (its Cinebench R15 single core score increased from 212 to 216, while its multicore score went from 2080 to 2109), but if you're buying a three grand system with a £600 / $580 CPU inside it, I'd argue you'd want to make damn sure it runs as fast as Intel intended.

The only problem is that I'm just not convinced anyone really needs a Core i9 in their gaming PC right now. Sure, it will make your games run faster at 1920x1080 and 2560x1440, but when you've got an RTX 2080 in the trunk, I reckon you're much more likely going to be using this as a 4K gaming system where the difference between a Core i9 and its significantly cheaper Core i7-8700K / Ryzen 7 2700X rivals is practically naff all.

I can't speak yet to how Intel's new Core i7-9700K performs by way of comparison, but unless you're going to be using the GL12CX for some serious 'creative' applications like video editing, animation rendering or professional photo work, then I think you'll be much better off going for the GL12CX's cheaper specification rather than this one.

After all, you're still getting an RTX 2080 with the Core i7 system, which, as we've also discovered in my Nvidia GeForce RTX 2080 review, is about as fast as one of today's GTX 1080Ti cards - that is, at least when it comes to raw performance, because there's still no way of testing any of its Turing GPU's best features yet, such as its AI-powered and performance-enhancing DLSS magic or its fancy light reflection ray-tracing tech.

This should hopefully change soon, although given the delay on Shadow of the Tomb Raider and Final Fantasy XV's respective RTX updates (which were meant to arrive in October), it could still be several more months before the RTX 2080 starts to feel like good value for money. Instead, right now, it falls into pretty much the same category as its Core i9 CPU for me, in that it's another extravagant luxury item rather than a good use of your money.

Still, there's no denying this is a powerful piece of hardware, and you're pretty much looking at a system that can comfortably handle games at 60fps or above on max settings at 1080p and 1440p, as well as a steady 60fps on medium to high settings at 4K.

Elsewhere, I had to make a couple of tweaks to get a steady 60fps, but it didn't take much compromise to get the rest of my benchmarking suite running nice and smoothly. In Assassin's Creed Odyssey, for example, it managed a steady 54fps average on High at 4K, but you'll still get a perfectly playable average of 41fps if you opt for its top Ultra High setting at this resolution. Similarly, stick with Shadow of the Tomb Raider's SMAA anti-aliasing setting, and you'll see around 40-50fps on Highest, or closer to 50-60fps on High.

I also saw between 50-60fps in The Witcher 3 on High at 4K, but it was clearly more comfortable on Medium, with camera pans becoming a heck of a lot smoother once the frame rate reached 60-72fps. The same thing happened in Total War: Warhammer II as well. While High still produced a very playable average of 51fps in its battle benchmark, it was only once I switched to Medium that it jumped up to that perfect 60fps.

Final Fantasy XV was also a bit of tough customer for the RTX 2080 at 4K, especially if you want to use all of Nvidia's fancy hair, turf and lighting effects. Indeed, I had to turn all those off and settle for its Average quality setting to get anywhere near 60fps at this resolution (with High coming in around 40-44fps when rambling across the hills of Duscae), so if you're after the quadruple whammy of HairWorks, TurfEffects, Shadowlibs and VXAO lighting, you'll need to play at 2560x1440.

Not that there's anything wrong with using an RTX 2080 for playing at 1440p, of course, especially when it does such a damn good job of it, too. Indeed, across the board I was able to get 60fps or more on max settings with every game in my benchmarking suite at this resolution, making it a good choice for those with high refresh rate monitors as well as those aiming for 4K.

In terms of storage, you're well-served in overall capacity, but the speed of the GL12CX's primary drive leaves something to be desired. With the Core i9 spec, for instance, you get a 512GB Samsung branded NVMe SSD and a 2TB HDD, while the Core i7 spec nets you a 256GB NVMe SSD and a 1TB HDD.

Unfortunately, despite the Samsung DNA, the GL12CX's NVMe drive isn't anywhere near as fast as Samsung's 970 Evo. In the AS SSD benchmark, for example, the GL12CX's drive came in with a random 4K read speed of 32MB/s and a random 4K write speed of 107MB/s. That's 42% slower on reading, and 28% slower on writing. It's still fairly decent as these things go, but considering the rest of the PC's high-end spec I was hoping for something a little faster. The HDD, meanwhile, is as slow as you'd expect, so I'd use that for sticking your photos, music and lesser-used games on if you can possibly help it.

Overall, then, the Asus ROG Strix GL12CX feels more like a PC for bragging rights sake at the moment rather than one that's good value for money. Sure, it's a one-stop shop for a lot of the best components around today - which for some people will be as good a reason as any to go out and get it - but the benefits you'll gain over cheaper Core i7/GTX 1080Ti systems out there (which can be had for closer to two grand judging from a quick customisation spec I made up over at Scan) are arguably quite minimal.

I'm definitely not convinced about the need for a Core i9 right now, and while the RTX 2080 may well start to show its true value over the GTX 1080Ti once developers start getting their various RTX updates out there (see here for a full list of all the confirmed RTX games so far ), it's still too early to say whether the potential performance gain is really going to be worth all that extra cash. There are still a couple of weeks before the GL12CX goes on sale, of course, but for now I'd advise to hold off a little while longer to see if Nvidia's proposed RTX updates can shift the goalposts in Asus' favour.