Built using the same Zen 2 architecture and 7nm manufacturing process as the rest of AMD's Ryzen 3000 family, the Ryzen 5 3600 is effectively a slightly slower, but more energy efficient version of its X-rated sibling, the Ryzen 5 3600X. It's still got six cores and twelve threads under its hood, for example, but whereas the 3600X had a base clock speed of 3.8GHz, which was able to rise to 4.4GHz, the regular 3600 starts at 3.6GHz and maxes out at 4.2GHz.

That's still pretty fast in the grand scheme of things, though (even Intel's Core i5-9600K's base speed is only a fraction quicker at 3.7GHz, for example), and it also has the added bonus of only requiring 65W of power, as opposed to the 95W you'll need for the 3600X and 9600K. 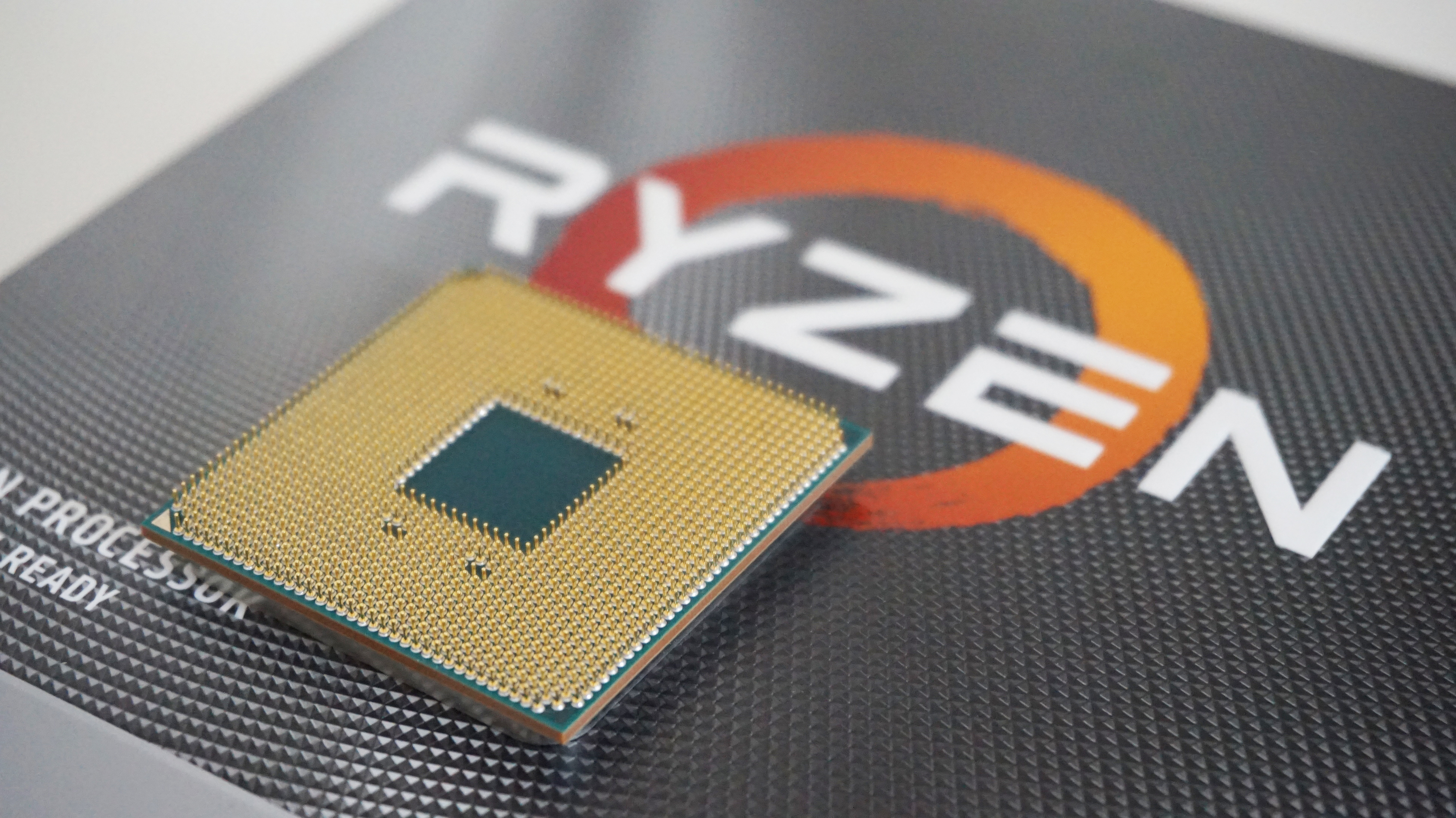 Is it really worth skimping the extra £20 / $50 and getting the Ryzen 5 3600 instead of the 3600X, though? Well, if you only use your PC for gaming as opposed to more advanced tasks like photo and video editing, then the answer is almost certainly a resounding 'yes'. I should note, of course, that (as I've mentioned in previous gaming CPU reviews), getting a truly accurate picture of what your CPU's doing while playing games is still a pretty difficult task.

There are several other factors that can affect your PC's gaming performance, for example, such as your graphics card, the type of RAM you’ve got, and even what type of storage you’ve installed the game on, and there's also the additional problem that a lot of PC gaming benchmarks just don’t test your CPU properly.

Fortunately, a handful of gaming benchmarks have got a lot better at this recently, with the likes of Shadow of the Tomb Raider, Forza Horizon 4, Assassin’s Creed Odyssey and more all providing an in-depth look at your CPU’s performance as well as what your graphics card’s doing. As a result, I’ve done the best I can with the equipment available to me, but you may want to read around a bit more to get a better picture of things. I’ve also only focused mainly on gaming performance in this review than I have on, say, application performance or media creation bits and bobs because, well, I’m not really interested in that. I’ve included some cursory Cinebench R20 results below to give us a rough idea of how each CPU stacks up for single and multicore desktop tasks, but really, my main goal here is to work out what CPU is the best for gaming and gaming alone.

With that in mind, then, let's take a look at some lovely graphs - and as you can see, the Ryzen 5 3600 is pretty much up there with its X-rated sibling across each of my four test games at 1920x1080. It was a couple of frames slower in Total War: Warhammer II and Forza Horizon 4, admittedly, but really, we're talking such a small difference here that I doubt you'd be able to notice it in-game without the aid of a frame rate counter. 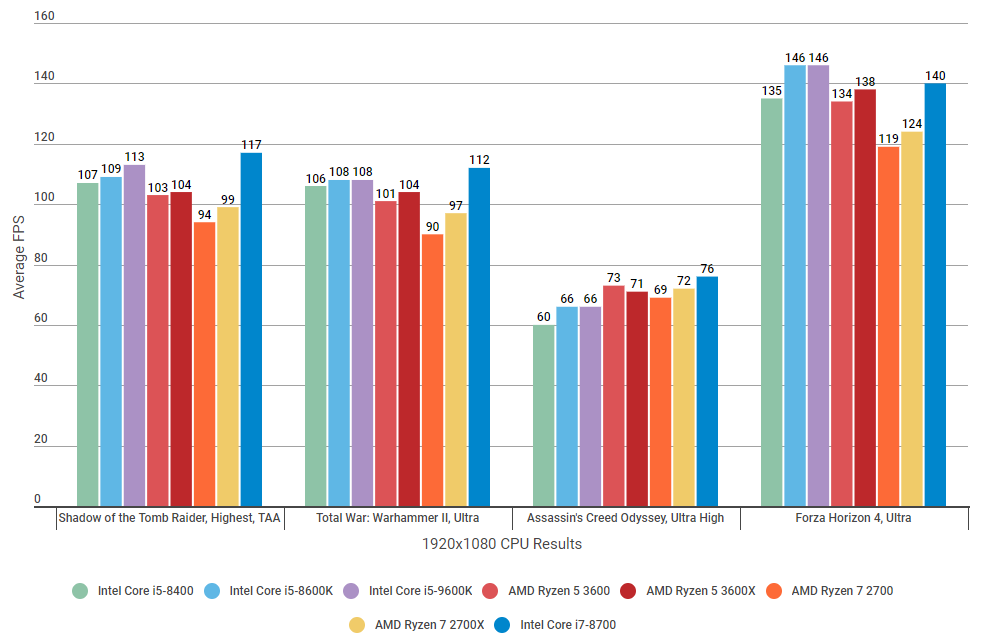 Of course, it's difficult to say whether you’ll see exactly the same kind of performance gap on a more mid-range-level graphics card – the kind you’re more likely to be pairing with a CPU like this, such as our best graphics card recommendations, the Nvidia GeForce RTX 2060 or AMD’s Radeon RX 5700, for example - but on the whole I reckon it still puts in a pretty good showing against Intel's light purple Core i5-9600K results.

What's more, when you start bumping the resolution up to 2560x1440, any performance gap you had at 1080p is pretty much eliminated, putting pretty much every mid-range gaming CPU you can buy today on a level playing field. It's also worth pointing out that both the Ryzen 5 3600 and 3600X absolutely trounce AMD's 2nd Gen Ryzen 7 2700 / 2700X CPUs regardless of whether you're playing at 1080p or 1440p in today's games, so don't be tempted to pick them up on the cheap over these two processors just because they've got a seven in their name instead of a five. 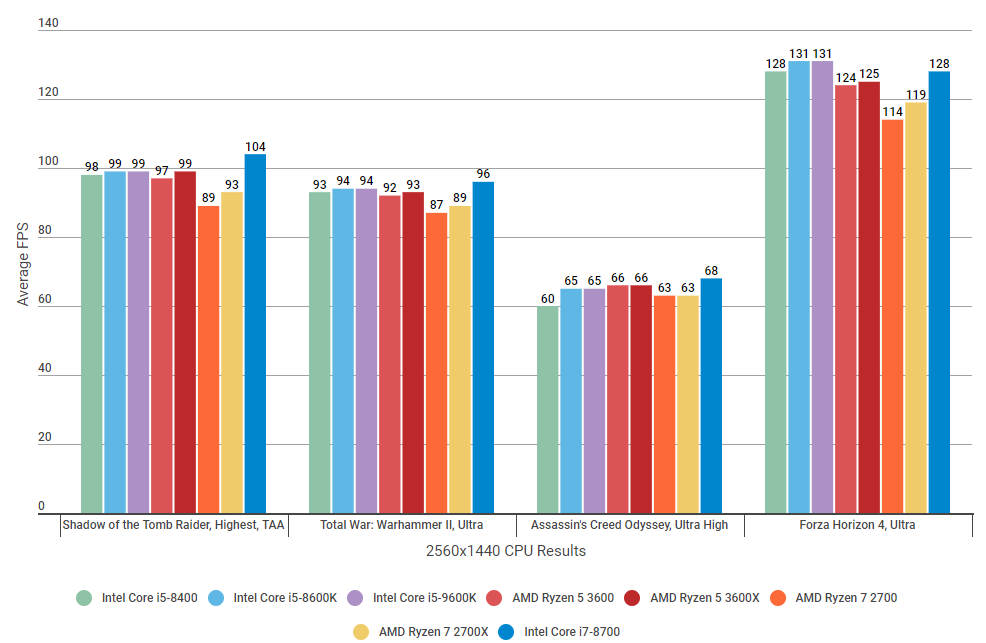 The Ryzen 5 3600 also performs well as a general desktop CPU as well. As I mentioned above, I'm not quite as bothered about how well a processor does in niche and expensive creative applications and the like, as that's not what I use my PC for. Nevertheless, I was particularly impressed with the 3600's single core score in Cinebench, as this came in 5% faster than the stock, out of the box result I recorded for Intel's Core i5-9600K.

The 9600K regained its ground when I started overclocking it, admittedly (I didn't overclock the Ryzen as I'd lose all of its clever Sense MI gubbins as well as its Precision Boost 2 and XFR, or Extended Frequency Range tech), but considering AMD's often trailed behind in this area in the past, it was great to see it going toe-to-toe with Intel's chips right from the get go. 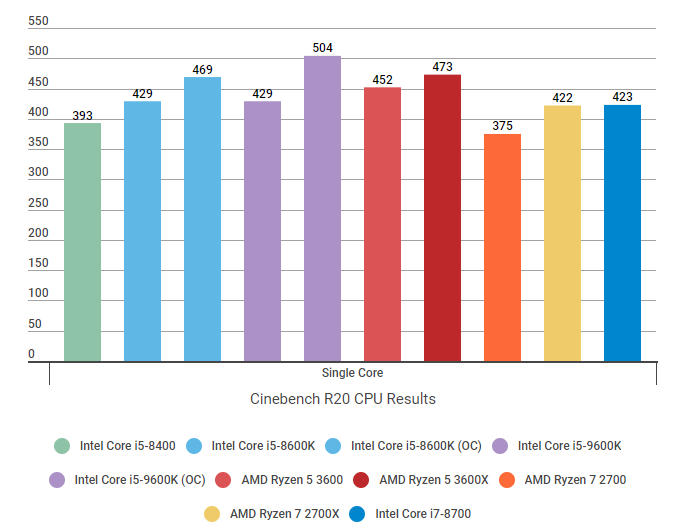 And, of course, it absolutely rinsed Intel on the old multicore performance front - as you'd probably expect given a) AMD's always performed well in this area, and b) it has double the number of threads as the 9600K. In fact, it's pretty much neck and neck with AMD's eight-core / sixteen-thread Ryzen 7 2700 here, which is pretty good going considering it's still a mid-range CPU. 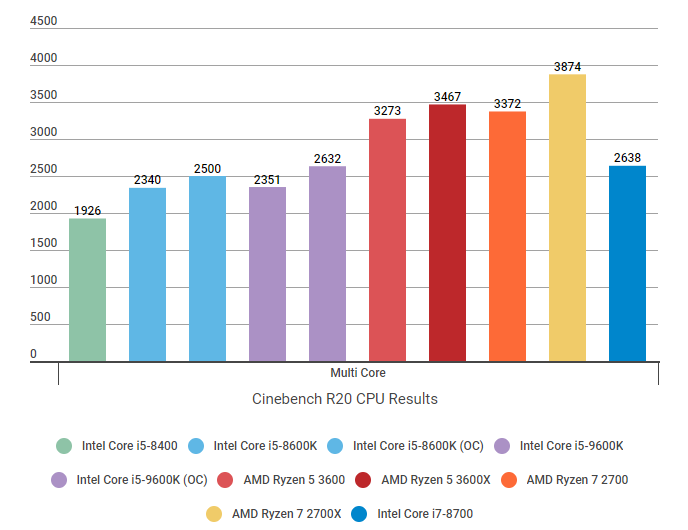 Overall, then, the Ryzen 5 3600 is incredible value for money, especially if you're buying in the US where prices for the 3600X and Core i5-9600K are still a good $50 more expensive (not to mention the extra expense you'll need to factor in for a cooler if you go down the Core i5 route). While not quite as fast on the old gaming front as either of its main rivals overall, it's only a hair's breadth behind in a lot of cases, which in my eyes is more than an acceptable shortfall given its lower cost.

In the UK, though, you might as well spend the extra £20 and get the 3600X if you're buying one right now - although if prices start creeping back up towards its original price of £240, I'd definitely recommend dumping the X off and sticking with the regular 3600 instead.

As a result, while the Intel Core i5-9600K is still probably the absolute bestest best gaming CPU for mid-range PC builders right now, the Ryzen 5 3600 is my new 'best gaming CPU you should actually buy' recommendation for those who'd rather save themselves a bit of cash and favour ease of use over the fastest possible gaming speeds.