For years, the AOC G2460PF has been sitting atop our best gaming monitor list unchallenged and undefeated. With its sub-£200 / $200 price, 144Hz refresh rate and superb TN panel, it's by far one of the best screens around for those on a budget. The only problem is that it's getting on a bit now, and is becoming increasingly difficult to track down. Enter AOC's C24G1. Priced at just £173 / $145 at time of writing, this 24in, 1920x1080, 144Hz, FreeSync monitor is even cheaper than the G2460PF and its curved VA panel is just as good. Here's wot I think.

I must admit, I was fully expecting the C24G1 to be another AOC G2590PX-style disaster when I first got it out of the box. That gaming monitor, you may remember, was meant to be the successor to the G2460PF, but was completely spoiled by a horrible grainy screen coating that made everything look fuzzy and hard to see.

Thankfully, there was no such grain effect to be seen here, and the quality of the C24G1's curved VA panel impressed straight out of the box. When I plonked my X-Rite Display i1 Pro colour calibrator on it, for example, it's default Warm colour temperature profile was already displaying a whopping 98.8% of the standard sRGB colour gamut. That's top tier stuff for such a cheap monitor, and I was equally pleased to see a lovely high contrast ratio of 3006:1 and a low black level of just 0.08cd/m2 (the closer to 0.00cd/m2, the better).

The C24G1 does have other colour temperature modes, of course, as well as three specific gaming modes, but none of them were as accurate as Warm. Indeed, when I tried tweaking its User colour profile, I only ended up with an sRGB coverage of 89.2%. As such, I'd recommend leaving the C24G1 on its default settings. After all, with a colour accuracy score of almost 99% straight out of the box, there's really no need to go poking around its onboard menu settings.

Its peak brightness of just over 250cd/m2 was a little more mediocre, admittedly, but that's still more than enough for everyday use in a brightly lit room. You may run into a few issues if you happen to find yourself in a beam of direct sunlight, as I found when a rogue bit of autumn sunshine came streaming in through my window, but on the whole I don't think you'll run into too many problems here.

The only other minor worry I had was the monitor's viewing angles. Everything is absolutely fine if you're looking at the monitor head-on, but the light curve of the panel can create a teensy bit of colour shift when you're looking at it from an angle. I'm not overly concerned, though, as the effect was only very slight most of the time - mostly on the taskbar, as opposed to my main desktop - and its height-adjustable stand gives you plenty of tilt and swivel flexibility to find the right position. Plus, most of the time you're going to be facing it straight on anyway, and probably won't even notice it. 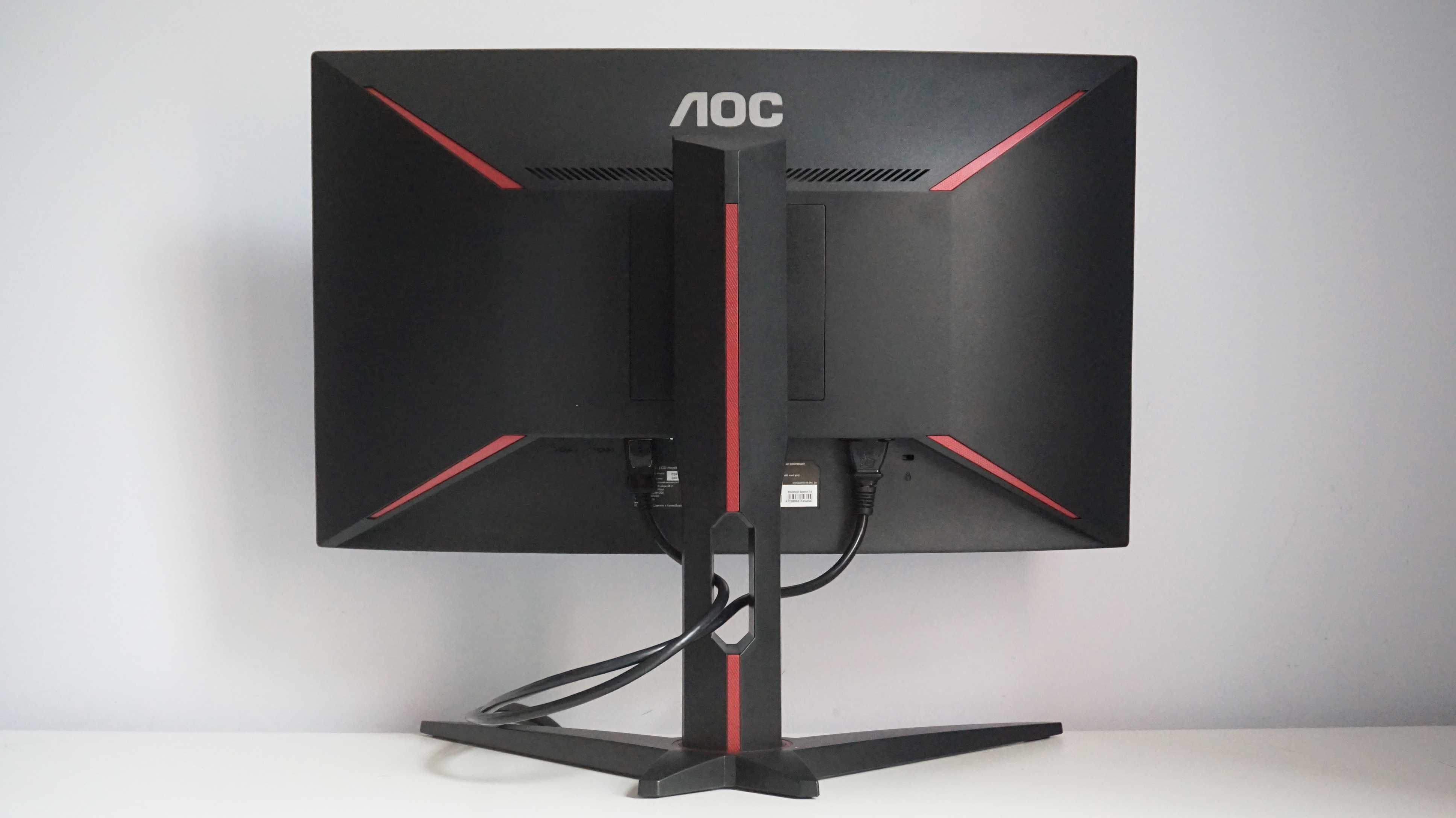 I was also pleased to see it played nicely with my Nvidia graphics card, too. Technically, it's an AMD FreeSync screen, but thanks to Nvidia's recent G-Sync Compatible driver, which lets Nvidia graphics card owners take advantage of the variable refresh rate tech on AMD FreeSync monitors, I can still enjoy a super smooth gaming experience that's completely free of screen tearing and stutter.

It hasn't been certified as one of Nvidia's official G-Sync Compatible monitors yet, I should note, but Nvidia are still in the process of testing all of the FreeSync monitors out there, so it's highly possible it may yet join its select list of screens in the near future. Indeed, I was able to play Doom using the C24G1's full 144Hz refresh rate with no problems at all. No flicker, no screen tearing and no horrible screen blanking either - as can sometimes be the case on FreeSync screens that don't play nicely with the Nvidia driver. 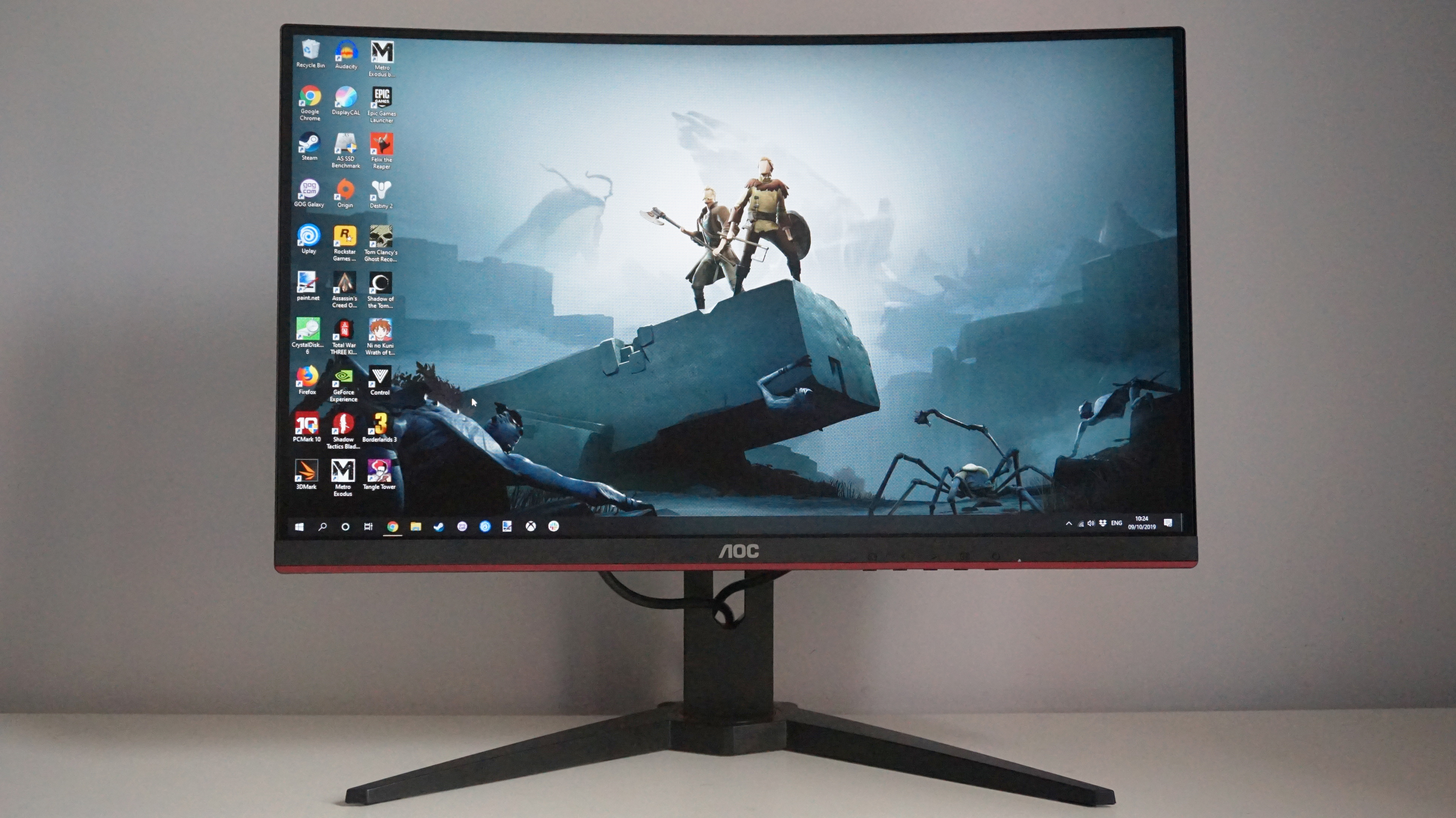 All in all, the AOC C24G1 is a very fine gaming monitor indeed and a more than worthy successor to the G2460PF's budget crown. Yes, the C24G1's pronged feet and red highlights are a bit shoutier in the 'I'm a gaming monitor!' department than the round, flat base of the G2460PF, but I'd take its slim bezels and borderless frame over the G2460PF's chunky design any day of the week. I also can't overstate how much I prefer threading my cables through the C24G1's stand as well, as opposed to having a chunky plastic red clip like the G2460PF.

The only thing the C24G1 is really missing is USB ports. The G2460PF had four of these crammed into its already feature-packed stand, but I guess that's one of the few downsides of shrinking down the monitor's overall size. There simply isn't anywhere else to put them. Still, I'm willing to overlook this here, especially given the monitor's low price and its superb, out of the box colour accuracy. It's rare to see a monitor with such an outstanding panel at this end of the pricing spectrum, and it even beats the G2460PF's default sRGB score of 95%, too. Plus, you get all those lovely extras like a height-adjustable stand and a super smooth 144Hz refresh rate, all without spending over £200 / $200.

If you're looking for the next best budget gaming monitor, it really doesn't get much better than the AOC C24G1.