Apex Legends' Ping system is the gold standard for non-verbal communication in games. This marker system is not a new idea, but Respawn have refined it and made it so very easy to use to communicate with your teammates in such a variety of ways, that it's no wonder it was all anyone could talk about when Apex first released. Our Apex Legends Ping guide will walk you through everything that you can use the Ping system for, from marking an enemy to contextual pings on specific items and interfae sections, responding to the Pings of your teammates, cancelling your previous Pings, requesting heals or ammo... the list goes on, so let's just get started. 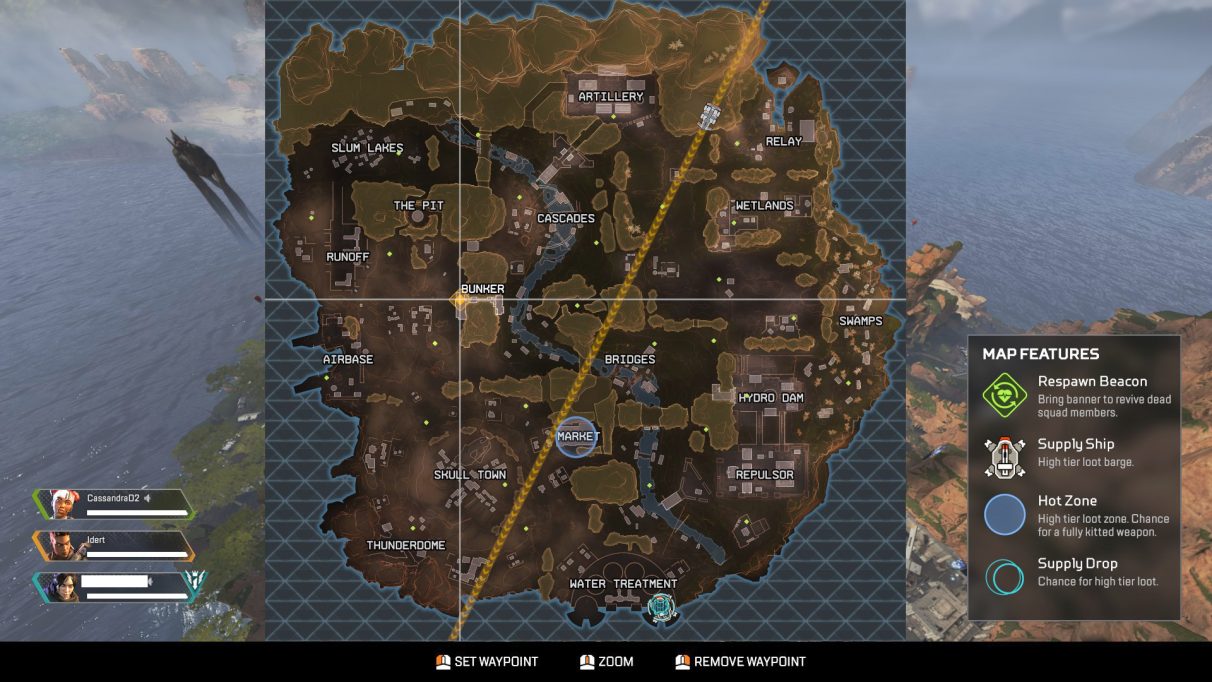 We've been hard at work since Apex's release putting together our own series of guides on the game, all of which you can peruse from our Apex Legends tips. From there you can find links to all our other pages, so whether you want to find out about the stats and spray patterns of all the Apex Legends guns & weapons, or you want to know where to go to find the very best Apex Legends loot, we've got you covered.

How to use the Apex Legends Ping system

The Ping system as a whole is the name given to the various uses of the Ping function, which creates what is called - yep, you guessed it - a Ping wherever you point your reticule during a match. So you can point at anything you like in a game, and hit the Ping key, and a coloured marker will appear on the spot you were aiming at, which is visible to your teammates but not your enemies.

These Pings can be used in various different ways, and will always be accompanied by a line of dialogue from your character (again which can be heard by you and your teammates but not your enemies) relating to the specific situation in which you used the Ping. For example, you can use it to indicate the presence of an enemy, and your Legend might say "enemy spotted"; or you might Ping a Carbine lying on the floor, and your character will say "R-301 here."

Key to success in Apex Legends is communicating well with your team, and Respawn have evidently put a great deal of time and thought into making the Ping system easy to use and understand. So try to use it whenever it would help your team. The below sections will explain in more depth all the functions, both basic and hidden, of the Ping system in different situations. 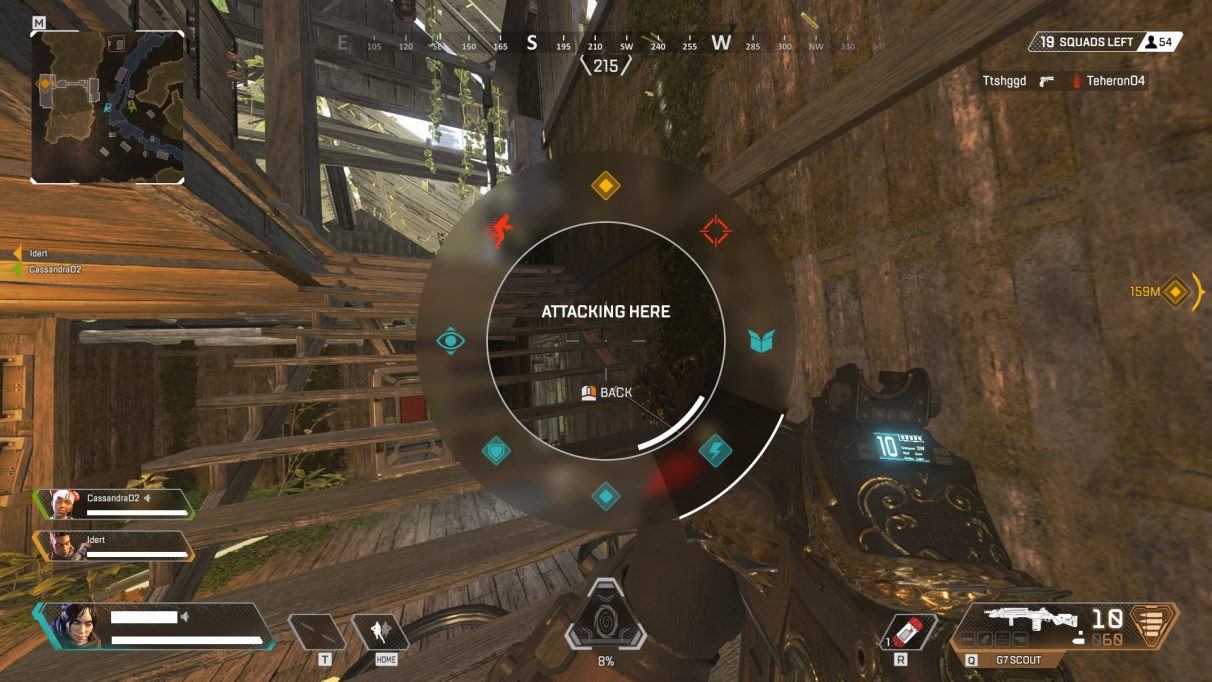 The basics of using the Ping system is as follows:

This Ping Menu is extremely useful for adding further clarity to your communications with your team, and we'd suggest learning the different options available on the Ping Menu so that you can call upon any of them at a moment's notice. The below table indicates the different options on the standard Ping Menu(yes, there's more than one Ping Menu, more on this later), starting at the top and moving clockwise.

You may have heard your teammates at times calling out lines such as "I need healing!" but you haven't been able to find out how to do this yourself. Well look no further!

You can request healing items in two ways: 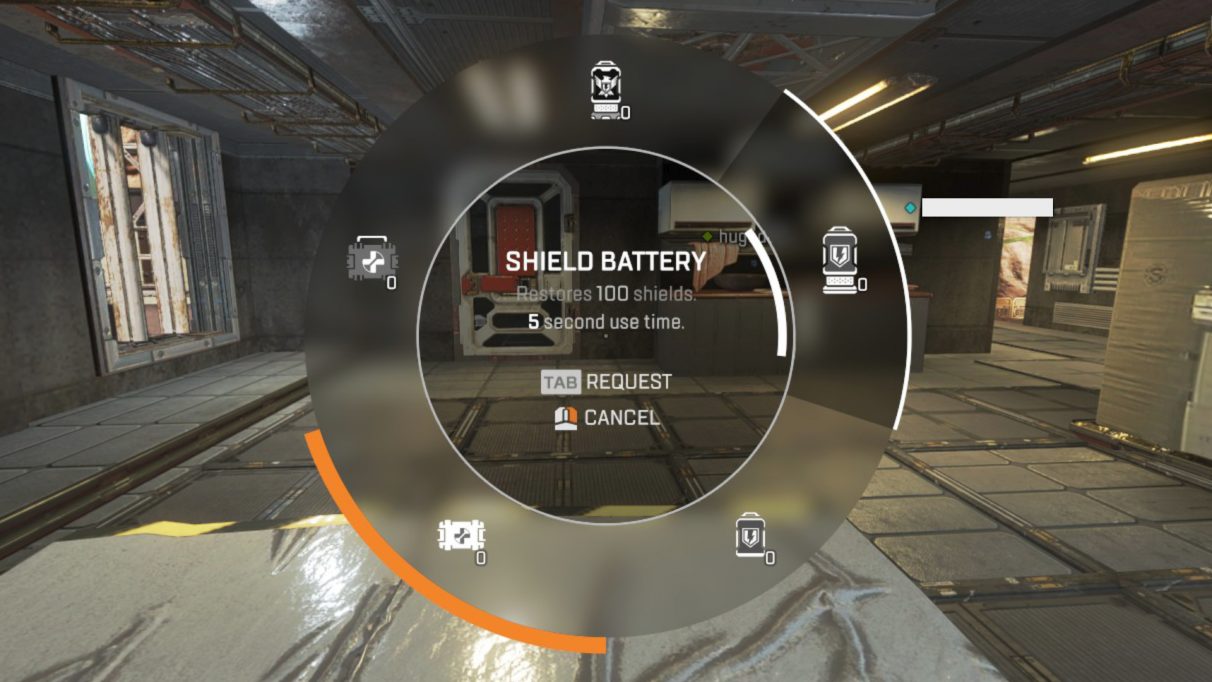 Oh, and you can do this regardless of how much damage you've sustained. So if you are at full Health/Shields but would like a few more healing items equipped ready for the next fight, then just use the above tip to request them of your teammates.

Contextual Pings are created when you Ping a specific object. This can be anything from a piece of loot on the ground to a Supply Bin or even a Supply Ship hovering in the air. Apex Legends is quite clever when it comes to understanding your intention when you use the Ping action, so you should make a point of learning what happens when you ping different objects.

Your character's accompanying dialogue may also go into further detail about the type of object you have Pinged, which can be exceptionally useful. If you were to Ping an Epic (purple) Extended Heavy Mag attachment on the floor, then your character will say "Extended Heavy Mag here, Level 3" as an indicator not only of the item itself but also its quality. Similarly, if you were to Ping an Optic attachment lying on the floor, you might here "Optics here, close-range" or "Optics here, sniper" depending on the zoom level of the scope itself.

One extremely useful function of the Ping system in Apex Legends is that you can use it on specific items or points in your inventory UI in order to request certain items of your teammate. This works well for attachments, for example. If you have a gun with an empty Barrel attachment slot, then your character will let your teammates know that you are looking for a Barrel Stabiliser for your gun.

One less well-known feature of using the Ping system in your inventory is that if you are in need of a certain type of ammo, you can Ping the ammo icon next to your gun (not the ammo in your inventory) and your character dialogue will let your teammates know, "I need shotgun ammo!" or "I need energy ammo!". Quick and easy communication. 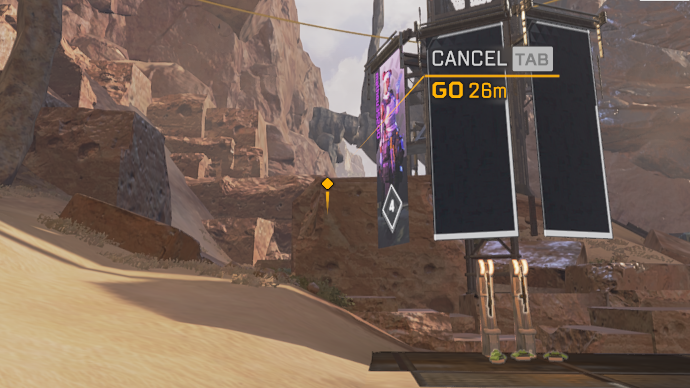 Sometimes you might misclick while Pinging a location, or you might change your mind about heading in a certain direction. In these cases, don't fret; all you need to do is hover over the diamond at the top of your Ping indicator, and hit the Ping key again to cancel it. If you cancel a Ping soon after placing it, your Legend will call out something like "forget that" to alert your teammates to the fact that it was a mistake.

This is also useful if there's a Ping left on the map from earlier in the game and you want to remove it so it doesn't distract you anymore. But bear in mind that you can't cancel your teammates' Pings - only your own.

There are several opportunities to respond to specific actions by a teammate of yours. One example is if you pick up an item that they dropped, whereupon an indicator will appear to the lower-right of your screen saying that if you hit the Ping key now, you will thank your teammate for dropping that item.

Similarly, if a teammate Pings an item on the ground such as a weapon, then you can Ping their indicator in order to call "Dibs" on that item. This has the useful effect of keeping that specific ping indicator on your screen for longer; though in terms of preventing your bastard of a teammate from snatching it up before you can reach it, there's unfortunately nothing that calling "Dibs" will do to prevent that.

But the main way to respond to teammates' actions is to respond to their own Pings. If a teammate Pings an area and says "let's explore this way", then you can aim at the diamond at the top of their Ping indicator, and hit the Ping key in order to agree with/acknowledge their suggestion. 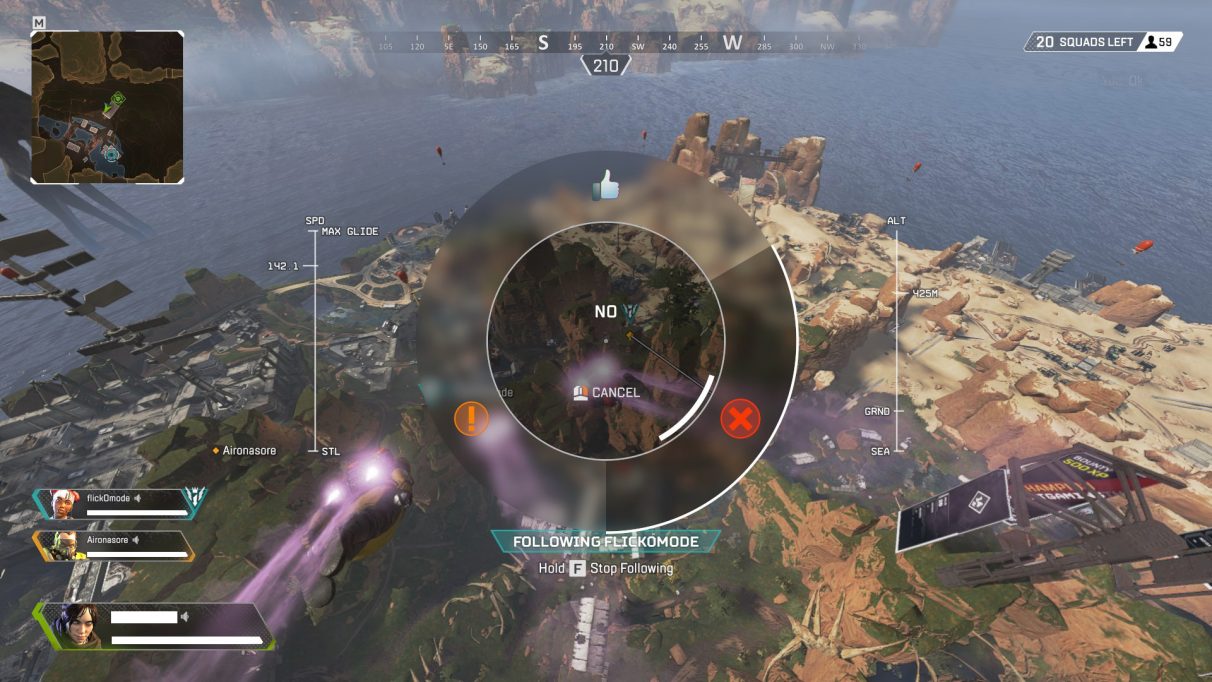 However, you can also bring up a contextual Ping Menu (different from the primary Ping Menu) when hovering over a teammate's Ping, where you may find you have further options, such as "No", or "I can't do that". These options add another layer of depth to your communications with your team; and it's also worth noting that these same options apply when you're picking a location to land at the beginning of a match.

This one is fairly obvious, but it's still useful to go over for those who didn't realise it. So far all we've discussed is how to use the Ping system in first-person view or in the UI, but if you want to Ping an area of the map outside of your current first-person perspective, all you need to do is open the Map up and click on your desired location in order to drop a "Go" Ping there.

This is particularly useful for suggesting areas to land at the beginning of a match - and incidentally, it's a very good idea to Ping your desired landing location ahead of time, because when you hover over it, it will tell you how many metres away you are from that location, which has a bearing on your descent. For more information on landing faster than those around you, check out our Apex Legends landing guide. 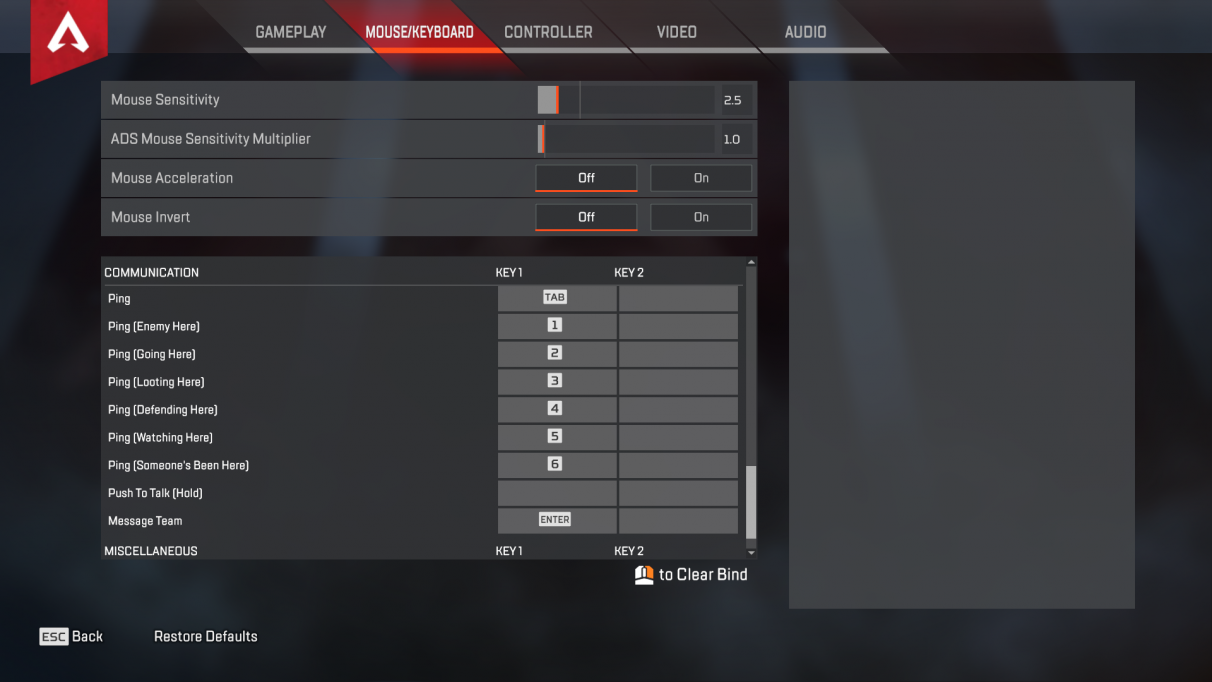 At any time in-game or in the main menu you can head into Settings in the Mouse/Keyboard tab, and at the bottom of the list under "Communication" you'll see that you can customise your keybinds for any of the main Ping Menu options, such as "Enemy", "Looting", "Defending", and so on. So if you're finding it annoying to double-tap Ping to highlight an enemy, or to go into the Ping Menu whenever you want to say that someone has been here, then assign new keys to these actions and you're good to go.

That's everything we've got on the Ping system, so hopefully this has brought you up to speed on all the things you can do with Apex Legends' fantastic method of in-game communication. Be sure to check back here every so often, because we're all still learning the game and it might be that we've missed out on a few tricks and hidden functions! If you know of any such tips and tricks relating to the Ping system, do let us know in the comments.