If you click on a link and make a purchase we may receive a small commission. Read our editorial policy.
Developer: Aurora44
Publisher: Annapurna Interactive

In most video games, you’re the hero. You might be the foretold chosen one or of more humble means, but in any case, the game still revolves around your agency and impact on the world. This fantasy falls apart quickly in multiplayer games, where if everyone is the hero, then surely no one is.

Ashen might have the solution to this. Join a friend or stranger on a quest, and you'll unknowingly step into the shoes of an NPC while still appearing as the hero from your own solipsistic screen. “It’s kind of confusing, but when you play it, it’s so natural that people don’t care,” laughs developer Aurora44’s creative director Derek Bradley. 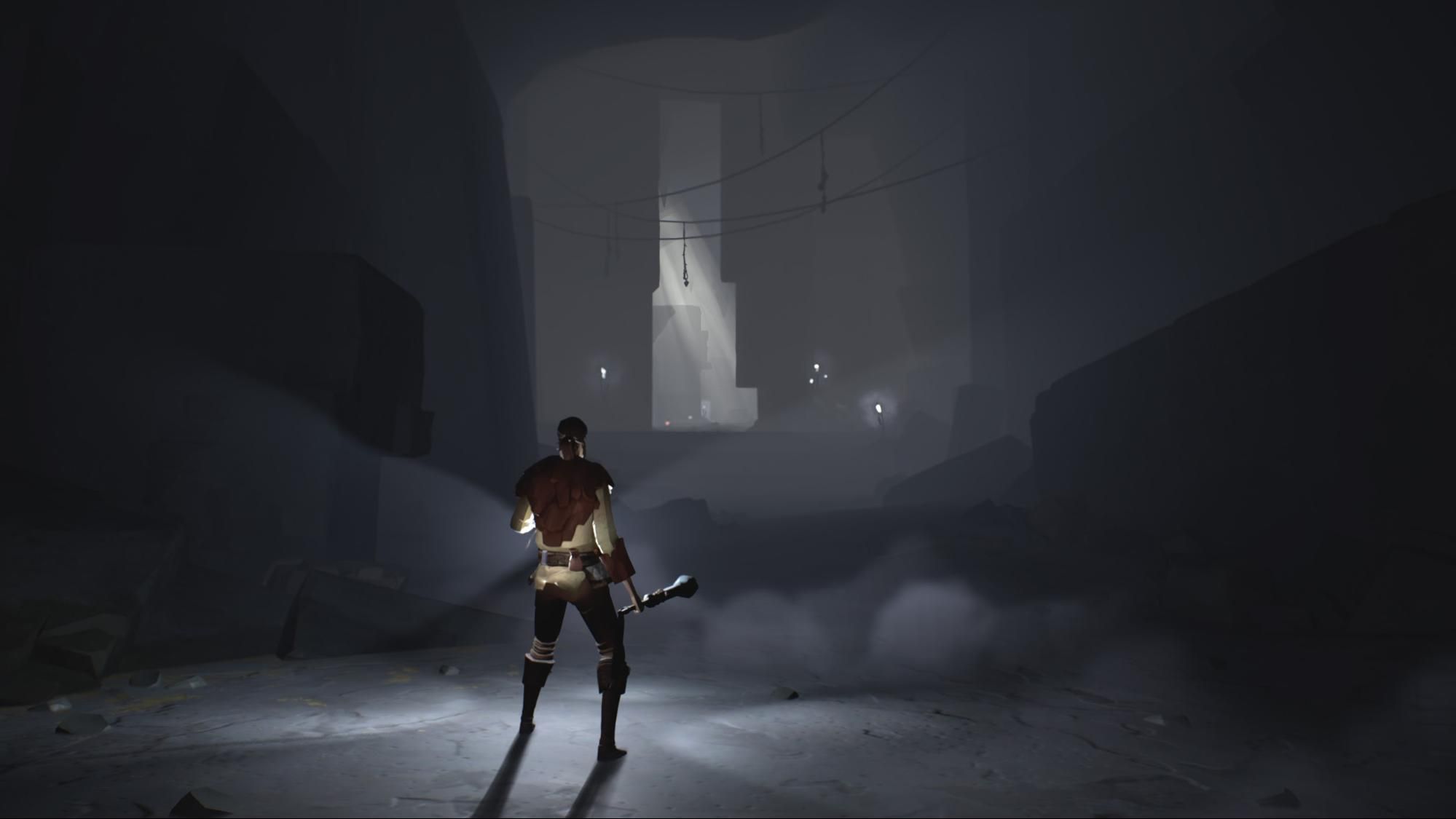 From what’s been seen of Ashen so far, most people will probably compare it to Dark Souls, what with it being a third-person action RPG with challenging stamina-based combat set in a world shrouded in darkness. It also takes inspiration from minimalist co-op sand-surfing simulator Journey, in which you’d be randomly paired up with another player you could work with to progress.

It’s the latter where Ashen really leans into for its multiplayer, but with a twist. While in Dark Souls you summon a phantom player from a parallel dimension, in Ashen those other players essentially possess one of the game’s many NPCs. 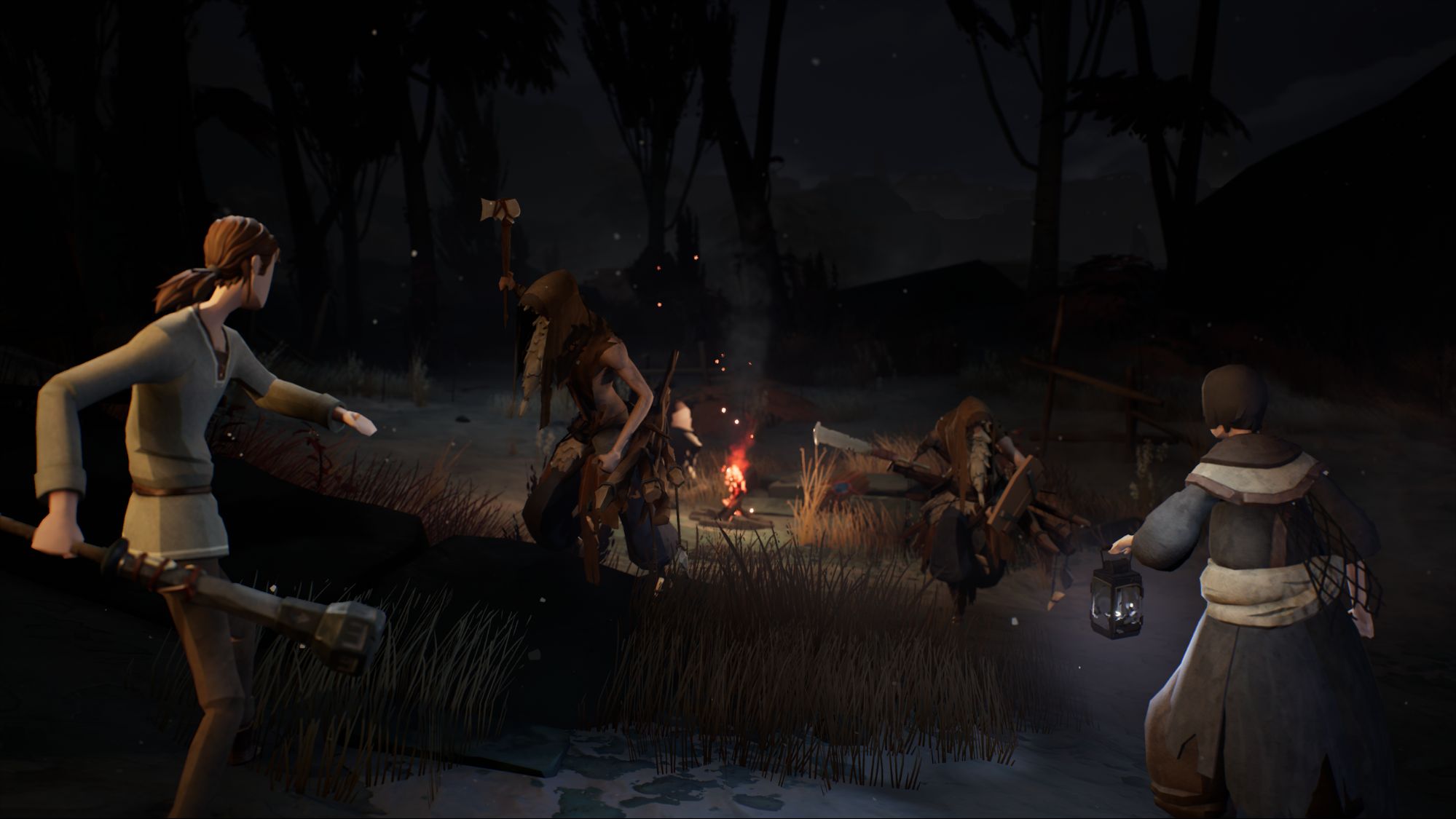 Take one of the very first characters you meet, a moustached pipe-smoking chap called Jokell. At first, he’s your regular AI-controlled NPC who helps you clear out the enemies in an area that becomes your town hub. When he joins your town, he’s still behaving like most NPCs, standing in one spot and operating as quest giver.

But once you take up a quest, Jokell accompanies you, and it’s here that control cedes from the programming to another player. On the flipside, from that other player's perspective, they're still in control of their own protagonist while it’s you controlling Jokell. “You’ll both think you’re the hero when you’re playing with each other. It’s quite an interesting technology to get players to unknowingly roleplay,” Bradley explains.

It’s almost an asymmetrical form of multiplayer in terms of how a quest is experienced. Think of a single-player game where you’re partnered with an AI companion - they might be a veteran mentor you’re following, or vice versa. In either case, these relationship dynamics are predetermined. In Ashen, you’re basically playing both the hero and the support in parallel, which can make for an unpredictable dynamic in a quest, since you’re matched to another player anonymously each time. 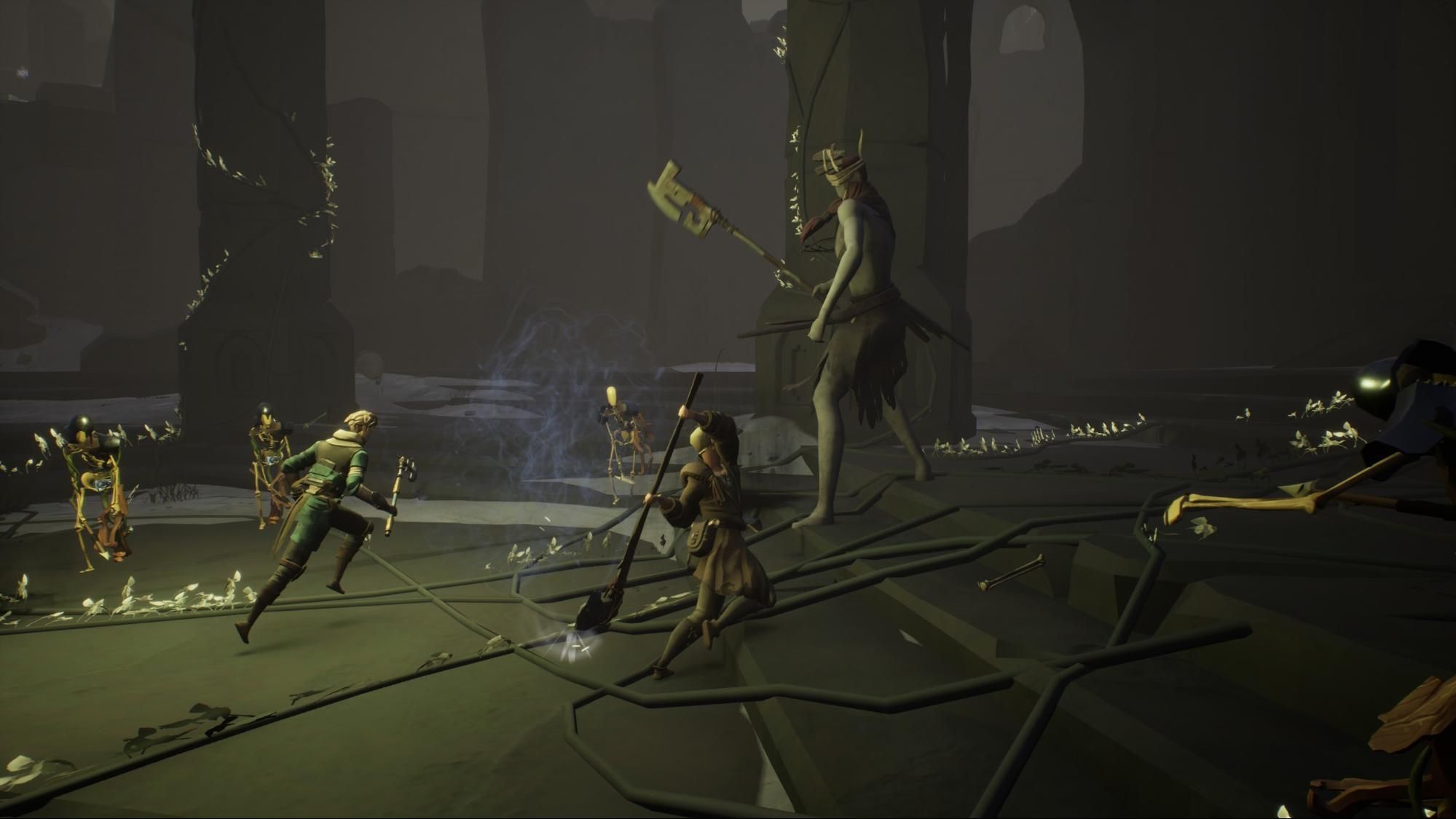 Bradley talks me through one early scenario with Jokell, where he asks you to help him find his brother’s lockbox. “The way we’ve written it means he’s very engaged in wanting to find the lockbox, but at the same time if I lead him, it’s not character-breaking. But if he leads me, it makes sense,” he says. It potentially means you could be teamed up with a Jokell who knows the path and will gladly lead the way, or on another run, he might not be sure at all, in which case you can take the lead. Or, no doubt for players on day one, it may just be the blind leading the blind.

“In that case, he literally is an NPC looking for his brother’s lockbox, but he doesn’t know!” Bradley laughs. “That’s the magic - the same quest gets played out in different and organic ways.”

Getting this involuntary role-playing to feel consistent between the many different NPCs you meet and recruit, from a peg-legged character to a giantess twice your height, sounds like a challenge. But the fact that they’re all faceless easily allows players to assume another role and not literally judge each other at face value, while in-game communication is limited to simply beckoning your companion over or pointing at something. There’s also no rigid class system so characters are free to wield and swap weapons at any time. Was Jokell a swordsman on your first encounter and now suddenly merrily chucking spears? Well, it’s not out of character, anyone can do that. 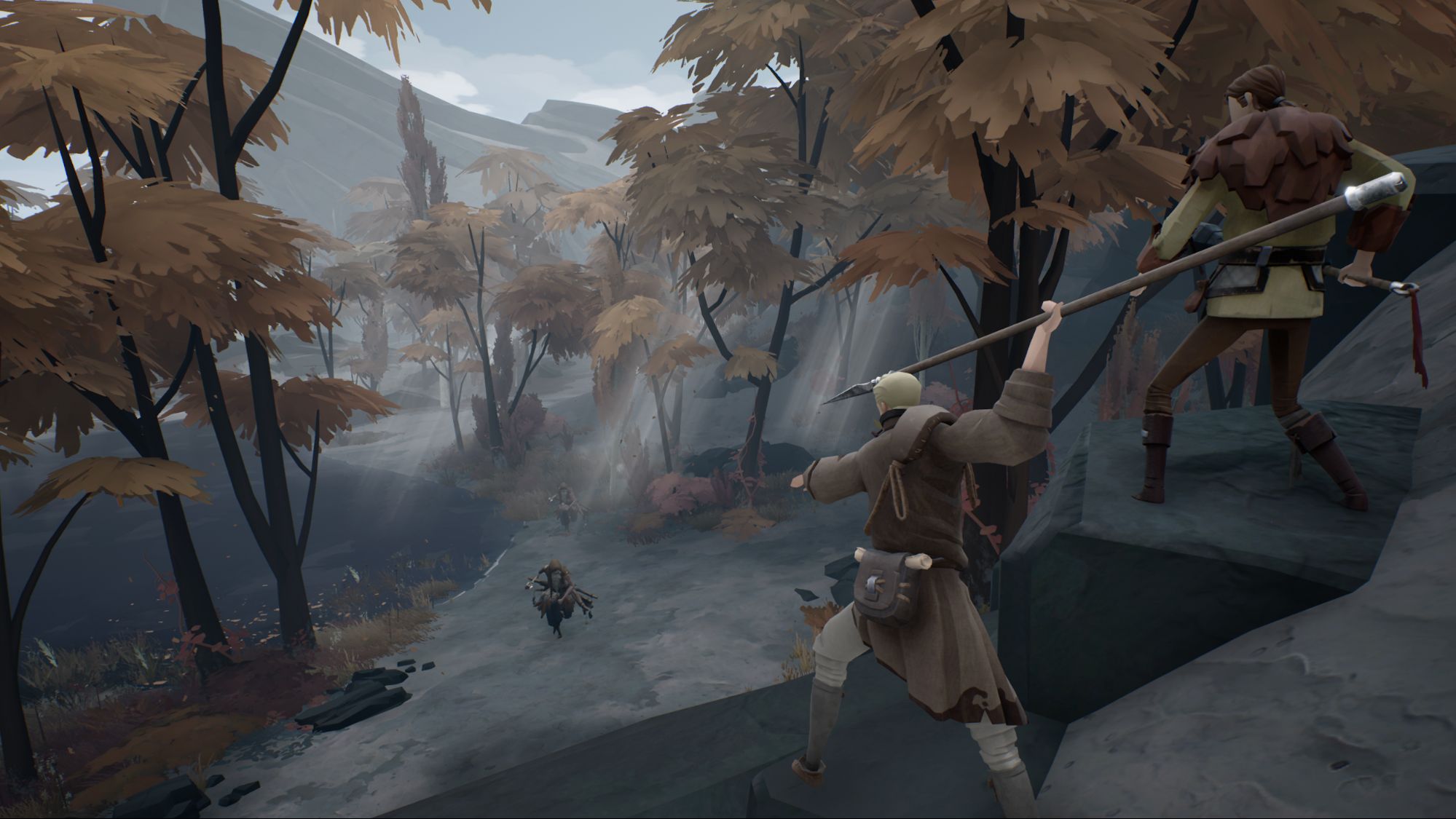 That doesn’t mean you won’t find players sticking with some more unusual perks, such as talismans that grant you elemental attacks or a relic that allows you to return from the dead to keep fighting in an ash-wraith form. Ultimately, Bradley says they decided to retain these in multiplayer: “We found that the interest players got from having not discovered something and then seeing someone else popping into their world with that thing was worth having a fuzziness around it.”

In any case, the game’s matchmaking is filtered through quests and how far you’ve progressed, which should keep players at a similar level of experience and expectation. We’ve all had those times where you’re matched with a pro who single-mindedly charges ahead to the goal and leaves you in the dust. That’s something Ashen's developers are keen to avoid.

Despite all of this, Aurora44 is also fine to let you play however you like. So although the idea is that you’re connected with an anonymous player each time, you can also set the options to match you with friends. And while dungeons and puzzles are designed for two players to solve them together, experienced players can also find a relic that lets them play the entire thing solo. In fact, if you want to just play it offline, the AI has been programmed to let you do that. 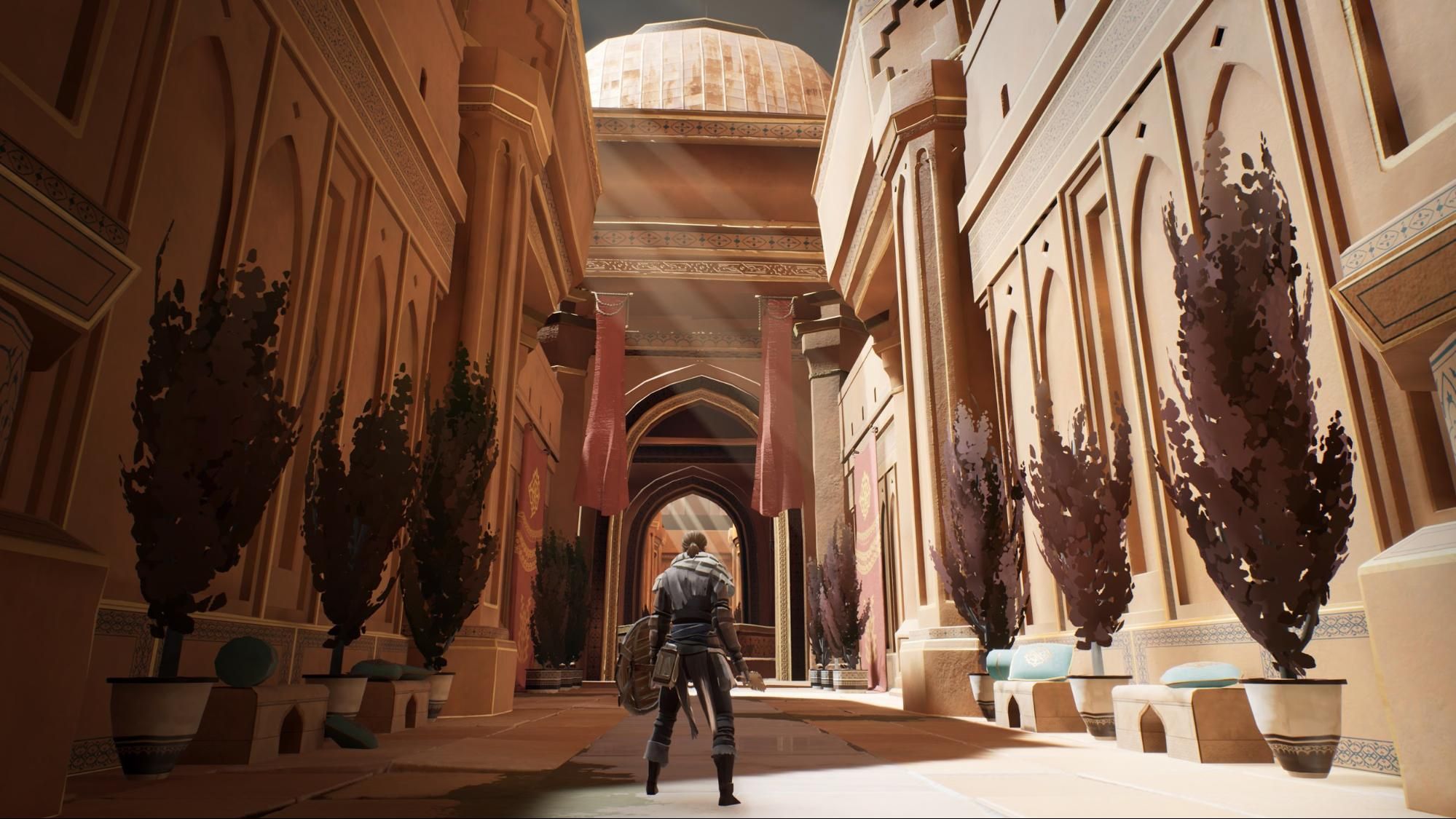 The last point sticks out, since Bradley tells me that the core idea behind Ashen was always about how about how the studio could get players to emotionally invest in and believe in NPCs. Wouldn’t letting players opt out of the default undermine this, and if you have a smart enough AI companion who can fulfil your question functions, can players even differentiate between AI and anonymous human companions anyway? “As designers and developers, we enjoy the underpinnings,” he admits. “But at the end of the day we want somebody to just turn it on and enjoy the experience.”

Bradley also mentions that the fleeting relationships between random players is inspired by a Japanese concept ‘ichi-go, ichi-e’, loosely translated as “for this time only, never again”, which may also come to describe the game as a whole. Whether it can retain a sense of magic and mystery when everyone’s going in blind at launch, as well as a year later when wikis are a click away, is another matter.