Baby Yoda, the Yoda that's also a baby, is coming to Star Wars: Squadrons as part of a new set of decorative ship bits. New Republic pilots will be able to have the breakout star from Disney's Galaxy High School Musical sitting on their dashboard, though it's only a model - he won't be fiddling with your radio. EA have said they've no plans for post-launch content and it seems this is just a cheeky bonus to market season two of the Disney+ show.

EA say the Mandalorian Supply Drop will bring eight new cosmetics: one hologram, decal, dashboard flair, and hanging flair for each faction. Yes, they are faction-locked, because Empire bullies can't be trusted to be nice to the baby. All these are arriving for you to unlock tomorrow, Wednesday the 28th. 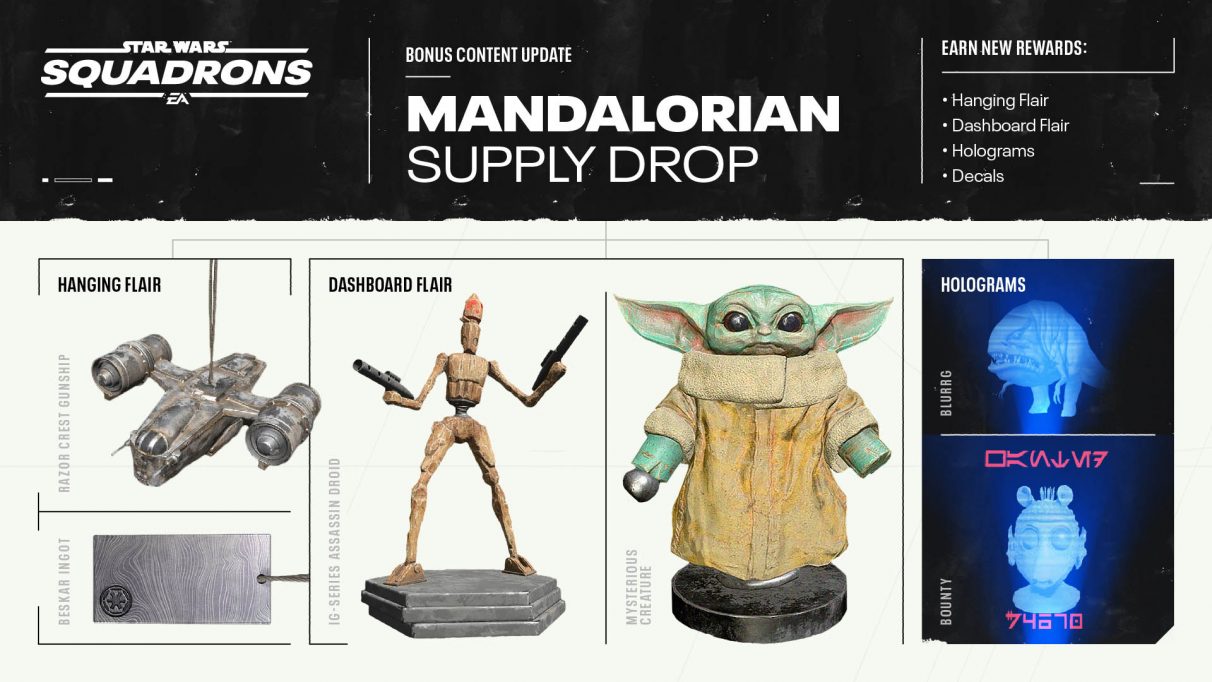 Why would any pilot have a figurine of this real person on their dashboard? Cos Baby Yoda blew Alderaan Academy away at the acapella riff-off when he rolled the Cantina theme into Duel Of The Fates. Kid's a SpaceTikTok celebrity.

It does seem we might not see big content blasts in Squadrons. "Never say never," creative director Ian Frazier told UploadVR earlier this month, "but as far as our philosophy goes we're not trying to treat the game as a live service." He explained that they've "tried to treat it in kind of an old-school approach saying, 'You've paid the $40, this is the game and it's entirely self-contained. We're not planning to add more content, this is the game, and we hope you understand the value proposition.'"

That's both kinda admirable and a bit of a shame. Our Nate's Star Wars: Squadrons review did wish it had more missions and ships, "Because when it comes to a space fighting experience, this is about as good as it gets."

As an old song goes:

Well, I don't care if it freezes over,
Long as I have my Baby Yoda
Riding on the dashboard of my Y
I could go twelve parsecs an hour
Long as I got the cutey power
Glued up there with my pair of fuzzy dice