There is now a too big monster in Barotrauma. It lurches at you from the depths, headbutting your submarine with its colossal and rotten flesh. This flesh then disintegrates, unleashing a horde of what I'm inclined to believe are human-sized parasitic worms. The scariest part is that your best friend might be egging the worms on.

Barotrauma is a multiplayer game about piloting a submarine around Europa, except one of your party might be trying to get everyone killed. Last night's update added that wormy leviathan, a big new submarine, and six new traitor missions. It also lets you get up to more electrical DIY. I doubt the DIY will be enough to save you from all the new horrors I haven't mentioned, but it might well help you drown your pal Dan in the locker room.

The Beasts Within is a big update, with plenty else beside the new submarine and monsters. The server browser's been improved, but more importantly you can now join your friends directly via Steam. Electrical wiring is now less buggy, and people who have the first idea about how to program using logic signs like "sin, cos, tan, asin, acos, atan, modulo, round, ceil, floor and factorial" will be pleased to hear those are a thing now. AI bots have become better at their jobs, too.

Here's the trailer, and further evidence that all marketing should incorporate the Hall Of The Mountain King.

And here are the patch notes in full.

I've only dipped into a few rounds of Barotrauma, in an earlier, clunkier build back when there was way less to do. It was still a blast, mind, because traitors in any context are delightful - especially when you play with a group where genuine skulduggery is hard to distinguish from your friends just goofing about. I'll leave a fuller explanation to prime-goofer Nate, and let Brendy (RPS in peace) explain how this becomes "a spectator sport for ghosts".

Developers Fake Fish and Undertow Games have also popped out a roadmap, though it's less a map and more just a list of things they want to add. It's still in early access, and it seems most of what's left is exploring outside your lovely, probably leaking, traitor-filled submarine. They haven't said when they're planning on leaving early access. 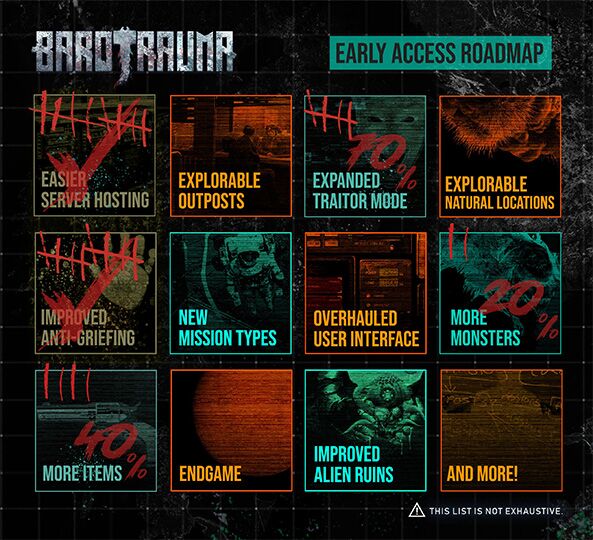