The submarine is filling with seawater and nobody left alive is doing anything about it. The captain is calmly discussing the battery life of his headset radio with the ship’s doctor, who is standing still on the upper decks fiddling with his inventory. Two decks below them a ravenous trio of giant, shrimp-like sea creatures are burrowing from crew quarters to medical bay, flooding the ship room by room, and twitching around its innards like furious parasites. I can see all this, but my crewmates have no idea their shrimpy death is clawing towards them. As the submarine’s engineer, I should probably warn them. But I can’t. Because I’m dead.

You might remember 2D sub sim Barotrauma from Nate’s sub-aquatic clowning around. It’s a multiplayer panic 'em up set in a sunken world, where you and the rest of the crew must pilot a submarine from one end of a cavernous ocean to the other. Along the way you have missions. You might have to find artifacts hidden in a flooded alien ruin, or destroy a large sea creature, or simply deliver your cargo without becoming a flooded metal sausage. You will get wet, and you will probably be killed. 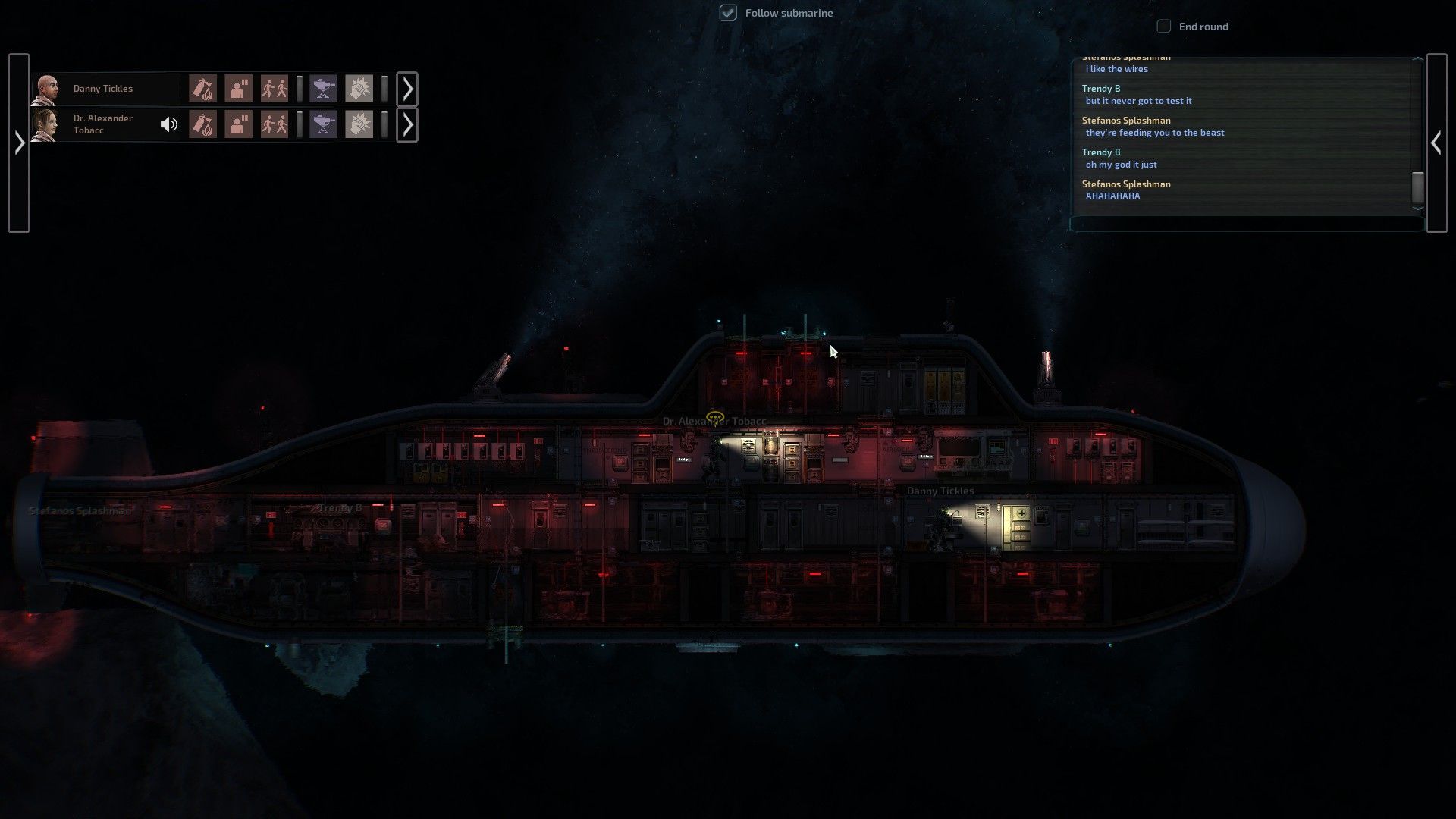 But at least you aren't doing your underwater helldive alone. I played a game recently where my friend (and sweet captain) Dan, suggested we use only the voice comms of the game. No Discord, no Skype. Just in-game chatter through the little headsets all our characters were wearing. When I describe the captain worrying about his headset battery, this is not a mundane concern. If your battery runs out, you have no way to speak to your fellow crew members remotely until you get a new battery from an equipment cupboard, or refill your electricless brick at the nearest recharge station. Couple this with your vision being more or less limited to the room you’re in, and you’ve got a claustrophobia simulator where something always feels like its going wrong. You just don’t know where.

Unless you’re dead. When you perish (drowned, exploded, devoured by an undiscovered species) your voice will cut-out permanently. You’ll be relegated to a ghostly chat channel, where you can only type to fellow deadmates. On the flip side, you now get to zoom out and see everything on the ship. Everything. The usual shroud that limits your vision to your character’s line-of-sight is peeled away. You can scroll out and see the extra-terrestrial crustaceans nibbling at the airlock. You can listen in to the security officer’s sorry muttering as he tries to fix a leak that just won’t go away. If there is more than one of you in this phantom realm, you’ll probably spend the rest of the game typing things to each other. Things like “oh no” or “they don’t know the mudraptor has burrowed into the ballast pump”. 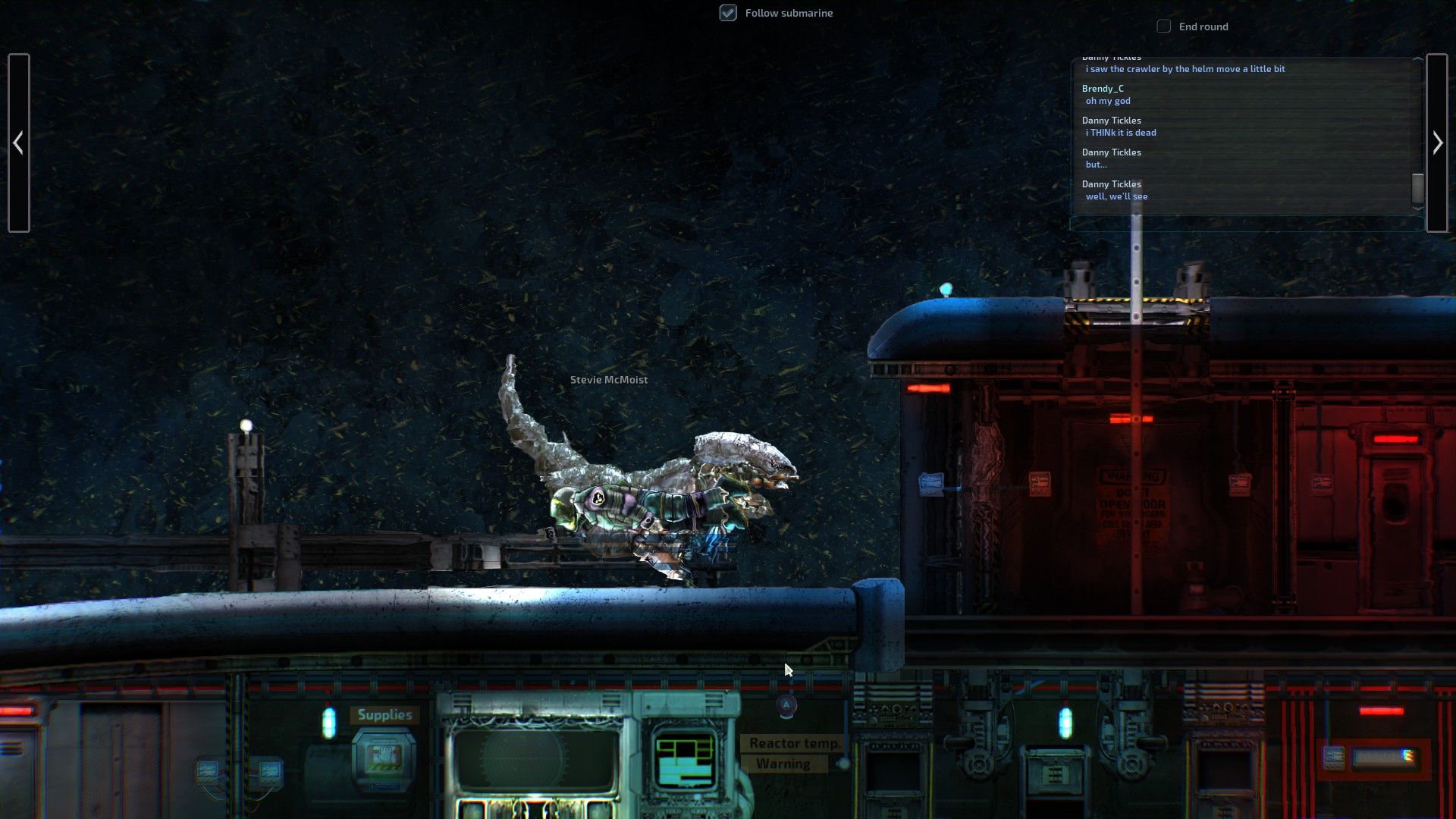 It turns your team’s slow tragic demise into a spectator sport for ghosts. Once, our entire crew was dead except for one man. Brave doctor Steve. He ran from one end of the ship, fixing broken power sockets, to the other end of the ship, where he tried in vain to pilot the vessel towards its final goal – a docking station where he would be safe. We dead ones had suffocated in a flooding accident, but watching the ship’s lone survivor swear with frustration as the last fuel rod fizzled out in the ship’s reactor, just metres from the docking bay, made us type heinous banshee laughter into the ghostchat. The lights went out, the submarine sank back into the depths, and soon enough there was another spectre among us.

You can get Barotrauma on Steam, where it's still in early access. And if you do: stay alert. There's always something going wrong, even if only the dead can see it.