This article contains some spoilers for the Battlefield V campaign story Tirailleur.

It’s a shame that the opening of Battlefield V is a bit of a po-faced mess, because it provides a wildly inaccurate idea of what you can expect from its singleplayer portion. The Battlefield V vignette campaigns are, together, one of the best FPS campaigns in years. One of its tales, about colonised soldiers sailing thousands of miles to fight for a land they’ve never known, proves it.

In its opening, Battlefield V attempts to invest the warmly received Battlefield 1 opening, all short snippets of action capped by deaths, with a Hollywood gravitas befitting the return of the series to World War 2. What it fails to understand is that the entire point of Battlefield 1’s opening was the lack of dignity in the basic mud and blood of conflict. People die brutal, futile deaths, sometimes achieving nothing in the process. In contrast, the louder weariness Battlefield V adds -- patriotic, self-justifying, and filled with words -- comes off as forced.

Once you get past this tonal dissonance, though, you’ll find stories that aren't just fun, but honestly stunning in their variety and nuance. There's a unified approach to story design - where it's experienced, rather than just told to you in oblique, heroic sentences - that is clearest in its pattern-breaker campaign: Tirailleur. 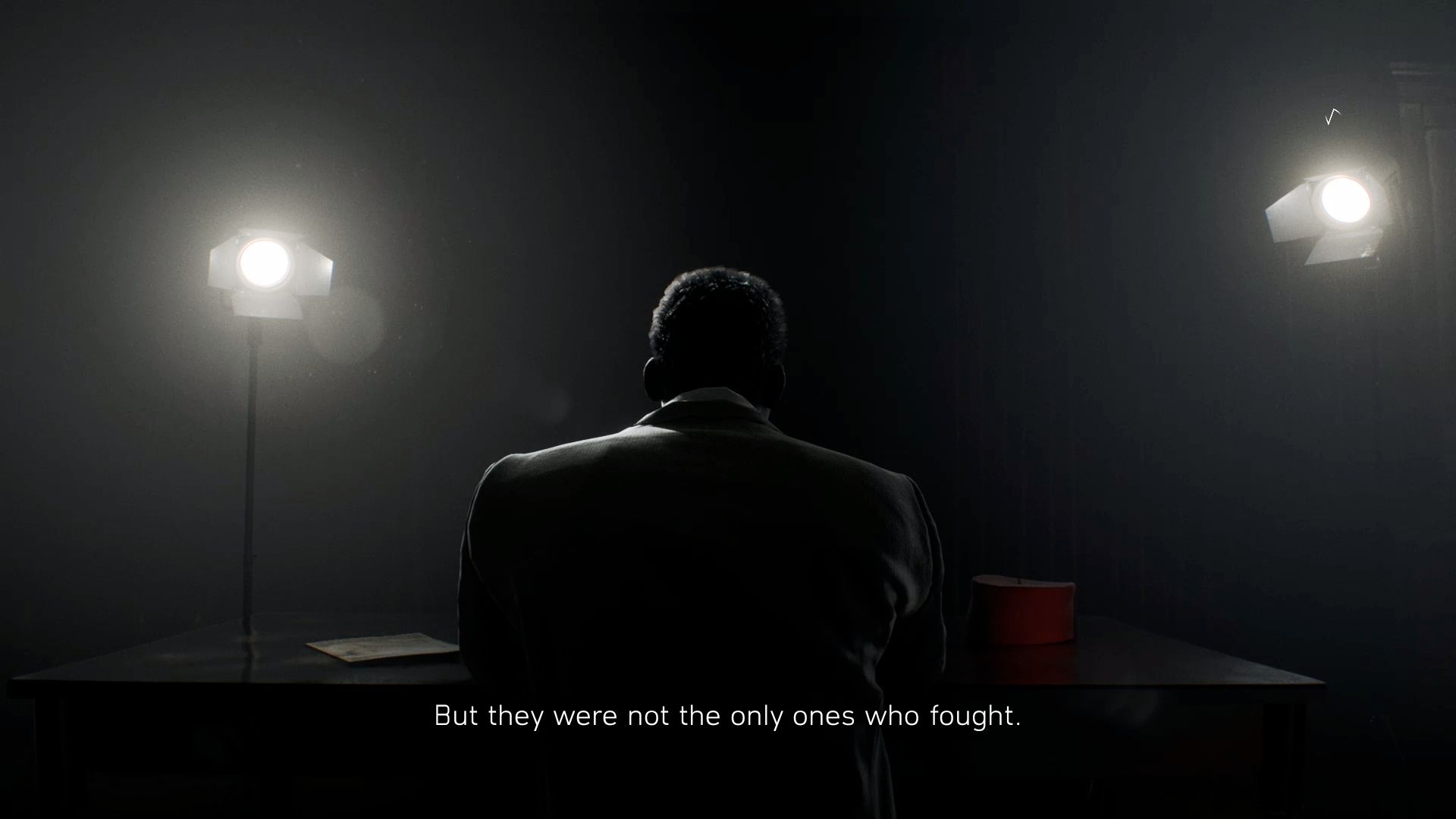 Tirailleur is the only campaign told in hindsight. Deme, your avatar, speaks about his forgotten experiences in the war as a member of Tirailleur forces: soldiers from regions of Africa colonised by France, transported to liberate a ‘home’ they had never seen.

One of the greatest indications of Battlefield V’s dedication to this tricky topic can be spotted early on, in the lighting of its heroes. Conversations around how to light people of colour in film and beyond has intensified in recent years. We look different under fluorescent bulbs, at sunsets and sunrises, in deep water. This richness is often lost in lighting setups and cameras calibrated for lighter tones (one of the reasons why this beauty has not been particularly prominent in film to date). As the campaign for Tirailleur goes on, a trained eye can see the efforts the Battlefield team went to, giving striking depth to the appearances of the protagonists: 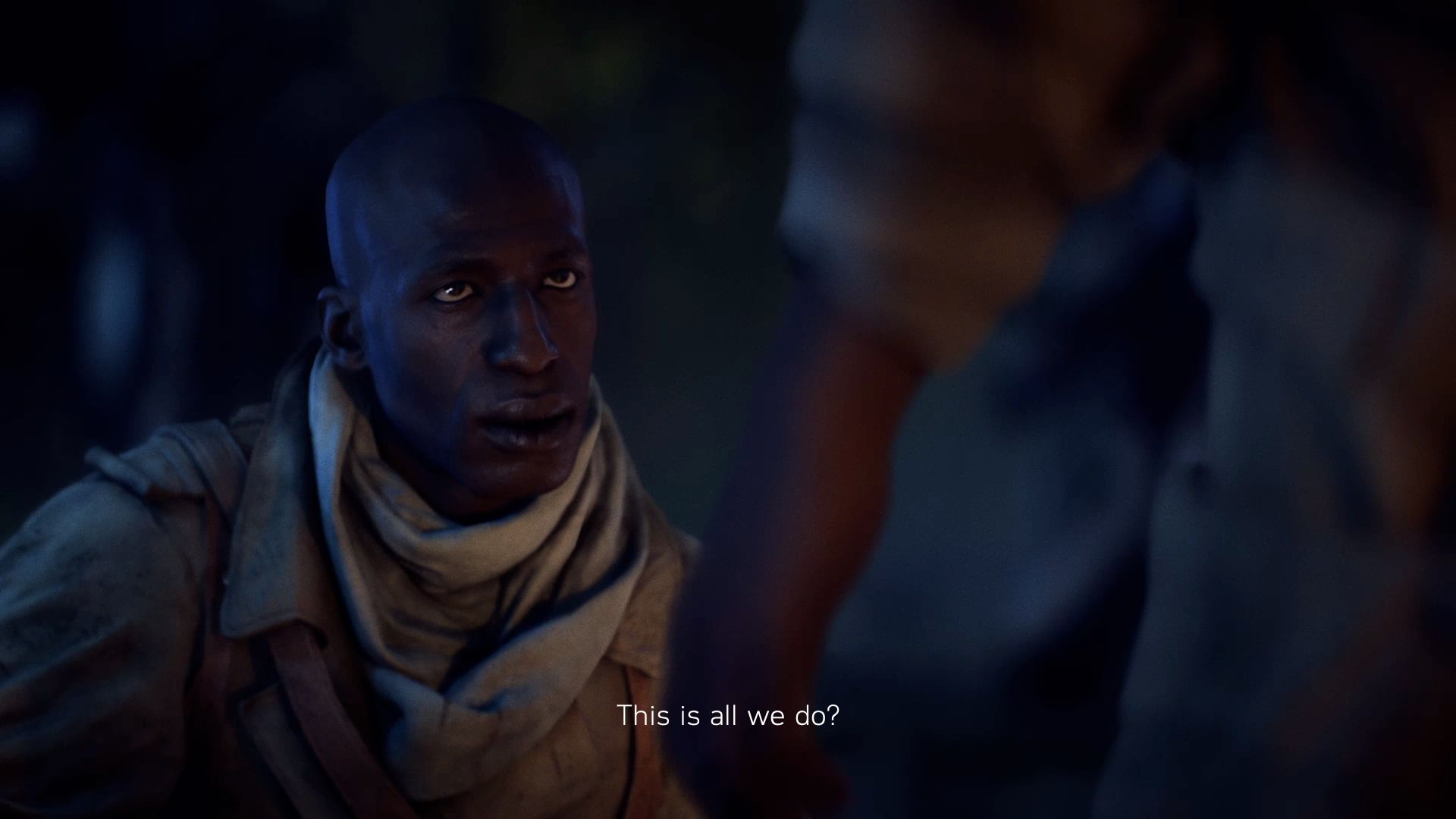 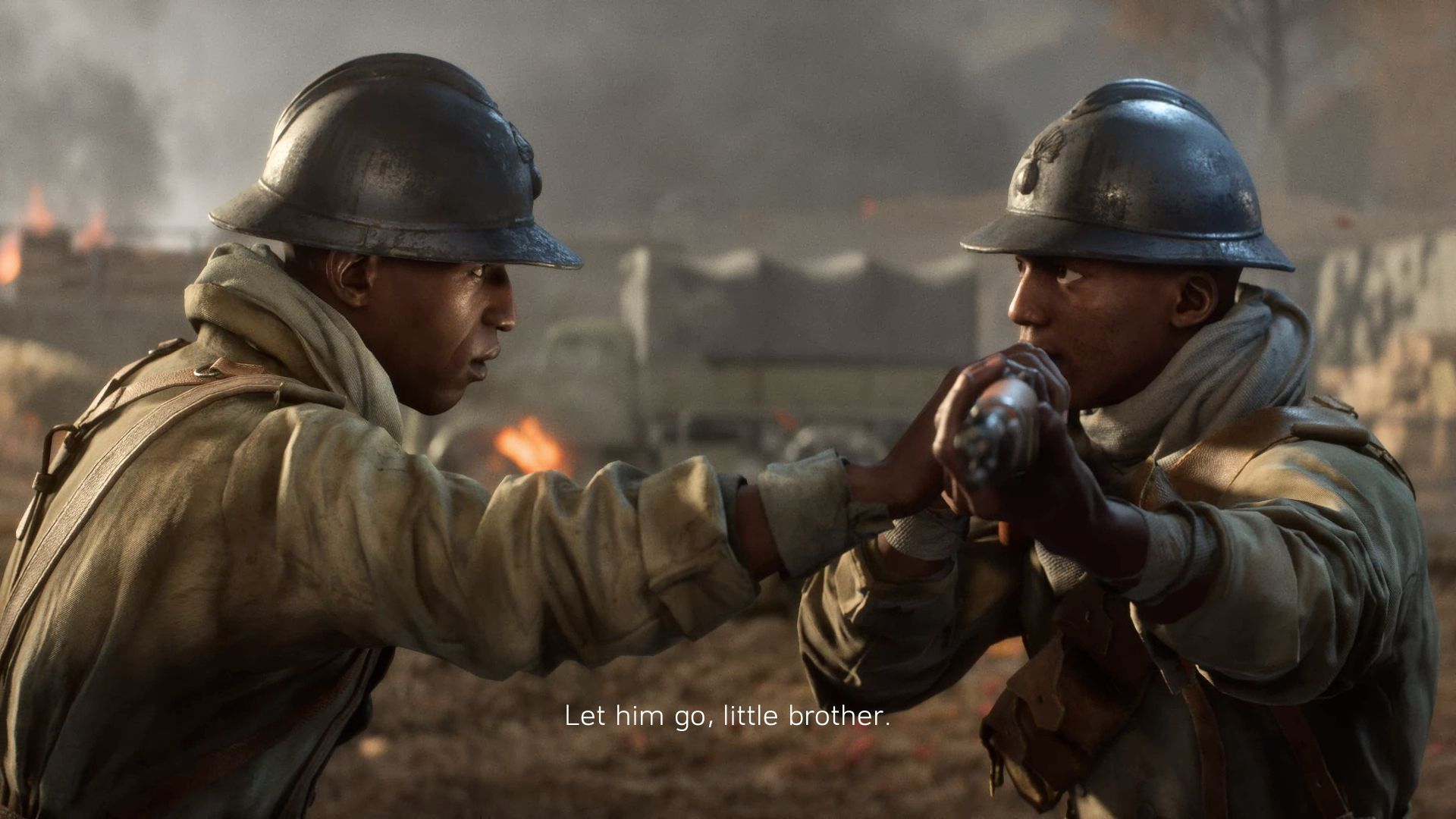 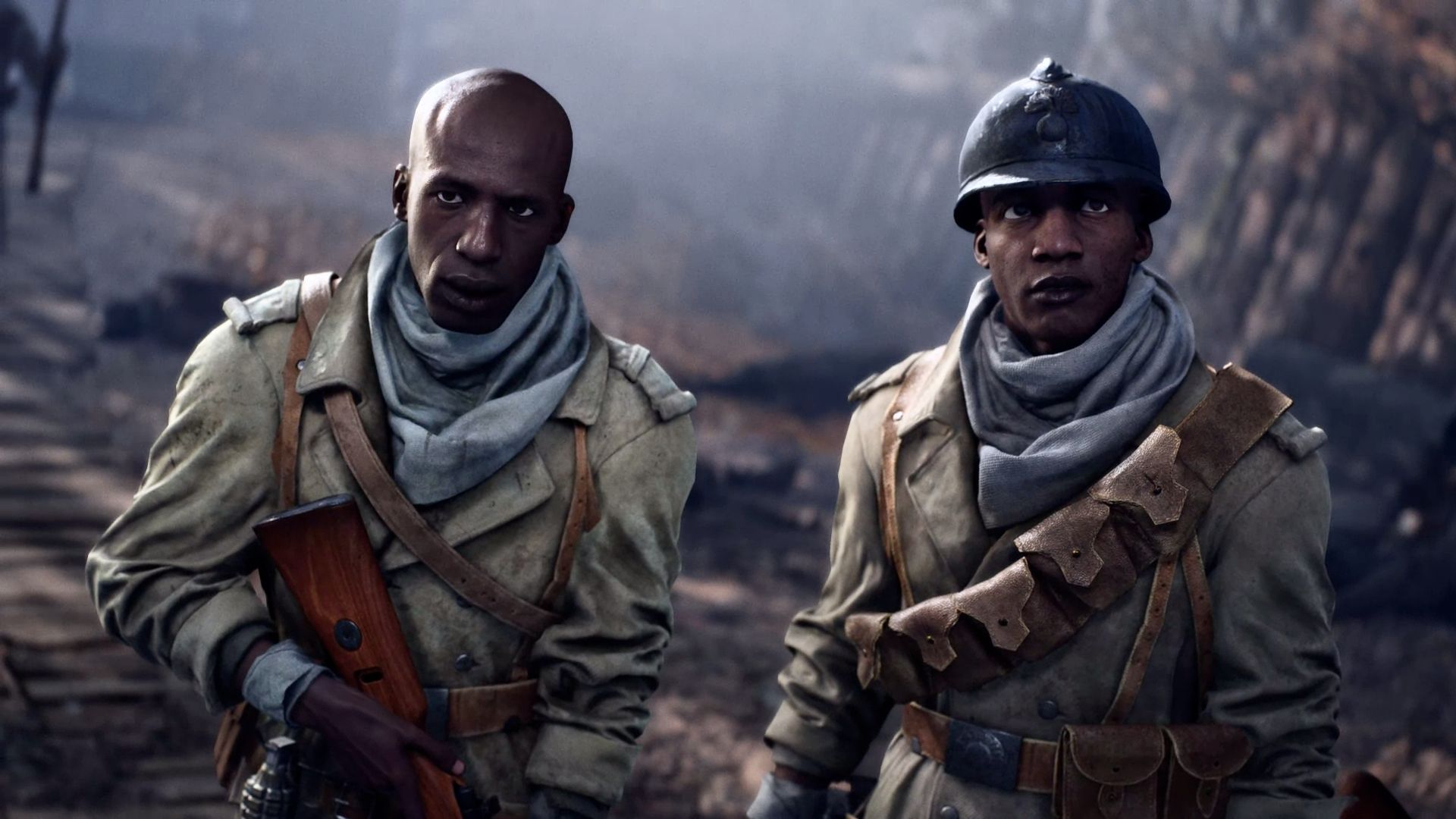 Shortly after Deme steps off of the boat to France and reunites with brother Idrissa, his gun is quietly wrenched out of his hand by a white soldier and replaced with a shovel. They’re set to dig trenches while their white brethren pursue glory on the front lines.

The form of racism depicted in Tirailleur isn’t one of overcoming obstacles in spite of overt prejudice, in the typical Hollywood mould of beatings and screamed slurs. It’s a far more realistic, insidious, and common one. One of neat little boxes of inferiority, and getting shoved into them. This sense of being seen as constantly, consistently inferior is internalised, and actually drives the heroes of this campaign to ever greater efforts in their pursuit of proper recognition. 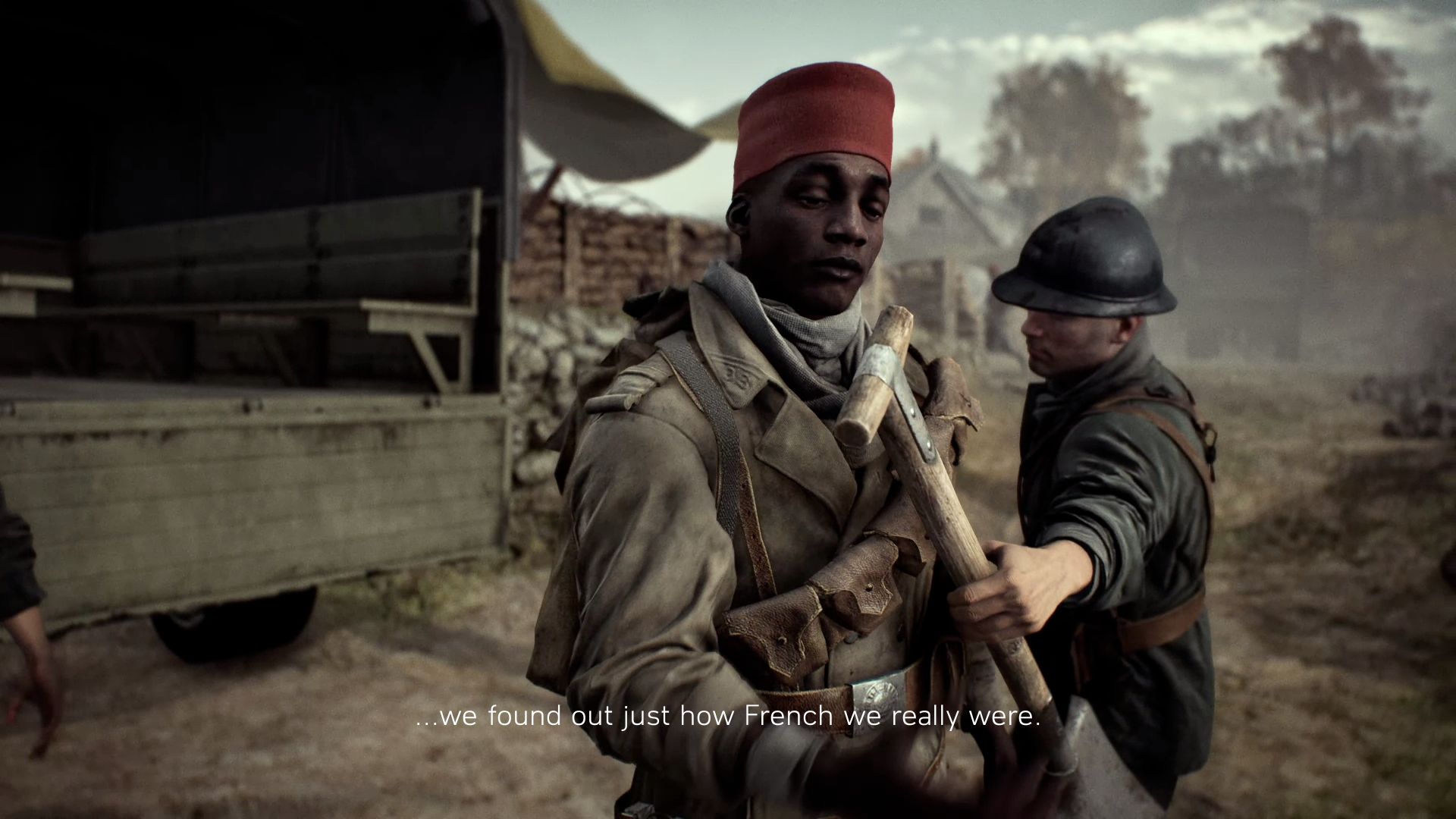 Your squad is finally given an opportunity to prove themselves, when your French Captain volunteers you for a suicide mission against a deeply entrenched anti-air encampment -- one that has slaughtered all the preceding forces thrown against it. Unlike the previous campaigns, after the introductory cutscenes, you’re immediately thrown into battle. There is no opportunity for recon, or choice. Your guns are slow and inaccurate. You are going to die unless you adapt, and adapt fast.

Deme’s heartfelt voiceover describes the feeling of disempowerment that’s lacking elsewhere in the game. You run out of bullets and resources quickly, forced to scavenge new weapons and equipment constantly. As worn as these pieces are, sometimes taken from the hands of your dead enemies, they’re better than the equipment you were sent with.

In this way, Tirailleur somewhat resembles the classic first level of the Russian campaign in the original Call of Duty. In both instances, your government has sent you into battle without the resources you need to fight effectively. In Call of Duty’s case, the Russian army suffered from a severe lack of supplies, so you grimly have to wait for someone with a gun to die in front of you. In Tirailleur, your French superiors simply don’t care in the first place. But you fight, and you win, anyway. 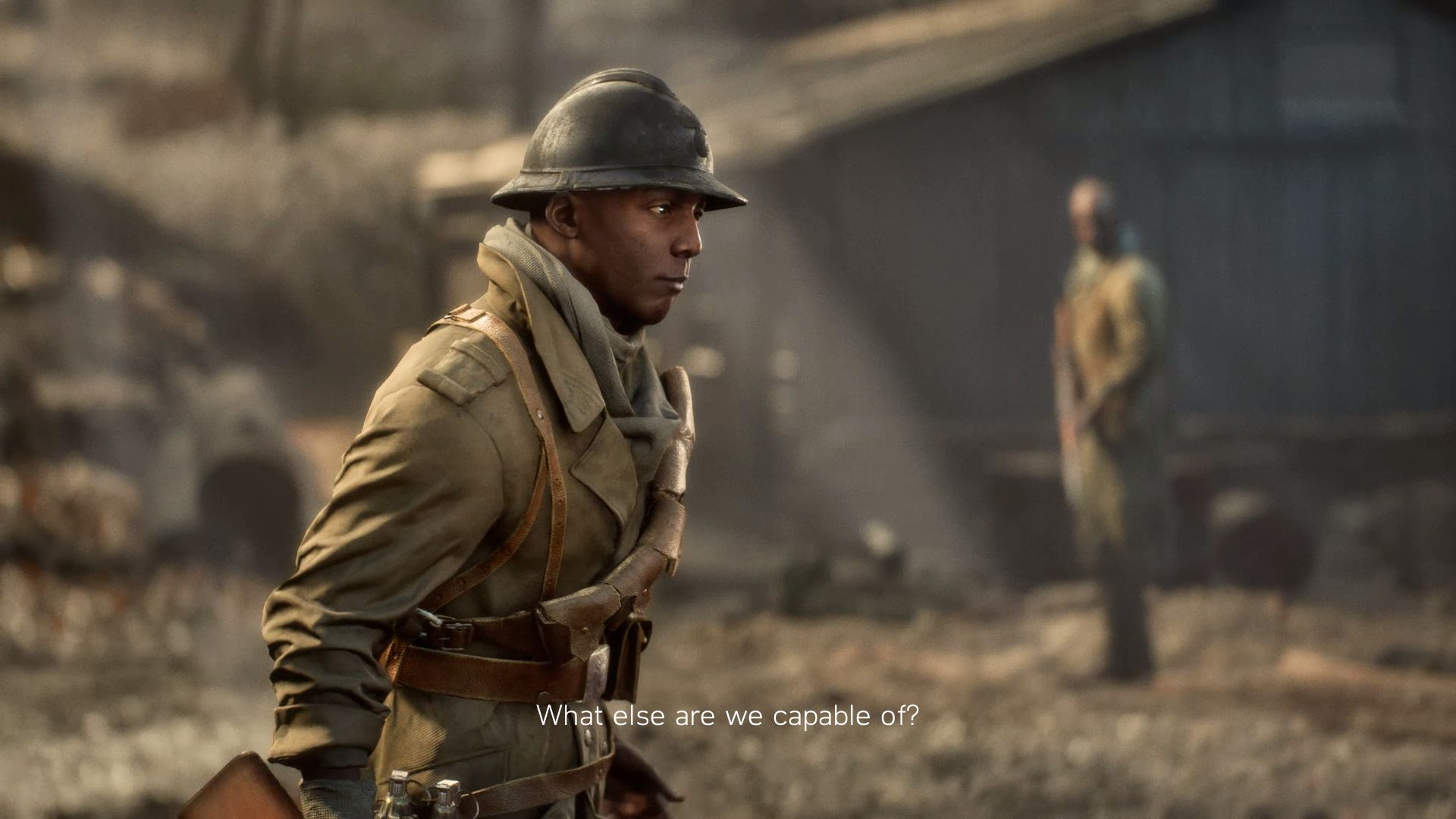 Against all odds, you take the anti-air encampment, and Deme urges his comrades to continue their fight. For a name. Recognition. Respect. To fight the stereotype that’s kept you wielding shovels while your fellow soldiers used guns. It’s a driving beat, and it takes your characters to another seemingly impossible assault, but not without some sacrifice. When you are separated from your main forces, the German army retaliates against you in the autumn woods. You hear the Nazis make irritated decisions to murder captured Tirailleurs rather than take them as prisoners of war. They aren’t valuable enough to keep. You hold your breath as the gunshots echo through the ravine.

Growing up, my family, as well as other black families that I knew, had a joke. They said to never get kidnapped -- anywhere. Not in a hostage situation, not in war, and not off the street, because black people don’t get ransomed. Black people get killed. I promise it’s funnier when my dad tells it.

When I was younger, I laughed at the joke because I was confused. When I got a bit older, I laughed because I knew what they were talking about. And when I became a man, and had seen some thing and experienced some things, I laughed harder than ever, because I understood -- and the only alternative was fear. 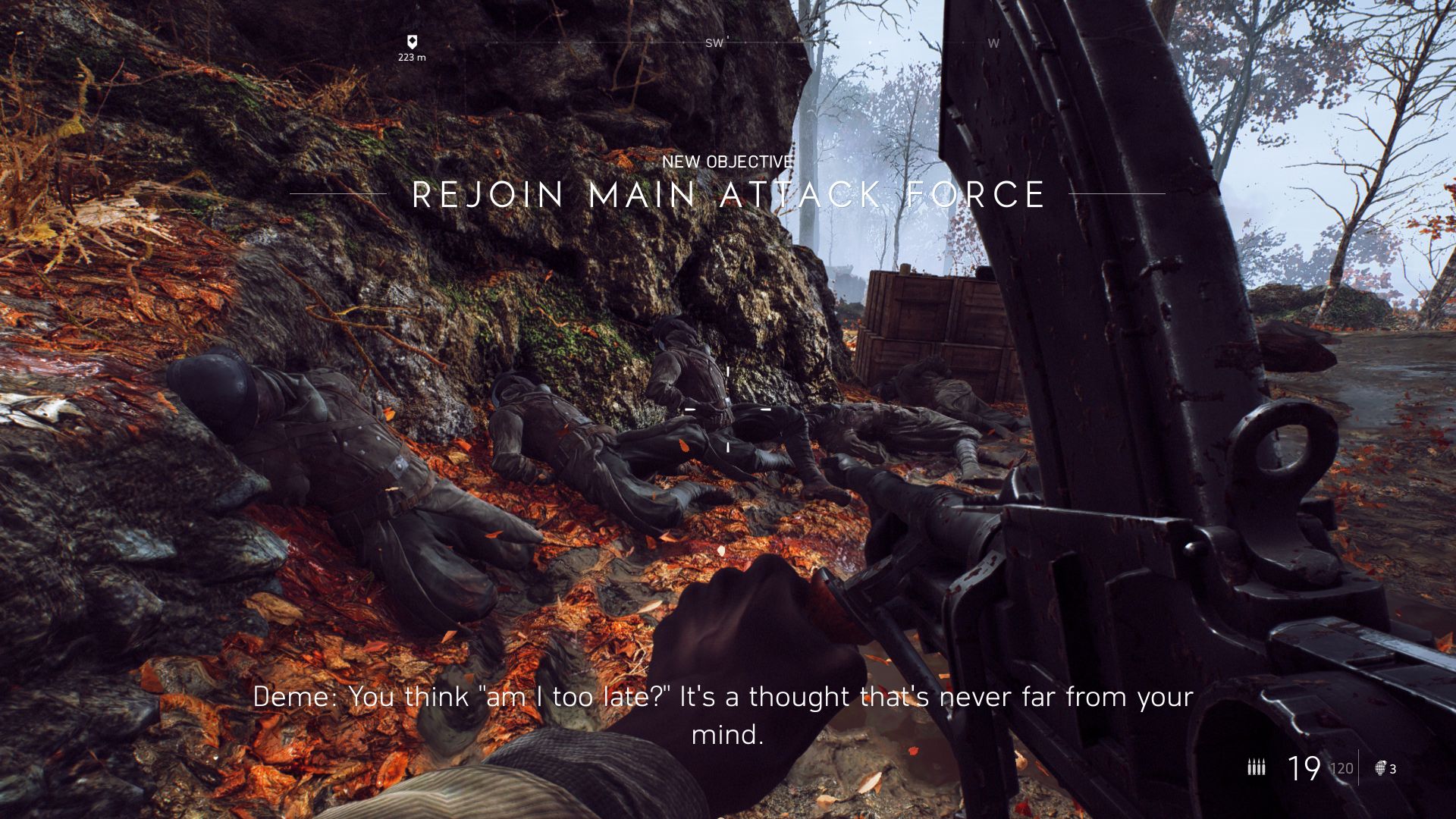 The campaign ends with the Tirailleur gaining the freedom they once lacked, all through the design of the level and scenario. You command the Tirailleur with a flare gun, your decision on when to call in your allies determining how many of them might die, or live to take the chateau at your side. You have time to evaluate the situation, and take the points presented on your own terms. Together, you finally capture the occupied chateau acting as the German HQ in the area. Your brother dies in the assault, saving your life.

The captain who volunteered you for the initial strike takes your squad aside for a celebratory photo. The camera snaps, and you see the stoic heroism of the faces looking back at you -- many of whom weren’t involved in the conquest. Nevertheless, you are united. Finally equal. French. You earned your name, and your gun. 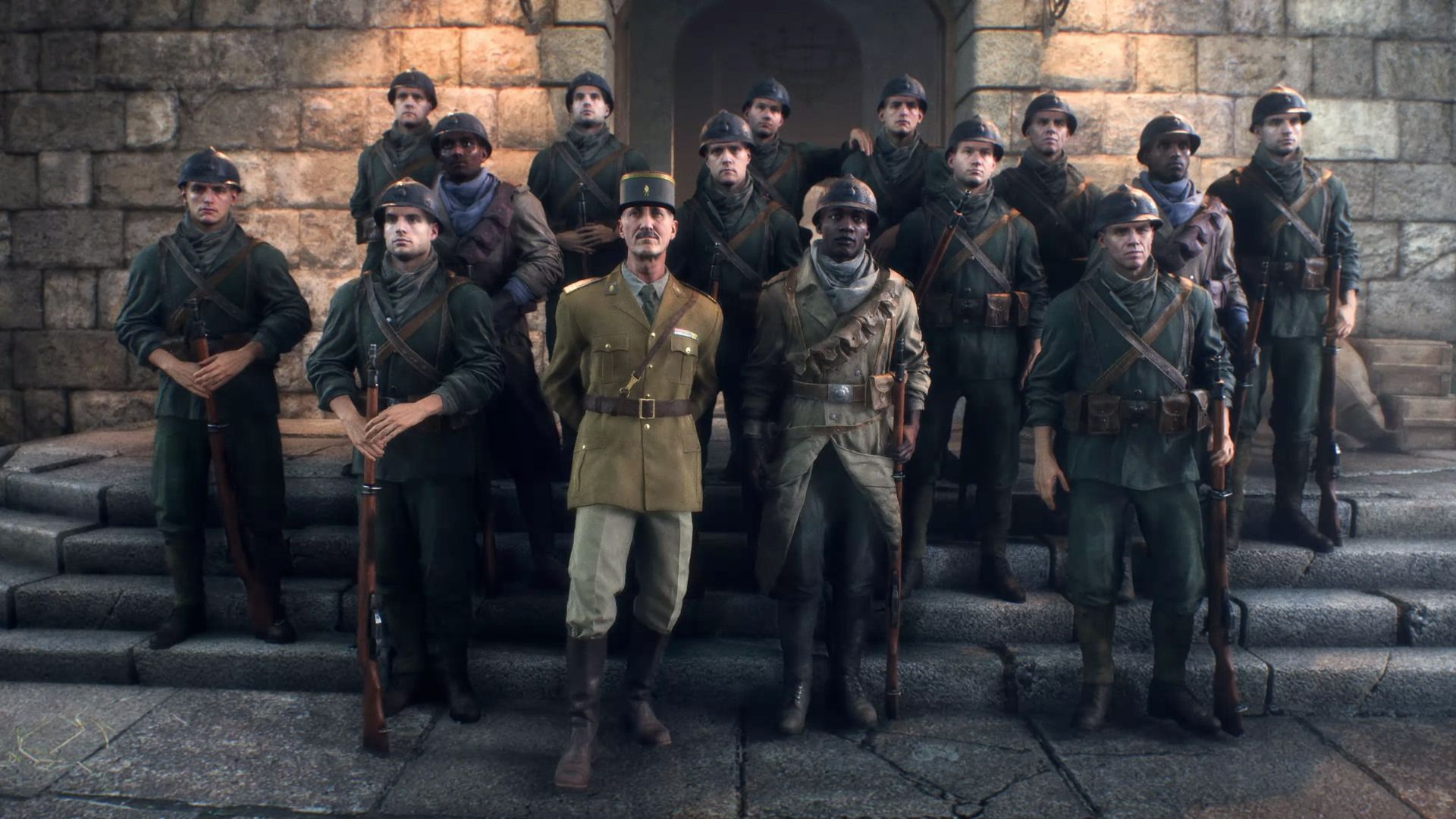 The photo turns black and white. We’ve shifted from the reality of the day, to the narrative of history… and suddenly, the photo begins to change. Deme and the fighters who worked so hard and sacrificed so much to gain recognition, of their worth both as human beings and as soldiers, are erased from the frame. Not a single one remains when all is done. 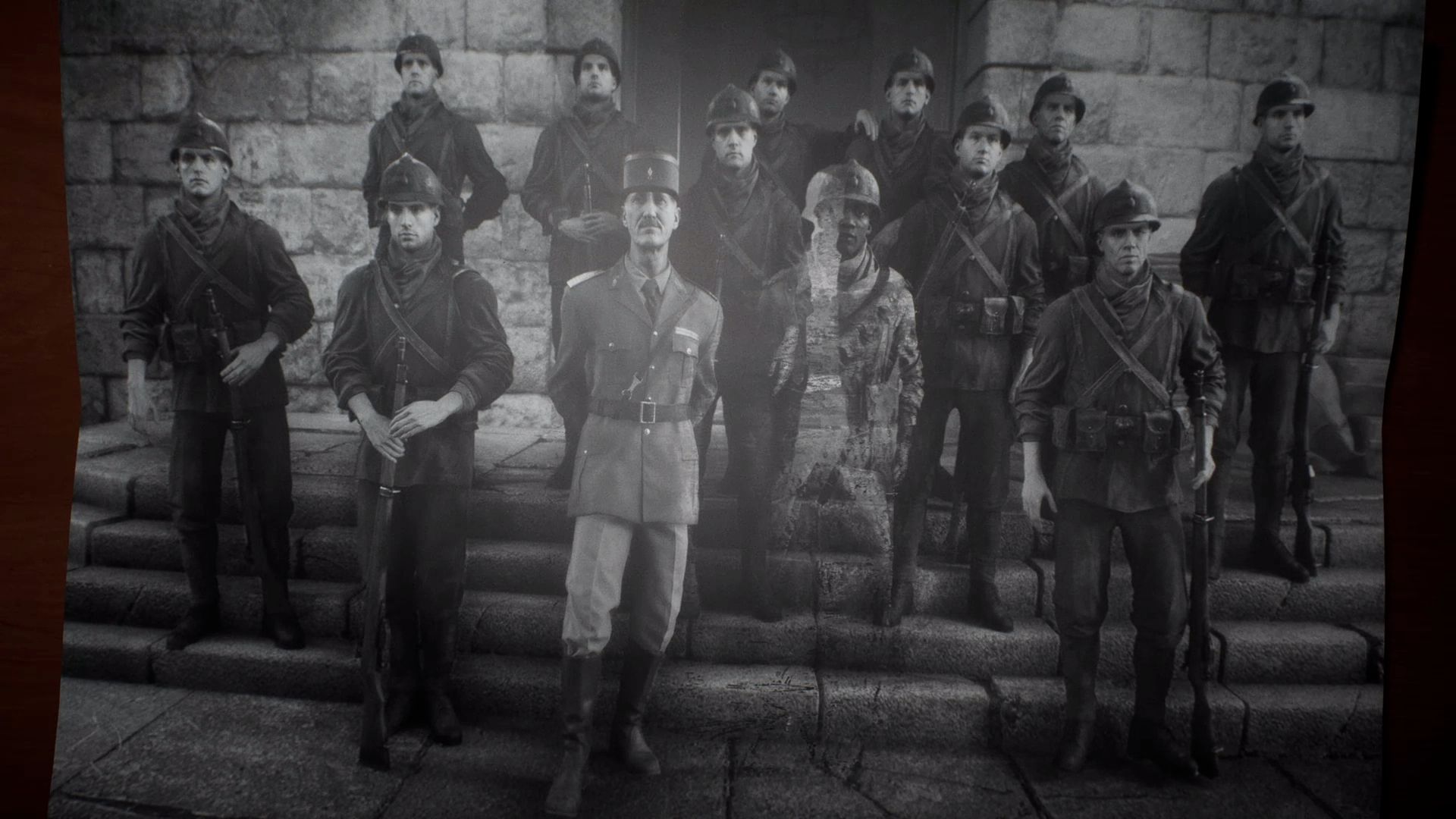 Players upset by diverse representation in Battlefield’s campaigns may blame a political movement, but DICE pre-empted cries of ‘identity politics’ by showing that the political movement already occurred. It’s not that these events didn’t happen: women fought in World War 2, and colonial soldiers arrived to liberate a so-called homeland they had never seen. As illustrated by the closing text, the Tirailleurs received far too little official recognition and compensation, far too late. The Tirailleurs lost French citizenship in 1960 when the colonies gained independence; the last 28 survivors were only granted it in full in 2017. Over 200,000 fought at the time, with numerous records and images to prove their existence.

Someone, somewhere, just decided those stories weren’t worth telling.

Deme looks over the erased photo and recounts how, when the French forces reached Paris, all of the black soldiers were pulled back in favour of “familiar faces.” His final statement sums up my feelings on the execution of this tricky material -- as well as the rest of Battlefield V’s launch-day campaigns. 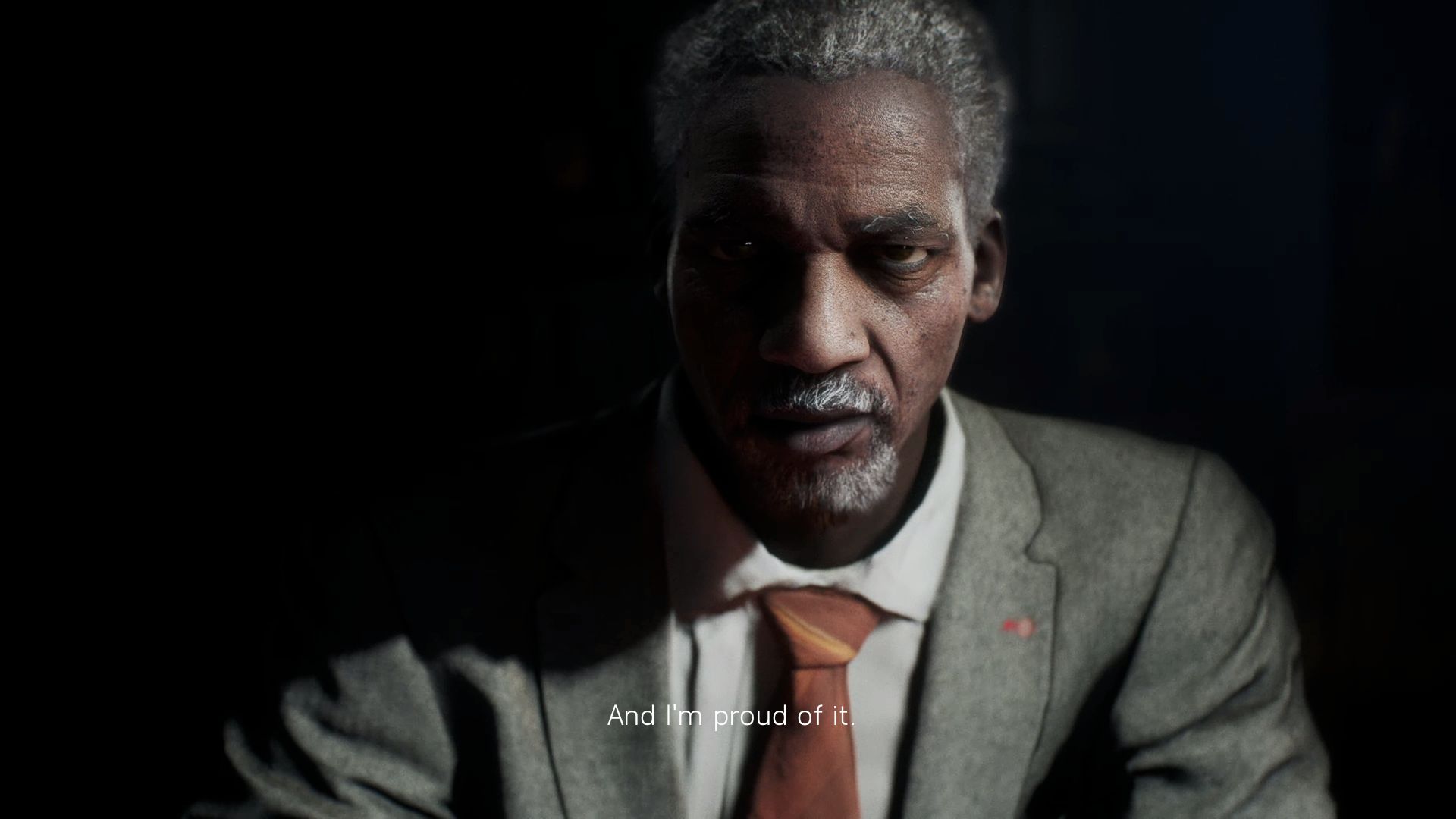