This is Playstyle Royale, where I head into Playerunknown’s Battlegrounds and try to win my chicken dinner while adhering to arbitrary rules. This week’s rule comes from Balnakor, who suggested this in the comments from last time:

“Conflict avoidance: loot up how you like, but you can’t use any weapon apart from smoke/stun grenades until you are in the last two.”

For added tension, I’m only giving myself five attempts. It’s going to be a tough one.

It’s a tricky decision, but I figure I’ll be slightly better off playing in third person this week. While it’s true that people will have an easier time spotting me, I’ll also have an easier time avoiding them. I’ll be able to check around corners (hopefully) undetected, and generally have a better sense of what’s around me.

The opening stages of my first game pass peacefully, my looting undisturbed as I wind my way down the coast. After around 15 minutes, I head to some nearby cliffs and tuck myself into the rocks. After last week’s antics, I know that if someone comes along I’ve got an escape route.

Someone drives a boat into a little cove beneath me and stops to apply a first aid kit. I have an easy shot lined up with an M14 I found earlier, but I curse Balnakor in my head and hold my fire. The boat drives away, but then I hear someone shuffling around immediately above me. I prepare to make a heroic dive off the cliff face but no human ends up bothering me. The enclosing blue wall of death does bother me, however. 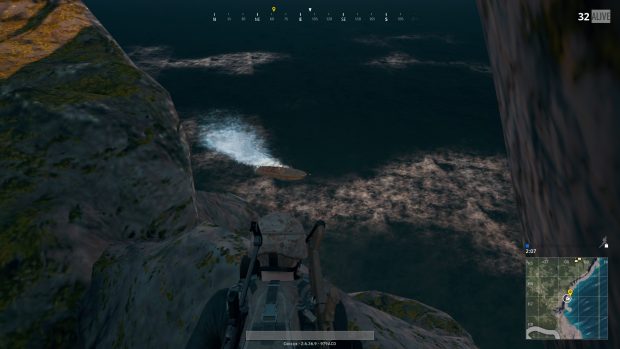 The next circle has ended up around Lipovka - this match is heading toward what my friend Pete is fond of calling an ‘urban finish’. I can see someone running up the beach, trying and failing to weave his way through a hail of bullets. I decide my best chance is to swim, seeing as I don’t have to worry about being too slow as I’m relatively close to the circle. I hop off the cliff. I can duck below the surface if I need to, and hopefully anyone who tries to take me out will soon be too wrapped up in dealing with their own attackers to keep their focus on me.

I see two trucks roll up to the town at once, where they get fired on by multiple shooters who are inside buildings. I run further up the beach, ready to dive back into the water if I need to. Once I’ve put some distance between me and the firefight, I cross the street and head into the relative safety of a building.

A few minutes later, which I spend sitting around doing nothing, there are only six people left and the circle is wrapped around some buildings in the far south of the town. Rather than hitting the streets and heading through the centre of town, I nip back to the coast. Someone has had the same idea, but he’s a ways ahead and seems to be focusing on someone else. 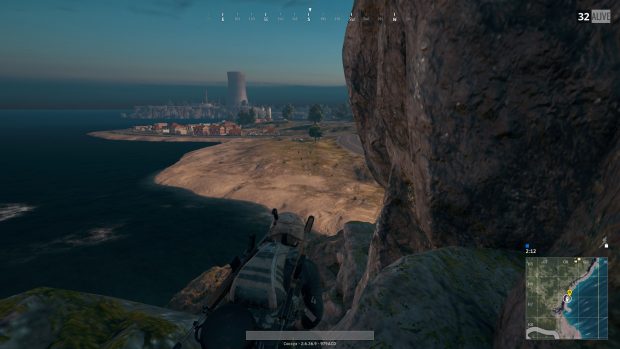 I keep creeping forward until he turns around and spots me. With the blue zone at my back, I’m forced to run around and enter the next building via the main road. At least one person shoots at me as I scramble through the door, but miraculously I don’t get hit.

There are four people remaining.

The circle shrinks again, and I have to abandon the house I was holed up in. There’s someone just a few metres ahead of me, but fortunately he’s firing at someone around a corner I can’t see. I slip into the house, practically within melee range of the shooter. I only get a few seconds to myself before someone follows me in with a shotgun.

He charges into the room I’m hiding in, but I somehow get past him. He spots my escape, and follows me through to the next room. I’ve got time to drop a flashbang, but succeed only in blinding myself before I’m gunned down. If just one other person had died, I’d have been able to defend myself (the rules say I can use any weapon if there's only one other person left standing, remember). Still, I've already made it to the top three on my first go - maybe this week's royale isn't as doomed as I thought!

I parachute down into my next game, grab a bike and instantly kill myself by crashing into a hay bale. 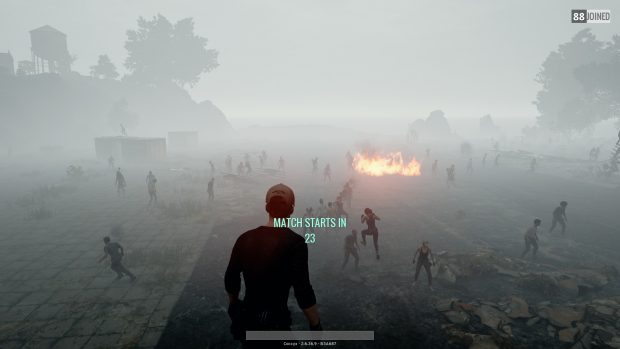 I’m not too upset though, because when my third game loads up I’m treated to a wonderful sight - or lack thereof. It’s foggy! This is what I’ve been hoping for. The most recent addition to Plunkbat's weather conditions, fog dramatically reduces everyone's vision down to a few dozen metres. It’s definitely advantageous for this week’s more passive playstyle.

I don’t spot a single person until I’m in the last 20 players alive. I can hear shots coming from the more central area I’d ideally like to head to, so I wait in a bush at the very edge of the circle instead of forging ahead. Someone appears, and heads straight towards me - I think they've had the same idea. I brace myself for the end.

Somehow, even though this person comes close enough to actually nudge my character slightly, they run straight past me and set up shop in a neighbouring bush. I let out an astonished laugh, and consider turning my mic on and whispering ‘psst, bush friend, want to team up?’. Unfortunately, I can’t remember how to turn voice chat back on. 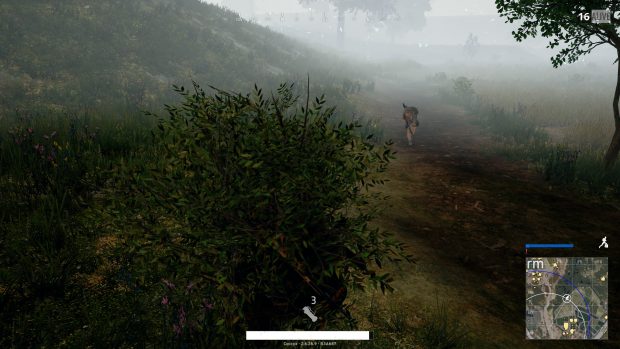 After a minute or two, a slightly more observant fellow comes along and kills me. He still gets within a few metres before noticing me though - I’d have had ample opportunity to shoot him, if that were allowed. The bush strat is still strong.

Loading into my fourth game, I’m pleased to see the fog has persisted through to the next round. It only has a 10% chance of spawning, so I’ve gotten pretty lucky.

The first 20 minutes are again uneventful, apart from when the circle makes a bridge crossing necessary and I have a brief panic when I can’t find my bike. I make it over though, and hole up in a shed until I’m in the last ten players alive. The shrinking circle gives me no choice but to run across an open field, where I get taken out by someone who I could have killed if shooting was an option. I really should be making more liberal use of smoke grenades - I could have used them to block his line of sight.

I’m on my last attempt, and I’m far from confident as I load into a bright, sunny day. I’m looting a set of buildings about ten minutes into the game when I hear a plane flying directly overhead. I look outside for the crate drop, but it’s nowhere to be found. 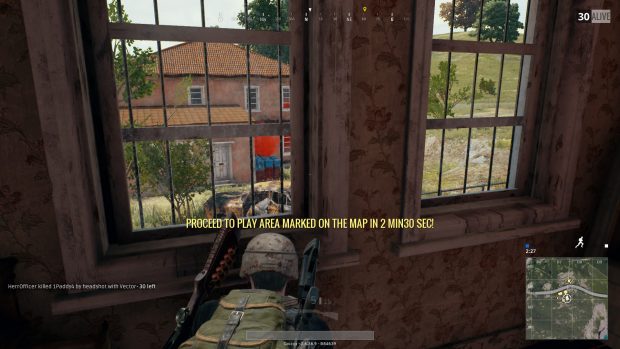 I cross the street and continue looting, but get interrupted by shots coming from just outside the window. Turns out the crate had dropped in between two houses, and people are already fighting over it. The person closest to the crate manages to take out an attacker, then goes back to looting it. I again find myself with a clean shot - the contents of the crate and whatever those two people were carrying around could easily be mine. Instead, I run away.

Another 10 minutes pass as I furtively make my way from bush to bush, gunfire from unseen battles crackling nearby. I make it to a run-down shack, and sit tight as the number of people alive ticks down to five. There’s a sniper right outside my hut - I’m going to have to sneak past him. Fortunately, he’s paying more attention to what he sees through his scope than to his immediate surroundings and doesn't spot me. I put a tree between us, and then start taking fire from downhill. I swap back to the other side of the tree, and hope that the sniper doesn’t notice me while I apply a first aid kit. 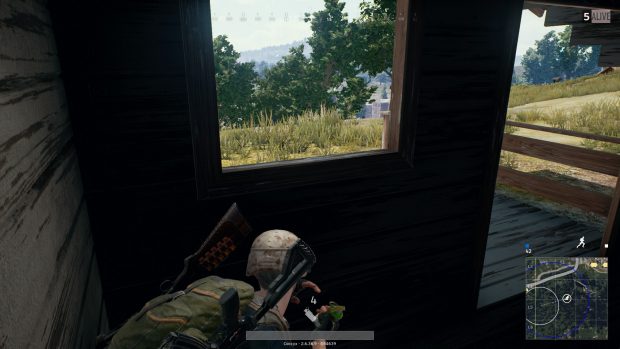 He does. I sprint down the hill, now being shot at from both directions. The bullets subside for a second as I make it to another tree, but soon start up again. No angle is safe: the sniper takes aim at me again, and I duck back around my tree. Fortunately, someone else seems to have taken care of the person who was shooting at me from that side. I nervously swig down my last can of pop, and draw an M14.

I can see exactly where the last remaining guy is, but the blue zone forces us both to abandon our cover at the same time. He opens fire. For the first time, I get to fire back. 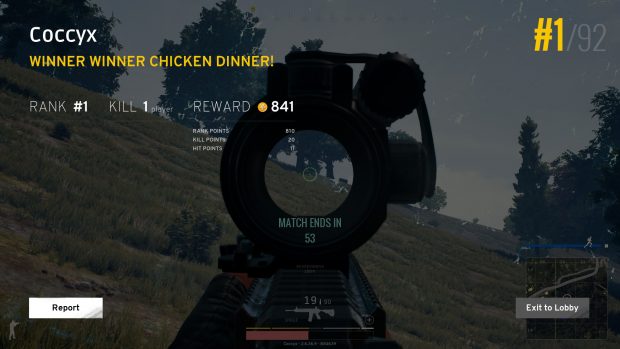 Well, that was unexpected! Turns out I didn't need to rely on clever smoke grenade plays after all, though I've got no idea how I survived that last encounter. If you’ve got any rule suggestions for me to follow next week, pop them in the comments below.

If you're struggling to earn your own chicken dinner, fear not: RPS has you covered. Here's our complete PUBG guide that's packed with tips and tricks to help you get a win. For advice on which guns to use, see our best weapons guide. There's also our map guide, which will tell you where best to loot if you're after a quiet or competitive drop location.