Some might say that BattleTech's meta-game is the strategy layer - all that base-building, mech-fixing'n'fitting, pilot management and parts-shopping required to ultimately create an unstoppable army of heavy metal death. Those people are dead wrong. The overarching goal of BattleTech, the true purpose of its turn-based fights and base management alike, is that you gotta catch 'em all.

By which I mean, you gotta kneecap 'em all.

By which I mean, you gotta learn to take down enemy mechs with maximum but non-totally-destructive efficiency if you want to take their carcasses home with you and build your own army of steel. I don't play BattleTech matches merely to win any more. I play BattleTech to have my pick of 65-ton trophies.

If you're new to it (i.e. didn't know the boardgame it's based upon), there are distinct psychological stages of playing BattleTech. In fact, let me use popular parlance to do this: 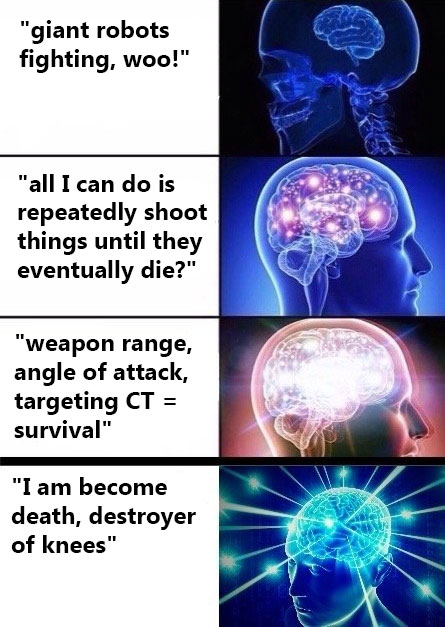 Or: confusion/understanding/mastery. The days when my goal in a mission was to emerge with most of my mechs' limbs still intact feel like a childhood memory by now. The days when I spent my first, dozen+ hours in BattleTech carving grimly and often fruitlessly away at the enemy's armour in the hope one of them might suddenly fall over are like a maudlin dream.

I don't mean to say I'm shit-hot at BattleTech particularly: this is just the natural course of sticking with it for as long as I have (50 hours and counting), and I think familiarity and understanding inevitably overwhelm difficulty past a certain point. If presented with a situation, I now see exactly what the solutions will be, even if a combination of RNG luck and tactical judgement doesn't necessarily mean I'll pull it off every time. If I were to play a new campaign now, I'd want crunchier difficulty though (and it sounds like the first major BattleTech update will offer this.)

Not that I'm in any hurry for that, because I am hooked on the aforementioned meta-game of trying to collect every mech in mech-town. Here's the deal in BattleTech: after each mission, you get to select a few pieces of specific salvage to take home with you. (You get to decide before the mission whether you want more or less salvage in favour of hard cash, but I'll come back to that piece of genius design in a moment). Most of this will be weapons you've already got three-dozen identical versions thereof, some of it will be more rarefied weapons that you can't guarantee you'll find in a shop, and some of it will be Mech salvage.

Mech salvage is exactly that - it's part of a Mech, not an entire Mech. But - and this is my favourite feature in BattleTech - if you collect three identical pieces of Mech salvage, i.e. from the exact same type of Mech, you get yourself a free giant robot suit. Whether you add it to your team, sell it for hundreds of thousands of credits or (hello, yes, me) obsessively-compulsively strive to collect one of each different type of mech is up to you, but in any case, it's the biggest loot-win BattleTech has to offer. Sure, the Skinner box is having its way with me again, but something I really appreciate is that this element of the game only clicks after I've been through the confusion/competency stages. OK, I know what I'm doing now: time to reap my 80-ton rewards. 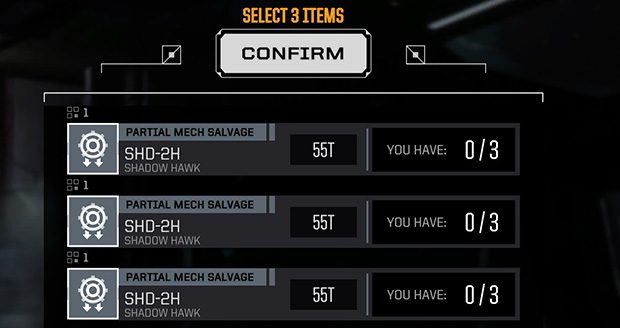 One of BattleTech's many unspoken wrinkles is that, if you outright kill an enemy mech by destroying its central torso (CT), the post-mission screen will only grant you one piece of salvage from that Mech. However, if you can kill it without destroying its trunk - the core onto which various limbs and weapons can be stitched - you'll have a good chance of getting two or even three pieces of matching salvage.

The two/three split is down to whether or not you do the second-most efficient form of kill - taking out both its legs. A Mech without a central torso is worth one salvage, a Mech with a central torso but without any legs is worth two, but - gold star time - a Mech with a central torso and legs is potentially worth three. (I confess, I'm not totally clear on whether a clean kill means a definite three every time, but by and large an intact CT and legs invariably mean more parts). And a Mech that yields three salvage is a free Mech. Glory be.

The trick to that clean kill, and the magic three salvage, comes down to taking out a Mech with the minimum of destruction. This means knocking it over without turning a leg into shrapnel, let alone trashing that precious CT. This means understanding two key things: stability and injuries.

To start with the latter, a Mech can't keep lobbing missiles at you if there's no-one to pilot it. If you can cause enough damage to its driver, their frail, squishy bodies will slump uselessly at the controls, and the whole shebang is yours to keep. However, you can't directly target a pilot: all you can do is try to score damage on the parts of the mech which surround them. This means head, left and right torso-sides and whatever horrific bruising and laceration happens whenever several dozen tons of robot trousers slam unexpectedly into the ground. 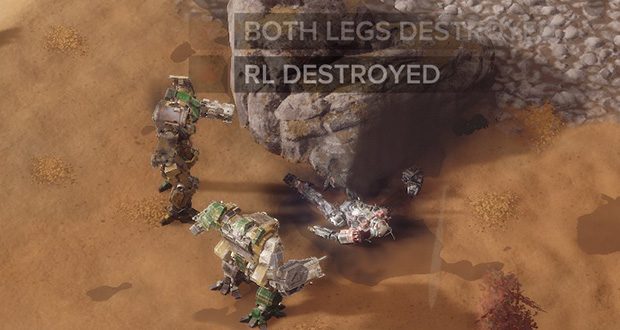 The crux of a BattleTech battle is making your Mechs' lasers, missiles and rounds score damage on particular areas of enemy Mechs, even though, most of the time, you can't specify where that will be. It's a game of odds: if you position your Mech so it's shooting at the left-hand side of an enemy, damage will be distributed between left arm, left leg, left torso and, to a lesser, extent, head and central torso.

If you're playing Giant Robot Amputation Pokemon as I am, the thing you don't want to happen is for too many projectiles to strike that CT or, secondarily, the leg: trashed metal means no free roboguy. So you need to save up Called Shots, the ones that do let you target specific bits of an enemy, to deploy only when you've crunched the numbers and are sure they'll cause an injury. A side torso's yer main man there, with the bonus effect that it'll usually take a weapon, several weapons or an ammo store with it, so a still-standing enemy can give you less jip in its next turn.

Then there's the head. Unusually for a modern videogame, a headshot is not the max-skill coup-de-grace it often is, but rather an exceedingly rare event. In most situations, even a Called Shot with perfect positioning will have a less than 5% chance of landing, and even my pilot with maxed-out Tactics only has a 18% chance of a Called Shot hitting the head. A pure head kill is possible, but super-hard to arrange, particularly in the early and mid game. However, a headshot is an instant injury from damage alone - i.e., unlike every other part of the Mech, you don't have to destroy that component to get an effect. So, in that case, the initial, confused BattleTech tactic of spamming all fire at the front of an enemy reaps dividends - a stray missile's bound to hit the head sooner or later. 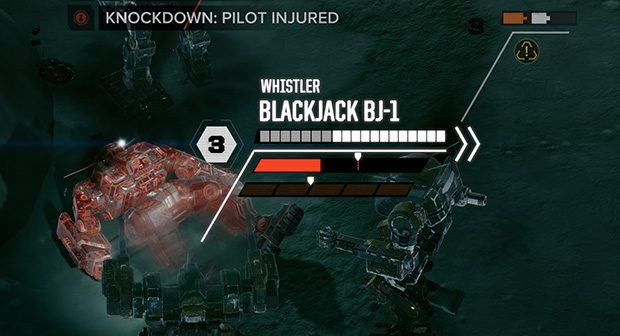 The final form of injury comes from knockdowns. The surest way to make a Mech thump violently into the earth like a chicken-legged asteroid is to destroy a leg entirely. It can stand up and walk slowly again afterwards, but take out the second leg and it's all over. Better, in terms of salvage, than destroying the CT, but it means you'll get two Mech parts max, as opposed to the potential three if you don't trash the legs. (De-legging Mechs without damaging anything else is, however, a smart way of securing a specific weapon as salvage, if you've noticed that an enemy is toting something you fancy). So, what you want to do is knock the Mech over without destroying its beanpoles, and that means missiles.

Stability's a key concept in BattleTech; basically, the sheer size and weight of Mechs means that making them wobble is a big problem for them. Pelt one with enough explosives or heavy metal punches and it's going down, causing a pilot injury each time. To do this, you'll need to be judicious about which weapons you use - both because you don't want to cause too much damage to valuable parts and because the likes of lasers don't affect stability. (The inverse can be true when you're Called Shotting to damage specific parts - precision weapons like lasers are better than a swarm of missiles which will land all over the shop). Thus, Giant Robot Amputation Pokemon becomes more about deactivating many of your weapons, rather than trying to cause maximum carnage.

A pilot dies after between 3 and 5 injuries, depending on how late in the campaign you are, or after total head destruction. Kill the meat, save the metal: these are the watchwords of Giant Robot Amputation Pokemon. Side torsos and arms can (and usually must) be sacrificed, but everything else is precious. I will become the master of a steel army such as the galaxy has never known. I have had to unlearn so much about battle and then begin anew to do it. Now, I revel in this. To me, my giant robot amputee Pokemon!