If you click on a link and make a purchase we may receive a small commission. Read our editorial policy.
Premature Evaluation is the weekly column in which Steve Hogarty explores the wilds of early access. This week he is a Cronenbergian monster in rogue-lite action game Beacon.

David Cronenberg's 1986 horror classic The Fly explored the idea of how much of a fly Jeff Goldblum would have to mutate into before he stopped being extremely hot (the answer, as revealed in the DVD commentary, is as high as 65 percent). It also tapped into a deep seated human fear of being trapped inside an elevator with a fly.

But more than either of those things that I’ve just said, The Fly was really about our fear of unchecked scientific advances, of how disgusting our bodies are, how biology is driven by unseen forces beyond our control, and how our organs can suddenly turn against us, like Communist sleeper cells activating in the American suburbia of our guts.

This Cronenbergian brand of body horror is one of the driving themes of Beacon, a roguelike shooter in which you – or at least some long-dead version of you – have crash landed on a mysterious planet. 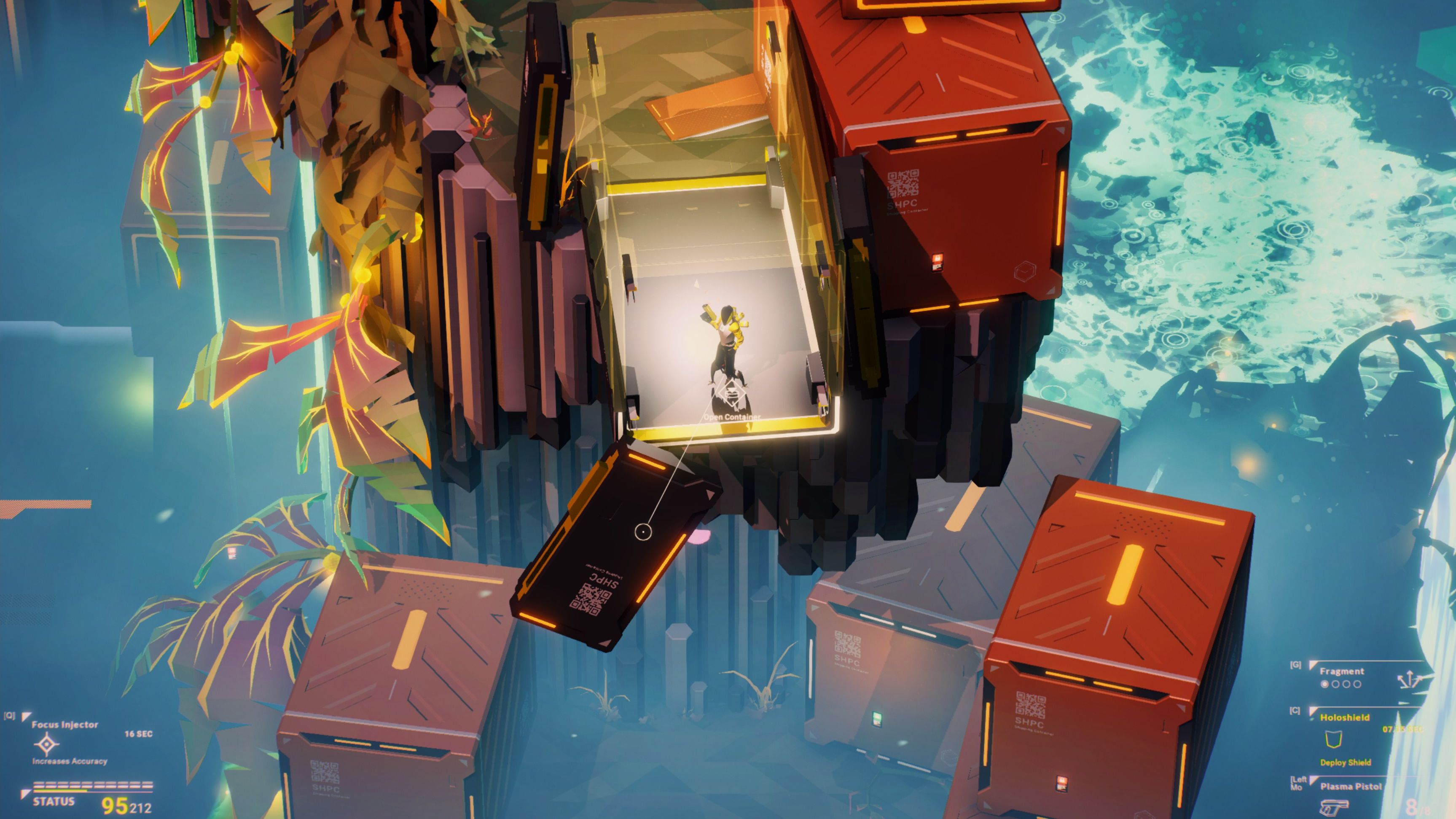 With your original body scrambled into a kind of human Nutribullet smoothie on impact, your ship’s emergency cloning wotsit kicks into gear, spitting out a fresh version of you. Each time you die, you pop out again to press further into the weird alien world into which you have so spectacularly slammed, a little bit wiser and a little bit more capable than last time. That’s what a roguelike is. You probably know that.

Here’s the twist. As you progress, you collect chunks of DNA from fallen enemies. And when you die, you can plug these bits of DNA into your next clone’s genome, holding on to five of them at a time like you’re playing a game of genetic poker. Each strand of collected DNA boosts some stats – health, stamina, speed, resistance, etc. – and diminishes some others, so you’re either stacking boosts in one area to support your particular play style (for example, maxing out your health because you’re bad at dodging rockets, like me), or balancing everything out as best you can, because you’re boring like that. 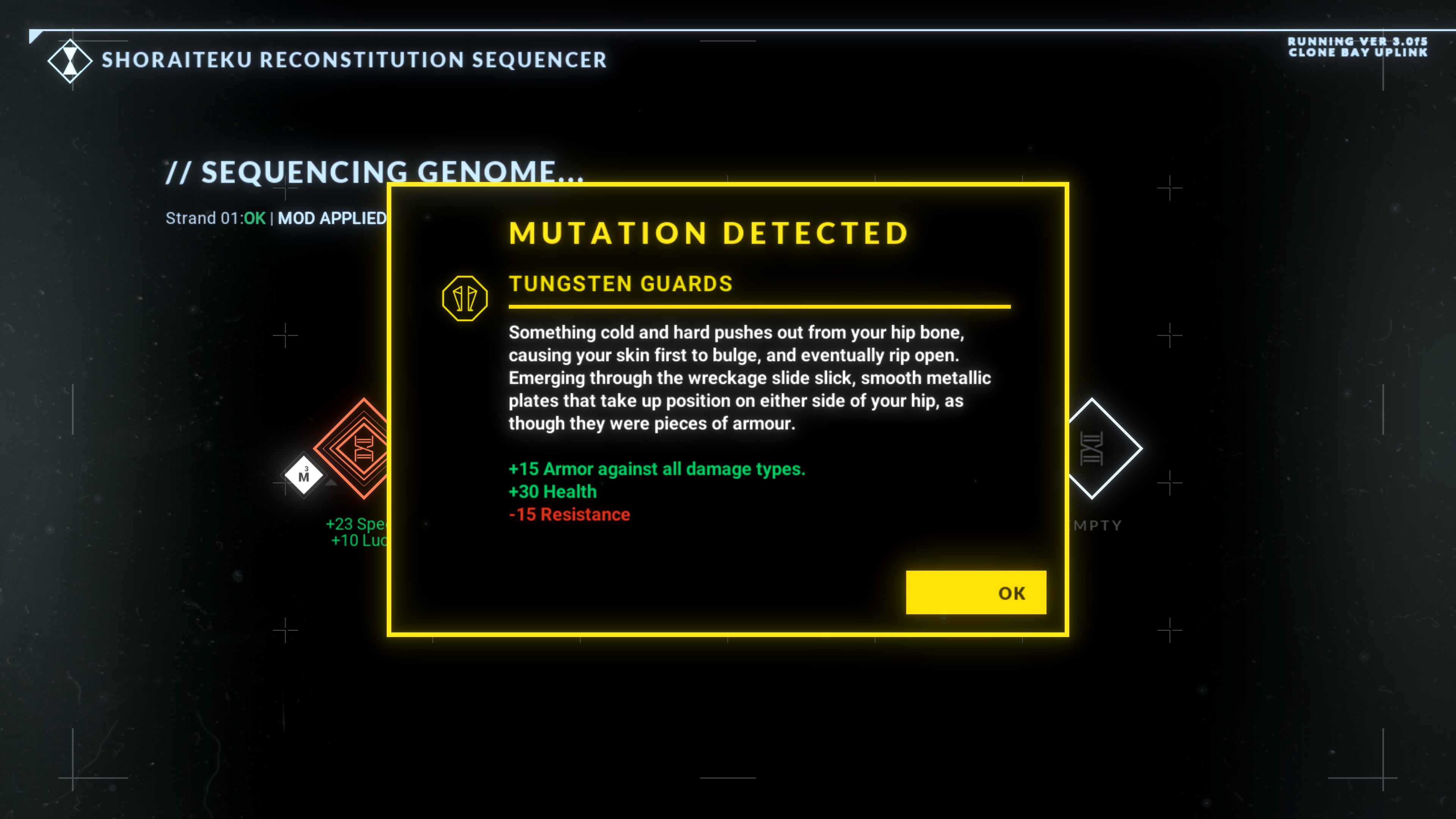 Here’s the even twistier twist. Each time you hit ‘GO’ on the cloner-doodad to bake in your choices, there’s a chance of one or more mutations creeping into the mix, each one giving you trendy new superpowers that last for a few clones. They come in either alien or robotic flavours, mirroring the species of enemy you’re battling as you play, and are accompanied by some beautifully gross descriptions of limbs rotting off and falling to the floor to be replaced by new, wet insectoid appendages, or your eyes bursting like hot grapes, and a bunch of big metal spikes piercing out of your stomach.

It’s graphic and disgusting and I love it, and each horrific, God-disproving mutation is visible on the unfortunate specimen that comes creeping out of the clone-o-chamber, like some ancient Cthulhuian miscreant. You can pretty much turn into a crab-person with the right mutations. In one game I had a giant claw where my arm should be, granting me a buff to melee damage. Instead of a lower body I had a fashionable set of spider legs, and so my usual dodge roll ability was replaced with a new burrowing one. With life having handed me those particularly strange lemons, I adapted my playstyle to get right up close to enemies to maul them to death with my grotesque crustacean features, like vengeful seafood. 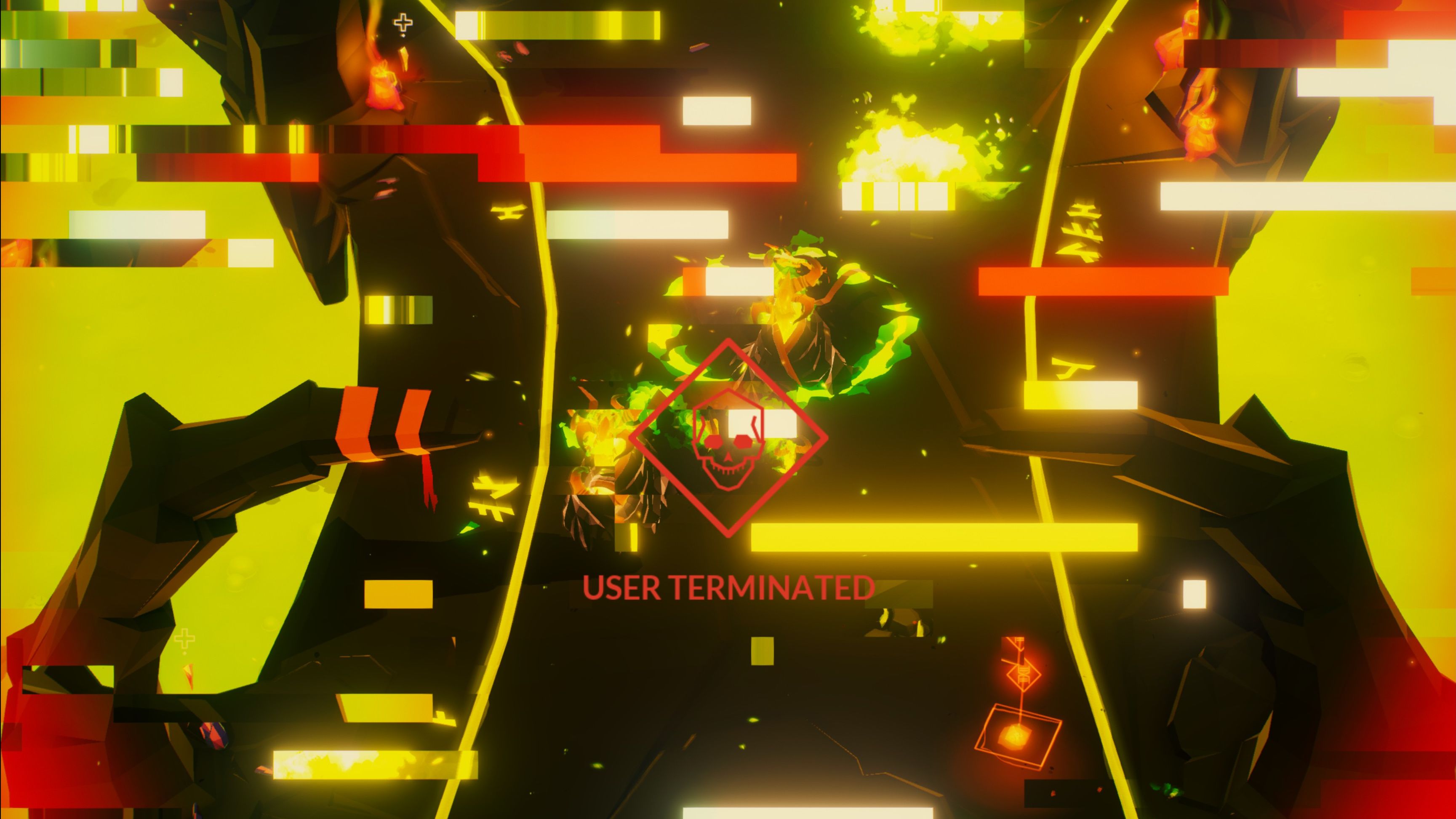 Mutations aren’t just organic either. One of the races you encounter are metal robot folk, so you’ll occasionally find that your DNA has been spliced with the genetic equivalent of a cutlery drawer. Improvements in this arena include having your entire head replaced with a radio transmitter that acts as a keycard to access some rare loot around the place, and a neat set of defensive coils that protrude from your spine and have a chance to zap enemies when they damage you.

If you’ve ever read I Have No Mouth And I Must Scream (or played the 1995 point-and-click adventure of the same name), this sinister convergence of technology and biology will be familiar. Especially if you read it far too young, and now suppress some mild trauma that only surfaces when reading graphic depictions of bodies being mutilated by a cruel and omnipotent artificial intelligence that’s lost its mind and refuses to allow you to die. Which is, thankfully, not a theme that crops up very often. 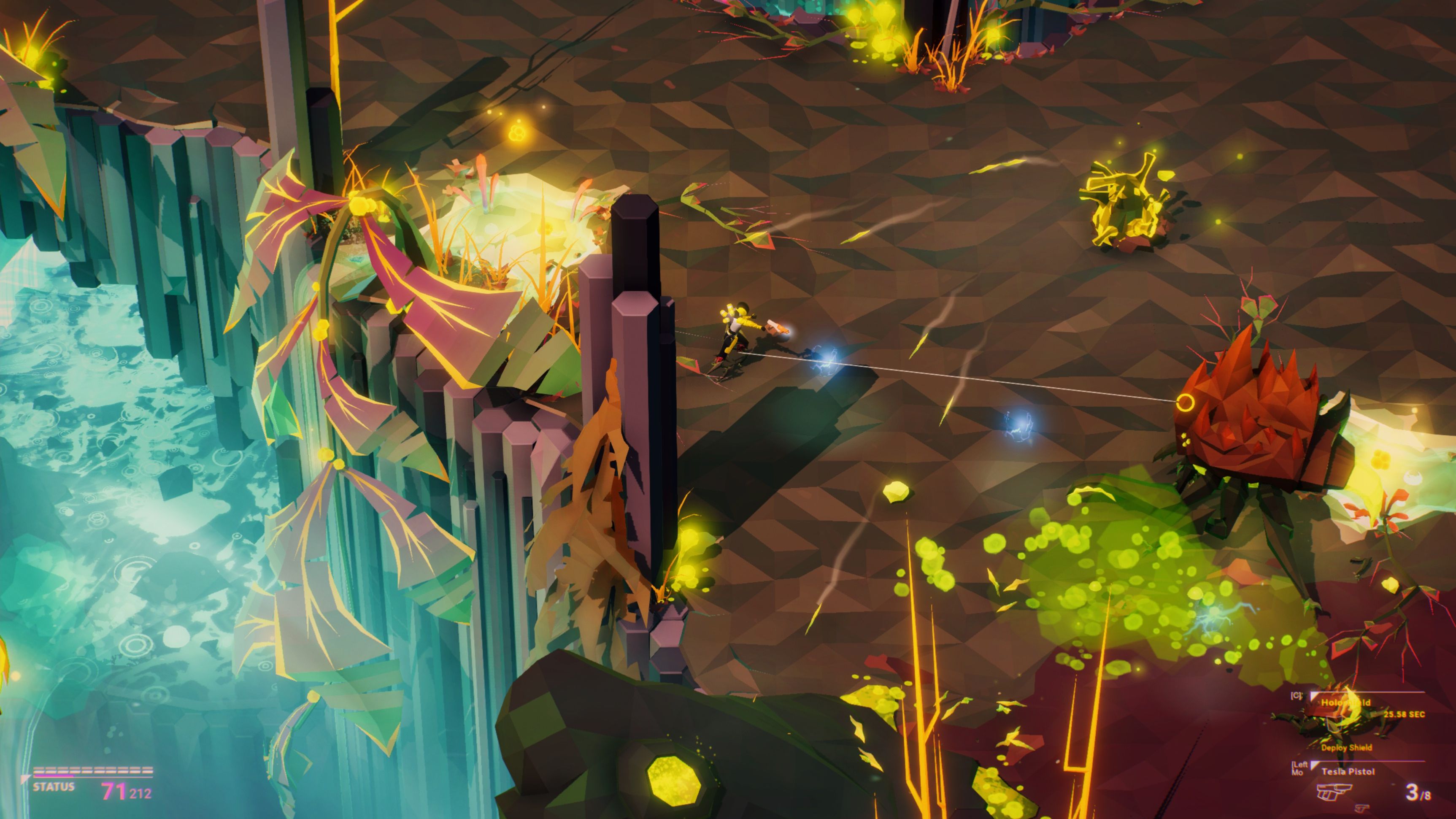 Besides your clone’s body wandering down some evolutionary cul-de-sacs, you’ve got a more typical armory of weapons and grenades and abilities at your disposal. Barring any cool giant crab appendages, you’re most often blasting away at alien gasbags and flame spitting androids using various machine guns and organic, gloop spitting rifles. Levels (of which there are five in this early access version) are randomised, and offer a few detours on the way to the exit, usually containing new equipment held inside alien bases. These bases offer some light puzzling – hit the switches to unlock the doors – or stick you in a room with a few waves of enemies. The rewards are some the game’s best equipment, like a projectile deflecting holoshield, or a leeching tendril that momentarily tethers you to an enemy while sapping their health.

Beacon is littered with nice details too. Some dismembered robots will angrily crawl across the ground towards you, like the morning after the Boston Dynamics Christmas party, or their arms might ping off and fly around before exploding. Storms will occasionally whip across the level, sending down lightning bolts or tornadoes. And there’s that age old trick of letting the robots fight with the acid-spitting crab-spiders while you hide behind a nearby crate, which is always fun, isn’t it?

The game is pretty buggy in its current state. There’s essentially no controller support for now, which is a shame for something that should feel a lot more twin-sticky than it does on mouse and keyboard, and I had to delete a config file when the ‘move left’ key vanished entirely, and I could only run to the right. But Beacon’s core is in place, its grotesque brand of roguelike robocide already enjoyable, and its gene pool wide enough for a few hours of varied, and only sometimes rancid play.