If you click on a link and make a purchase we may receive a small commission. Read our editorial policy.
Premature Evaluation is the weekly column in which Steve Hogarty explores the wilds of early access. This week, he's getting physical in soft-body car sim BeamNG.drive.

Don’t ask me to explain in any more detail, but I’m almost completely certain I understand what “soft-body physics” means having watched precisely one YouTube video about it while high in bed one afternoon, my own soft body draped inelegantly across the pillows and speckled in Quorn nugget crumbs, like some forgotten Renaissance masterpiece. Car simulator BeamNG.drive deals in the physics of soft bodies, objects that, unlike the impossibly perfect “rigid bodies” of pure Newtonian physics, can compress and crumple and deform and twist. This is how physics behaves in the real world, bucko, and if you don’t like how that looks, the early 2000s are calling and they want their standards back.

But you will like how that looks, because BeamNG.drive’s simulation of crashing cars is a consistently joyous spectacle, and has been for the nearly five years it’s been pootling around in Early Access. Still primarily a toy box bolted on to a technical demonstration of a physics engine, it’s been enjoying a slow drip feed of new vehicles and tracks on which to drive them, more robust mod support, fresh campaigns and a couple of new game modes slipped into the main screen.

Despite the content additions, this remains at its core a game about what happens when two or more objects collide with one another at high speed. BeamNG.drive is a meticulously detailed simulation of carnage, dropping into bullet time at the point of impact to treat the player to gory close-ups of metal panels popping and mangling, twisting and pinging off. Vans tumble over cliff edges and begin discarding their doors and tyres, like hot air balloonists desperately ejecting ballast in an attempt to stay airborne. The tinfoil chassis of luxury sports cars roll down canyons and become compressed like metal sausages as they go, each new impact revealing the hardened frame that sits skeleton-like beneath their lurid and aerodynamic, carbon fibre facade. 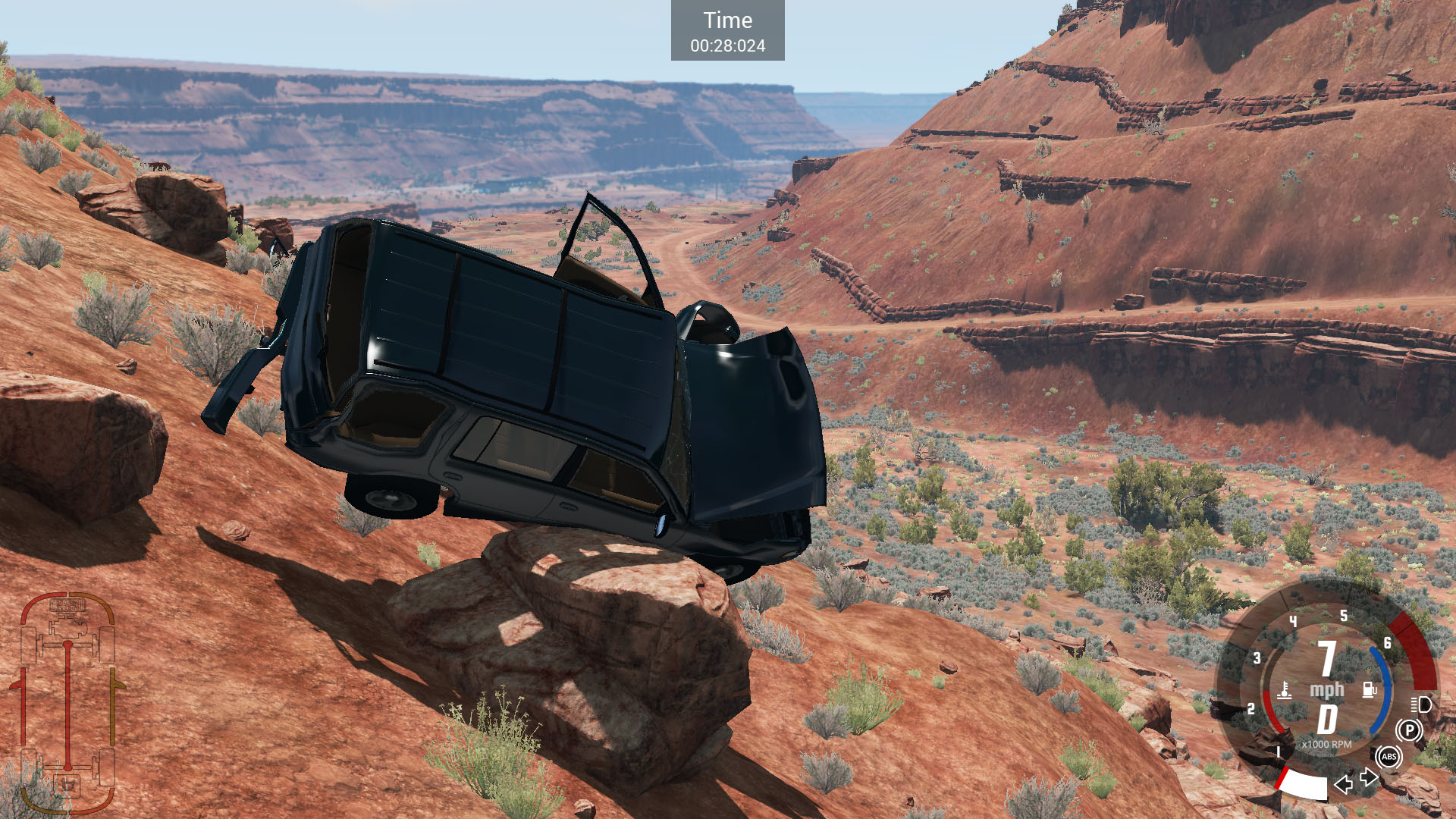 Racing games have had some degree of simulated damage for a long time. The real-world cars of early Gran Turismo games, according to some guys from a PlayStation magazine I used to know, were prohibited from showing damage as part of the developer’s strict licensing agreements with car manufacturers. The protective car makers also stipulated that in no circumstances were the cars ever allowed to flip over, leading to some peculiar looking near-crashes as the laws of physics tussled with the laws of… well, lawyers.

If that’s true, then Polyphonic probably made that concession willingly. Damage modelling is difficult when you have roughly seven or eight spare polygons to work with, and Gran Turismo was a uniquely serious game about keeping your car on the track and doing a good race without ever smiling or laughing. But there is an indirect benefit to simulating an eventuality you don’t wish to happen, and this is where BeamNG.drive stands apart from any other racing game I’ve played. Knowing that your vehicle is made up of hundreds of interacting parts – engine blocks and wing mirrors and axles and bumpers all held together with a set of inscrutable algorithms substantiated by the physical world – makes taking a tight corner inches from the tyre barrier all the more authentically thrilling. 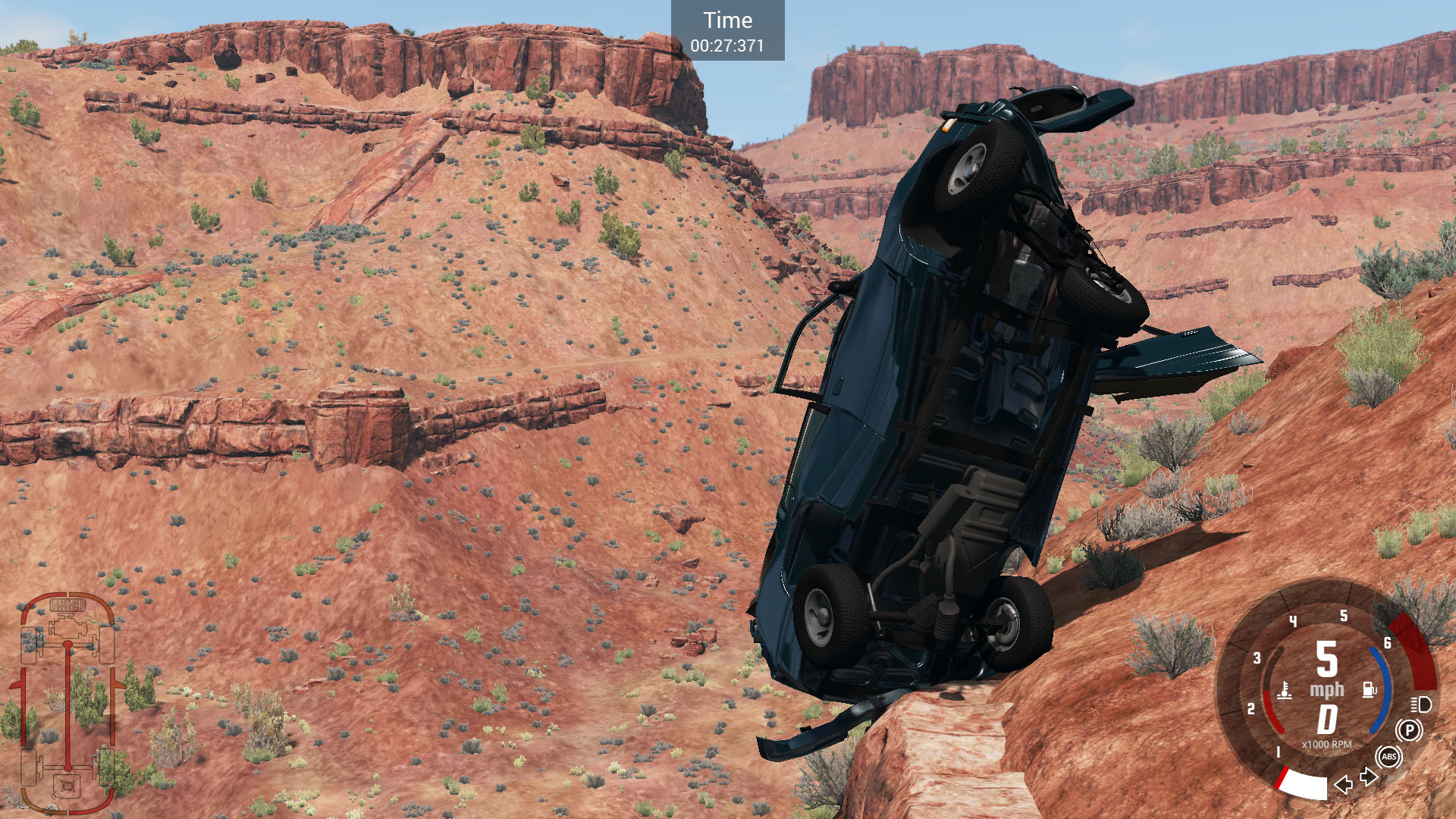 In BeamNG.drive, braking too late could send you cartwheeling into the stands in a cloud of barely identifiable shrapnel, which no matter how lucrative the licensing deals with racing games get, you’ll never see a legally simulated Mercedes Benz SL-R107 do. At least not outside of the German marque’s own testing facilities, and even then I bet they make you sign an NDA promising you won’t tell anyone how freakin’ cool it looked. In BeamNG.drive, the persistent awareness that the slightest mistake you make would have catastrophic consequences on the one-pieced-ness of your car enhances the gratification of not having made that mistake. At any time, 98 percent of the engine’s code hangs over you like a sword of Damocles.

But enough talk of not crashing, because there are plenty of opportunities to let that sword drop. Whole scenarios are dedicated to obliterating vehicles as best you can, by screaming across the Utah desert in meticulous recreations of classic cars just removed enough from the real thing to dodge a lawsuit. You can plough trucks into walls and drive buses into ravines. One mod adds fully simulated planes and helicopters, another recreates Speed. 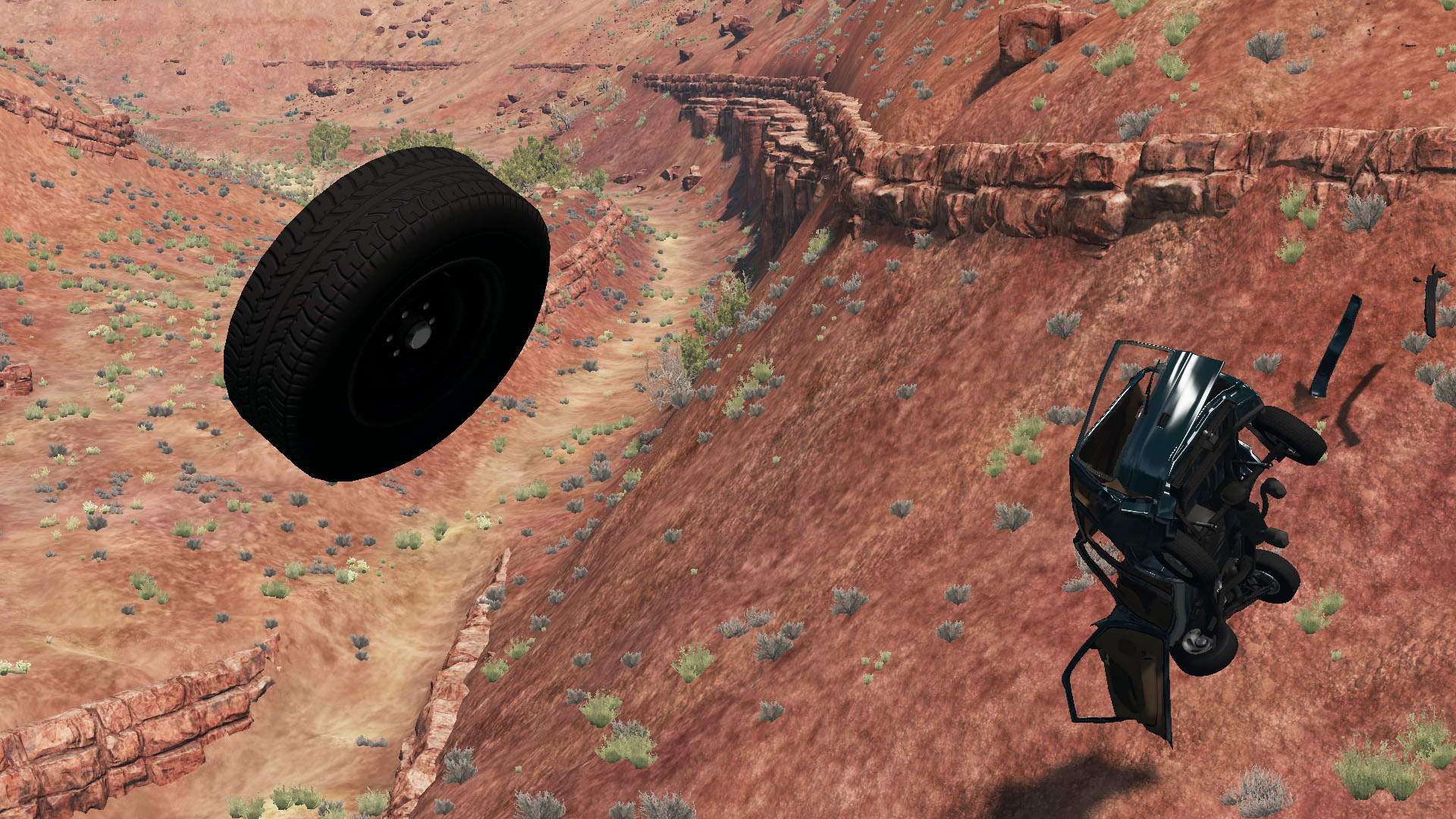 One scenario has you piloting an 18-wheeler along narrow Tuscan lanes in the style of Euro Truck Simulator, while another is a decent approximation of Bus Simulator in which you make stops around a city, opening and closing doors to allow invisible passengers to disembark. And, demonstrating the versatility of the platform, there’s an F-Zero style futuristic racer in which you drive neon-stripped GT cars around floating platforms above Neo Tokyo, complete with its own track making tool.

Once you tire of these scenarios you can drop into the editor to compose your own crashes, placing obstacles and ramps as well as simple AI-controlled cars to ram into. You can record these collisions and play them back from any speed and at any angle, so that you can pretend you’re some kind of important car scientist carrying out a vital experiment, never pausing to wonder what it is about watching and rewatching presumably fatal car collisions that you find so mesmerising. Is it the catharsis of seeing metal fold like tracing paper, or simply how the slowing of time grants several tons of truck a supernatural weightlessness? You’ve been this way since you watched the music video for U2’s Elevation, where Evil Bono touches a floating car, and you’ve simply never questioned it. 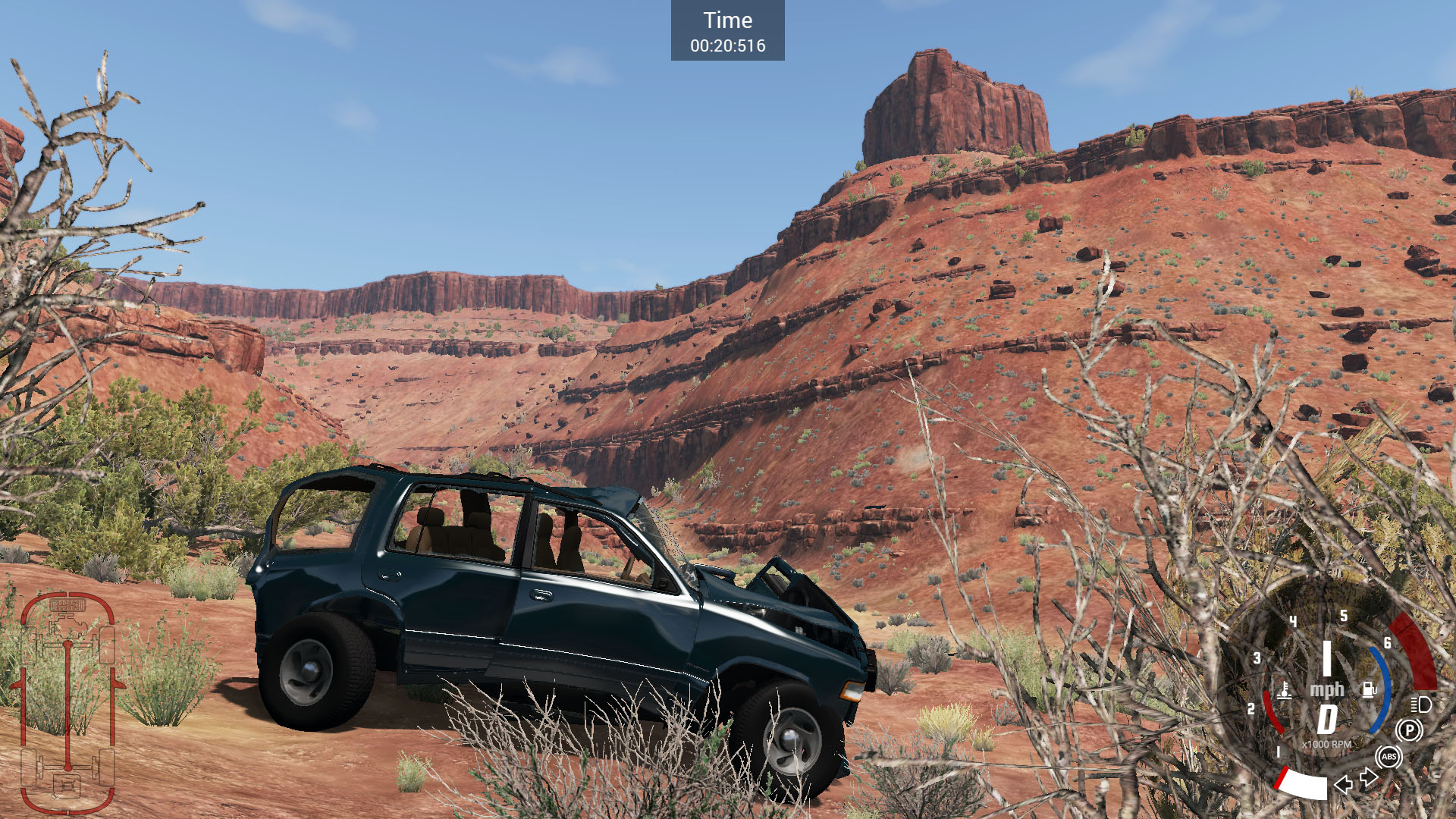 BeamNG.drive isn’t a complete or comprehensive racing game, rather it’s a powerful physics engine on which many enthusiastic modders have built beautiful and interesting things. It feels as bolted together as the vehicles it simulates, and at times about as ready to fall apart – clunky interfaces and performance issues can scupper the experience – but it’s a fascinating distraction to idle away a few hours, and a near perfect simulation of what was happening in my child-brain when I played with Matchbox cars.