It didn’t take long for the deals to start flying across the table. We hovered over the weathered map of medieval Europe, shouting out offers and threats between excursions to the Holy Land. There were marriage proposals, bribes and even an assassination plot or two. Like its PC progenitor, Crusader Kings The Board Game has a knack for generating stories, but it does it in a couple of hours, not a couple of days.

Crusader Kings is the first Paradox Interactive game to be given the tabletop treatment, though technically Europa Universalis did it first by starting out as a board game. It'll soon be joined by Cities: Skylines, Hearts of Iron and a new version Europa Universalis, licensed and designed by different studios. Tabletop developer Free League Publishing is in charge of the dynastic squabbling, and lead designer Tomas Härenstram actually used to work at Paradox, on the Crusader Kings team, no less.

“We’ve been looking for the right board game project for quite some time, and with my background, working at Paradox on Crusader Kings, we felt that we just had to do it,” says Härenstram. “It’s a perfect fit for Free League because Crusader Kings has all of the story, drama and characters; it’s not just grand strategy, it’s also an RPG. So we pitched it to Paradox and here we are.” 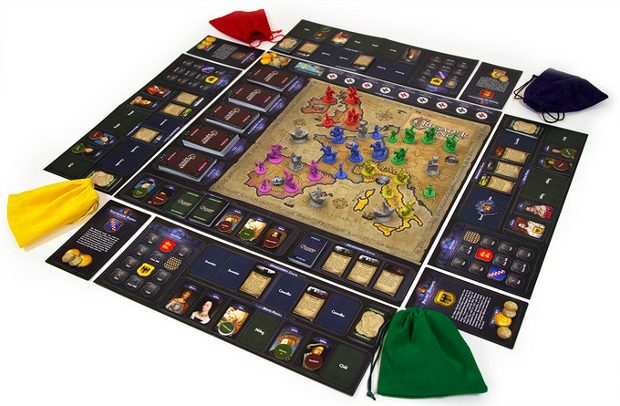 With only a handful of competing dynasties and three clear routes to victory, the board game is a shorter, focused version of Crusader Kings that swaps the sandbox for a more adversarial, competitive approach. Everyone has three generations (that’s nine turns) to defeat every military unit on the map, help the Crusade reach Jerusalem or just have the highest score.

Free League has managed to keep a lot of the grand strategy game’s systems, but they’ve been repurposed. Like Crusader Kings 2, characters can develop a multitude of traits, good and bad, but here these traits are used to increase or decrease the odds of getting a favourable outcome when playing an action card. These cards lets you do all sorts of nefarious things, like inciting a rebellion, but you'll also use them to construct castles, collect taxes and kick your troops into action.

My heir was a kind boy who looked, unfortunately, like Henry VIII, but really what I cared about was the fact that he had a positive trait, giving me a token I could add to my bag. It must have been a challenging childhood, with an ambitious, distant father and a mother whose defining trait was gluttony. We never really connected. I don't think it helped that he looked like a huge, Tudor king for his entire life.

His positive trait came handy later, at least, when I forced him to go crusading. Maybe that would toughen him up, I hoped. I stuck my royal paw into my bag of trait tokens, pulling out a green one. A red token would have meant failure, though there are some special circumstances where a negative trait might have a positive effect. My heir’s trip was a success, and we were one step closer to reaching Jerusalem.

Jerusalem and the Crusades actually take place off-map, while Western Europe is broken up into a handful of provinces. “I’ve seen some comments already saying that there should be many more provinces because our map is quite a lot smaller than Crusader Kings 2’s,” says Härenstram. “If you come from CK2, you might think that there should be hundreds of provinces, just like the computer game, but that wouldn’t work with the kind of gameplay that we’re creating. It’s not very board game. This isn’t CK2, it’s something else that maintains the feel but isn’t just CK2 on the tabletop.”

By sending my spawn off to the Crusades, I also triggered an event, simulating the random crises that appear in Crusader Kings 2. Every action card has an event attached to it, messing up your kingdom, helping your opponents or, less frequently, helping you. Sometimes these events are related to actions, like turncoat Templars joining your cause during the Crusade, but most of them seem to have little connection to each other. It can be a bit confusing when you want to build a castle and you have to decide if it’s worth helping your opponent have a child.

That baby-spawning event cropped up a lot. One player decided, unconventionally, to use it offensively, foisting several kids upon another dynasty. What seemed like a card designed to help out the opposition instead left them to deal with several unwanted negative traits and children that they were desperate to marry or kill off. The table erupted in deals again.

While my heir was in the Holy Land, there was another shake-up in a neighbouring dynasty. The king was dead, replaced by an heir with considerably better traits. Very suspicious! Or it would have been, if two players hadn’t been openly discussing the plot. That’s why diplomacy was invented: so you could talk other people into helping you push your king down the stairs.

“It’s something that I personally really enjoy in board games,” says Härenstram. “Free negotiations are usually possible, so you can offer to help someone in the war effort if they pay you some gold, or maybe let you marry their daughter. You can have these kinds of discussions with a back and forth. It’s up to the players to drive the negotiations, and it really brings the game to life. We wanted to capture the feel of real diplomacy.” 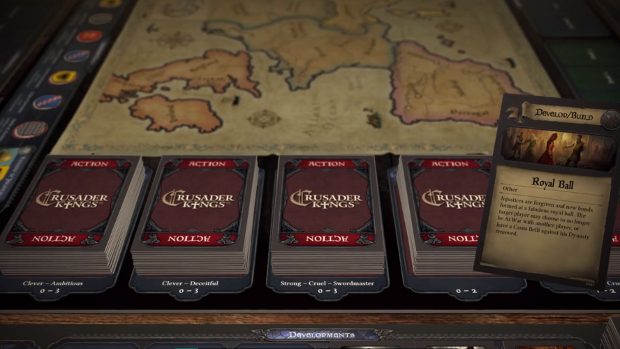 The conniving and bargaining is so open that it seeps into every part of Crusader Kings. There are few restrictions to diplomacy or trade, and there are always opportunities for other dynasties to get involved no matter who’s taking their turn, spending gold to help or hinder, lending the game an almost real-time pace. Sometimes all the diplomacy can derail things; there were a few times when my group had to be reminded whose round it actually was before it became a four-way debate.

“Our goal is for a full game to take two or three hours,” says Härenstram. “If you know the group really well and you’re focused, that’s possible. If you don’t know them so well or you spend a lot of time in discussion, maybe three or four hours. We want the game to be playable in one evening, and for it to be accessible. It’s not this huge game that will take an entire weekend or more to play. That would be cool, but it’s not what we want to do.”

It’s an appealing premise: all of Crusader Kings’ drama and intrigue in the length of time it takes me to get through a couple of years of the PC game. The real hook, though, is the social layer, with everyone looming over a map, making pacts and plotting in whispers. Crusader Kings The Board Game does what Crusader Kings 2 just simulates.

Crusader Kings The Board Game is due out later this year. It’s also got a funded Kickstarter that will end on June 19.