The video game Below is absolutely going to happen. I know you can't read my tone here but I am using my most Serious Voice. It's probably coming out now. It may already be out. Who knows? Maybe we've already played it together and had a wonderful time. Do you remember that night? We all shared secrets and ate crisps. I had too many beers and you were like "Brock, don't get drunk, we've been waiting so long for Below, we need to enjoy it together." I said something inappropriate, but we all circled back and had a wonderful time. I apologized later to you in private and we're all good now. Maybe we're even closer because of the experience.

Point being, this weekend was another big video game conference and another chance for let leak a bit of news on a game that was first shown to us in 2013. And just enough leaked for us to have the conversation about the inevitability of Below yet again.

I don't mean to sound like an ass, and certainly it's hard to sell the jokes here in print. I want to play Below quite badly. The action roguelike was first shown at E3 2013 with an announcement in 2016 that the team was going to start a polish instead of rushing the game out the door, thereby indefinitely delaying it. The game has a procedural generated world, permadeath, multiplayer elements and (as Phil Spencer once promised) "mystery!"

Capybara's Kris Piotrowski has promised a roguelike with difficulty comparable to "roguelikes of yore" and has returned to his musical collaborator Jim Guthrie who built an all-time great score for their game Superbrothers: Sword & Sworcery EP. But Piotrowski has also worked on Cartoon Network projects in the interim and the absolute dearth of new information has been upsetting to say the least. Three years of polish with no updates is akin to what Radiohead did when they deleted all of OK Computer and started from scratch and YES I WILL MAKE RADIOHEAD COMPARISONS BECAUSE I'M MAD AT BOTH OF THEM. (I would never be mad at a creator, I just don't want to keep playing the will they/won't they of "Where is this game?")

Also, just looking back at our coverage of the game, check out the whiplash on these news hits: 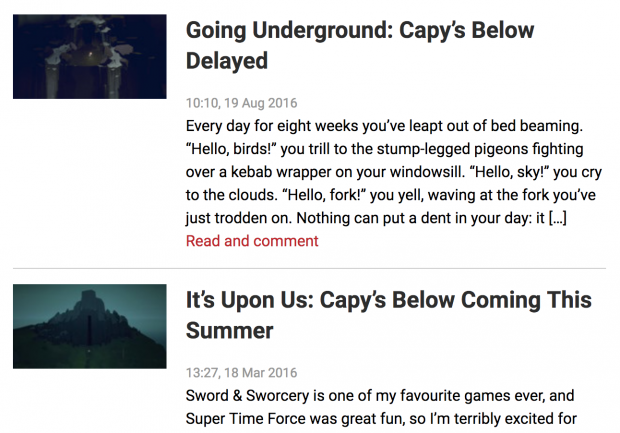 Well, to coordinate with PAX East, here is 25 minutes of gameplay footage just released to IGN. See, Scully? The truth is out there. If there was any kind of press release to follow-up this footage, with say, a timetable? That would be a nice thing to do.

In other news, it feels like this weekend at PAX has been a time for a lot of 2013-2014 announcements to finally see the light of day. Last Year: The Nightmare has slunk from the shadows. Personally, there's one 2014 game announcement that I still haven't seen any movement on and I care about this ten times more than I care about Below. I know that I'm mostly alone on this but I'm a bomb... and I'm about to go off... at some point in the next few years.

Follow Below's official site for updates. Also, it's just a very pretty web page. The game is due for Xbox One X and Windows.