For this week's Premature Evaluation, we've tossed Fraser into Bermuda - Lost Survival's unfriendly ocean, where he'll have to survive on whatever he can steal from the water.

I have, over the last couple of years, misplaced a yacht, crashed a yacht and fallen out of a yacht. You might say that Poseidon and I have a troubled relationship. I just want to go sailing, but he has other plans. I’ve got some experience with nautical misadventures, then, which is why I expect that Bermuda - Lost Survival will be a walk in the park, albeit a very soggy one.

After picking my gender and nothing else, I find myself stuck in a dingy in the middle of the ocean. I have no idea how I got here, but for morale I like to think that, rather than being the victim of some tragic accident, I’ve actually chosen to be stranded in the hopes of getting my own Bear Grylls-style survival show. Will I drink pee to get on the telly? Let’s find out. 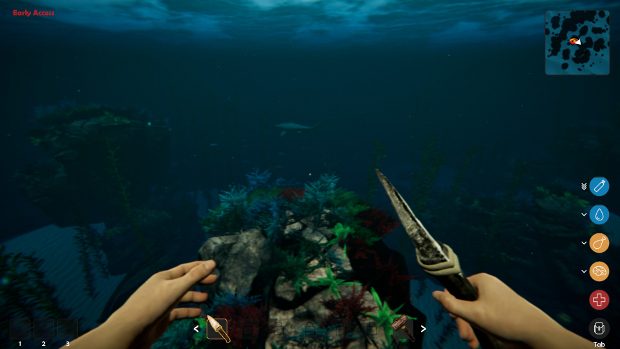 The ocean is a considerably less forgiving or human-friendly place than the typical bucolic survival game setting. With this tiny raft, and nothing but a twinkling blue expanse as far the eye can see, survival seems like an insurmountable challenge. Since the sea makes thriving inconceivably difficult, one might expect a game like Bermuda to posit some interesting theories about how to stave off death.

Allow me to introduce you to my magical crafting box. 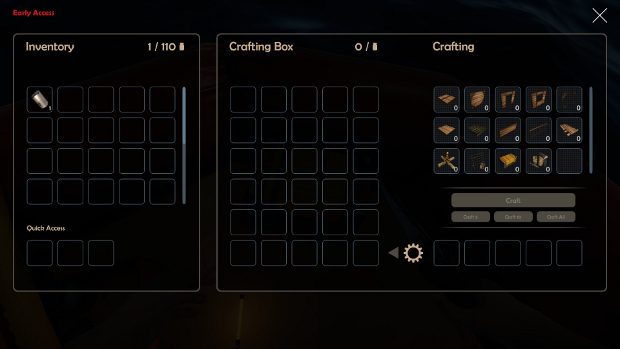 This box makes it possible to construct wooden walls, ceilings, floors and workbenches using detritus scattered across the seabed. So, despite the fact that I am, lest we forget, playing a game set at sea, I’m building an ugly wooden house. Sure, it’s on a pontoon, but it’s still, ultimately, the same wooden hut that everyone ends up building when they fire up a new survival game.

It’s bizarre how quickly Bermuda drifts away from its stranded-at-sea conceit. The crafting system could easily be transposed to a medieval survival game. Indeed, there’s little at all about Bermuda that takes advantage of the setting, aside from the additional annoyance of having to worry about oxygen as well as food and water. Having spent quite a bit of time getting spooked in Subnautica, Bermuda feels especially conservative. 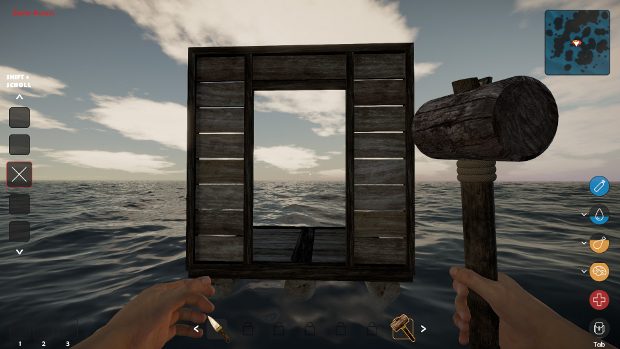 Trees might be hard to find here, but luckily I’m floating above a considerable number of old, wooden shipwrecks. Not only can I get the wood I need for my hut, I can tidy up the ocean. This is my home now, and I won’t have captains leaving their ships all over the floor. I flail at them with my knife, collecting the countless sticks that are a result of this brutal human-on-ship violence. Caught up in this woodlust, I start maniacally stabbing the nearby chests, as well, netting me even more sticks.

My rampage ends when I start to notice that my knife is very particular about what kind of wood is worthy of being turned into sticks. It doesn’t like oars, for instance, or planks of wood, and it only enjoys stabbing very specific parts of ships. I end up spending more time aimlessly stabbing inanimate objects than gathering resources. When I run out of air, I come away with only a modest haul. 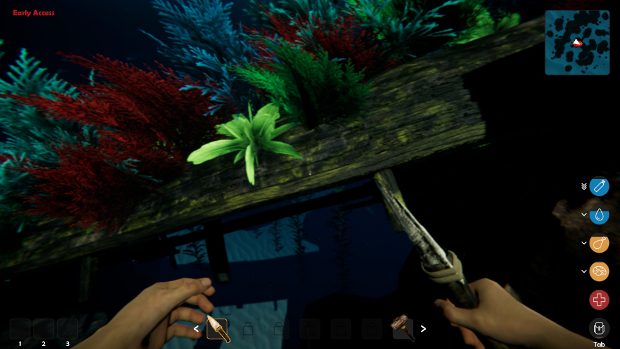 I dive down again, before returning with another pile of junk. Rocks, seaweed, coral, more wood -- enough so that I can start building my stupid house. And by start, I mean that I plonk down the floor and a doorway before running out of wood. Back down I go, over and over for an hour. I swim to the same places, gather up the same materials and stare out at the gloomy blue void. The real horror of being stranded in the Bermuda Triangle is the unrelenting tedium.

To spice things up, I ditch the construction work and head out into the unknown, far beyond the reef that I've been swimming around. The unknown, lamentably, is much the same as the known: large stretches of emptiness, punctuated by rocks, coral and shipwrecks that all blend together so that, without a map, it would be impossible to not get lost. It’s probably only been about 10 minutes since I left my half-built home, but that’s also 10 minutes of me just holding down one key and going straight forward. Even the sharks are bored.

Look at this guy. No motivation whatsoever. 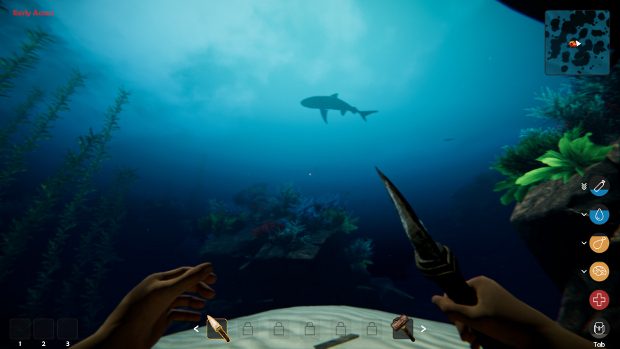 The sound of my frantic heartbeat informs me that I’m dying of thirst (it happens very quickly), forcing me to use the last of the supplies in my inventory. With that, my expedition is cut short -- if I don’t turn back straight away, I’ll definitely die. I tell myself I’ll stock up on supplies and come back, but I know it’s probably not true.

Back home, it becomes clear that I’m going to be completely out of supplies in a day, and I don’t have any method of getting food or water. There’s nothing in the crafting menu, but I can create another workbench that promises to add new blueprints to my repertoire. Unfortunately, I’ll need a lot of scrap metal, the one resource that’s been eluding me. I’ve found some in my inventory several times, but I can’t recall ever actually knowingly picking a piece up. Maybe I’m going mad? The sea can do strange things to a person, like making them wear Hawaiian shirts or consider having a bird as a pet. 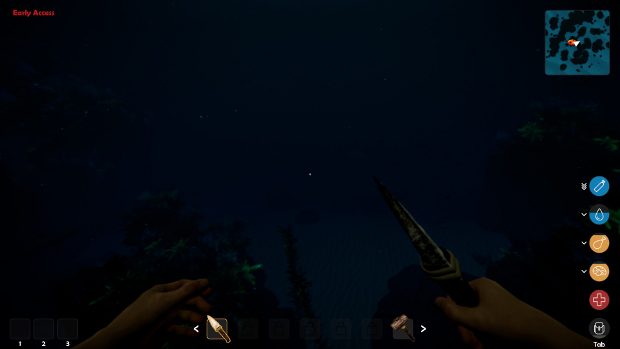 I swim in circles ceaselessly, hoping that I’ll randomly come across more scrap metal. I do, on occasion, yet I still have no idea what scrap metal looks like. It’s never enough, anyway. There’s no part of this hunt for materials that’s remotely engaging. It’s plodding busywork and nothing else. And the whole time, the survival elements -- thirst, hunger and oxygen levels -- add only frustration, never tension. There aren’t any moments where I’m forced to decide whether to push on through a labyrinthine cave or turn back to replenish oxygen, for instance, because I know there's nothing interesting ahead of me. It amounts to going through the most boring of motions, absent any kind of threat or sense of achievement.

Perseverance pays off, however, and I finally gather up enough scrap. Et voila, one… log and hammer. 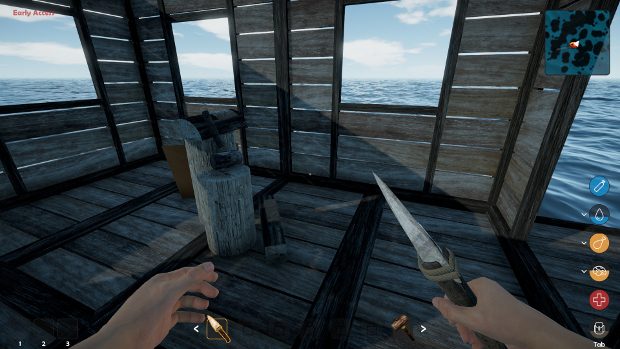 Poseidon’s curse continues to mock me, because this thing that I’ve made requires even more scrap metal before I can create anything from the crafting menu. I can’t escape it. It wants more wood, too. And more rope, which I’ve been making out of seaweed. All this before I can even cook food. I can build a house on the water, but I can’t cook a fish.

After realising that there’s an entirely different crafting menu nestled within my inventory -- for some reason it doesn’t look anything like the others, on indeed any kind of crafting menu -- a spear, an axe and a bottle get added to my list of tools, speeding up the gathering process considerably. I’m finally able to catch fish and collect water, too, which I can eat and drink after going through the cooking and desalination process, though not before gathering up yet more materials so I can construct a fish BBQ and a simple water filtration system. So I’m making a bit more progress, but the boring cycle of uneventful dives and crafting medieval tools persists. 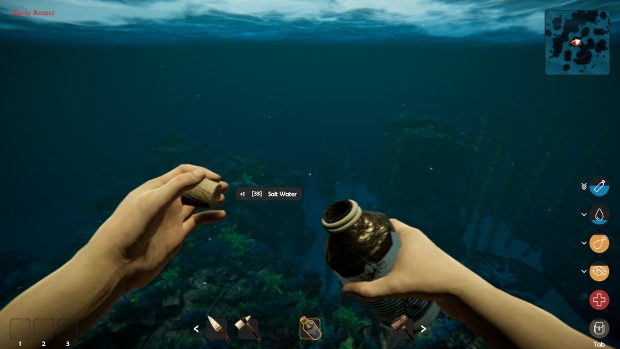 On the Steam page, there’s mention of all manner of exciting things, from dynamic ecosystems to temples that hide the secrets of the Bermuda Triangle, but all I’ve seen is a simple survival loop with nothing else supporting it. Painfully slow swimming has stopped me from properly exploring, though, so I decide to throw together a raft -- I’ve just unlocked the option -- and see if there are any thrills hiding in the rest of the world.

This of course means that I find myself back on the seabed, scrounging for basic materials. I’ll also need lots of food and water for my journey, meaning more time spent preparation. It takes 30 minutes to get the raft built and all the supplies gathered, and then I’m off. I head in the same direction I swam towards when I almost died from dehydration. This time I am over-prepared, if anything. 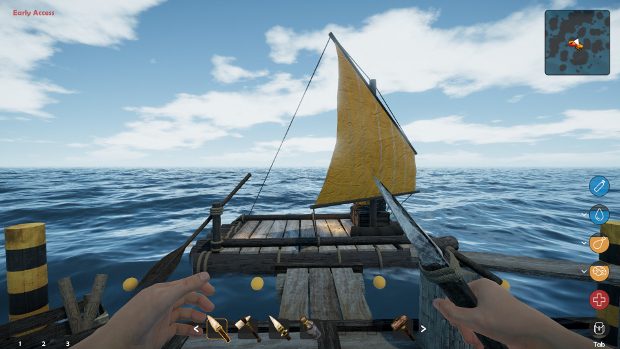 Sailing, it turns out, is actually an even less pleasant way to navigate the Bermuda Triangle than swimming. Sure, it’s faster, and I don’t have to worry about running out of air, but in all other ways it is a truly miserable experience. The lurching and bouncing of the raft would be almost comical if it wasn’t also completely nauseating, and then there’s this wonderful view. 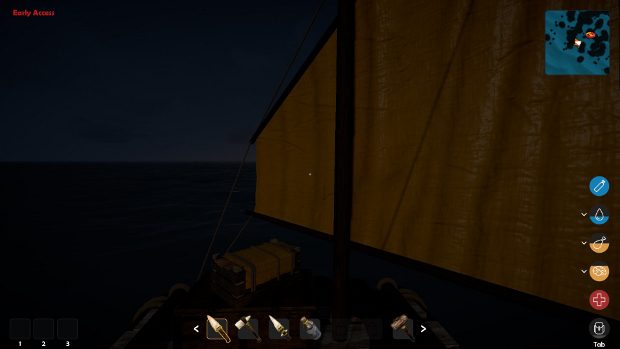 Sailing really is the most sophisticated way to travel.

I’m overjoyed to finally reach my destination, a peculiar ring of rocks that, looking at the map, calls to mind an amphitheater. Could this be the the mysterious ruin I've been looking for? An archaeological adventure to break up the monotony of picking up bits of wood? No, it’s just a bunch of rocks again. 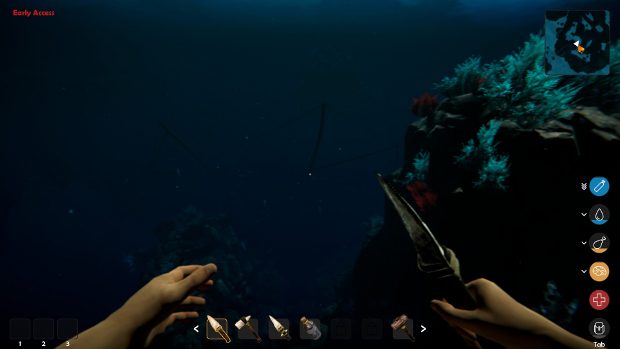 The real difference between this area and the area I’ve just left is iron. This sector has it. With iron I can make more stuff, but since I have an infinite supply of water and fish, and seemingly the best raft I can make, I don’t really need anything else. I’m self-sufficient. It feels like a waste to have prepared all of these supplies, however, if I don’t keep going. There’s more ocean out there, waiting to be conquered. I hop back on my terrible raft and jet off towards the horizon.

There is indeed more ocean out there, but nothing else. Just miles and miles of sand. I swim into the darkness, further and further from the safety of my raft, until my lungs can’t handle it anymore and I have to rush back to the surface. I can’t go on another uneventful voyage back to my floating house, so this is my new home. A wee raft floating above a vast nothingness. Thank goodness I packed so much fish. 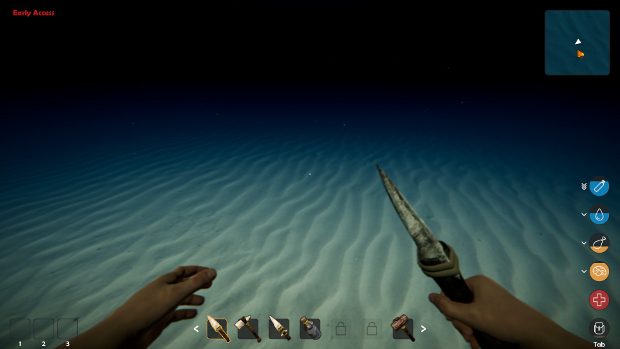 Bermuda - Lost Survival is, aside from its setting, barely a nautical survival game. The ocean is wasted on a gathering and crafting grind that’s without a single innovation or fresh idea. It’s coming to the game late, years after the likes of Subnautica, Salt and Stranded Deep, and instead of leading with the hooks touted on the Steam page, it leads with wooden huts and groping around in the dark for broken bits of wood.

While the developers seem to be communicative on Steam, I’m not sure that they have their priorities right. A big content update was recently pushed back in favour of a performance patch, for instance, which is a little strange for a game that still has at least a year-and-a-half of early access development to go. I guess hunting for scrap metal is more fun with a consistent frame rate.