I felt the rise of that old familiar feeling. I hated it. I welcomed it. We're going back to Max Payne 2. With Control out now and putting Remedy back on the map, we're diving into their 2003 hit, and back into a world of slow-motion gunplay, over-the-top twirling reloads and mods absolutely obsessed with The Matrix and early 2000s action movie soundtracks. In fairness, the Max Payne 2 mod scene has been largely stagnant for the past few years, but that doesn't mean dead. Let's take a look at some of the more interesting scrapes Max and pals have shot themselves out of. 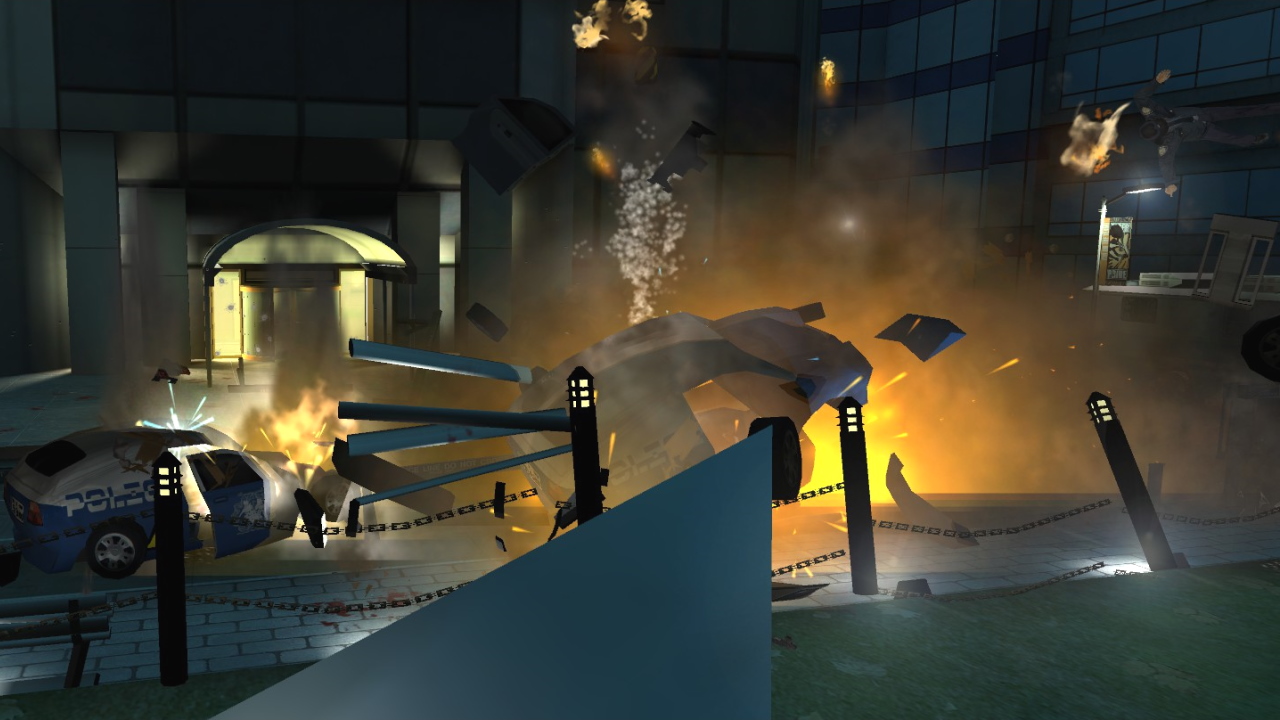 Max Payne 2 might not have many mods, but Remedy made them easy to install and run, with most unpacking to your Max Payne 2 directory and letting you choose which to run at launch. Many mods also recommend adding the command line options '-skipstartup -developer -developerkeys' to the end of your shortcut, or Steam Launch Options (right click on the game in your library and look in properties) - no reason not to, really. So long as you're patched up (or playing the Steam version), all you need now is to install one pre-requisite, and one quality-of-life mod.

The Max Payne 2 Weapon Patch is a little tool that externalises some weapon stat values for monkeying around with, and is required for some mods. The Max Payne 2 Widescreen Fix also makes the game fully compatible with modern monitors, though some mods have effects that look weird at anything other than 4:3 ratio. If you encounter one of these, you can just edit the Widescreen Fix INI file in your Payne 2\Scripts folder and switch to a stretched HUD by changing "FixHud = 1" to a zero. The UI won't be at the right aspect ratio, but everything 3D should be.

One of the best user-made additions to the original Max Payne was the humbly named Kung Fu Mod. Perhaps not very in keeping with Max's dour film noir monologuing, it added a complex assortment of Matrix-inspired dodges, flips, kicks and melee attacks (including a deeply satisfying bo staff) to the mix, and made for arguably the most entertaining way to replay the game. Max Payne 2 modders struggled for years to replicate those glory days, but never quite managed to wrangle the game into the right shape. So they went in a different direction.

Kung Fu Evolution feels like a big box of action figures to smash into each other. Melee only with hands, feet, knives, swords and the occasional Adamantium claw. It features a tutorial Dojo (lifted from The Matrix, natch) where you can learn the moves of thirteen characters, ranging from Bruce Lee to Albert Wesker (from Resident Evil) and Riddick. The mod has its own story campaign, plus a bunch of Dead Man Walking maps. Some against swordsmen, some against zombies, and one loopy scenario where Wolverine patrols for ninjas until Vergil from Devil May Cry interrupts.

As wild as its scenarios and as impressive as some of Kung Fu Evolution's animations are, it never quite manages to replicate the flow of the original Kung Fu mod. Moves require unintuitive combinations of buttons to be held down, and attacks are hard to aim once fully committed to. Still, the fact that this mod exists, let alone on this scale is testament to the quixotic determination of its creator. Worth a play, if only to see the outer limits of what's possible in terms of modding the game.

Two chapters of an episodic series that never got finished, but is absolutely worth playing anyway. If Kung Fu Evolution is going all-in on everything that Max Payne 2 isn't and hoping for the best, this is doubling down on everything the game does right. A bespoke near-future setting (let's just ignore that it says 2014) allows for an utterly implausible pair of sci-fi super-soldier rampages. In the first mission you're shooting your way out of a building and through an entire city's worth of militarised police (multiple choppers and tanks included), and the second mission is an assault on a heavily-guarded corporate HQ.

Despite having a very distinct feel, the core combat is nigh identical to vanilla Max Payne 2 plus a few extra weapons like a heavy machinegun and an unlimited-ammo minigun. The environment just lends itself better to Michael Bayhem, and the enemy density means that you can keep bullet time combos going for much longer than the original game. These are also beautiful maps, full of explosion-heavy setpieces, decent voice acting and lots of bespoke textures. It's just a pity that the project fizzled out in 2008, and very little has come close to matching it since. 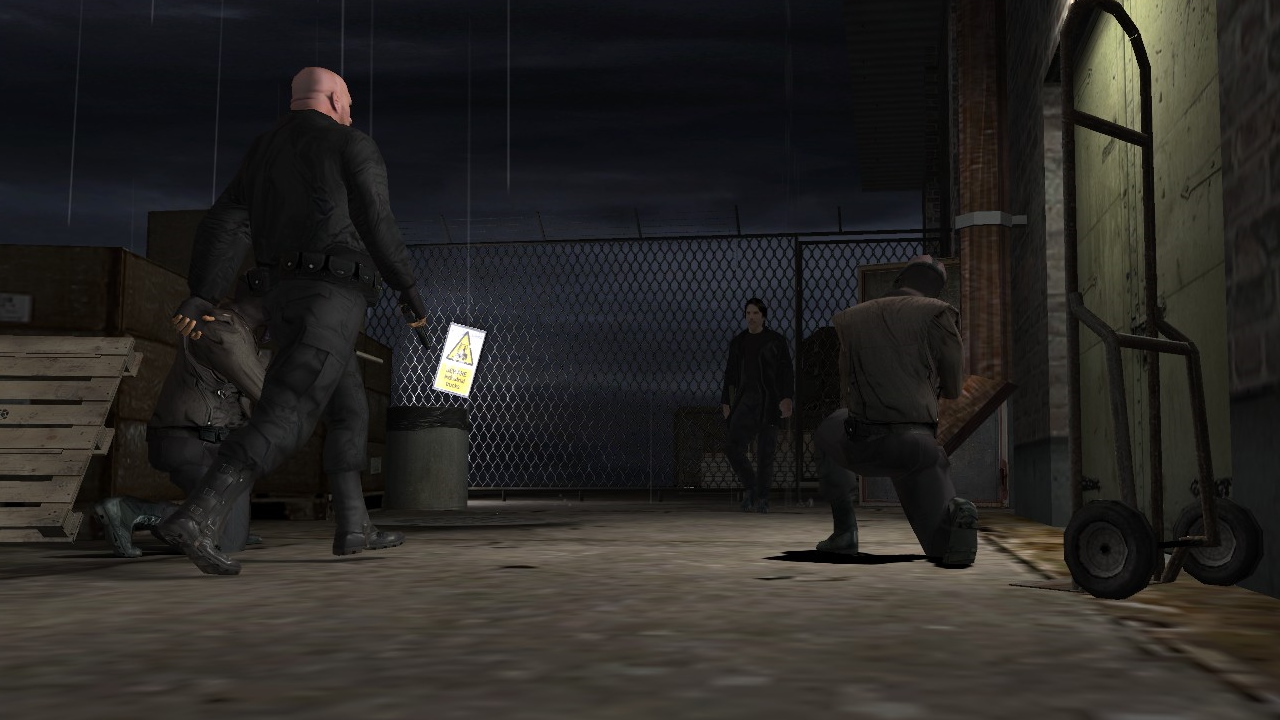 Another total conversion project from relatively early in the game's life, this time replacing Max's world of comicbook grime with Hollywood sheen. Or Cruise, as the case may be. A seven chapter new campaign with some impressive levels, and a Gun Kata system lifted from the movie Equilibrium set this one apart from the crowd. Combat is Payne standard for the most part, and with fewer health pickups than you might be used to.

Still, these are good, well-paced levels that manage to tell a story without getting bogged down in too many cutscenes, a sin that Max Payne 2 proper frequently committed. Also credit to the mappers for finding multiple opportunities to shoot enemies through collapsing railings. My only real gripe with it is that enemy variety could be better. I'm pretty sure I've killed three or four guys in the same room all with the same face. A sinister new conspiracy for Ethan Hunt to explore, or just budget constraints on a mod? We'll never know.

A semi-recent mod that tries to bring Max Payne 2 a little closer in line with its Rockstar-developed sequel through more detailed effects, character models and some combat tweaks. While they obviously can't recreate the painful-looking physics driven dive animations, they nail a whole lot else, replicating MP3's limited weapon slots and less messy gunplay. Shotguns in particular feel a lot more useful and satisfying. There's a bundle of skins to pick from when playing Dead Man Walking mode, including John Wick, for when you want to be the other super-gun-killguy for once.

Payne Evolution manages to replicate a lot of the semi-glitchy camera effects from Payne 3, as well as that classy death screen, although some borrowed details just feel pointless. Why is there a popup saying I got 75 points for a headshot when there's no scoring system? Ah well, at least there's plenty to chew on. Payne Evolution (and many other big mod compilations for MP2) includes four popular level packs by other authors. Max Payne Chronicles, Boiling, Mona The Assassin and The Aesir Project provide a handful of new mini-campaigns to test out the limits of the Evolution combat. 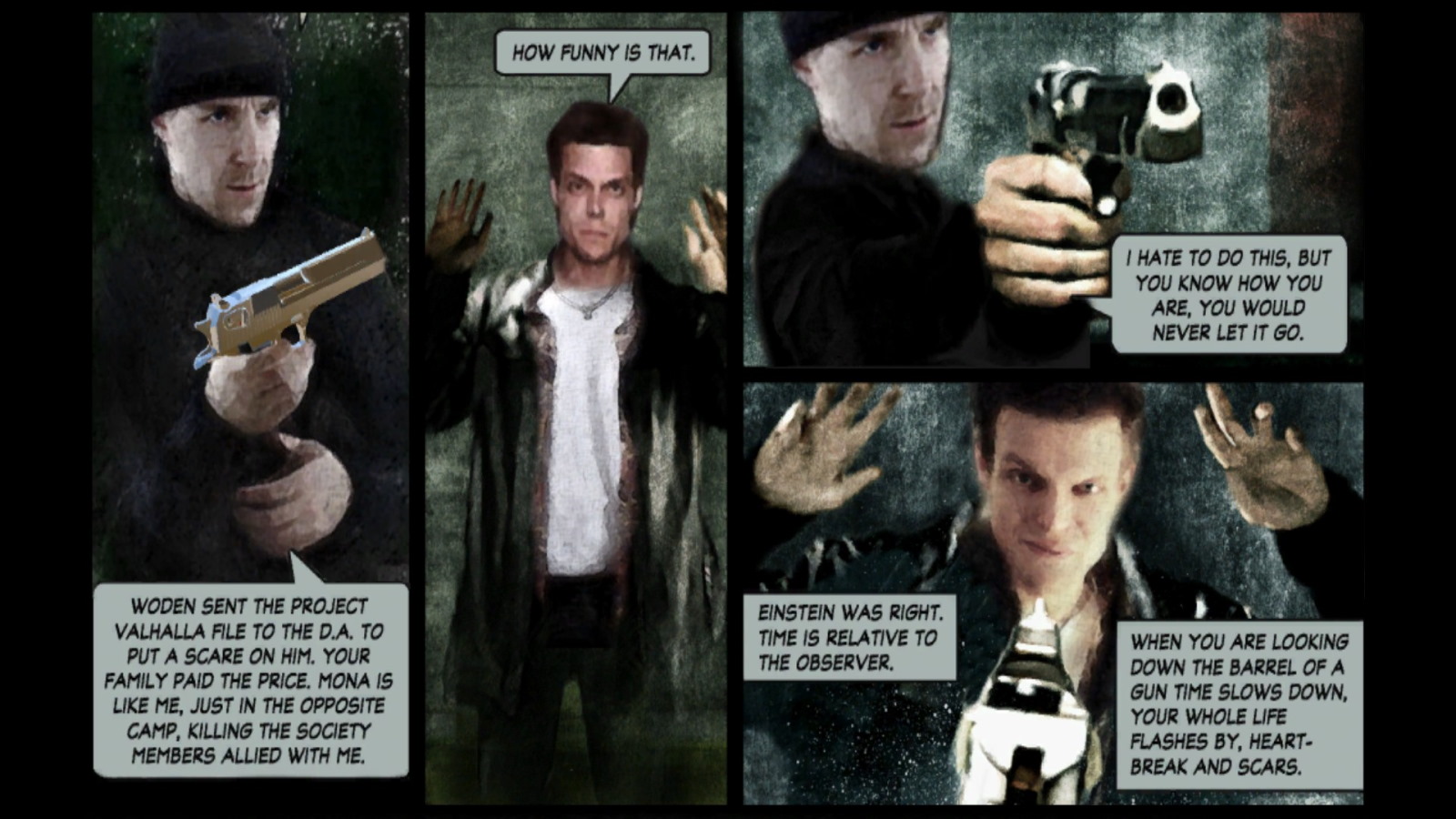 A new release by the Old School Team, and the Yin to Payne Evolution's Yang. Rather than try to push Payne 2 into the future, this one regresses it closer to the original, and they've gone to astounding lengths. Sam Lake is back in his original starring role, and the mod goes the extra mile and re-draws almost all the comic-book cutscenes using the gurning photo-based art we knew and loved. The changes here are mostly visual (some minor balance tweaks aside), but there's just so many of them it's hard not to be impressed. This mod is a testament to just how much its creators loved the original game's offbeat aesthetic.

Mods don't always have to be the biggest or the best to get featured here. Sometimes they can be small and utterly baffling. I'm not entirely sure why, but modder Eric Yockey decided that what Max Payne 2 needed was team botmatches from Bungie's 2.5d Marathon FPS series. And somehow it works. From the messy, wildly inaccurate assault rifle to the satisfying dual-wielded shotguns, it manages to look, feel and sound like Marathon. And yes, the rocket launcher is still the be-all, end-all of combat. Just make sure that you're not shooting the blue bots; they're on your side.

While I can't entirely recommend this one, I am still in awe at the ridiculous audacity of it all. A total conversion, shoehorning as much content as possible from Volition's 2005 Punisher game into Payne 2. It's an odd fit, and has the nerve to remove the bullet time button, but I'd be lying if I said I didn't have some fun holding down the fire button and mowing down preposterous numbers of Yakuza. Compared to Payne, Frank Castle is an unstoppable wall of meat, with regenerating health and a 'rage mode' charged up by killing that makes him extra invulnerable.

Punisher has a small campaign of its own (with some comically bullet-spongy bosses), a handful of standalone scenarios and also a partially converted version of Max Payne 2's original story. While you hear Max burbling away at times, and the comic pages are unchanged, some cutscenes have been reworked to fit The Punisher's more direct solution to crime. The characters are re-cast too - Mona Sax is now Black Widow, because of course. It's all very janky and rough around the edges, but there's a certain mad ambition here as it hammers a square peg into a round bullet-hole.

And that concludes our latest trip across the potholes of memory lane. While Max Payne 2 never drew crowds of mappers and modders like I hoped it would, it's nice to see some new stuff (like the Old School mod, released for Max's 18th anniversary) still happening. Even without much on the horizon, this lot should keep you dodging bullets on the cheap for a few days more. Longer, if you play it in slow motion. As always, this is just a few that either appealed to me or (through janky ambition) caught my eye - if you've any personal favourites, share them in the comments below.