Every pixel is simulated in Noita. That means it can be dull or deadly, and react like its real-world counterpart (or, you know, its unreal-world counterpart). Throw in the OTT spells of your wizard, and the burning, electrified, or weird counter-spells of the enemies, and you have a perfect platform for mods.

There are no total conversions or complete overhauls in this list, but changing too much of Noita would take away from what makes it wonderful anyway: the chaos. You're not here to see what it would be like if Half-Life were remade using Noita. You're here for spells, potions, and a whole lot of effects.

How to install Noita mods

Noita is integrated into the Steam Workshop, and the game has its own mod manager. That means you simply subscribe to the linked mods and you can enable and disable them from Noita’s menu. That was easy! 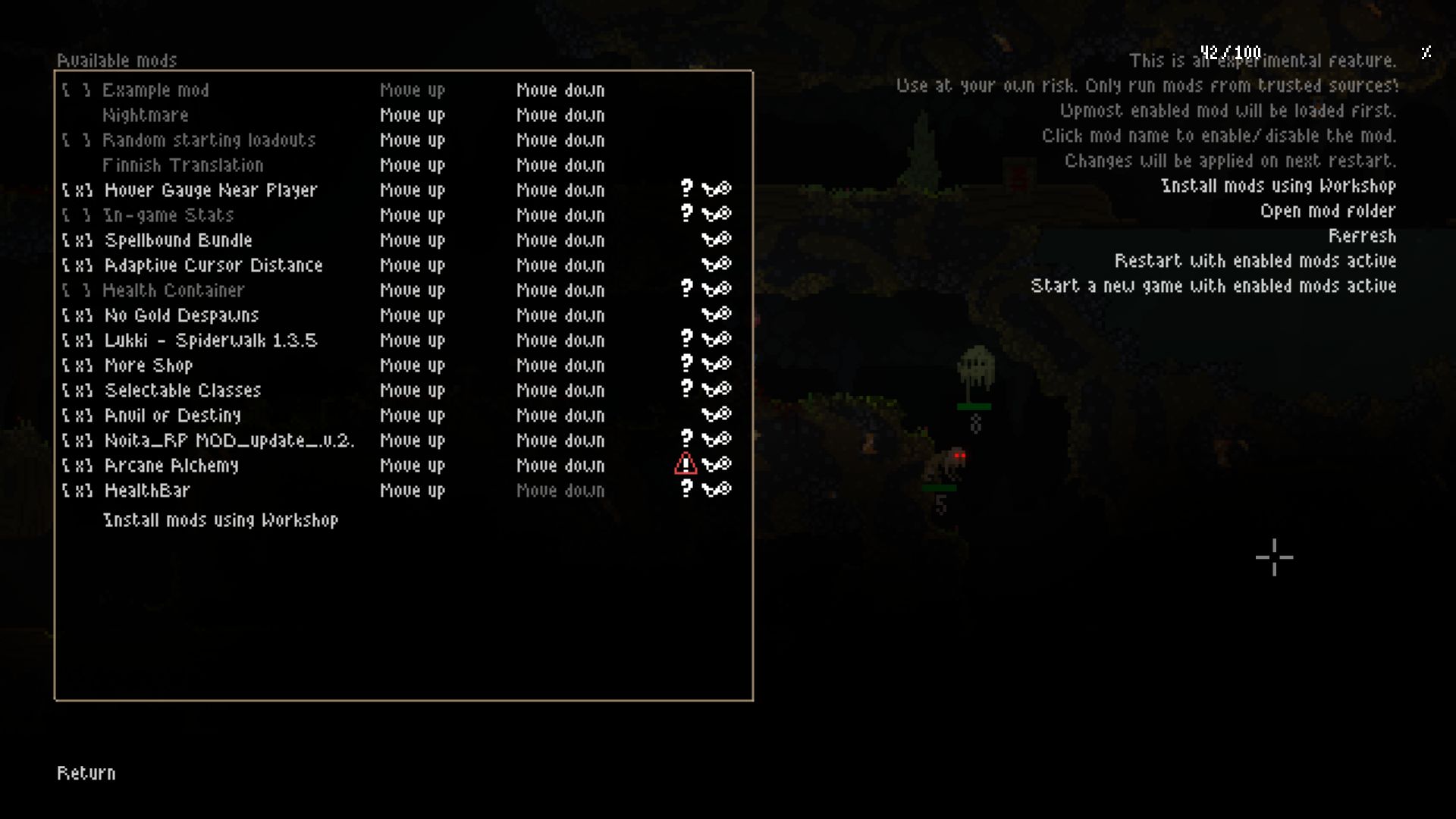 Welcome back to the chaos of Noita. It's the same game, so don't fear. There’s no protection against an errant gob of lava striking an explosive box and kickstarting a sequence where you’re transformed into a worm that angers the gods. As a matter of fact, that's more likely now. Let’s get blasphemous.

I’ll lead off with Arcane Alchemy. The potion crafting mod could be an alternative version of the main game. It crafts a number of bizarre effects from potions, letting you pour puddles of game-changing draughts.

If you splash a bottle of “Stop Hitting Yourself” around, anything that touches it will grow a limb that violently attacks its host. You can spray “Arborium” over anything to turn it into wood, making it easier to bypass. My favourite, “Dark Matter”, causes any creature that touches it to collapse in on itself.

Noita is a spectacular looking game. A lurid, splashy masterpiece that needs no help in looking amazing, but I’d still install Noita RP Mod. Its primary purpose is to polish particles, turning blasts of magic from the wand into swirling trails that light up the world.

It doesn’t do anything else. It just brings disco light to the fights, but that’s fine by me.

If Noita isn’t hard enough (you monster), or at least not enough of a roguelike for your tastes, this mod tweaks the lighting to make it more shadowy. Instead of seeing the whole screen lit up, you’ll only be able to see roughly where your wizard could see at that moment, with the rest of the level shrouded in a constantly shifting layer of shadow.

Not everything needs to be randomised. If you think about it, what are the chances that you, a wizard, would go spelunking without a smidge of preparation? Pretty low.

That’s where Selectable Classes comes into its own. Instead of wandering into a cave at the start of the game, you spawn in a house with the choice of 10 pre-rolled characters. The archetypes are all there: pyromancer, hunter, cryomancer. But my favourite is the spider-walking, tentacle snapping mutant. 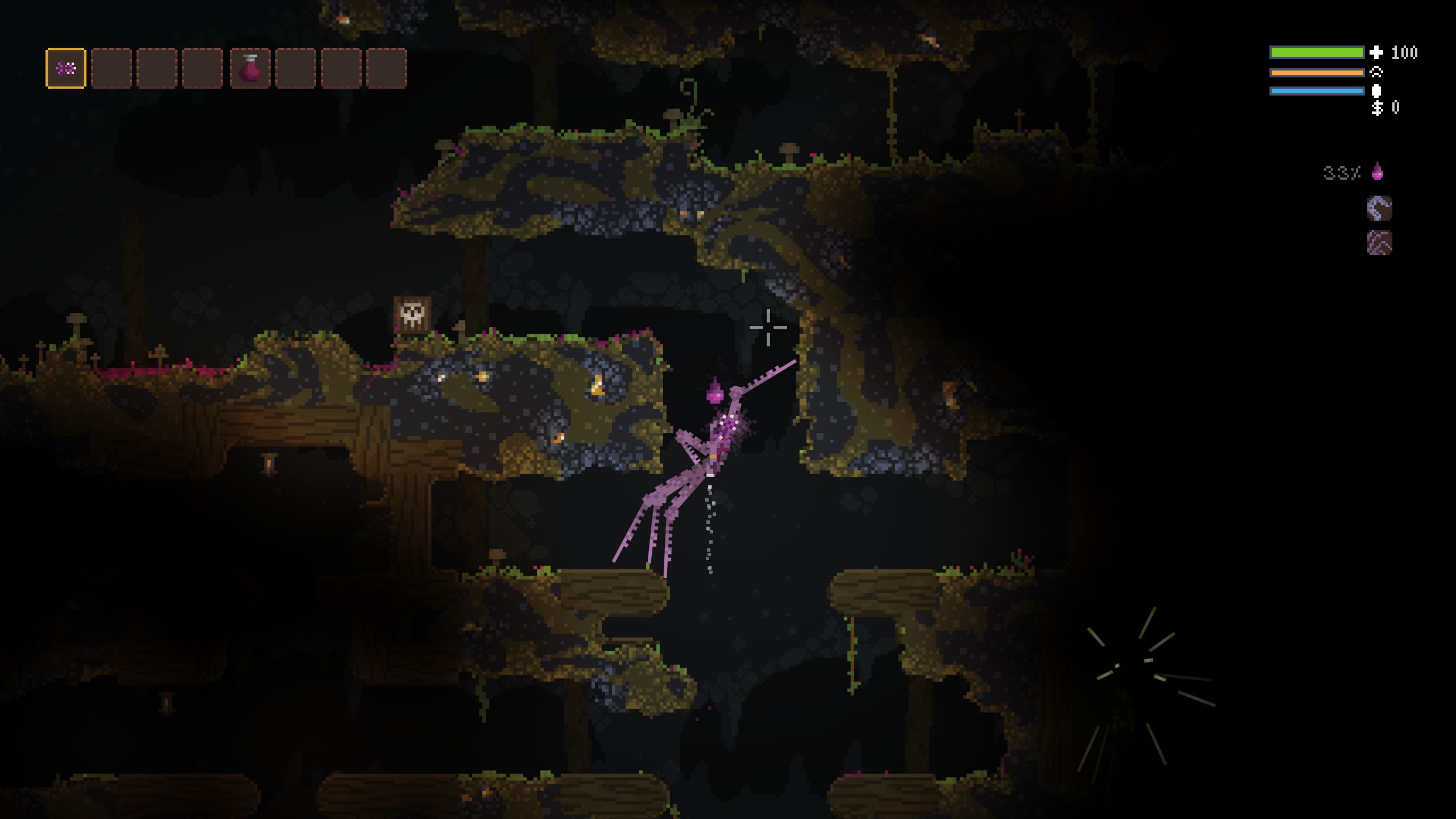 A simple tweak that changes the in-game shop. You now have six items in the two categories to select from. 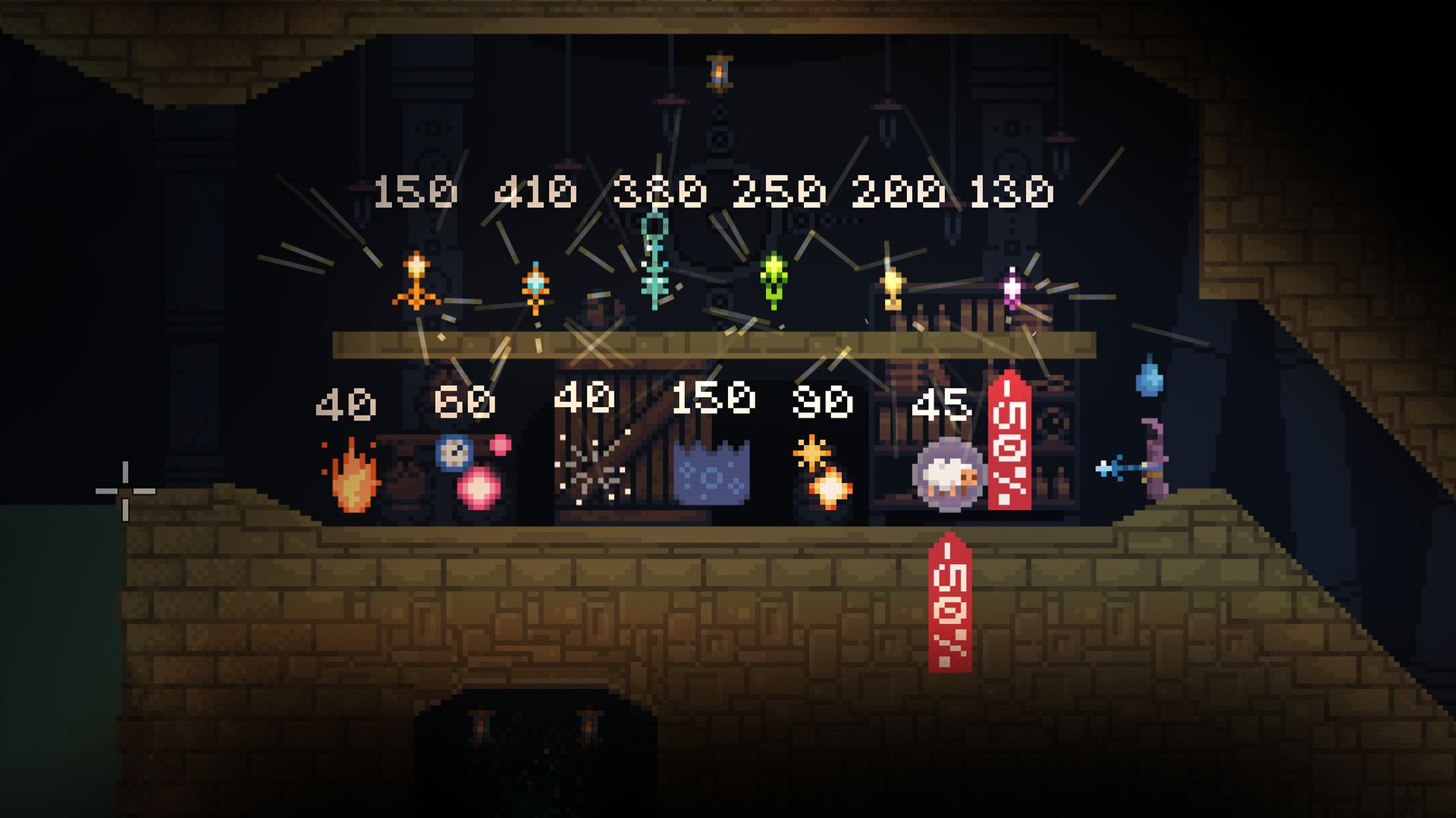 Though you spend a lot of time underground in Noita, weather can still have an effect. If you install the New Weathers mod, death rays will blast into the ground and earthquakes will shake loose the pixels.

There are natural effects, like a drought that saps the game of all the cleansing water (so you’d better avoid… well, everything), and sandstorms. There are wackier weathers, too: supernatural plagues of frogs and locusts, and worm rains that no-one asked for.

The 16 projectiles and two static projectiles would be enough to add this to any modding list, but it’s the 39 modifiers that are the real blessing of the Spellbound Bundle. Any one of these modifiers will alter your attack with interesting results. Here are a few:

Duck: This one attaches ducks to your spells to help them move, which helps them reduce their mana costs.

Trail of Rock Spirits: Those homing, explosive rock sprite things? This leaves behind a whole trail of them when you fire a spell.

Crumbling Shot: This will deteriorate the ground where your shot lands. So long, floor!

Anvil of Destiny by Horscht

A mod that fits the setting quite well. The Anvil of Destiny spawns in the game, waiting for a wand weary wizard to use its secret powers to alter their staff. The anvil allows players to combine wands from their inventory. You simply drop two from your stash onto the anvil and it’ll create a combined wand out of the pair, with improved stats. It’s a fun way to mix up your fighting style in the middle of a run.

The gold that dropped when you diced a bad guy with an electrified blade? You earned that gold! This mod means you’ll never have your hard-won gold despawned before you can grab it ever again. Unbalanced? Possibly. Fair? Yes. 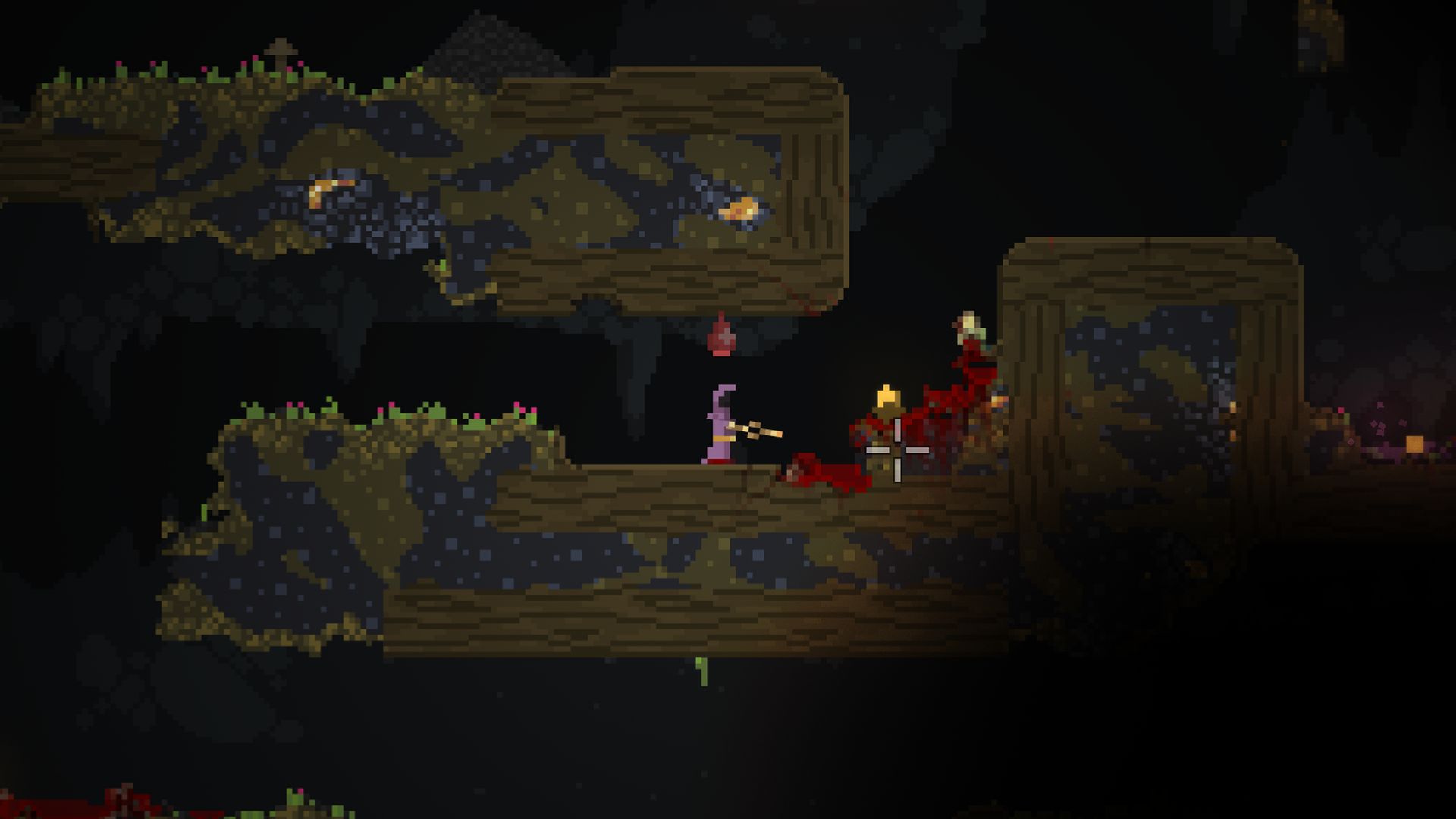 The smallest of tweaks that takes a lot of the guesswork out of your wizardly battles with Liekkiö’s and the like by adding a health bar to each enemy. 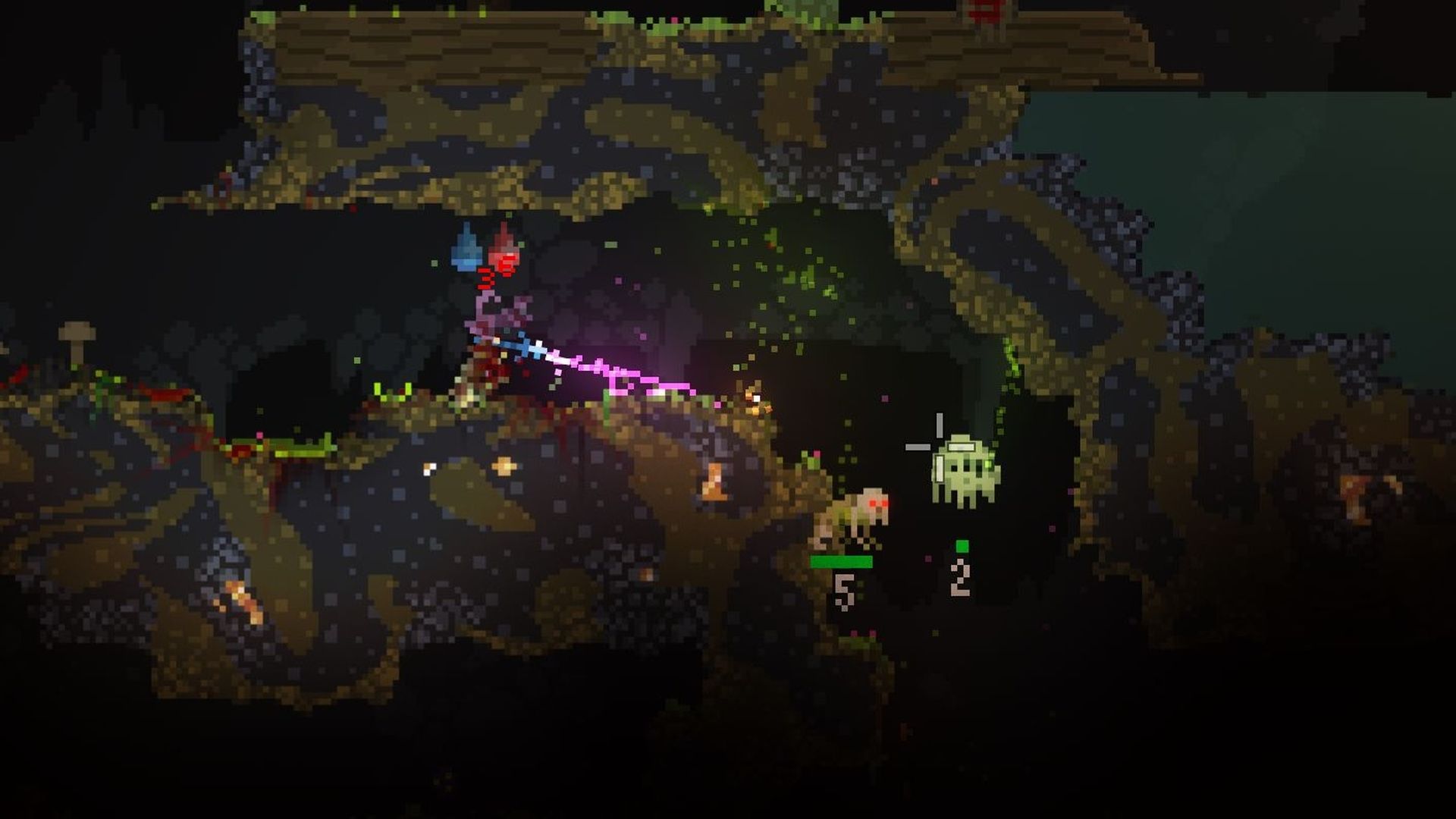 I play with the controller about 50% of the time and have longed for this tweak 100% of those sessions. It adjusts the pointer’s distance to the distance of the enemy you’re aiming at, which makes a surprisingly large difference with aiming accuracy. It doesn’t alter your aiming at all, just lets you see more easily where your shot is going to land. You still need the skill to pull it all off.

Hover Gauge Near Player by W00t

Another mod that sits squarely in my ‘sensible’ folder. Just a small UI tweak that moves the hover gauge to the back of the player, meaning you get to keep your eyes on your wizard when they’re at their most vulnerable. 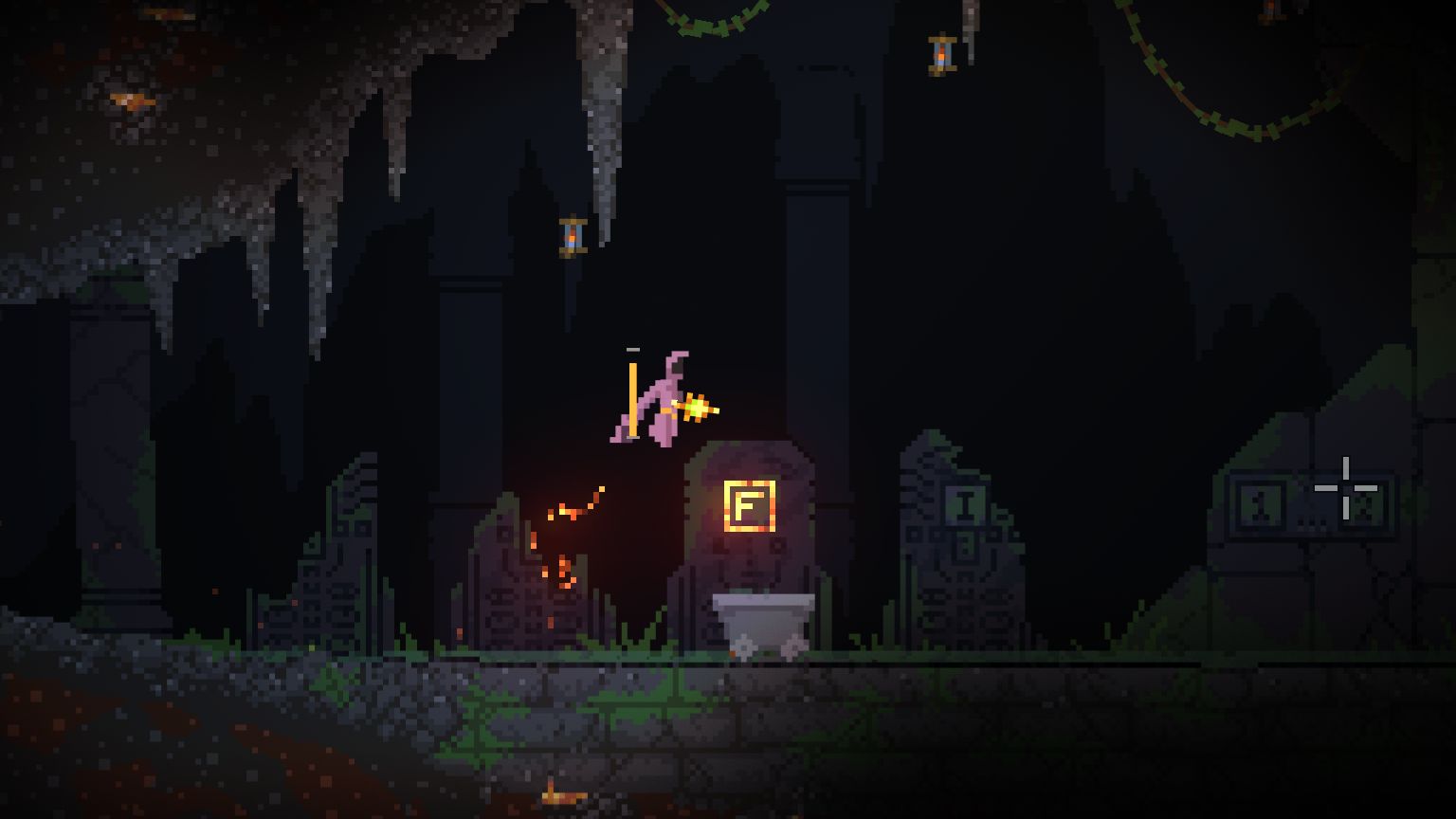