If you click on a link and make a purchase we may receive a small commission. Read our editorial policy.
Developer: Pendulo Studios, YS Interactive
Publisher: Microids

For reasons unclear to me, detective work seems to be a popular choice for enterprising animals keen to enter the gig economy. Indeed, creatures of all kinds have been sleuthing it up recently - just this year we had the pleasure of meeting a Goat Detective, a Frog Detective and a Raccoon Detective, and we heard about the arrival of the Chicken Police. And now it's time for Blacksad, a gruff detective cat who's hopped from his noir comic series to the PC screen, courtesy of Runaway developers Pendulo Studios.

We all know cats are lovable little shits, and Blacksad: Under the Skin is a little shit at first, too. The game opens with an angry rhino storming into your office, assaulting you, and hitting you with a barrage of quick-time events before you have a hope of understanding what the heck is going on. Fail to press the right button at the right time, and you die. Immediately. Snap, neck broken, press a button to retry. It's such a sudden, enraging start. But if you're not murdered by an ungulate in the game's opening seconds, you discover the rhino is in fact the unfaithful husband of your client, and is offering you a big stack of money to lie about his affair. It's a big decision, right out of the gate. 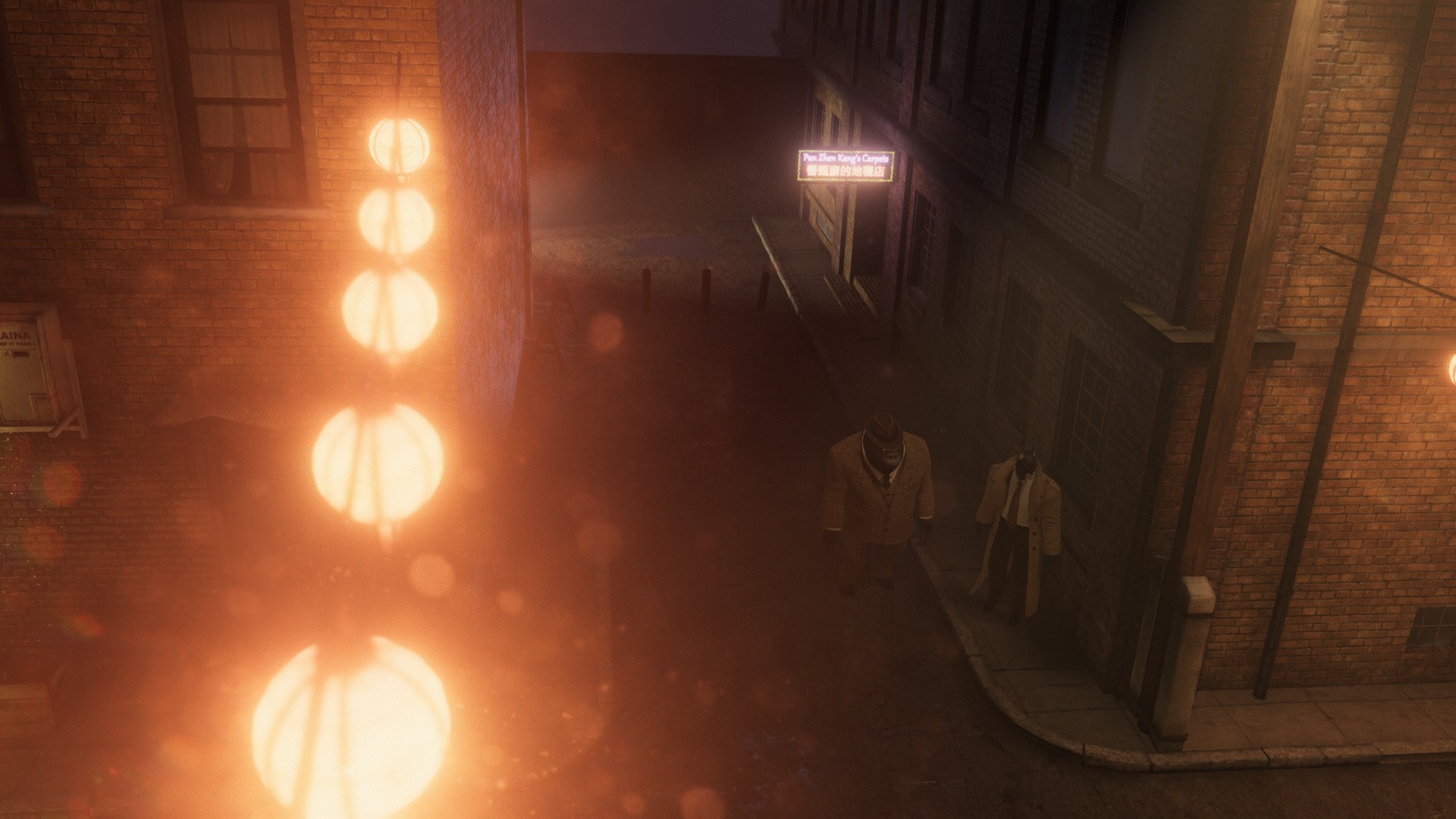 I didn't have the time to play the game more than once, as a playthrough takes around 20 hours, so I don't know how much of an impact your choice has on the rest of the story. But it felt like a big moral dilemma, and that's what matters. The game is littered with well-framed decisions like this, and takes track of your choices to paint a picture of your version of the character. You can be a hard-boiled, hard-hearted street bastard who trusts no one, or a kind soul, always ready to give suspects the benefit of the doubt.

But there's only so much you can choose. You will always be Blacksad, however: a feline iteration of the archetypal PI, hired by a damsel in distress to investigate the disappearance of a boxing star, who was the protégé of her father, until he took his own life. (Be warned - despite everyone being a fun animal, Blacksad deals with some fairly dark topics).

When you reach the scene of a crime, you're free to walk around gathering clues, though it's anything but an easy stroll. Unfortunately, I'm not referring to the game's difficulty here: walking genuinely seems like an exertion for poor old Blacksad, who may have the rough shape of a man in his prime, but lumbers around with the thudding footsteps of a chonky house cat.
Yup, this game features awkward tank controls: I thought we were finally free of their curse, and yet here we are. 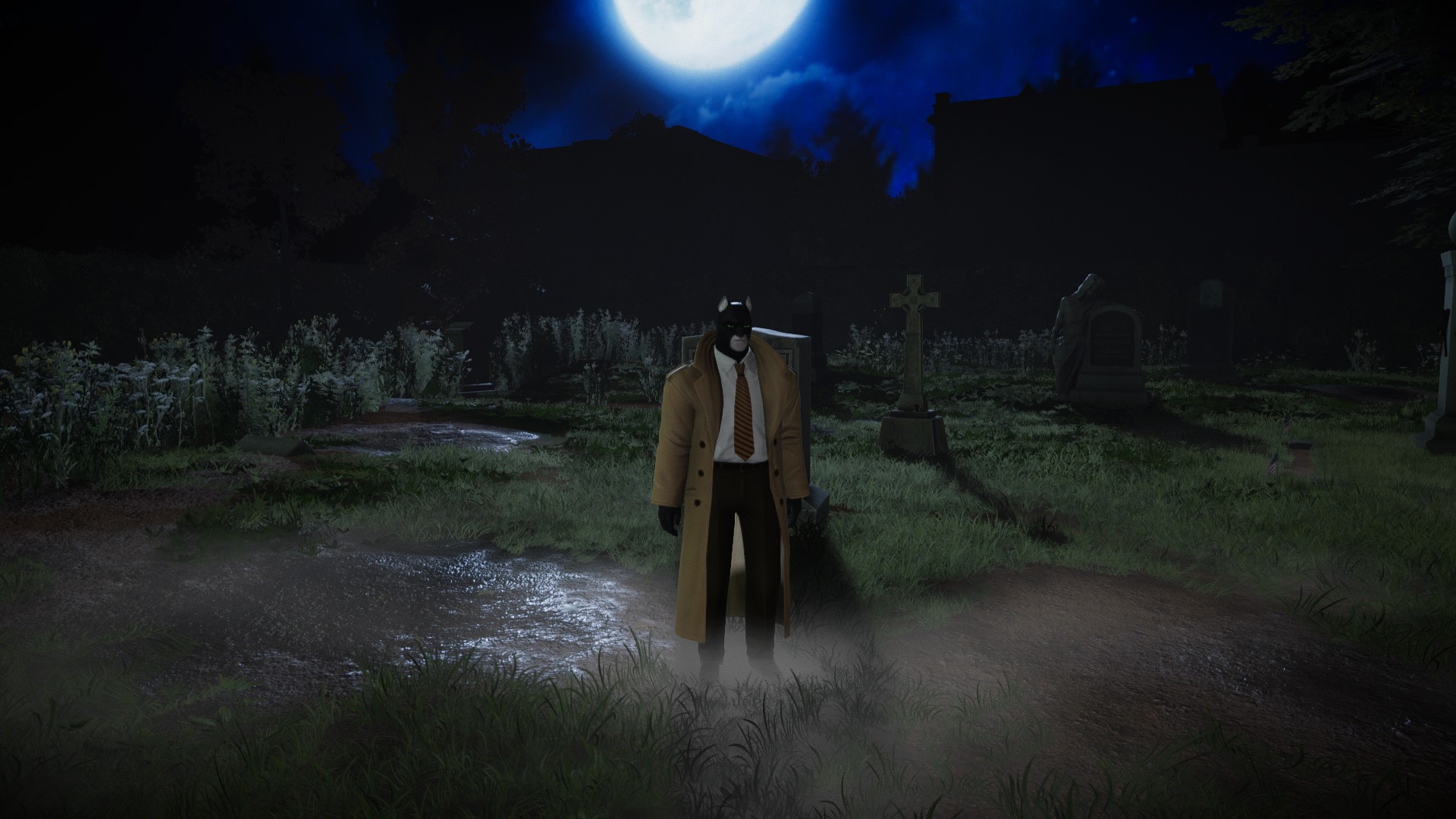 Other design decisions are much more welcome. Blacksad is mercifully free of the obscure inventory-related puzzles that often plague adventure games. Instead of collecting items, you sniff around gathering clues, and then use the power of basic logic to connect them and unlock new opportunities. Yes, you actually use your real life mind for deduction! You might notice a footprint near a crime scene, for example, and later spot a pair of shoes in the room of a suspicious character. Open your mind, connect the dots, and let Blacksad realize there might be a link. It's a simple, but very neat system, and makes sure you and your cat detective are always on the same page.

The game also strikes a nice balance between exploratory sections, where you interrogate people and gather clues, and cinematic sequences full of dialogues and QTEs. The story is largely linear, but you do get some leeway about how you go about reaching certain conclusions (It even features a handy comics summary of the plot, in case you get lost! More of this in games, please.) 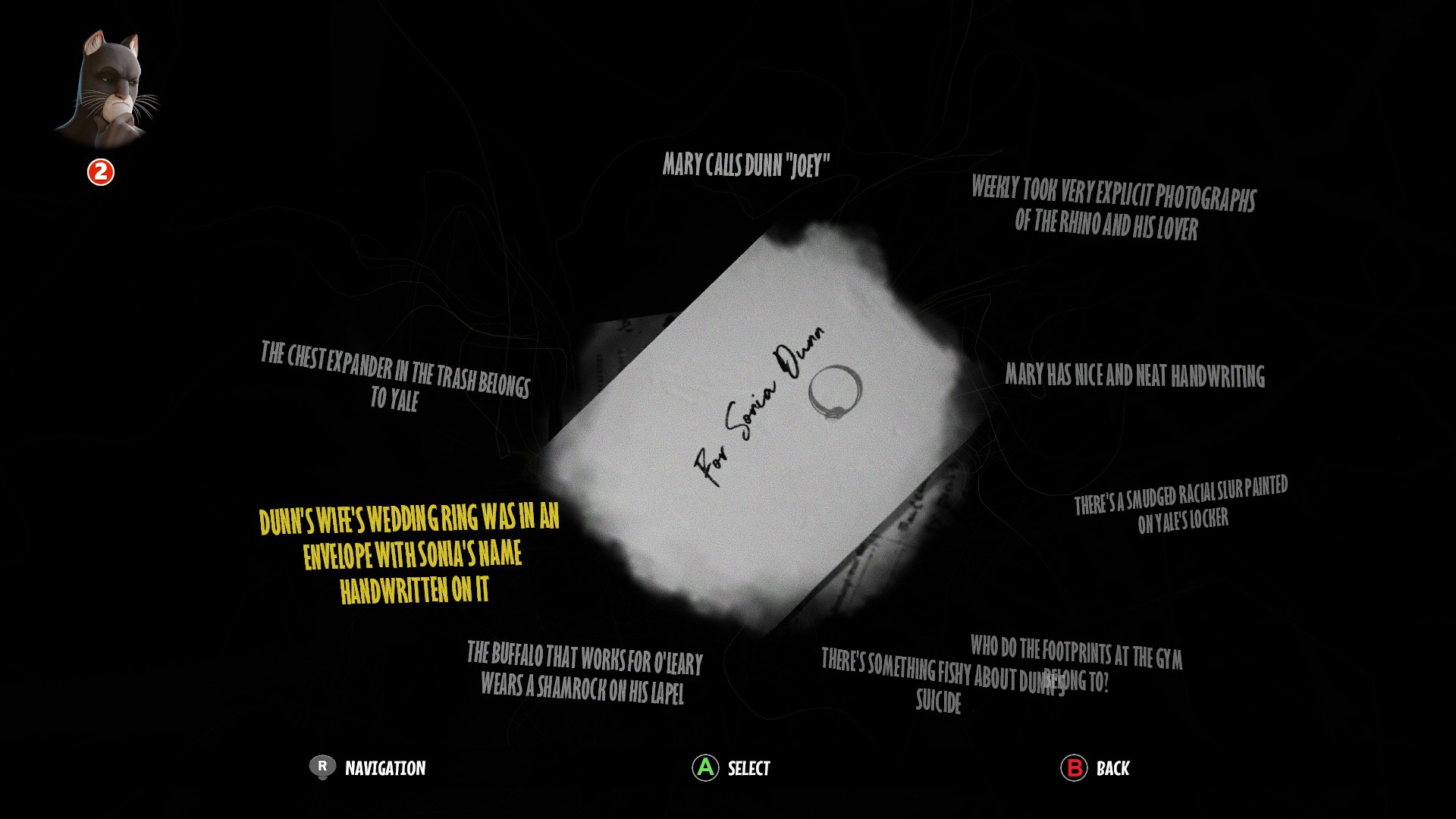 When it all works, it works beautifully. I particularly enjoyed a sequence where I had to impersonate a criminal in order to play poker with a bunch of crooks, in a dingy room that was all dim lights and cigarette smoke. At one point during the game, another player asked me about our common friend Kenny. I got a dialogue option called "try to remember", at which point things jumped suddenly to the night before — when I was out drinking with the person I was now impersonating. I explored the room in the flashback, found a clue about Kenny, and jumped back to present to deliver that info with a confident grin. Brilliant.

Still, even this didn't come off flawlessly. I was forced to replay the sequence over and over because I kept failing a quick-time event, or because Blacksad just didn't want to move in front of the wardrobe I wanted to open, and the repetition worked against the conceit of the flashback - after all, how can you fail at something you've already done?

And that's where we get to it: Blacksad is often just slightly too clunky to be fun. Movements are awkward. There are no tutorial prompts. The journal is useful, but flipping through the pages is a slow chore. Most importantly, the game loves to dangle important moral choices in front of you, only to punish you with an instant game over if you pick the 'wrong' answer. It feels unfair, and makes me wonder if my past choices - rhino hush money and all the rest - actually mattered at all.

All this won't be a deal-breaker to adventure game aficionados, as it's often part of the territory, but it saddens me. This is a game that, with just a little more polish, could have been a good starting point for people who don't usually play adventure games - or even games at all - but might have read Blacksad.

I wrote an entire other article about the difficulties in adapting the beloved Spanish comic series for the screen, and it's interesting to see the end result of the process. The comic's main selling point is the fact that it's incredibly pretty: a triumph of watercolor as easy to love as it is difficult to replicate. Pendulo Studios opted for a semi-realistic approach in their adaptation, with mixed results.

All the animals in the game are absolutely gorgeous. Well, mostly. I remain deeply bothered by the way Juanjo Guarnido draws women, and his designs reach a level of uncanniness comparable to the Cats movie once transposed to 3D. Please observe this crucial piece of evidence: 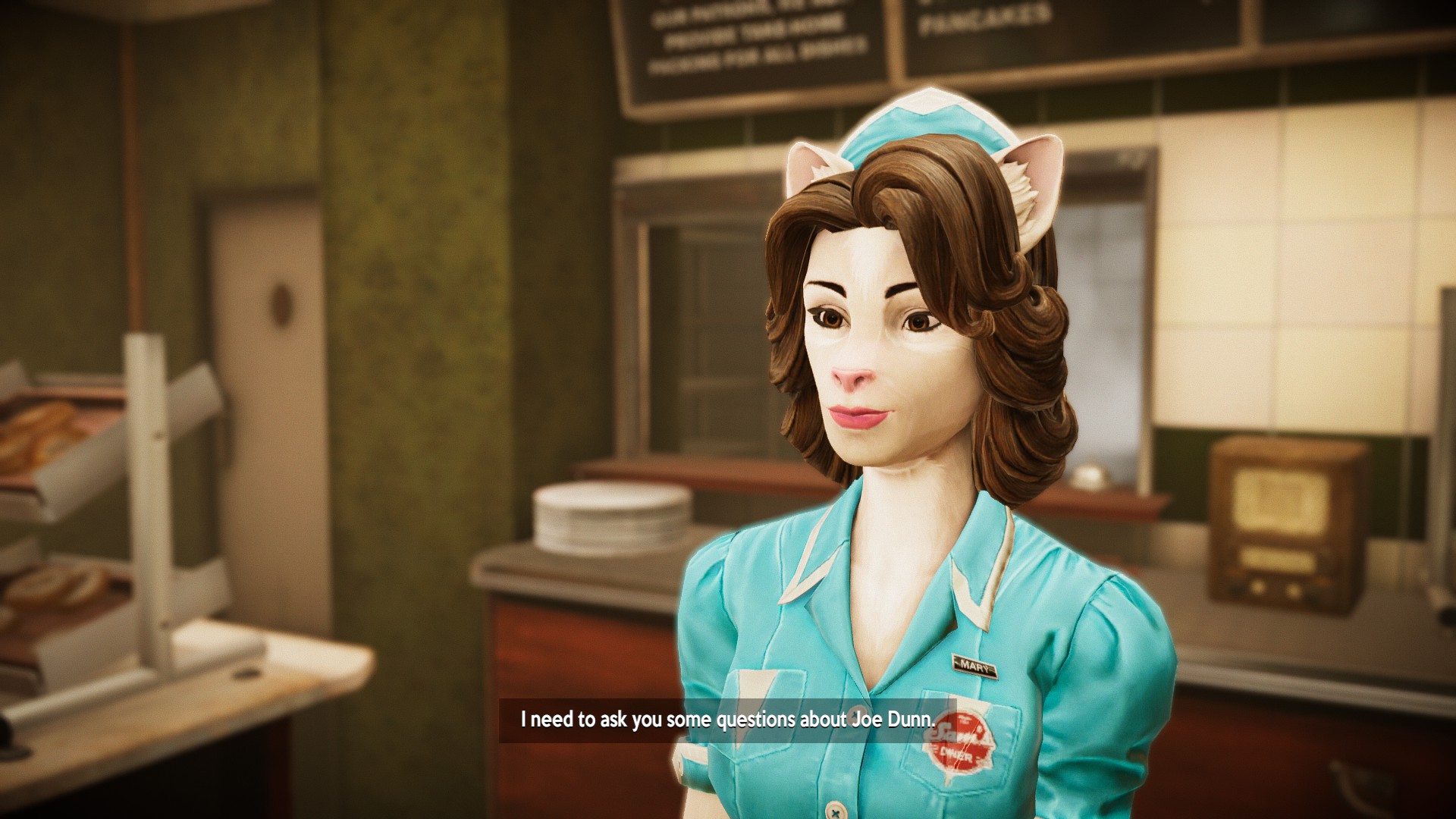 So, OK, almost all the animals look gorgeous. Until they start moving, that is. The animations are stiff and constrained, a far cry from the wonderfully lively animals that populate the comic, and this is especially notable during conversations, where animals move their mouths with the flapping emptiness of a low-budget anime series.

There's only so much I can criticise all this, however. Blacksad clearly didn't have the budget Pendulo wanted it to have, and you can really see how hard they've worked to close the gap.
It shows in the care put into every small detail of the world: Blacksad's office might not have great textures, but it's such a careful replica of its comics counterpart, that even the knick-knacks on the shelves are the same. There are so many small touches of fidelity like this, and it extends to the story too, which has optional vignettes hidden all over the place to stumble into. I bought a hamburger for a war veteran and listened to his stories. I called my sister and chatted with my niece.

It all gave me a great sense of the world Blacksad inhabits, making it feel way roomier than the story being told in it, but never empty. And I like this version of the cat detective, more humorous and more self-aware than his comic counterpart. But despite the game's claim to be set in the comic continuity, something feels off to me. 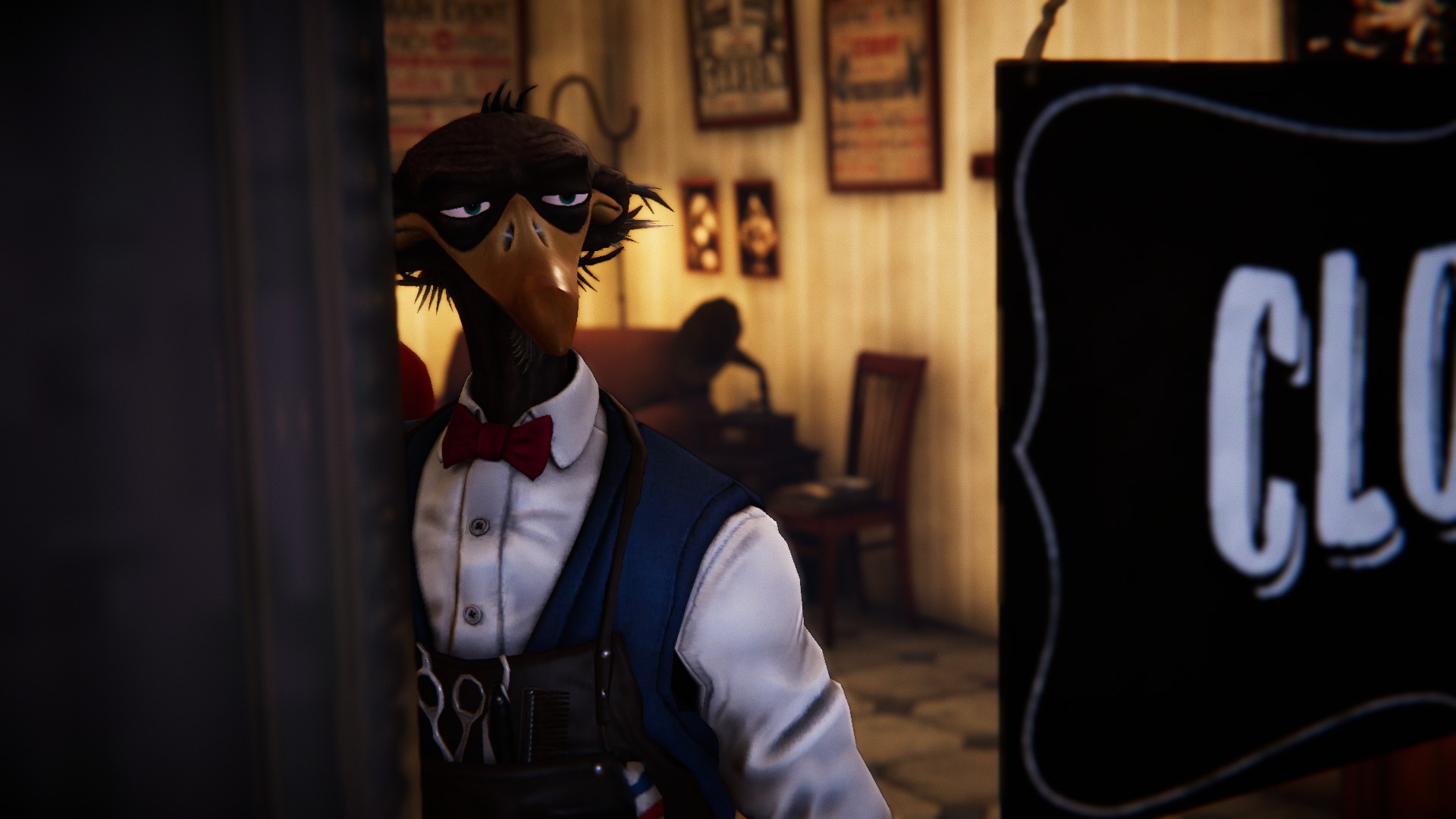 The comics might feature talking animals, but they're not at all about being a talking animal. The characters are just people, represented visually by animals who match their personalities. You could argue they're not really animals at all - certainly, their animal characteristics never play a part in the action, so far as I'm aware.

The game, on the other hand, makes very clear that this is an alternate America where everyone is a talking animal, like a grittier take on Zootropolis. You being a literal cat is an important point, because sometimes you can activate your cat senses and use your feline powers to notice details during conversations. You could activate your cat-o-vision to notice a symbol on a cigarette case, for example, and then ask a question about it.

I am not sure how I feel about this. It makes sense as a mechanic, and yet it makes the whole story less convincing at times — like when the game tries talking about racism. Discussions about race (aka fur color) just... don't make a lot of sense, after so much time spent talking about distrust between species. Metaphors get muddled.

But for the most part, this is just me being pedantic. Overall, despite all the frustrations, I enjoyed being a broody detective cat. I just wish the game itself was as strong as the story it was trying to tell. 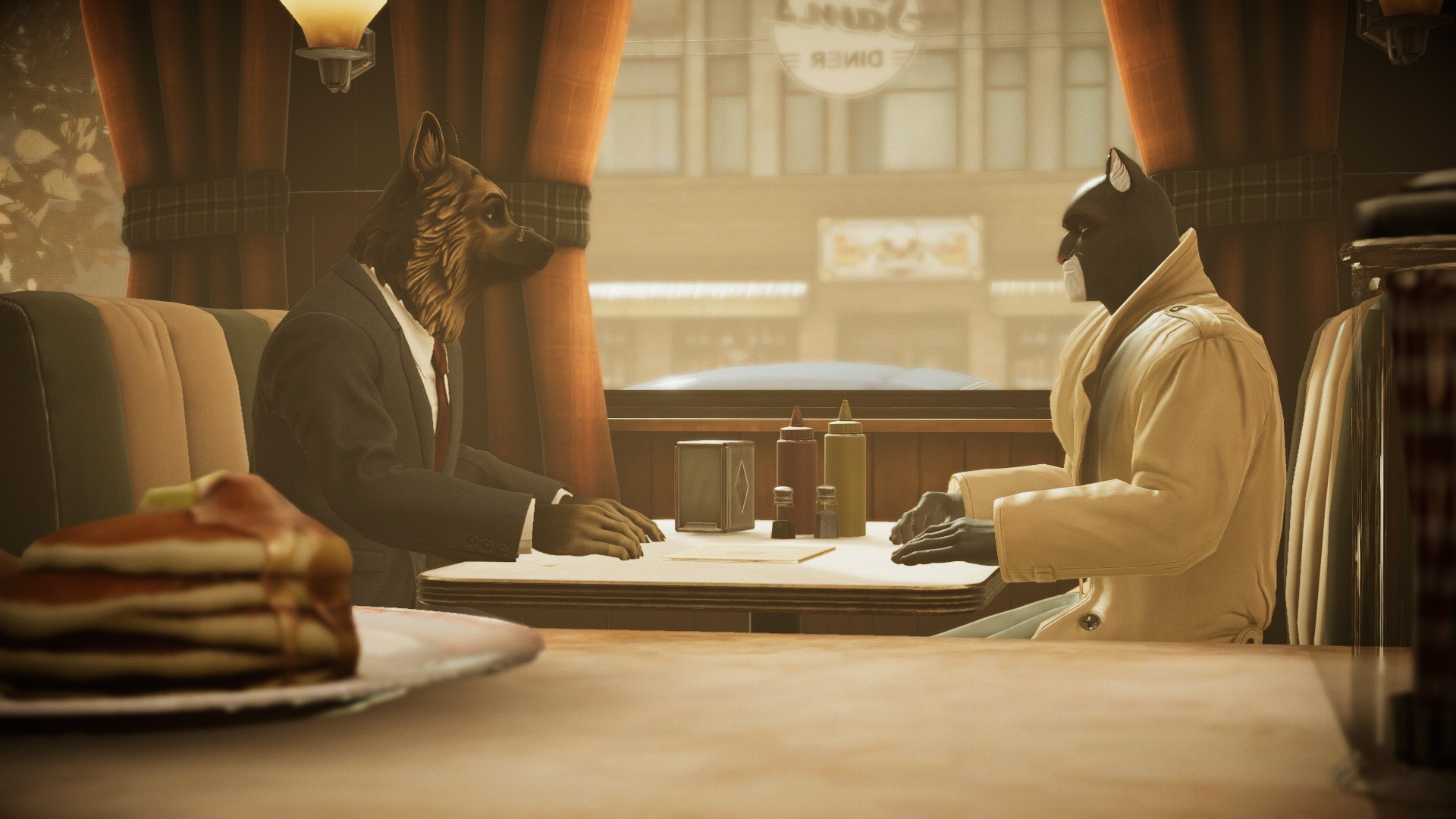 Blacksad: Under the Skin is now available on Steam.