If you click on a link and make a purchase we may receive a small commission. Read our editorial policy.
Developer: ArtPlay
Publisher: 505 Games

I’ve put in dozens of hours into as many Metroidvania games at this point, and whenever I play them I get anxious. Mostly about getting hopelessly lost, failing to circle back for something important, or forgetting the extensive and mostly unspoken rules the genre has developed over its history. After playing Bloodstained: Ritual Of The Night, I think I’m starting to properly get the appeal.

If you're not au fait with decades old portmanteaus, Metroidvania is derived from smashing together Metroid and Castlevania, the two series that defined this action-adventurey subgenre. If a game’s progression is tied to exploring and backtracking through an interconnected map, and finding new abilities to unlock even more areas to explore and backtrack through, it probably falls into this category.

My enhanced enjoyment of this Metroidvania in particular may have something to do with its development being led by Koji “Iga” Igarashi, a 10-year veteran of the Castlevania series who worked on what many deem it's greatest entry, Symphony of the Night. At the very least, fans loved his work enough to fork over more than $5.5 million on Kickstarter so Igarashi could make Bloodstained, a spiritual successor. 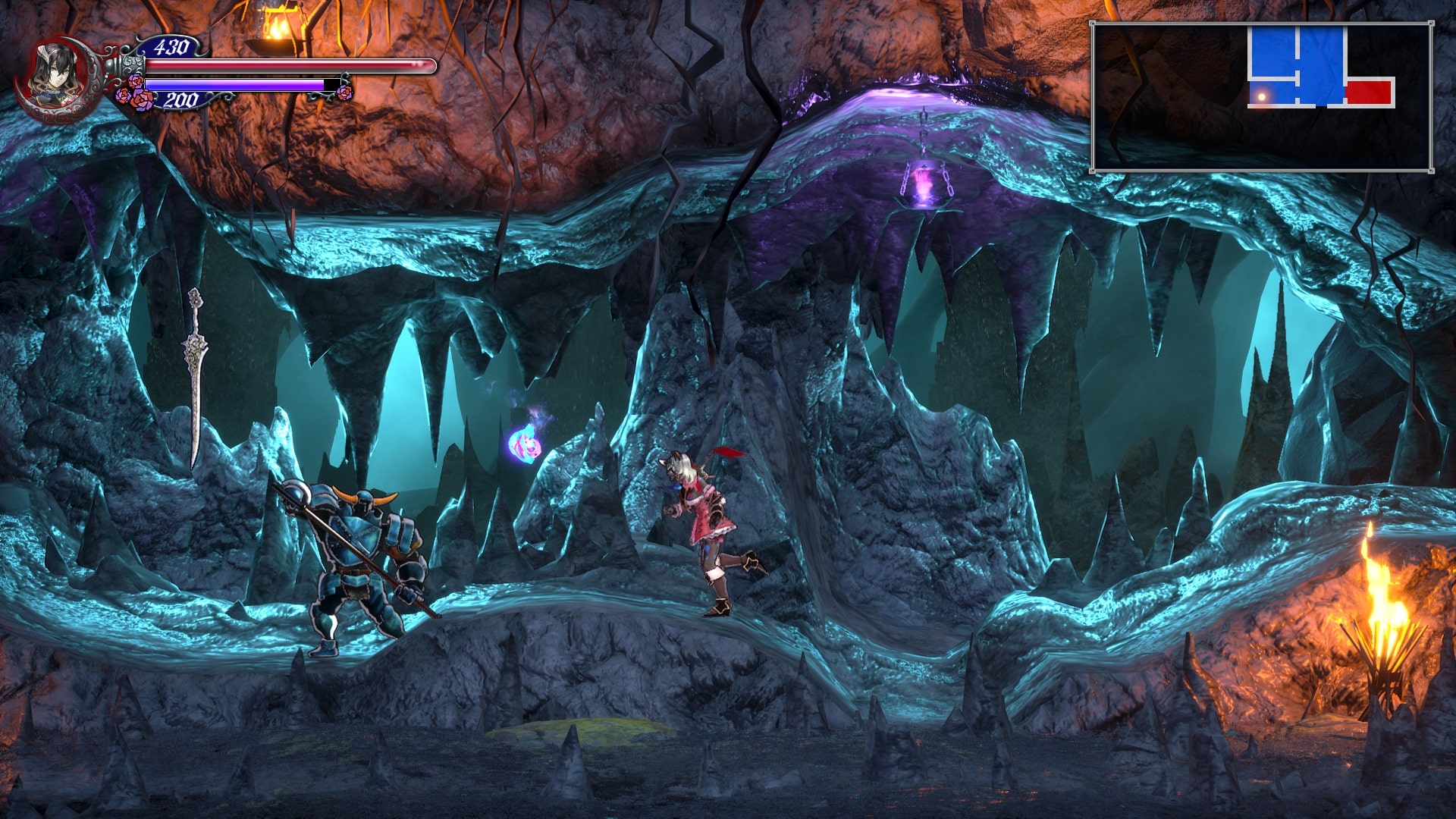 In what’s practically a Castlevania trademark, Bloodstained takes place in a demon-infested Industrial Age Europe, so there’s plenty of steampunk flair. The story excuse for all the hacking and slashing is that ten years ago, a group of alchemists tried to summon demons by sacrificing people fused with demonic crystals, a.k.a. Shardbringers. A bungled attempt saw the world nearly overrun with hellions, and now one of the two surviving Shardbringers, Gebel, wants revenge. He’s summoned a demon army and one labyrinth of a castle that you, Miriam, and coincidentally the other surviving Shardbringer, must make your way through. The ultimate goal is to find and defeat Gebel.

While its name is painfully unimaginative -- Hellhold? Really, Gebel? -- I thoroughly enjoyed how many different environments developer ArtPlay manages to squeeze into it. At one point I spent nearly an hour wandering through a cave system miles below ground, while at another I took a turn and thought I'd entered a completely different castle, all the creepy dark hallways replaced by dazzling gold flourishes. Thanks to this diversity, even with all the backtracking and crisscrossing this style of game requires, I never got tired of exploring Hellhold. 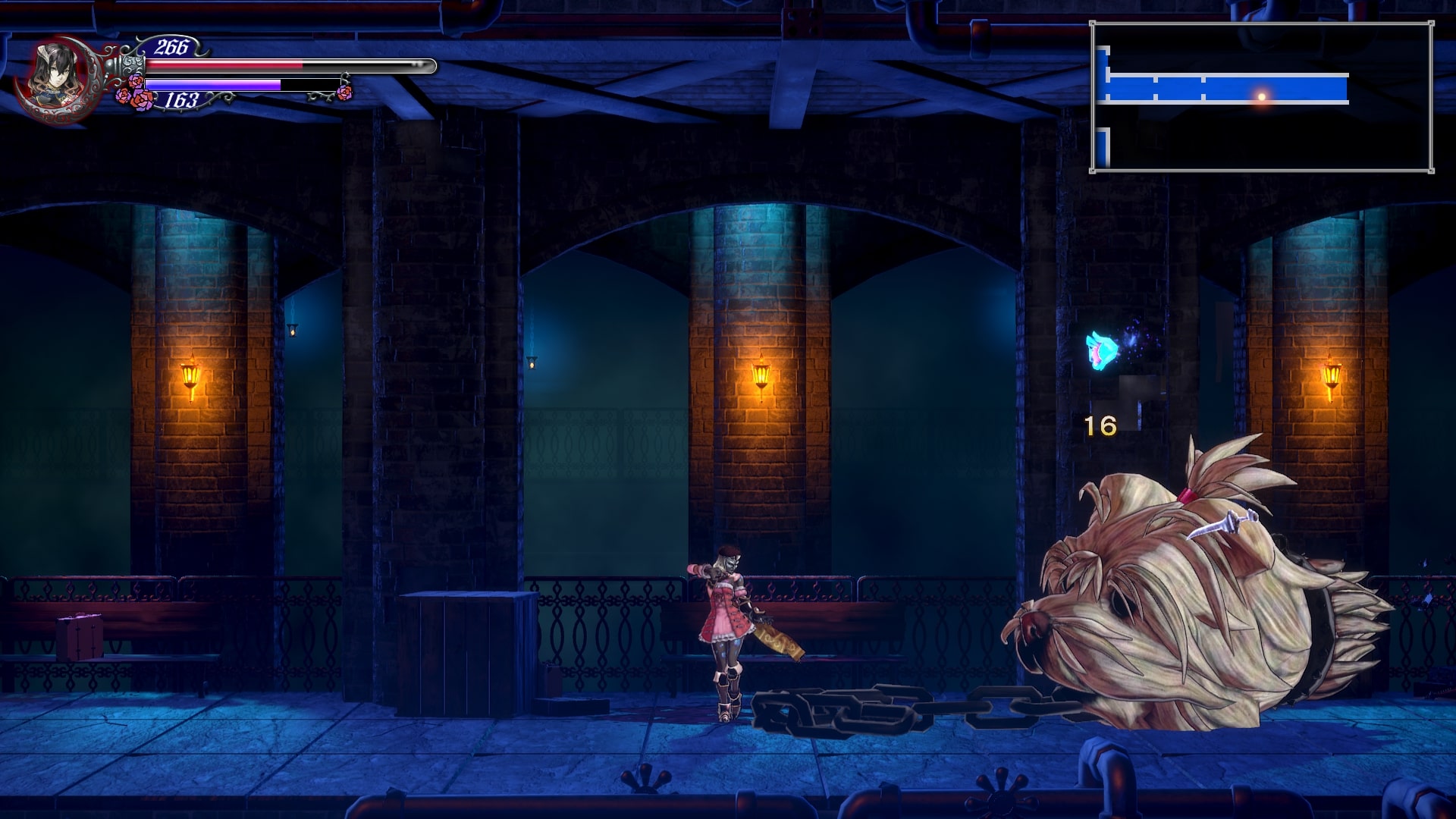 These different stylings also help make Bloodstained’s larger-than-life boss battles that much more memorable. Some of my favourites, like a huge coal-powered golem fought on a speeding train, or a two-headed dragon who terrorises you along a tower’s stairway, feel more like choreographed cutscenes than encounters. Some bosses became decidedly less lovely after the fifth or sixth attempt, but as far as required grinding goes, Bloodstained isn’t the worst offender I’ve come across. Doesn’t make the difficulty curve feel any less like hitting a brick wall, though.

I was similarly frustrated with Bloodstained’s requirements for its multiple endings (though a similar complaint can be levelled at many Metroidvanias). Unlocking anything other than Bloodstained’s worst possible ending -- which is what I got, in case the salt isn’t obvious -- requires, among other tasks, chancing upon a shard dropped at random from an otherwise unremarkable enemy. Extra bosses and difficult challenges are one thing, but needlessly obtuse obstacles are another. 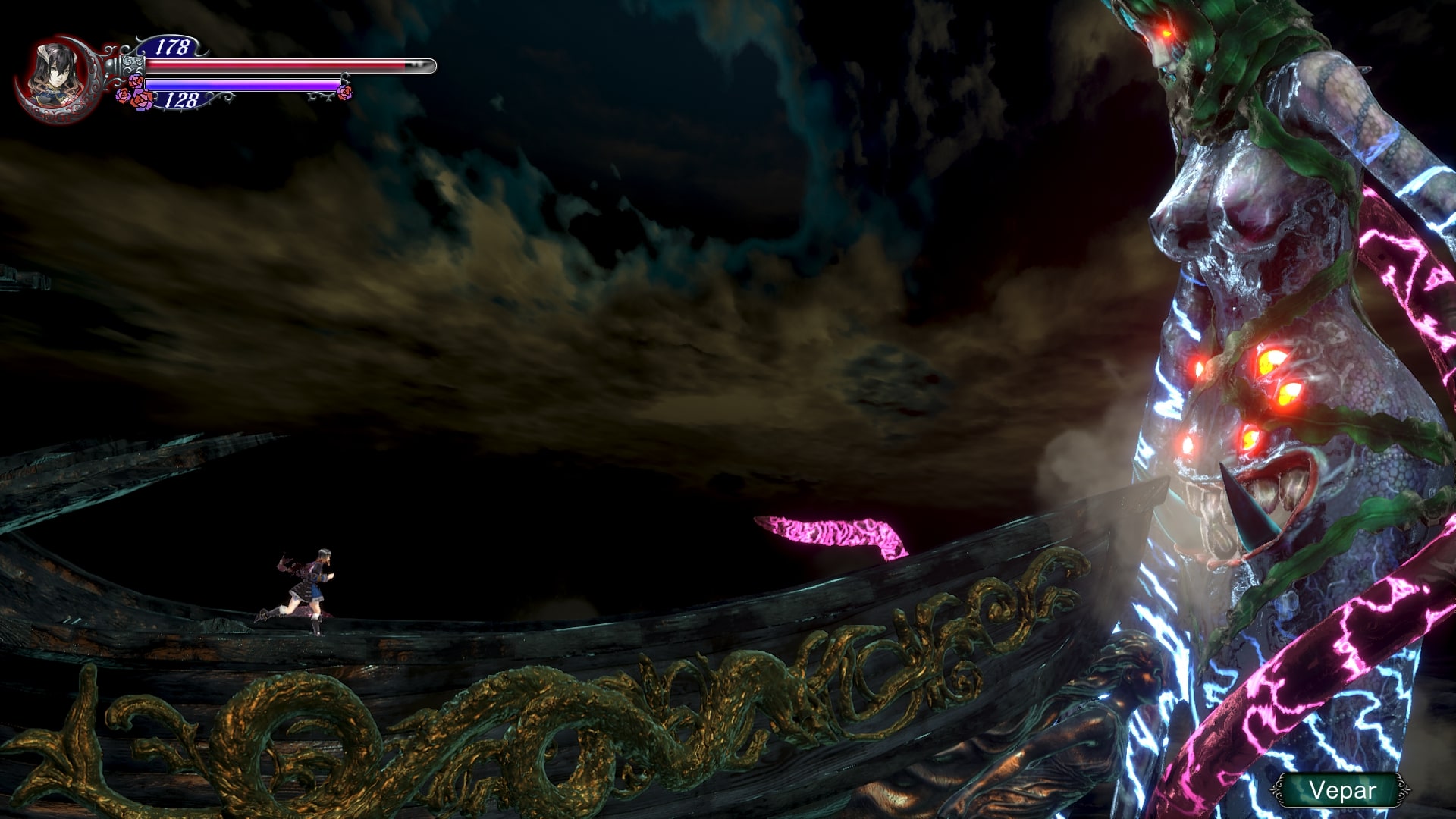 Far more entertaining is Bloodstained’s wide variety of hellspawn, and all the ways to send them back there crying. Weapons like greatswords, lances, and whips work great if you prefer some space to manoeuvre, whereas daggers and clubs do the job up close and personal. You can get even closer with martial arts, for when you want to literally kick the crap out of a demon.

All of these options work and feel great except, unfortunately, for the guns. While regular ammo is infinite, those bullets might as well be peas for how little damage they do. Any ammo actually capable of making a dent has to be found or bought, and ultimately isn't worth the bother. In the same time it takes to equip bullets, line up a shot and fire, you can land multiple blows with a melee weapon.

Hacking through enemies nets you the usual experience and loot you’d expect, but each one also has a chance of dropping its own unique shard, which you can absorb to inherit powers like flailing tentacles or fiery breath as a new attack. Miriam can also equip multiple of these for skills like passive boosts, directional attacks, conjuring spells, and summoning familiars (such as Becky, the name I gave my living sword that was prone to very angry outbursts). Certain shards are laughable, though, whether intentional or not, like the ability to summon a single toad, or one that transforms Miriam into the demon equivalent of a Playboy Bunny. Still, I had a lot of fun mixing and matching the different options to tailor how I dealt with enemies. 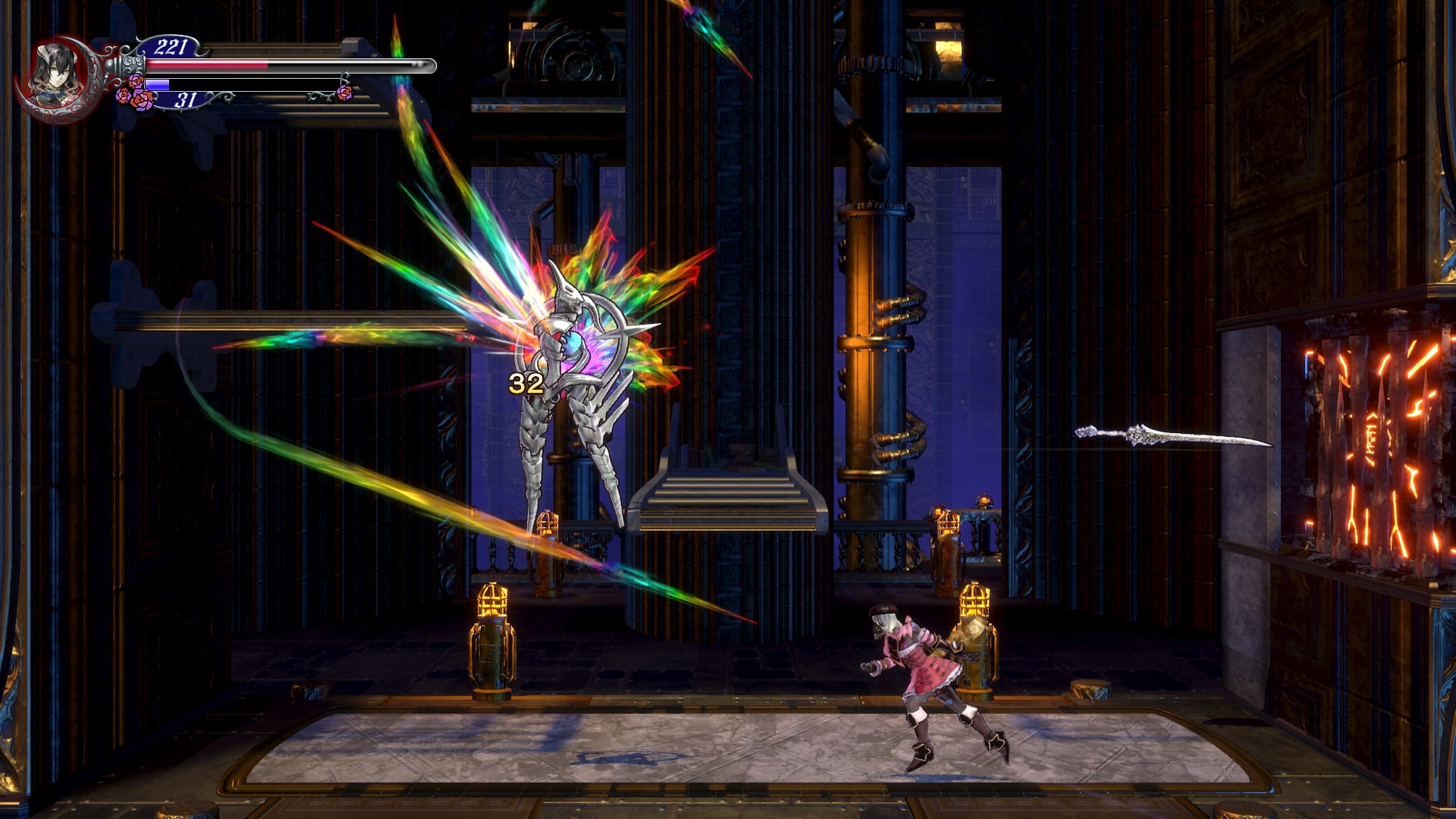 Similarly enjoyable is how you can look absolutely ridiculous while dishing out demonic justice, thanks to a few RPG elements Bloodstained slips in. Just about any accessory you can equip appears on screen on Miriam, so I spent most of the game traipsing around in a Santa hat and a fake mustachioed nose. You can also customise her skin, armor, and hair color, with additional styles for the latter unlocked through playing. Usually, I’m bored to tears by the idea of mowing down the same batch of enemies over and over again for a rare weapon or material drop, but add in the chance to snag a new bomb-ass hairstyle and I’ll grind with the best of them.

I’m still not sure if Bloodstained has made a dyed in the wool Metroidvania fan out of me, but it’s certainly the most fun I’ve had playing one in a while. Even if I am still salty about that ending, and learning the super-specific requirements, I didn't immediately throw up my hands. In fact, it feels more like an excuse to try out more attack combinations, zip around the lovely areas, and hopefully find a new hairstyle that makes Miriam look even more like an anime magical girl.