A third tenkeyless gaming keyboard in a week? Well, I never. This time, it's Bloody Gaming's B930, which uses optical RGB switches not unlike the Razer Huntsman for even nippier keystrokes and reduced latency. Unfortunately, Razer's Huntsman could probably scoff the B930 down in a single gulp, for this is definitely not best gaming keyboard material.

I'll be upfront, the Bloody Gaming B930 really wasn't my cup of tea. Considering it costs £130 / $140, I was really expecting a much higher level of build quality than what arrived on my testing bench. Made almost entirely from plastic, the silver trim and exterior corner screws just look a bit tacky and try-hard if you ask me, and the flared corners coupled with a different coloured RGB on every single row of the keyboard just made me grimace every time I looked at it.

Even worse, this keyboard is so rattly! Each and every keycap wobbles from side to side as you move your fingers over them, and the space bar emits a worrying mechanical whine every time it bounces up and down - so much so that I can always hear it over the rest of its CLACKY CLACKs. It feels like it's going to break every time I use it, like pressing down too hard will suddenly dislodge something, and it makes me long for the infinitely better built (not to mention a third of the price) Tecware Phantom RGB I reviewed last week. 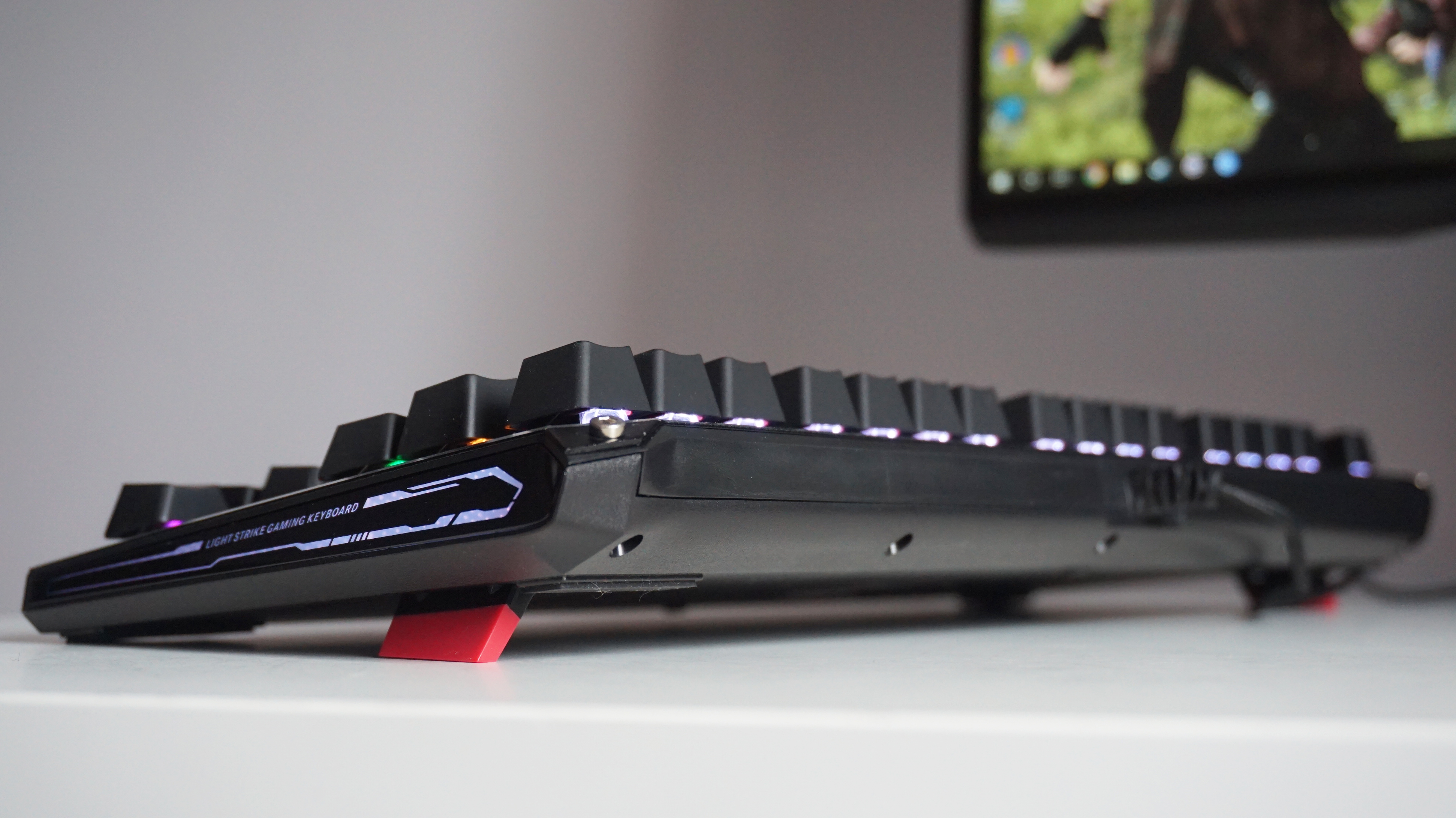 To its credit, the B390 isn't actually that bad to type on. The keys themselves are well-spaced and I was able to get up to full typing speed almost instantly. I rarely found myself making any mistakes and there was enough tactile feedback to make writing long word documents on it (including this review) an absolute breeze.

Likewise, contrary to the amount of wobble going on, each key cap is, in fact, quite firmly attached to its respective switch. The B390 comes with eight replacement caps for the WASD and ERFG keys, for example, and when I tried to remove them with the bundled key cap puller, I had quite a tough time actually getting any of them off. I suspect a large part of that might actually be down to the rather ineffectual design of said key cap puller, as the close spacing between the keys didn't really leave a lot of room to get in underneath them, but it's clear they're not going to suddenly fall off after a prolonged typing session.

Bizarrely, the Light Strike Libra switches used by the B930 have a completely different colour scheme to your usual crop of Cherry MX switches, so the brown ones on my review sample are actually described as being 'linear and smooth', while the orange version is 'tactile and clicky'. Generally, brown switches are often the tactile, clicky types, offering a little bump about halfway down a key press to enhance the sensation of tactile feedback, but not here. Instead, these brown switches go straight up and down like your typical Cherry MX red switch.

Only here, Bloody's Libra switches claim a maximum latency of 0.2ms compared to Cherry's 30ms, technically making them a lot quicker and faster for playing games. They also claim a 100 million keystroke lifespan over Cherry's 60 million, as well as water resistance and reinforced stabilisation. That may well be true, but the thing is I just don't believe it - not when the keys make such a racket and jiggle about so easily at the merest brush of a finger.

The B390 also doesn't come with any of the features I'd expect from such an expensive keyboard, either. There's no USB passthrough, for instance, and the interface of its Key Dominator software is so archaic that I found it almost impossible to use, whether it was changing the layout, recording macros or adjusting the RGB lighting.

Plus, why spend £130 / $140 on a keyboard like this, where you're constantly worrying about the state and sound of its keys, when you could spend the same amount of money on the infinitely superior Roccat Vulcan? There's just no reason to pick the Bloody B390 when the Vulcan or even the cheaper Fnatic Streak exists (the latter of which is also available as the tenkeyless miniStreak for just £90 / $90), so do yourself a favour and get one of those instead. You'll thank yourself for it later.