If you've been playing Borderlands 3 over the past couple of weeks, you'll no doubt have come across hundreds, if not thousands, of its supposed billion different gun types. Indeed, so far I've seen shotguns that can fire tiny little turrets on legs, rifles that turn into bouncy grenades once I've emptied the magazine, and sniper rifles whose bullets magically boomerang back into my ammo reserves if they hit a shield.

They also come in all sorts of outlandish shapes and sizes and have ludicrous names, from the red and silver jaws of my Super Ten Gallon to the rainbow-coloured eyesore that is my Kemik Dayummed Skeksil. Their designs are so out there, in fact, that if you squint a bit, they aren't actually that dissimilar from some of today's best graphics cards - and until some poor soul eventually catalogues all billion of those Borderlands 3 weapons, who's to say that some of them aren't modelled on actual graphics cards? Because to be honest, if I saw the seven GPUs I've listed below turn up as legit Borderlands 3 weapons, I wouldn't bat an eyelid.

Let's start with that one up the top there, the PowerColor Radeon RX 590 Red Devil. It's big, bold, has a hot red and black colour scheme and almost certainly has the following weapon stats: 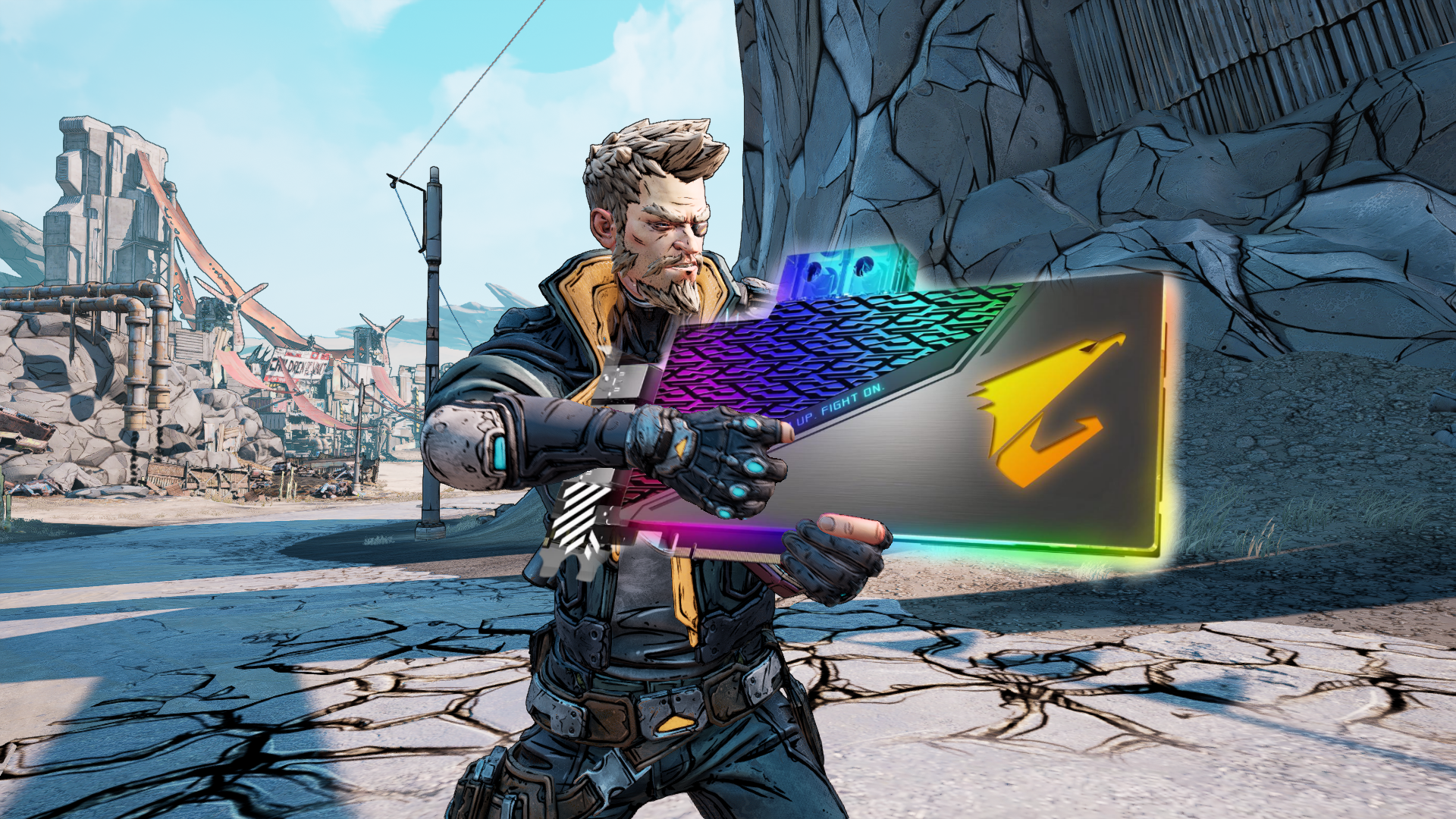 Then there's the Gigabyte Aorus GeForce RTX 2080 Xtreme Waterforce (above). Rippling with rainbow-coloured LEDs, this slick, glowing assault rifle fires bullets that turn into tiny miniature eagles upon impact and whose empty magazines fly away from the battlefield. 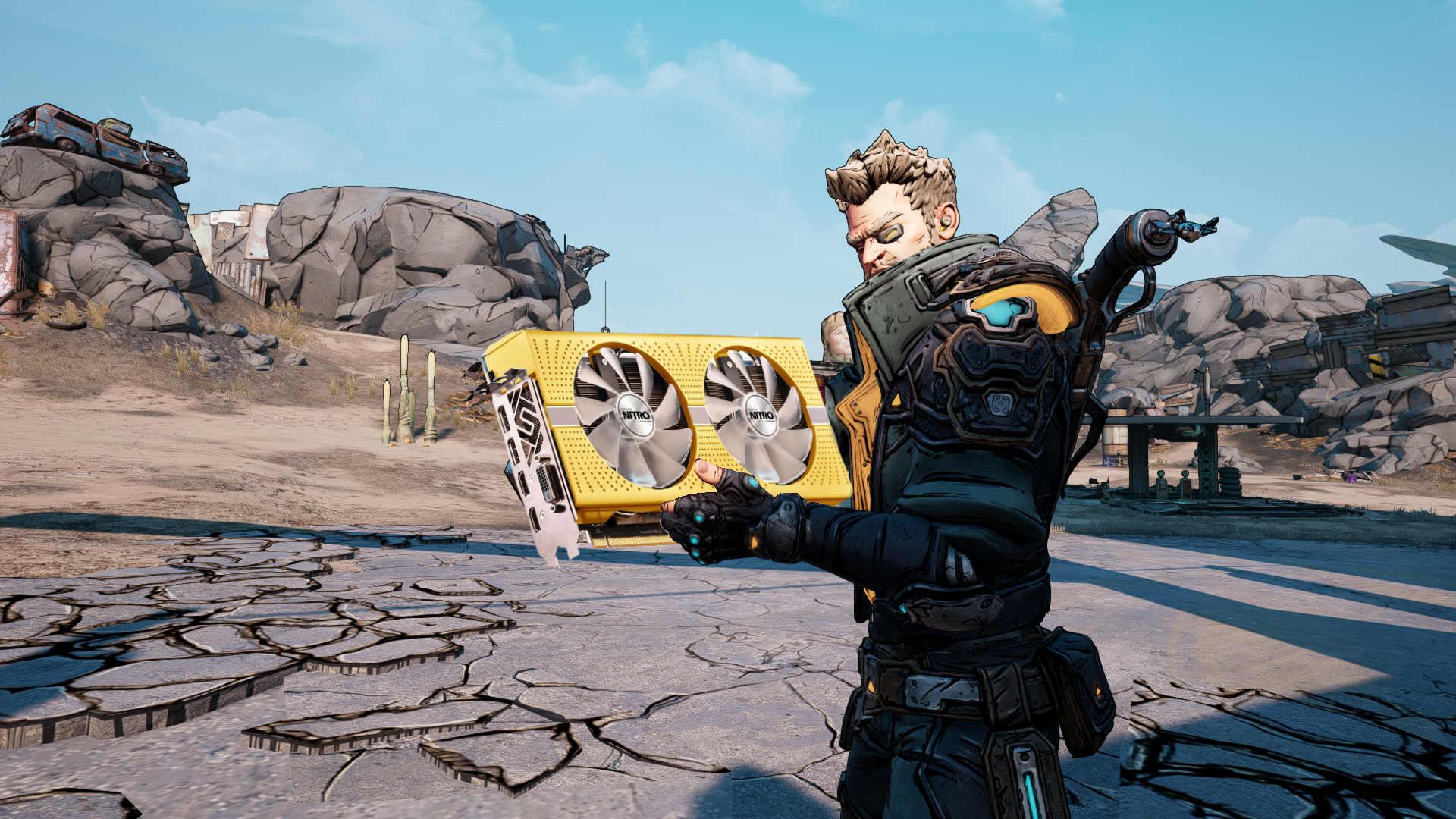 Next, we have the Sapphire Radeon RX 580 Nitro+, the golden legendary version of AMD's standard RX 580. Fired in reverse, bullets exit this weapon through the six individual barrels on the rear of the gun. It has a fantastically high fire rate, and pinpoint handling. 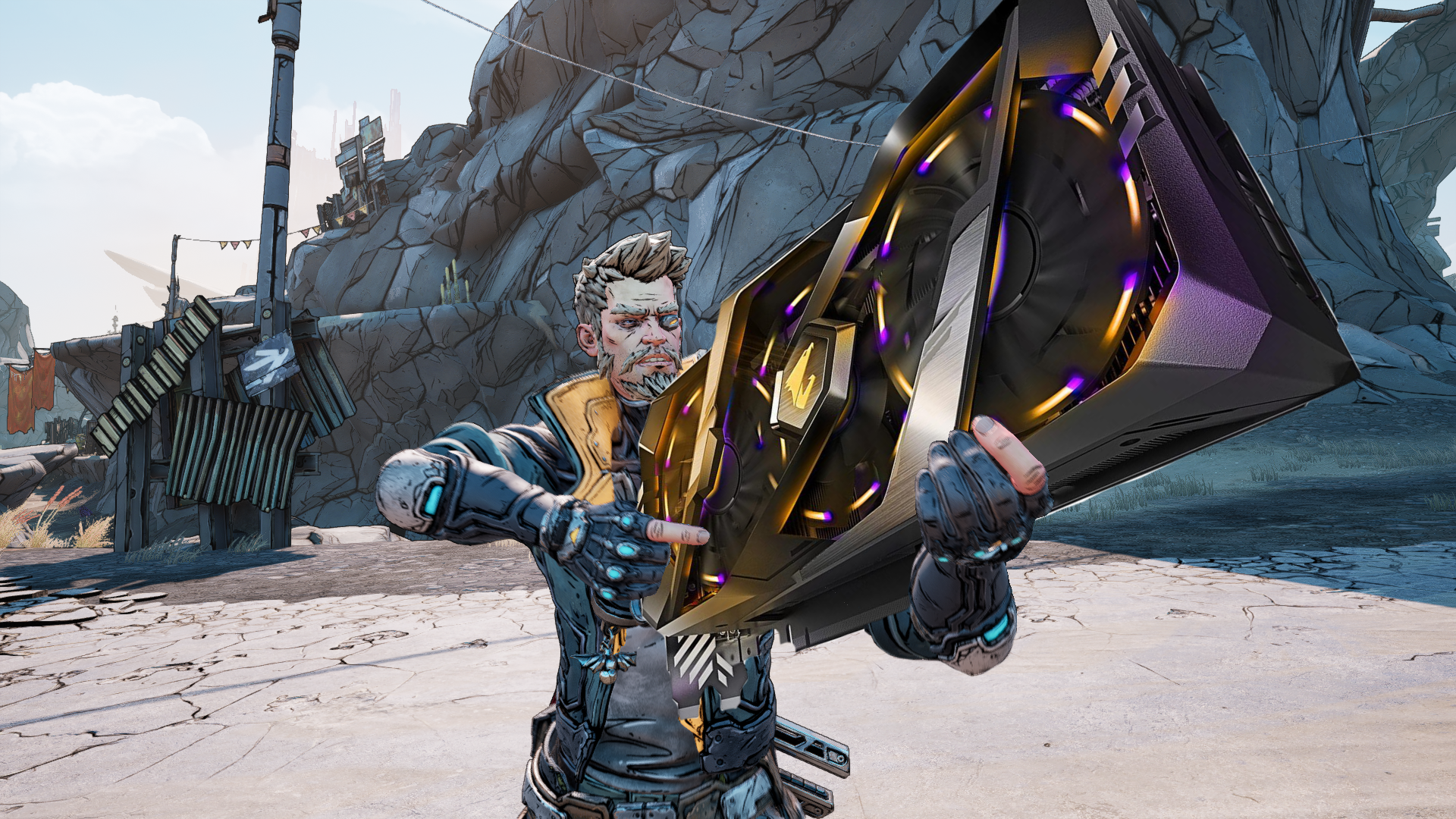 The Gigabyte Aorus GeForce RTX 2070 Xtreme, on the other hand, is a meaty Jakobs shotgun that really packs a punch. Almost too large for anyone to hold with any degree of competence, this powerful weapon has poor accuracy but a very wide spread. Chews through five bullets per shot. 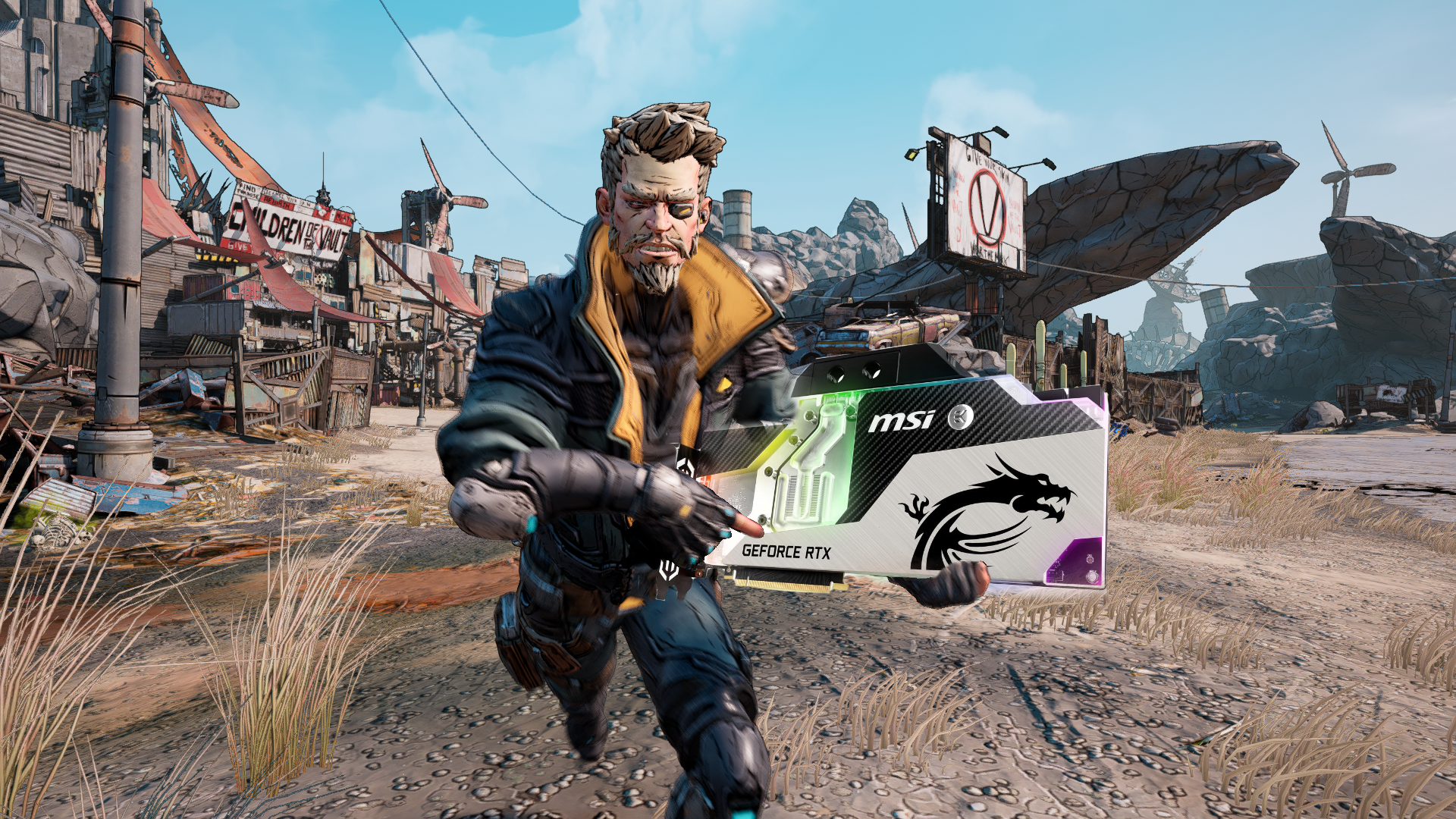 Then there's the MSI GeForce RTX 2080 Sea Hawk Ek X. A small, but deadly rainbow-laden SMG, this gun has a secondary feature that lets it fire tiny turrets in the shape of robotic dragons that also breathe fire when they run out of bullets. 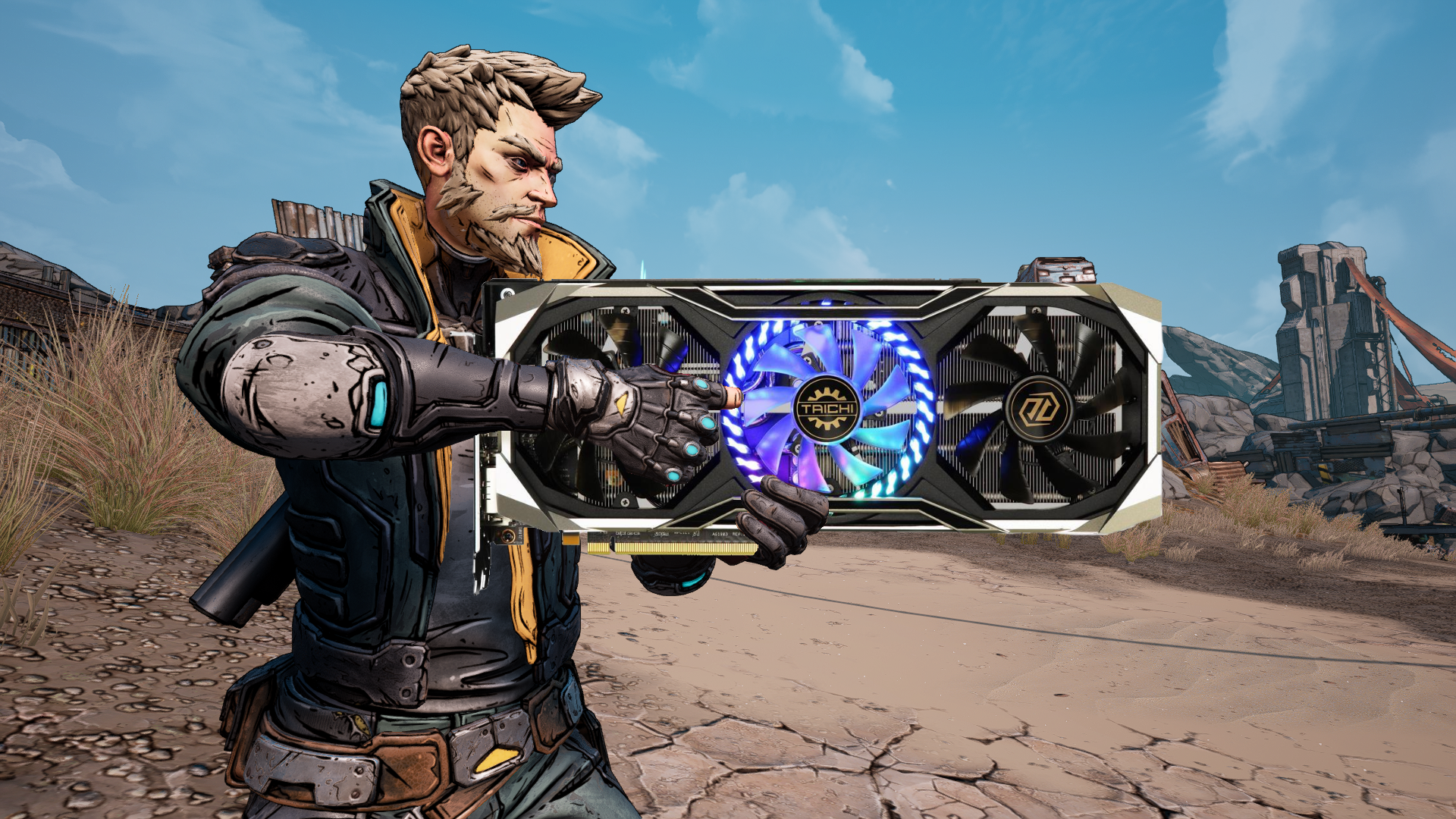 The AsRock Radeon RX 5700 XT Taichi, meanwhile, is a sniper rifle with a twist. It's large and unwieldy, but it has an enormous magazine and its scope folds down into a decorative LED ring when it's not in use. It has a terrible reload speed, but its fire rate is to die for. 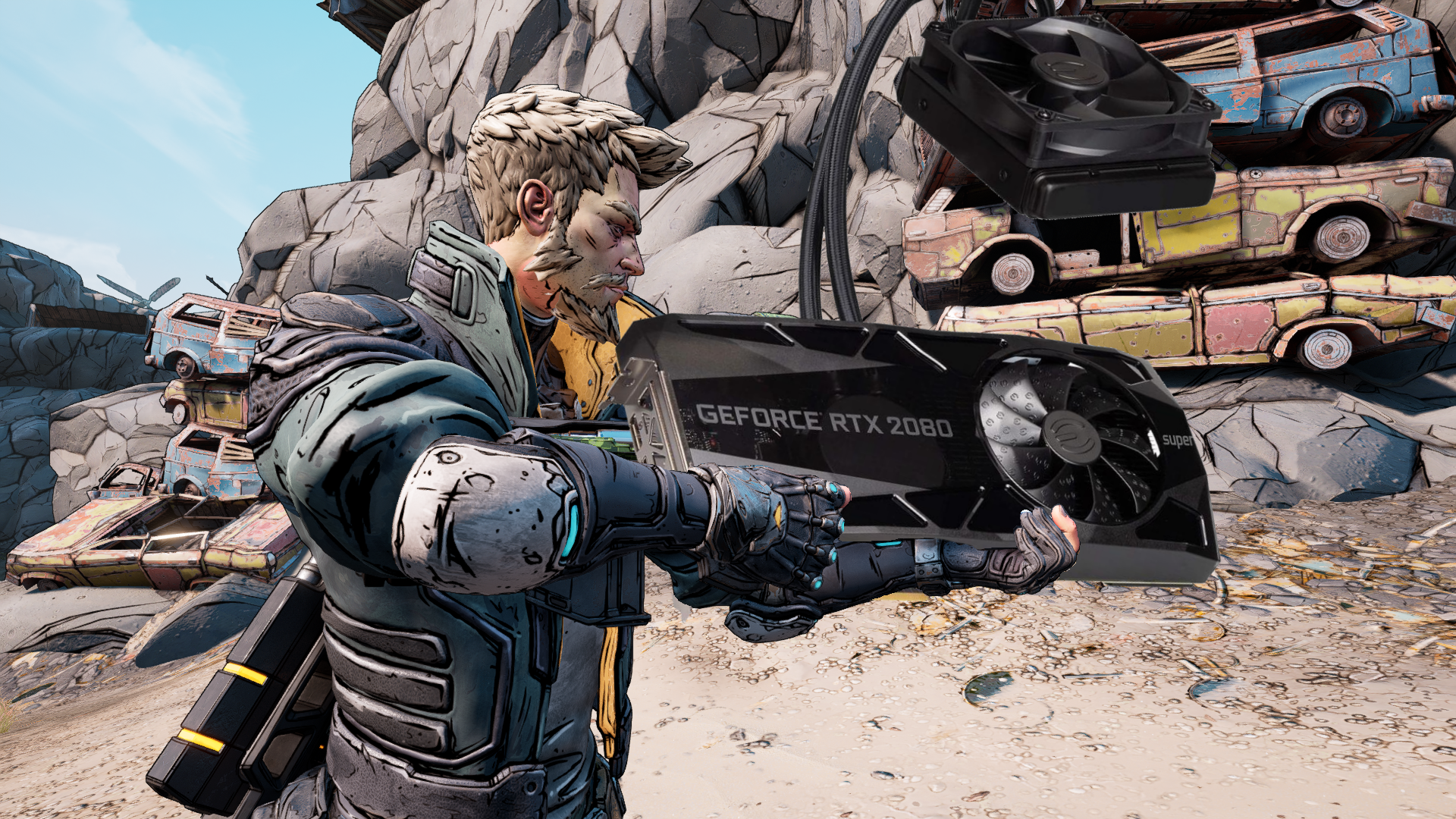 If all those aren't actual guns in this game, I will eat my Red Taichi Hawk Ek FTW3 Hybrid Xtreme Nitro+ assault rifle. That said, for more information on the actual weapons of Borderlands 3, check out our brilliant guides team's in-depth Borderlands 3 weapons guide, which includes Ollie's helpful cheat sheet that tells you everything you ever wanted to know about the billion guns of Borderlands.