The makers of upcoming post-apocalyptic, narrative-driven RPG Broken Roads have explained how its morality compass works, and it’s already making me worry about my decisions. As someone who likes to play RPGs through in a few different ways, because you can’t be evil in your first playthrough, I’m intrigued to see how my actions will come back to bite me later on. I think the system bears some resemblance to the personalities in Disco Elysium, but I can see Broken Roads being a tad more unforgiving.

The moral compass is the subject of a recent blog post from Drop Bear Bytes. It features four quadrants “Utilitarian, Existentialist, Nihilist, and Machiavellian," which might change in the final release, but these at least give you an idea of where they’re going. Your choices, quest and adventure decisions, and dialogue options determine where your moral standing lies within these quadrants. Bonus points to any fans of The Good Place because you’ll probably understand what these ethical theories are.

So how does Broken Roads establish your moral standing? Well, during the best part of every RPG, the character creation screen, you’ll be presented with a series of moral quandaries. For example, is it right to steal a loaf of bread for your starving sister and her child? Your answers determine your moral standing, represented by an arc on the moral compass. 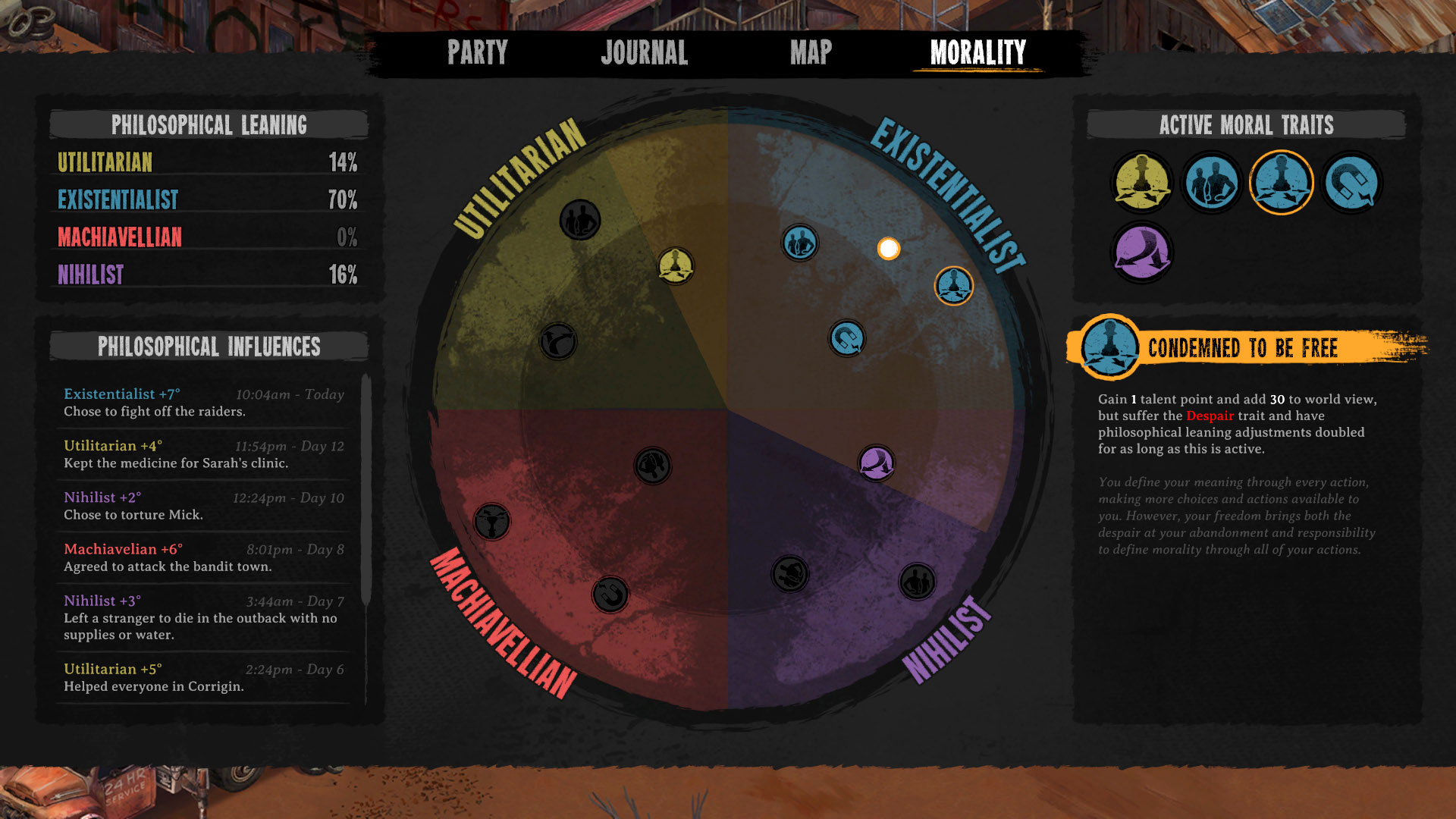 Pretty much everything affects your moral standing. My character, let’s call him Max, might be a little unhinged but ultimately work for the greater good. His moral standing would start somewhere between machiavellianism and utilitarianism. Suddenly he comes across an escaped slave asking him for help, and I have a choice to make. If I choose to capture and return the slave to their master, then Max’s moral standing would remain where it is because this was a narrow-minded choice. On the other hand, if I choose to have Max help the slave to the nearest town and onto freedom, his moral standing will shift towards existentialism, because this was a broad-minded choice.

With choices come consequences, and Broken Roads has some interesting ones. Instead of your actions or decisions triggering some sort of payback later on, your moral standing will activate helpful or hindering traits. Looking at Max again, he probably has a trait that allows him to use a powerful weapon, a sawed-off shotgun say, but that trait could also increase the damage he takes from critical hits.

The final version of the moral compass will also show you data about where most of your decisions lie in the quadrants, and track how much they changed your moral standing. If I’m trying to play as a saint and I think I’ve made a bad choice, Broken Roads is the game that will see me curl up in a ball of regret.