I am extremely generous to games, although mostly in my memory. My recollection of Call Of Juarez: Gunslinger is of a genre-busting, frame-breaking piece of Brechtian Estrangement. A first-person shooter that played with concepts like verfremdungseffekt, the unreliable narrator and the Rashomon effect, it was a text that... Yeah, no John's memory, it's just a super-fun shooter with some silly storytelling bits.

OK, "unreliable narrator" and "Rashomon effect" are fair enough, although let's be honest, not exactly in the most sophisticated way. Bertolt doesn't need to worry himself. But perhaps somewhat more importantly, Gunslinger (and we'll call it that, because the closest the game gets to Juarez is an aside in a conversation - that's quite the call) is just a tremendous amount of fun, in one of the most visually pleasing games I've played. 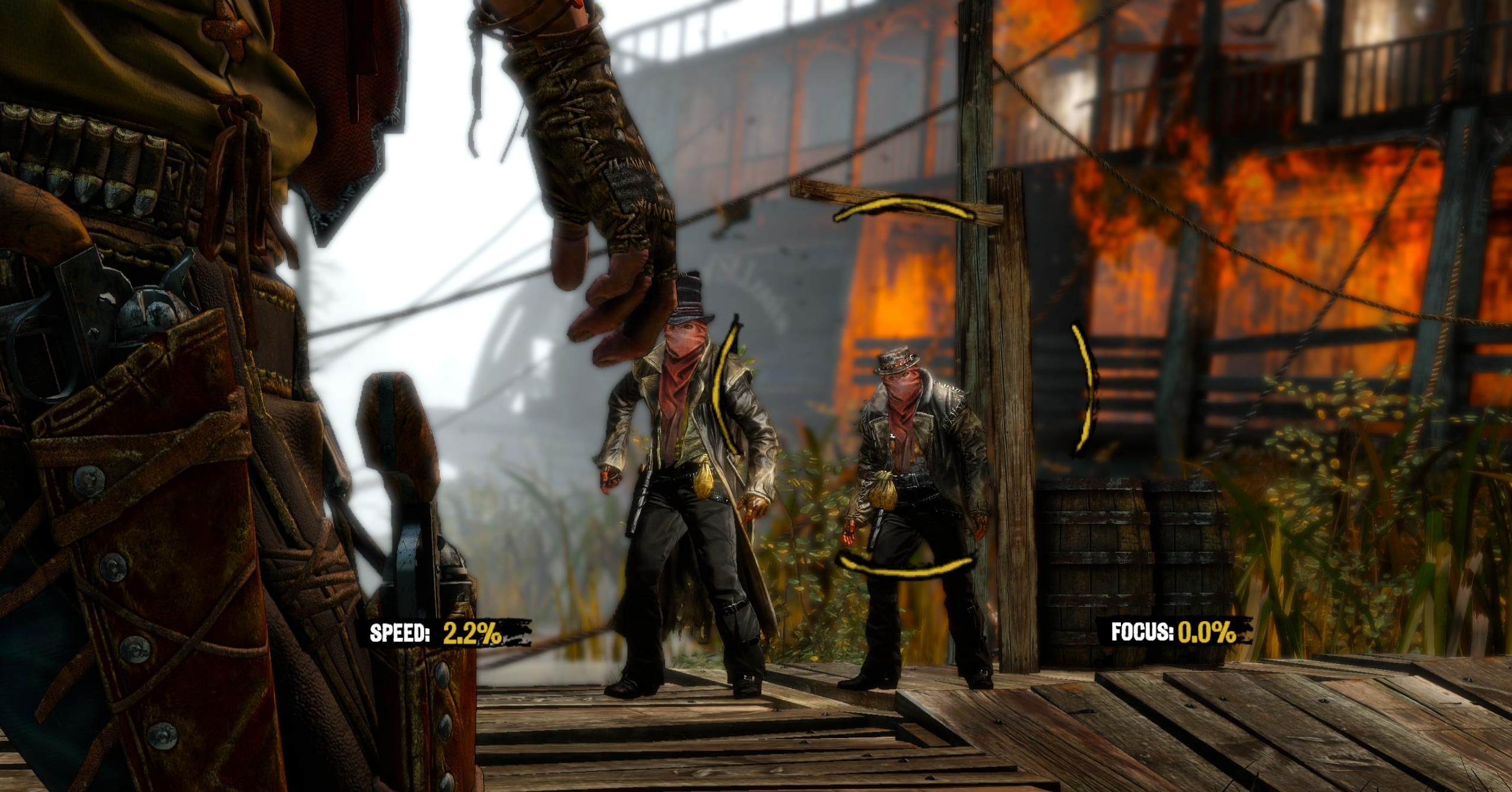 The main idea behind this 2013 entry in Techland's Call Of Juarez series is an elderly cowboy, Silas Greaves, recounting his somewhat dubious tales to a table full of drinkers in an Old West bar. His small audience ranges from the deeply sceptical to the enthusiastically credulous, as he relates his encounters with every famous name in Western folklore. Jesse James, Billy The Kid, Butch Cassidy... if you've heard of them, Silas claims he either fought alongside them, or was responsible for their deaths. You may well be suspicious. And as each tale is told, we play as Greaves in that situation, what really amounts to a shooting gallery of daft enemies hopping up and down from behind cover, and gloriously so. 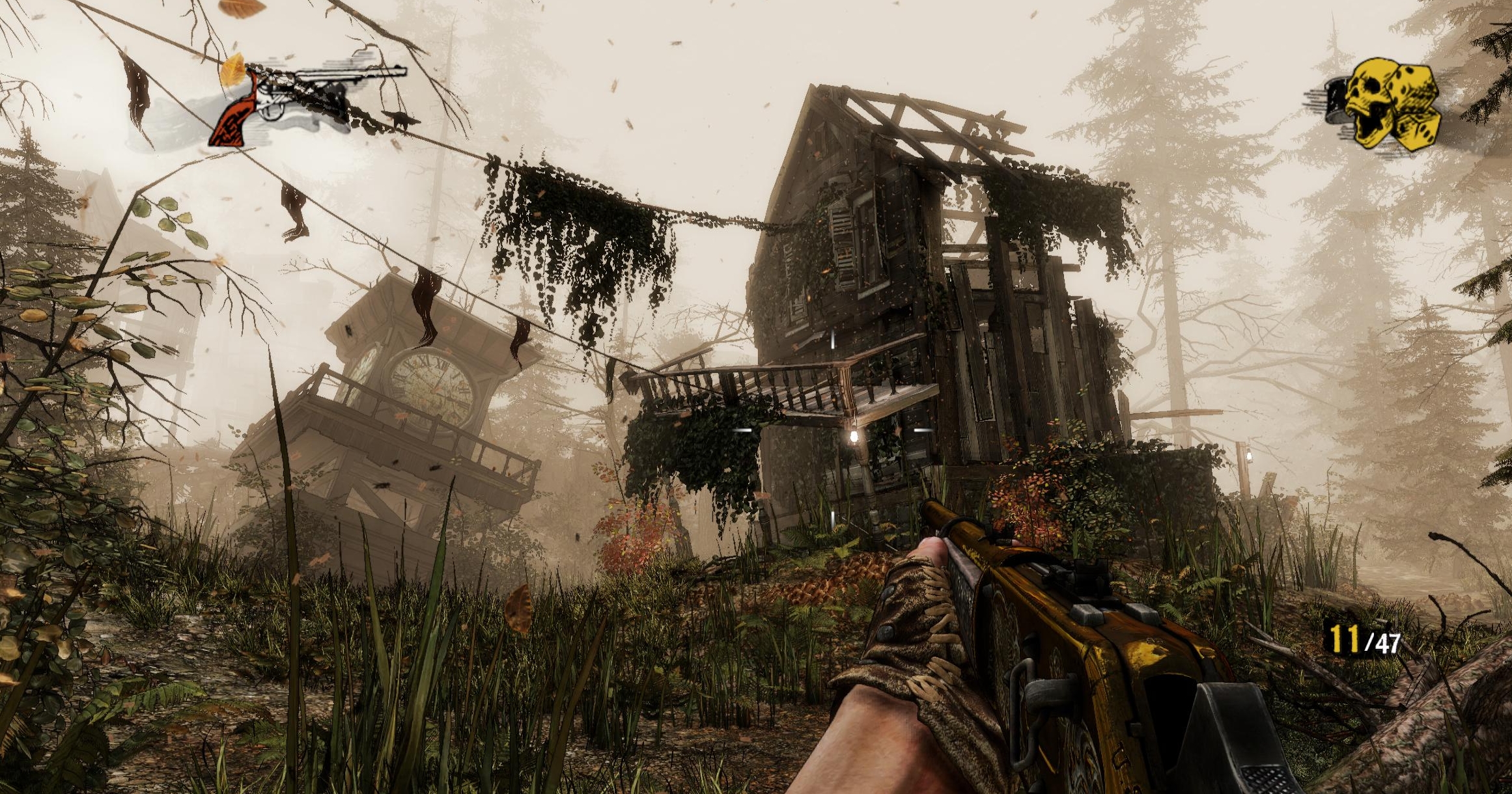 The gimmick is, of course, that Greaves' recounting is so unreliable that his saloon companions will occasionally call him out on his contradictions or outright lies. In those moments, Silas stumbles, catches his thread, and then bullshits his way out of it as the situation around you changes. When someone points out it's unlikely he was facing American Indians in a particular battle, they are rapidly swapped out with a particular cowboy gang. After one situation is played out in a supremely unlikely fashion, time rewinds and we play the same level somewhat more realistically. And goodness me, reading that, yes! That's the game I remembered! Except, in reality, this happens far less often than I remembered, and perhaps more significantly, far less effectively. 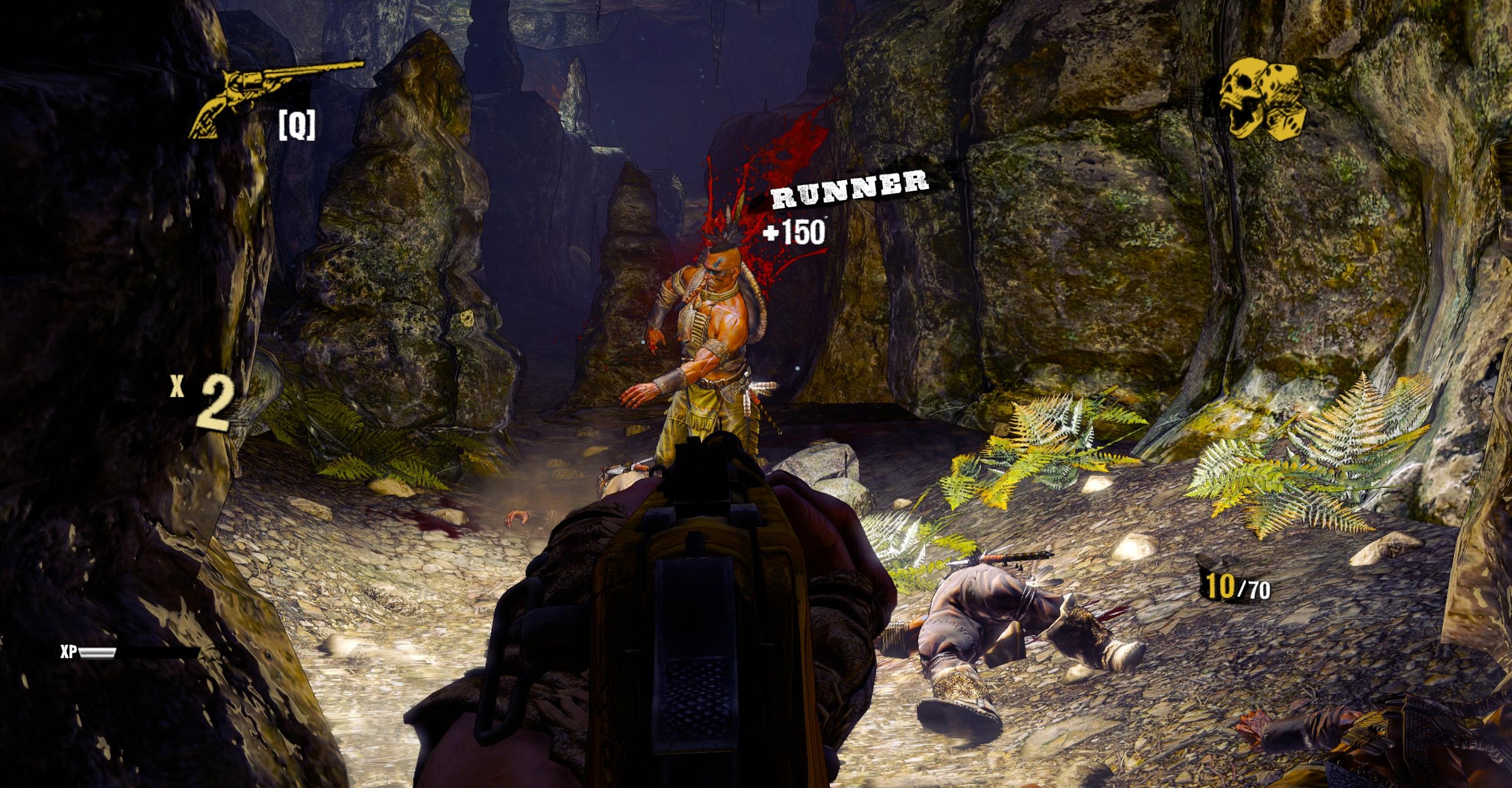 There's another level where the hunting down of a group of bank robbing brothers is told from three perspectives: first by the enthused youngster who read about it in a dime novel, the second a more realistic eye-witness account from another listener, and the third in Silas's outlandishly over-wrought and meandering style. Which sounds great in concept, but in delivery isn't given the wit and smarts to make the most of it. It's not like on the second time through the same scenarios occur but in less heroic or unlikely ways. What could have been some masterful satirical contradiction is instead just a somewhat similar level played through three times, the third a far longer and more protracted chase mostly in a different area.

Quite a few other levels have Silas conveniently remembering escape routes where previously there had been none, with new sections of scenery falling in from the sky - I love that! But again, it's not done with much aplomb. You're trapped in a small circle of high rocks, shooting desperately at enemies above you in all directions, and then at the end he reports suddenly noticing a way out he'd not seen before, and it drops into place. Er, huh? Sure, his storytelling is deliberately suspect, but this just flat-out makes no sense. 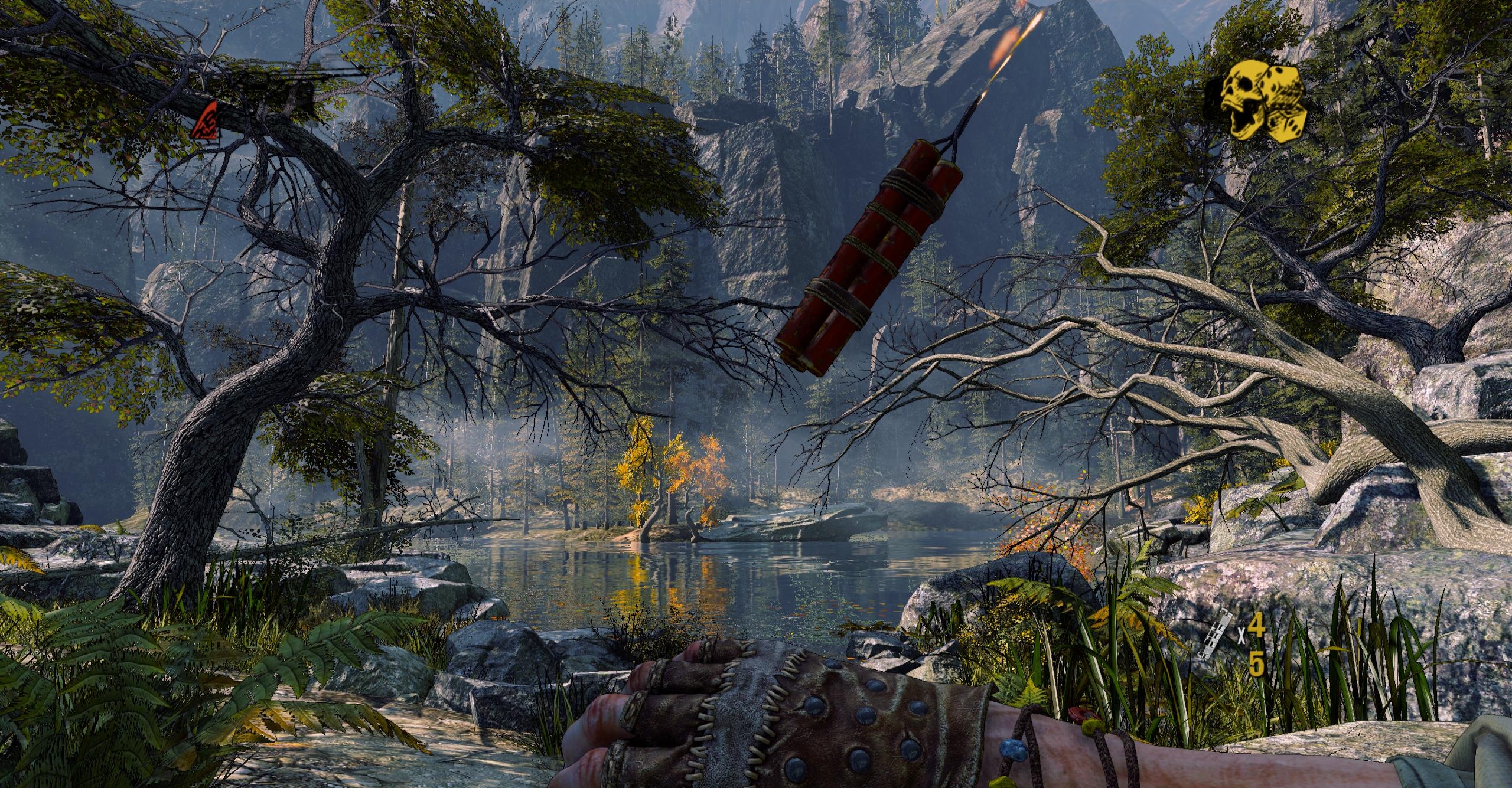 The thing is though, Gunslinger doesn't even need the gimmick to work. Because it's such a gratifying delivery of the core essence of the FPS, the fourth-wall stuff is a little bonus frill along the way. The modern linear FPS is always a shooting gallery, no matter how hard they try to disguise themselves. Oh gosh the worst is the gruesome Call Of Duty single player campaigns of recent decades, where bluster and noise is their best attempt to hide that you're really playing an arcade machine from 1992. Gunslinger completely embraces it, most often encouraging you to run into a scene, dive behind cover, and then blap the heads off the daft numbers of enemies that pop up from behind rocks, buildings and bushes like the decorated targets they absolutely are. It then rewards this, whether you choose to play as someone who attacks with a rifle from a distance, or close up with a pair of pistols, shotgun, or what have you. 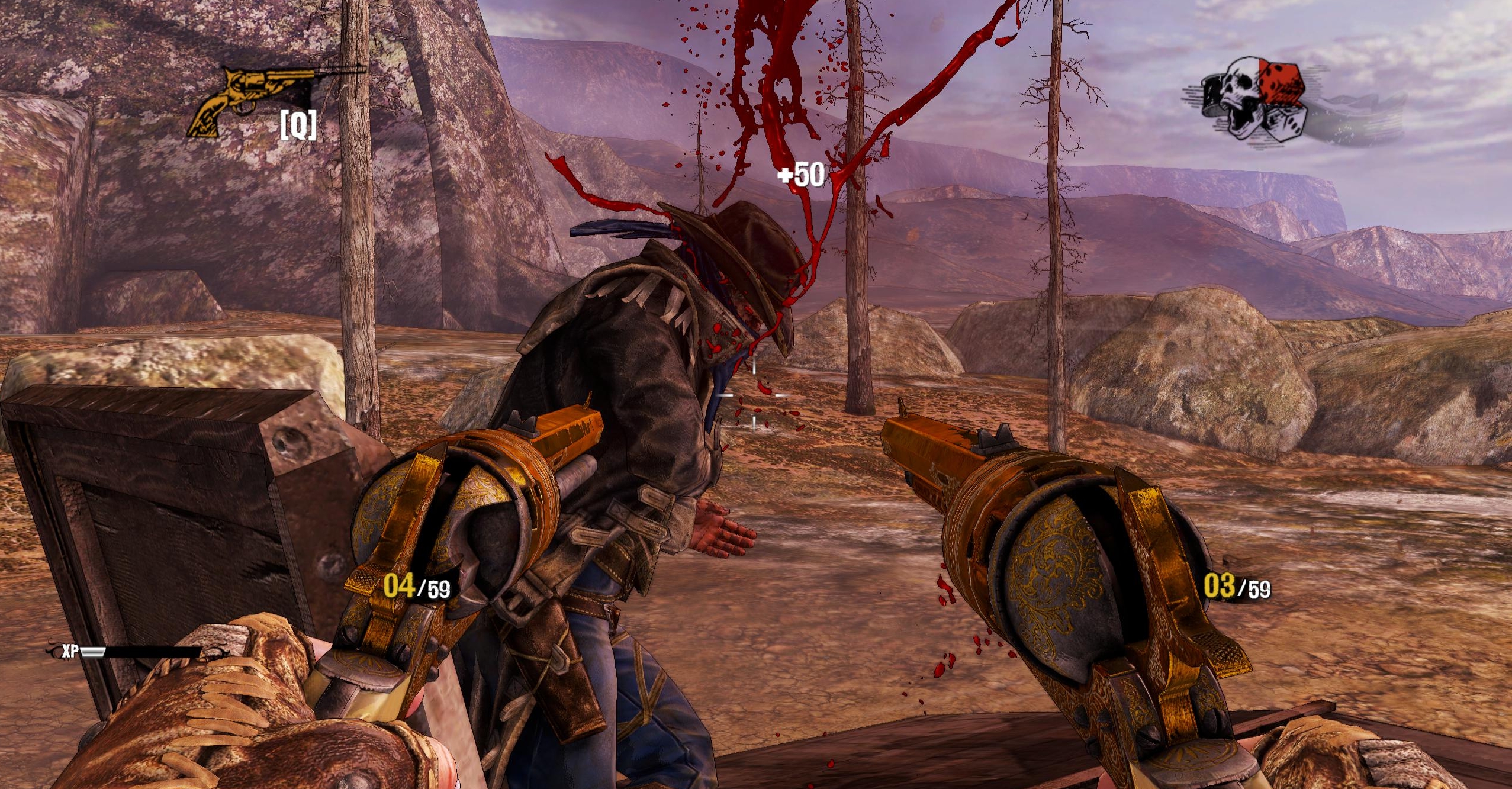 It also helps that it does it so damned prettily. I'm gobsmacked by how good Gunslinger still looks seven years on. I'm mystified by it, frankly. Using that sort of rotoscoped effect from Borderlands, but FAR more effectively, the fine black outlines around everything in the world give it a cartoonish feel that hides a lot of years. And the vistas, the incredible views, the mountains and forests, are so often breathtaking. It runs so beautifully on modern screens, stretching to 3440x1440 without complaining (although the HUD goes a bit squiffy at super-widescreen). It still has that irritating scratchy border effect, but that can be switched off. Overall, I'd not have a question to ask if a game were released today looking like this. 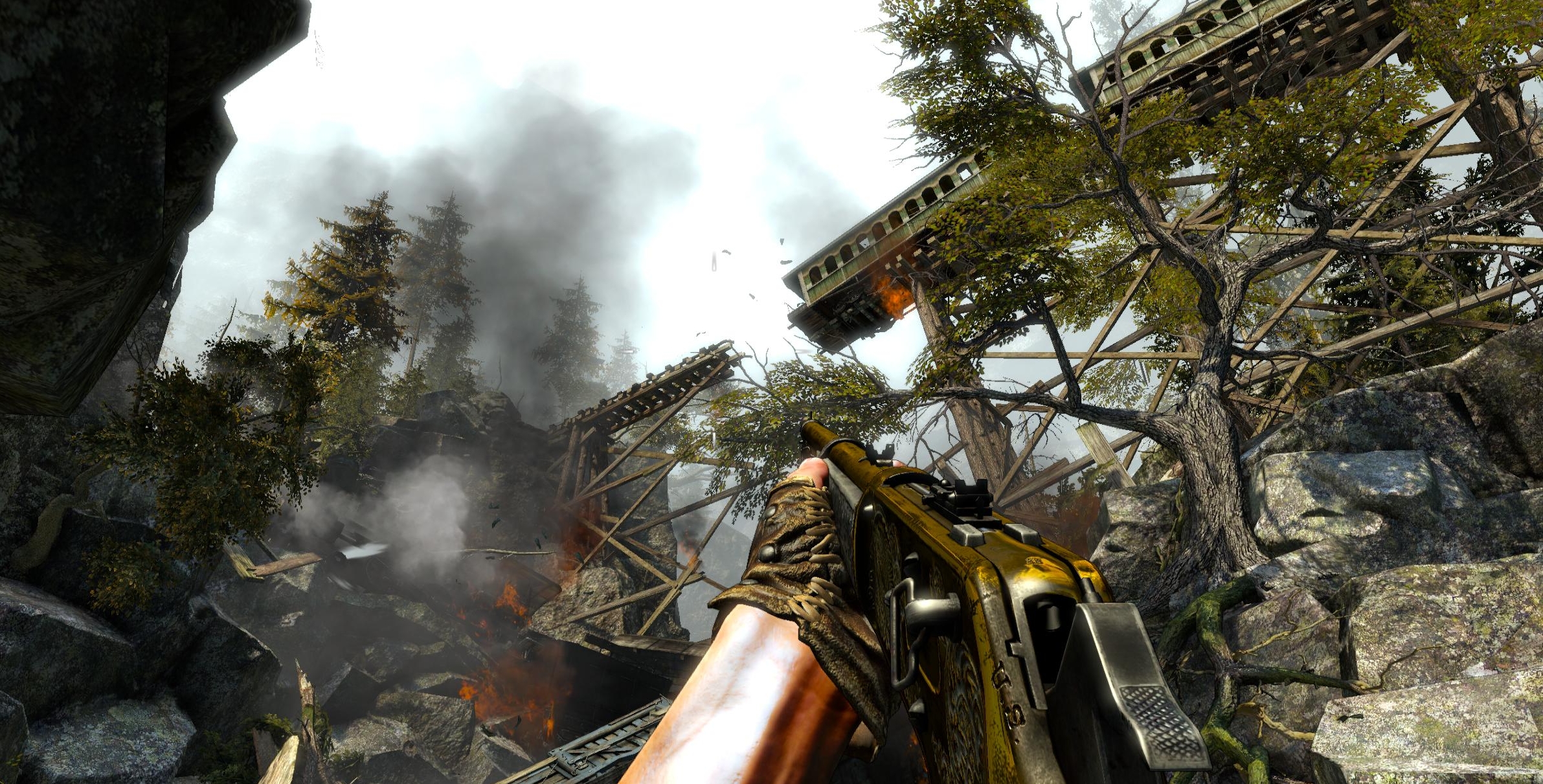 Yes, the duels still suck. This guide is super-helpful for understanding what the game so badly explains, but goodness knows they add nothing. However, if an oaf like me can get through the whole game on "Hard" in six or so hours, then so can anyone. And yes, the ending is predictable, but it's good predictable! Any other ending would have been disappointing, and that's a science fact. My only real issue with the game is that the levels are just too short, the game cutting away from one situation to another too soon - I wish it would let me settle in a bit more before yoinking me away elsewhere. But hey, I'm complaining because I'm having a good time, and that's the best kind of complaint.

If you're in the mood for a really satisfying linear FPS, with a grin on its face, Gunslinger is still a proper fun time. It's not as clever or as innovative as I'd mythologised in the years since, and I would really love to play the game I had in my head, but this remains satisfying for a whole bunch of other reasons.

Can I still play Call Of Juarez: Gunslinger?

Without a problem. You may want to hack out the silly borders for a much nicer appearance. The HUD ends up in a silly place at ultra-widescreen, but that's the only issue I've found.

Should I still play Call Of Juarez: Gunslinger?

Yes! It's so much fun! Sure, the gimmick could have been much better developed, but it turns out it's its purity as a shooting gallery that makes it quite such a good time.