MSI's RTX 2080-powered GS75 Stealth laptop may have been their big announcement for this year's CES, but personally I was much more taken with the next model down, the newly RTX-refreshed GS65 Stealth. Also packed with an RTX 2080 in its energy-efficient and laptop-friendly Max-Q design, MSI's calling this 15.6in laptop the most powerful ultra slim device of its respective size category, and it's a real beaut.

Measuring 17.9mm thick and weighing an infinitely better (although still quite hefty) 1.9kg compared to the 2.25kg GS75, it shares a lot of the same design cues as its larger brother. You get the same elongated touch pad, the same cooling innards to help prevent its GPU from throttling under load, and you also get the same gold trim and matt black chassis, which looks pristine for all of five seconds until someone actually touches it. Admittedly, it would probably look a lot less grubby if the world's press weren't poking and prodding it for hours on end, but needless to say, you'll probably want to keep a dust cloth on hand to keep it looking its best.

Still, with an 82% screen-to-body ratio, the GS65 Stealth's 15.6in, 1920x1080 panel looked stunning, giving you a whole lot of screen for the size of the laptop. It has a 144Hz refresh rate, too, allowing you to make full use of its RTX 2080 horsepower. Bizarrely, MSI once again lists it as 'IPS-level' rather than proper IPS, but I'll have to wait and see how it actually performs once I get my hands on a review sample. 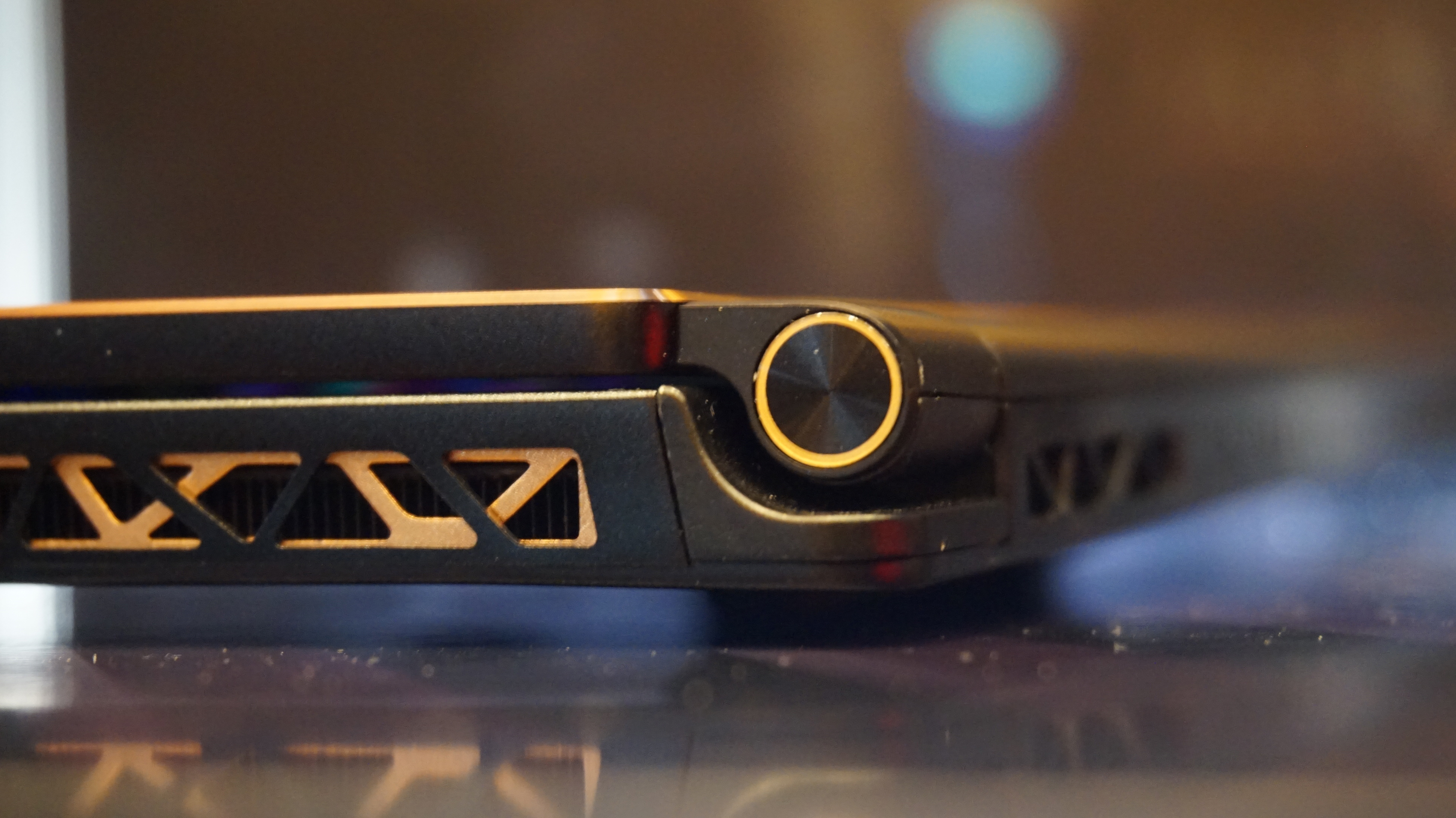 Paired with one of Intel's 8th Gen Coffee Lake Core i7 CPUs, the GS65 Stealth should have plenty of processing oomph for everyday tasks too, especially when you're working off an NVMe SSD and an NVMe / SATA combo drive. And crucially, it didn't feel nearly as hot as the GS75.

You'll have to put up with the RGB light show that is the GS65 Stealth's keyboard, but you can always turn the LEDs off or change them to a single block colour using MSI's built in Mystic Light software. The keyboard itself felt great to type on when I had a quick tap on it, providing plenty of travel and wonderfully firm, quick key presses. 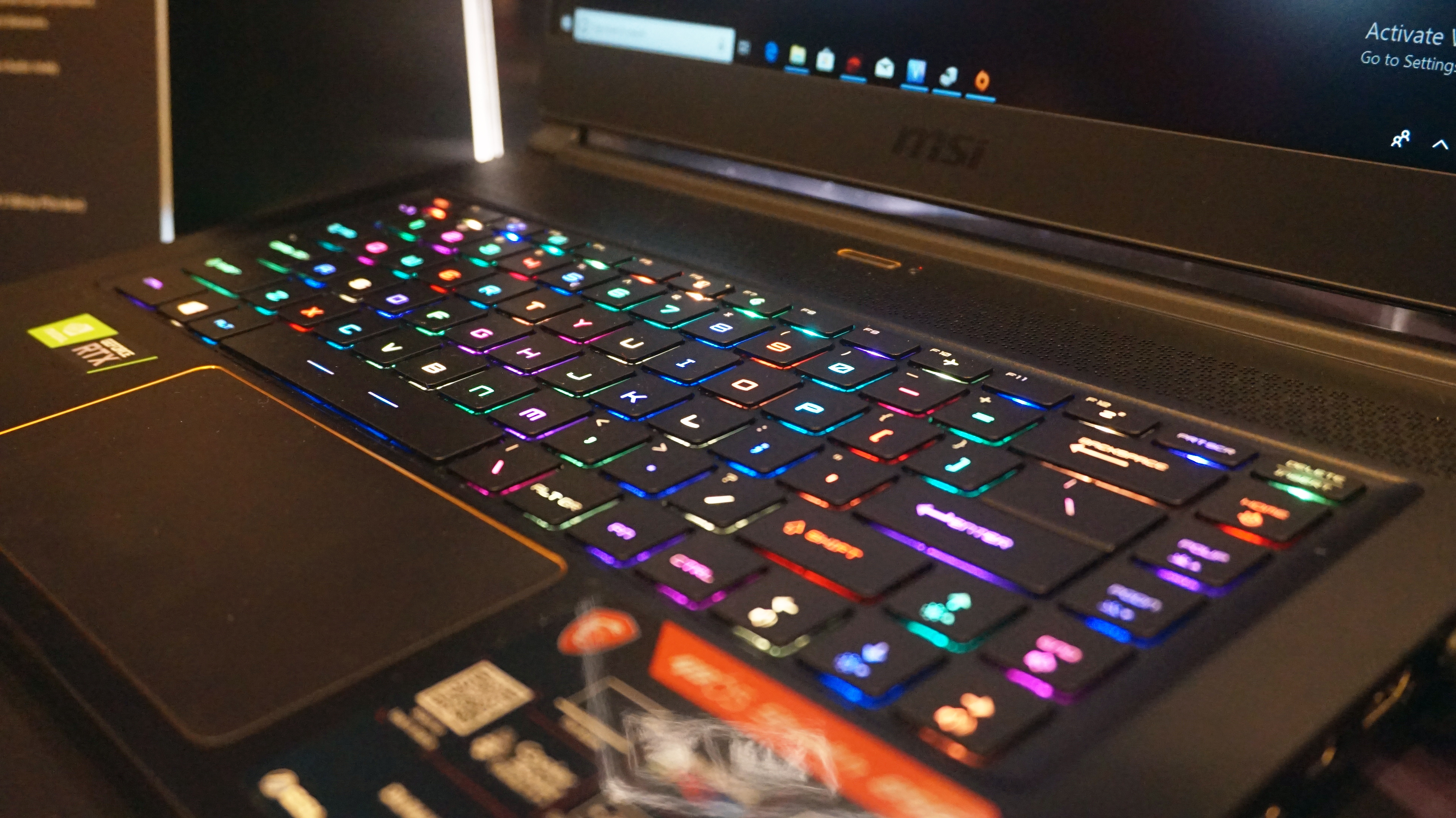 I infinitely preferred it to the GS75 Stealth's keyboard, and the keyboard tray as a whole just felt a lot sturdier than its GS75 sibling. That might be to do with its smaller, more portable size, but I felt a lot more confident about picking this thing up than I did the GS75. This I could imagine lugging around with confidence; the GS75, on the other hand, felt like a fragile china doll by comparison.

The GS65 Stealth doesn't compromise on ports, either, as you still get a full-sized HDMI 2.0 and miniDisplayPort 1.2 output, as well as one USB-C and three regular USB 3.1 ports. You also get separate headphone and microphone jacks and (just about) a Killer Ethernet port.

Otherwise, not much has changed since the GTX 10-series version of the GS65 Stealth. There's currently no word on how much the RTX version will cost, but with a lot of RTX laptops due out at the end of the month, it hopefully won't be long before I can put it through its paces and bring you a full review.