2020 is the year Intel finally make their return to the discrete graphics card arena, and last night they gave us our first look at their upcoming Xe GPU during their CES 2020 press conference. Admittedly, Intel only showed one of their mobile Xe GPUs in action rather than a full desktop version, but when that demo involved running Destiny 2 on one of their new Tiger Lake series of ultra-thin Core laptops, there's still plenty to get excited about.

What the heck is Intel Xe?
Xe is the name of Intel's new graphics architecture. First announced in December 2018, the Xe family will include GPUs across a range of different products, including laptops and PCs right up to data centres. It's been designed to complement and scale across everything that Intel does, so don't expect every Xe GPU to be aimed at PC gaming. However, Intel did say they'd release their first discrete Xe GPU in 2020, so here's hoping we'll still get a desktop gaming GPU before the year is out.

Code-named "DG1", Intel's vice president of architecture for graphics and software Lisa Pearce said it was still early days for the mobile version of their Xe GPU, but that they were pleased with how its gaming performance is coming along. Admittedly, the demo itself looked quite choppy - I'd hazard a guess that it was only running somewhere around 30fps rather than 60fps - but without any information about what resolution or graphics settings it was running at, it's difficult to draw any real conclusions from it at the moment. 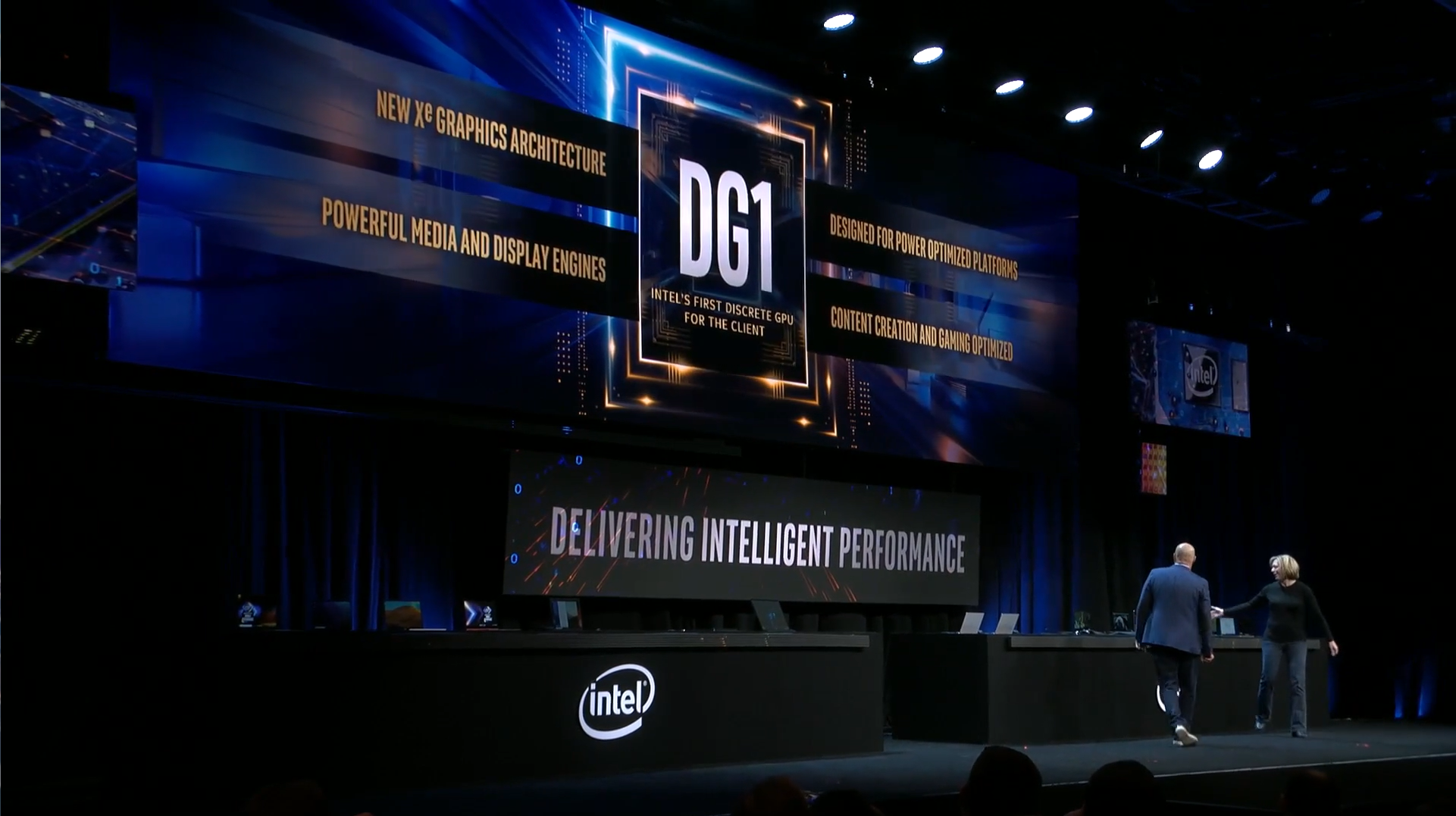 Most importantly, it should mean you'll be able to get more gaming performance from ultra-thin and light laptops as well as your typical gaming laptops. That was really the biggest take home message from Intel's DG1 demo at CES, as the laptop the Destiny 2 demo was running on definitely wasn't one of your standard gaming laptops.

Instead, it was a laptop running one of Intel's new Tiger Lake Core CPUs. Based on Intel's 10nm+ manufacturing process (so not quite 7nm like AMD's new Ryzen 4000 laptop CPUs yet), these processors have been specifically designed for thin and light laptops - and as you can see from the image below, they're going to be pretty darn dinky.

Intel haven't revealed any specific model name or specs for their Tiger Lake CPUs yet, but the first Tiger Lake system is expected to arrive later this year. What form it will take, though, is anyone's guess.

Earlier in Intel's CES conference, for example, they showed Tiger Lake running on Intel's latest concept device. Code-named "Horseshoe Bend" and pictured below, this a large 17in, foldable OLED screen device that, when folded in half, is similar in size to a 13in ultra-thin laptop. Open it up, however, and you've got one giant 17in desktop screen. 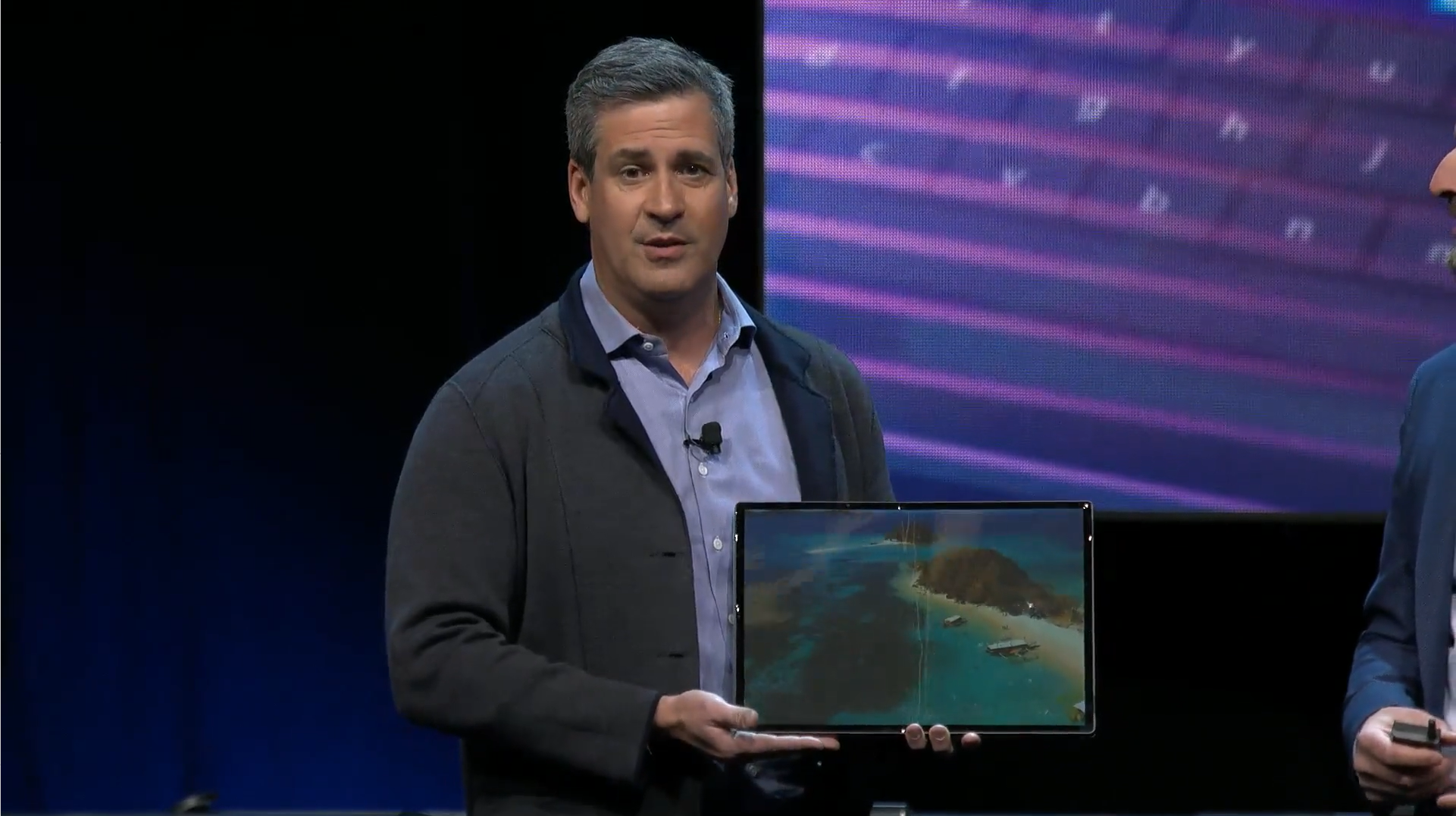 Just imagine playing Destiny 2 on a device like that. It might not be the most practical way of getting in a few raids on the move, but it has the potential to open up a whole new category of gaming devices that previously only offered very limited or no gaming performance at all.

Alas, that was all Intel had to say about Tiger Lake and their Xe GPUs at CES this year, so we'll have to wait a little while longer before we get to see what their desktop Xe GPUs have in store for us later in the year.