Get ready for a copyright-related headache, friends. One of the most iconic cars in Formula One racing sim F1 2017 appears to be the work of a modder for a completely different racing game, Assetto Corsa.

The car – Michael Schumacher’s Ferrari F2002 – was reproduced by modder Somchith Vongprachanh last year for players of the Italian-made racing sim. But in May this year he saw a trailer for Codemasters’ latest F1 racer, which featured the same iconic car, and felt that the particular 3D model shown off by the developers had some troubling similarities to his own work.

“Now I didn't want to believe my work was stolen because Codemasters is a well renowned video game developer,” he said in the forum post where he first brought this up. “They have people to model these things for them right?”

Months later, however, he came across an Artstation page run by a senior artist at Codemasters, which he says contained some of the assets from F1 2017, including a model for the classic car. Somchith downloaded the model and compared it to his own work.

“Now looking at the wireframe was a dead giveaway that it was indeed my model F2002 that I worked on for months,” he said. “I could see all the choices this artist made that nearly matched all the same choices I made. My heart sunk and I felt disgusted.”

The Artstation entry which once housed the assets has since been taken down, he says. A purported response from the artist, however, said that the modder had “provided excellent reference for us” and allegedly offered to buy a copy of the model "as gesture of good will" from the modder's Turbosquid page (an asset-sharing site where the model costs $159).

Codemasters deny the model in the mod was directly used and tweaked by their artist.

“During the creation of the historic cars for F1 2017, we used a myriad of reference material and images,” Codemasters told us in a statement. “We would like to stress that the model used within the game is the work of our studio and fully approved by Ferrari and Formula One Management."

However, we asked several 3D modellers whether it was possible for two artists to come up with a mesh as similar in construction as these two examples - the modder's car model and the one by Codemaster's artist. They all agreed it was unlikely.

“Even if you have two people who model the same vehicle they're gonna have different approaches to it, leading to different topologies - the wireframes would never match up as well as they do in those images,” said Andreas Jörgensen, who has worked on games like The Stanley Parable and The Signal From Tolva. 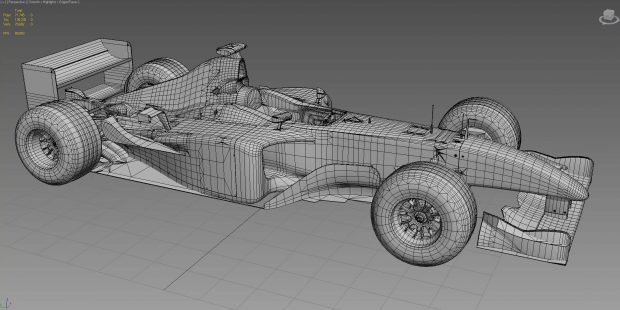 “There are certain techniques for modelling that would result in the same topology (wireframe) but the chances of two different artists coming up with the same mesh for something as complex as a formula one car are millions to one... unless the object is incredibly simple, the chances of 2 people modelling it in the same way are essentially zero.”

We’ve asked both Codemasters and the modder for additional comment and will update the story if needs be.