Quake Champions is a fascinating experiment in remaking a game and trying to make that game both exactly like the original game but just More. The title has been impressively on top of their game, regarding monthly-ish updates and the addition of new characters, maps, and balance tweaks. They've also made the way that you and your pals explode into meat much more specific. Now, there's a way to free yourself of your terrible online name choices AND there's a beautiful, relaxing river cruise down The Molten Falls, in a newly added map.

Player Rename Tokens (1500 Platinum) are now available in the store, which gives you a one time chance to change your tag. It's 33% off for the first month, in case you have an embarrassing mistake worth rectifying.

Then there's the new map: The Molten Falls is a Goroth Map from Doomworld. It's designed as a very vertical location with wide lanes and ample lines of sight. Also on display: Gothic architecture, tons of pick-ups, and as expected, the floor is lava. 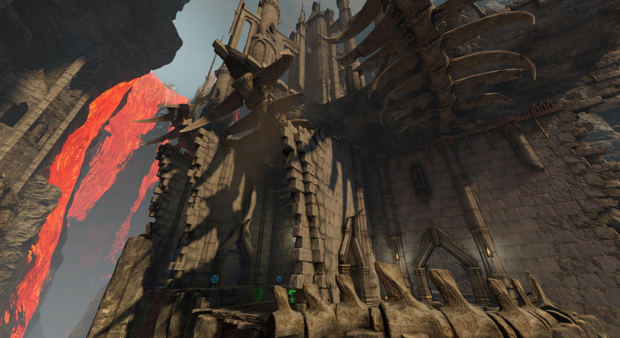 Rich wrote a piece for us about whether Quake Champions' updates have been actively improving the game, which gets into a bunch of fascinating balance issues and is also the first time I've been made away that B.J. Blazkowicz is in the game -- on loan from his new IP owners. Rich's piece also includes this incredible line about QC that is worth repeating here:

The official statement on these updates is right here, and it includes more than 100 small balance tweaks and UI/game updates in a more detailed report, which you can read at this here set of different colored words.

Quake Champions is available on Steam.