If, for some reason, you needed reminding of Quake Champions’ 90s heritage, then you need look no further than Anarki. One of Quake Champions’ 12 playable characters, Anarki (1) rides a hovering skateboard, (2) has a pink-dyed mohawk, (3) sports a pair of space JNCOs tucked into his metal legs, and (4) talks like the galaxy’s spaciest stoner dude.

QC borrows the weapons from that seminal game, handing over rocket launcher and railgun to its players, as well as Quake classics like the shotgun, nailgun, and lightning gun. Health and ammo packs operate on the same principle as they did in 1999, too, appearing dotted around the level for collection by speedy players. They’re joined by two extra-special pickups: protection, which offers significant damage reduction to the bearer, and the legendary quad damage, which does exactly what it’s always done. 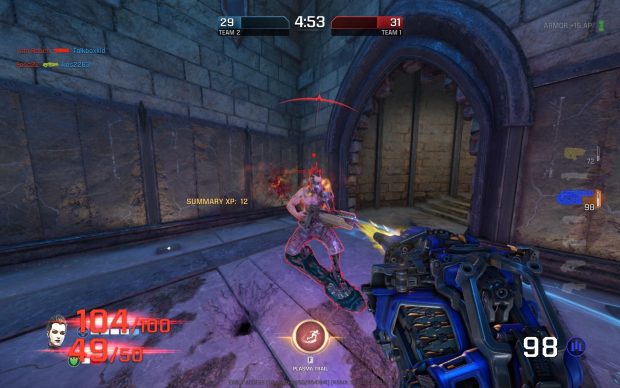 There are some concessions to more modern game design theories here, though. Each of QC’s playable champions comes with unique abilities that make each of them handle a little differently, making id Software’s game feel a little like the result of a telefrag accident between Quake 3 and contemporary shooters like Overwatch.

These abilities fall into two categories: active and passive. Active abilities are turned on with the F key, operate on a cooldown timer, and can change the course of firefights. For Anarki, this is a syringe full of mysterious drugs that, when injected into his cybernetically enhanced arm, overcharges both his health bar and his acceleration. This, coupled with his passive boost to air control, lets him turn the tables rapidly on chasing opponents, kickflipping his way back into fights he was previously losing.

Passive abilities are always-on buffs to movement, healing, or other core combat mechanics. Waddling tank robot Clutch, for example, will gain speed if it’s travelling in a straight line, and players can double-tap movement keys to execute a quick dodge in that direction. B. J. Blazkowicz — on loan from Bethesda stablemate Wolfenstein - will instead heal himself up to the next highest multiple of 25 when out of combat for a few seconds, while white-eyed space witch Galena reduces her active ability cooldown by picking up health items. 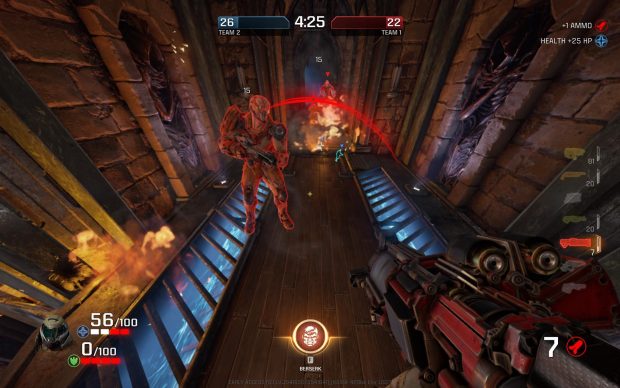 Galena’s active ability is one of my favourites, too. On a press of F, she’ll pop down a wibbly red totem that heals me and my teammates, while also damaging any enemies that step inside its unholy confines. It’s less directly offensive than some of the direct-damage abilities boasted by some of her peers, but I found that I was almost guaranteed a few cheeky off-screen kills by plopping down totems at choke points whenever my cooldown expired, while also keeping my teammates (and myself) in fights for a few more seconds.

Some abilities are riskier but offer more reward. Clutch’s active ability is a two-stage affair, deploying first a shield to soak up frontal damage, before a second tap of F unleashes a forward-firing laser that’s as powerful and accurate as QC’s lightning gun. In the right hands, the move lets Clutch weather the storm from incoming attacks before unleashing laser doom on his would-be attackers. Canny opponents will just wait out the shield, though, holding their rockets until the the ablative effect has worn off.

Others still have all the risk but much less of a reward. Strogg is Quake Champions’ new boy, having joined the game in April, and his ability is Peeker: a hovering death drone equipped with its own machine gun and self-destruct mechanism. Peeker can fly, giving it some unpredictability to attack angles, but wielding a fairly piddly weapon, it’s underpowered in head-to-head combat against most opponents. Its self-destruct attack, too, is underwhelming, trading the continued maneuverability of the drone for some mild splash damage. Worst of all, Strogg is only semi-cloaked while using Peeker — too many times I got fragged by people down on the ground who’d spotted me in concealed form while my head was in the clouds. 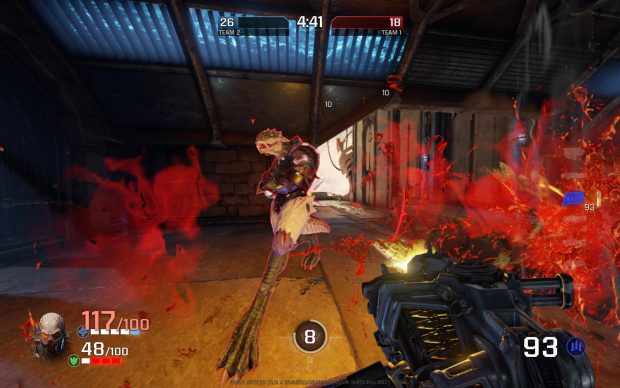 It’s certainly less useful than Visor’s piercing sight, which lets the slab-faced cyborg spot enemies anywhere on the level for a short time — a sort of developer-sponsored wallhack that becomes monstrously powerful when combined with the quad damage pickup. For his active, Blaskowicz can dual-wield weapons, pulling out a duplicate gun from somewhere inside his combat fatigues. It’s an active ability that — like Visor’s vision — just makes him better than other characters in firefights: a sensation at odds with Quake’s strict railgun meritocracy.

These abilities are the justification for bringing Quake back from the ‘90s, their inclusion making the aging series relevant for a new business model and to a new (or lapsed) audience. Come proper launch, Quake Champions will be free-to-play, with new champions and cosmetics to change their appearance purchased for real-world cash. Those cosmetics run from serious to silly — from functional backpack to shambler hat — and have no impact on the game itself. I do like the way QC handles duplicate items, though, offering additional add-ons to existing armour pieces if you’ve unpacked the same one before.

Characters are more of a draw, and as of June, can be unlocked permanently with in-game currency “favor” — earned by completing matches. It’s a fairer system than the previous one, which let players rent champions for in-game currency but only buy them with real money, but it takes 250,000 favor to unlock someone new, amassed over several hours of matches. I decided instead to unlock all of QC’s heroes wholesale as part of the game’s Champions Pack, picking it up while it was on offer earlier this month for just over £13. That felt like a fair price, but I don’t think I’d have stumped up the full cost if it wasn’t for the sale, and certainly not if I hadn’t snagged the full game for free during Bethesda’s E3 promotion. 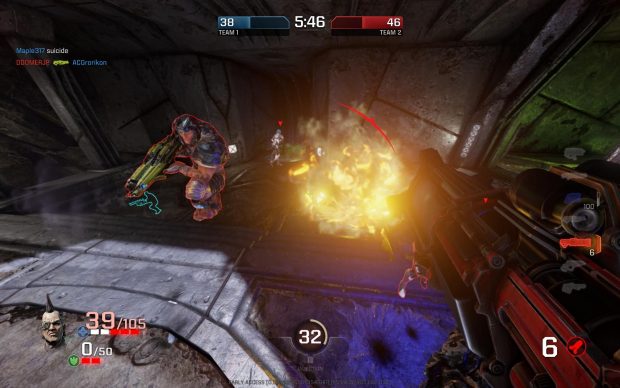 That’s in part because I know the publisher plans to launch Quake Champions as a fully free-to-play game in the future, but also because I feel like I wouldn’t be missing huge amounts were I restricted to free characters like Ranger and Scalebearer. Active abilities are a neat concession to 2010s game design, but where Overwatch is built on the interplay between very different heroes and their very different abilities, Quake Champions’ passives and actives are the icing on the gib cake, responsible for far fewer kills than standard weaponry. The bloody heart of the game remains the balance between rocket and railgun, between blisteringly fast bunny hoppers duelling high above tight and tuned levels.

That heart still beats strong, despite a few minor letdowns in sensation, both in movement and gunfeel. The railgun is as dangerous as it ever was, but it’s now long and anonymous looking where it was previously stubby and iconic, and its new firing pattern lacks Quake 3’s metallic twang. The rocket launcher, too, spews slightly underwhelming payloads. The rockets do the business against enemies, as the damage numbers that tick from their heads show, but their explosions blossom softly, bouncing opponents around the map like a gentle breeze. The lightning gun, too, feels a bit flimsy. It’s almost too good in application, burning champions down in just a few seconds if you’re able to keep the beam on target, but it’s more like it’s firing a particularly targeted Maglite beam than a line of concentrated electricity.

These are minor problems, but they’re the kind of irritations that will rise up and rankle after 20 years of any relationship. Quake is such a known quantity that it’s easy to tell when its railgun isn’t quite right, even if it can still turn a six-foot lizard into 20-odd globs of red goo from across the map. More annoying are the lengthy loading times that plague the still-early-access version of Quake Champions I was playing. Initial boot-up takes an age, and getting into a game isn’t a quick process either — both bad things for a twitch shooter that should thrive on the whims of players who want to load it up for a quick scrim or hang on for one more game. 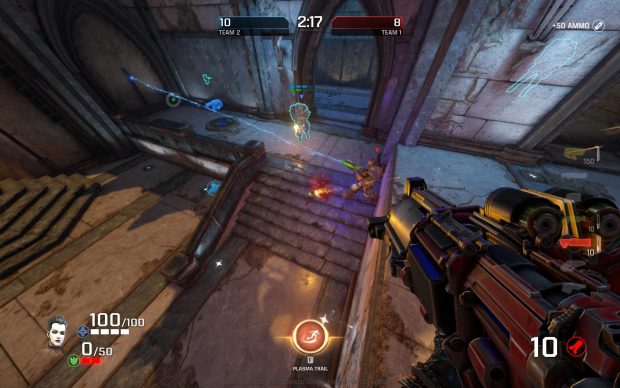 Worse still in my experience were matchmaking queues. I wasn’t even able to finish my 10 placement matches in the comparatively well-trafficked ranked 2v2 team deathmatch mode, incapable of getting a game going even after 30 minutes or more of matchmaking. While it should be noted that I play my games on Asian servers, and that European and US player counts should be higher, I’ve seen similar complaints from players based out west, and it’s not clear whether it’s the result of low early access player counts or just a dodgy matchmaking setup. The introduction of bots is welcome and curbs this delay slightly, but they're much stupider than human opponents, and make for unsatisfying rocket fodder.

It’s on developer id to sand off these sharp edges in transitioning Quake Champions from early access to full release, but they have already shown a willingness to buff and nerf characters where applicable. That’s a good sign: in a climate where other old-school shooters, like Boss Key’s LawBreakers have withered on the vine, Quake Champions will be dependent on a healthy community to keep itself relevant.

But at the moment, id’s game makes a good attempt at pleasing players both old and new: borrowing enough from modern shooters to keep it interesting, not gouging with its free-to-play elements, and offering a pedigreed throwback for people who yearn for the halcyon days of the late ‘90s — when jeans were baggy, when metal was nu, and when twitch shooters were on top.