Folks, I think we're going to have to let Half-Life go. It's been over a decade since Valve did anything with the license (beyond cross-promotion deals), and the seemingly posthumous leak of the sequel's planned story beats cemented the sense that the series wouldn't be returning any time soon.

Seemingly disinterested in using it themselves, Valve have been approving the use of the Half-Life setting and assets (if not the name) for use in commercial fan-works, Hunt Down The Freeman feels like it might just be the last nail in the coffin for the series, if public response thusfar has been any indication.

Of course, this isn't the first case of Valve officially authorising Half-Life fan-works for commercial release on Steam. On top of the excellent (but still unfinished) Half-Life 1 remake Black Mesa, we've recently seen the likes of mod-turned-commercial release Prospekt. Hunt Down The Freeman from Royal Rudius Entertainment is one of the more ambitious commercial fan-projects to date, promising a full length campaign set in between Half-Life 1 & 2 propped up by a bevy of fully voiced pre-rendered cutscenes. Sadly, this seems a case of overreaching beyond the developer's means in excess of even the deliriously wonky EYE: Divine Cybermancy.

While I don't have a review copy of it to dig deep myself, I have watched a fair amount of Hunt Down The Freeman being streamed, enough to get a rough measure of its qualities. Visually, it manages to look a few years behind the original release of Half-Life 2. Despite attempting to leverage some of the fancier visual effects only available in later iterations of the Source engine, the world of Hunt Down The Freeman is full of oversized, under-decorated corridors, industrial-scale buildings with nary an item of clutter to define the space, and outdoor segments featuring terrain that manages to be blurrily textured and awkwardly angular in equal measure.

Mechanically, there are some ideas here that seem nice on paper, but are executed poorly. In attempting to portray the short but doomed defense that Earth's militaries put up against the Combine, almost every encounter appears scaled up haphazardly, with dozens of AI combatants on both sides, firing wildly. When not accompanied by a gaggle of NPC minions, the player has to contend with similarly up-scaled hordes of zombies and headcrabs. On top of that, the game attempts to make gunplay more realistic through a minimalist HUD, an absent crosshair, and a requirement to aim down each weapon's sights for any kind of accuracy, a decision seemingly at odds with the increased enemy density.

All of this would be bad enough by itself, but among the litany of complaints from those who have played the game is that it's more than a little buggy, frequently crash-prone and generally unpolished. The developer has issued a confusing yet broadly apologetic statement, opening with a claim that they were forced to release by negative press coming from Half-Life fans dissatisfied by what they saw of the game during development. They go on to claim that the game that they (and we) are now seeing through other player's streams and videos is not what they believe they have on their development machines. 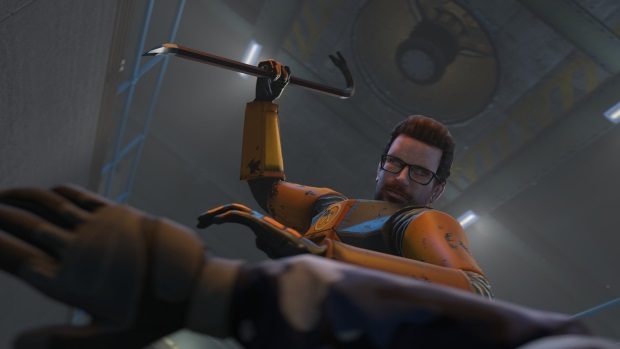 This bizarre claim is followed up by a suggestion that some error in file organization may have put an unfinished build out into the public's hands, which would be a more convincing argument if they weren't already incrementally patching the version that was just released, directly addressing some of the more glaring faults pointed out by players. Royal Rudius Entertainment go on to state that 'We will release the actual version of the game we were supposed to release'. If they do, we'll be the first to let you know, but somehow I find myself skeptical.

Hunt Down The Freeman is available to buy on Steam for £19.49/$25, minus a launch discount, but you probably shouldn't.