Super fast NVMe SSDs are still pretty pricey compared to your standard SATA drives, but thankfully there's a growing number of budget NVMe SSDs that are starting to bring those lighting fast read and write speeds to the masses. I've already tested the excellent value for money WD Blue SN500 and Adata XPG SX6000 Pro, but now I've got the Crucial P1 in for testing, which is just a smidge cheaper than the SN500, and is also available in a handier 1TB size capacity. Does it have what it takes to make it onto our list of our favourites, though? Here's wot I think.

Available in 500GB and the aforementioned 1TB sizes, the Crucial P1 is pretty much neck and neck with its WD and Adata rivals when it comes to overall price, as you can see from the table below (or at least it is in the UK). However, its superior random read and write speeds make it a much better choice for those after a larger, but still vaguely affordable NVMe drive for storing your games on.

For me, random speeds are much more important than the sequential speeds you'll see quoted on the box of an SSD, as they're usually a much better indicator of how a drive will perform in day to day desktop tasks. After all, SSDs hardly ever read or write files in nice, neat adjacent blocks, which is what sequential speeds measure. Instead, they scatter bits of data 'randomly' all over the shop, which is why random speed tests are the key thing to pay attention to.

In AS SSD's 1GB random 4K test, for example, which reads and writes 1GB's worth of tiny 4K files all over an SSD's storage banks, the 500GB model of the Crucial P1 I was sent for review managed a random read speed of 55.4MB/s, and a random write speed of 147.3MB/s. That's a respective increase of 25% and 12% over the WD's 44.5MB/s read and 131.3MB/s write speeds, putting it right up there with our best NVMe SSD champ, the Samsung 970 Evo (whose 500GB model still costs a whopping £95 / $90). That's impressive for an NVMe SSD that's practically a third less expensive than the gaming SSD top brass, and will no doubt feel just as nippy in day to day use as its more expensive rivals. 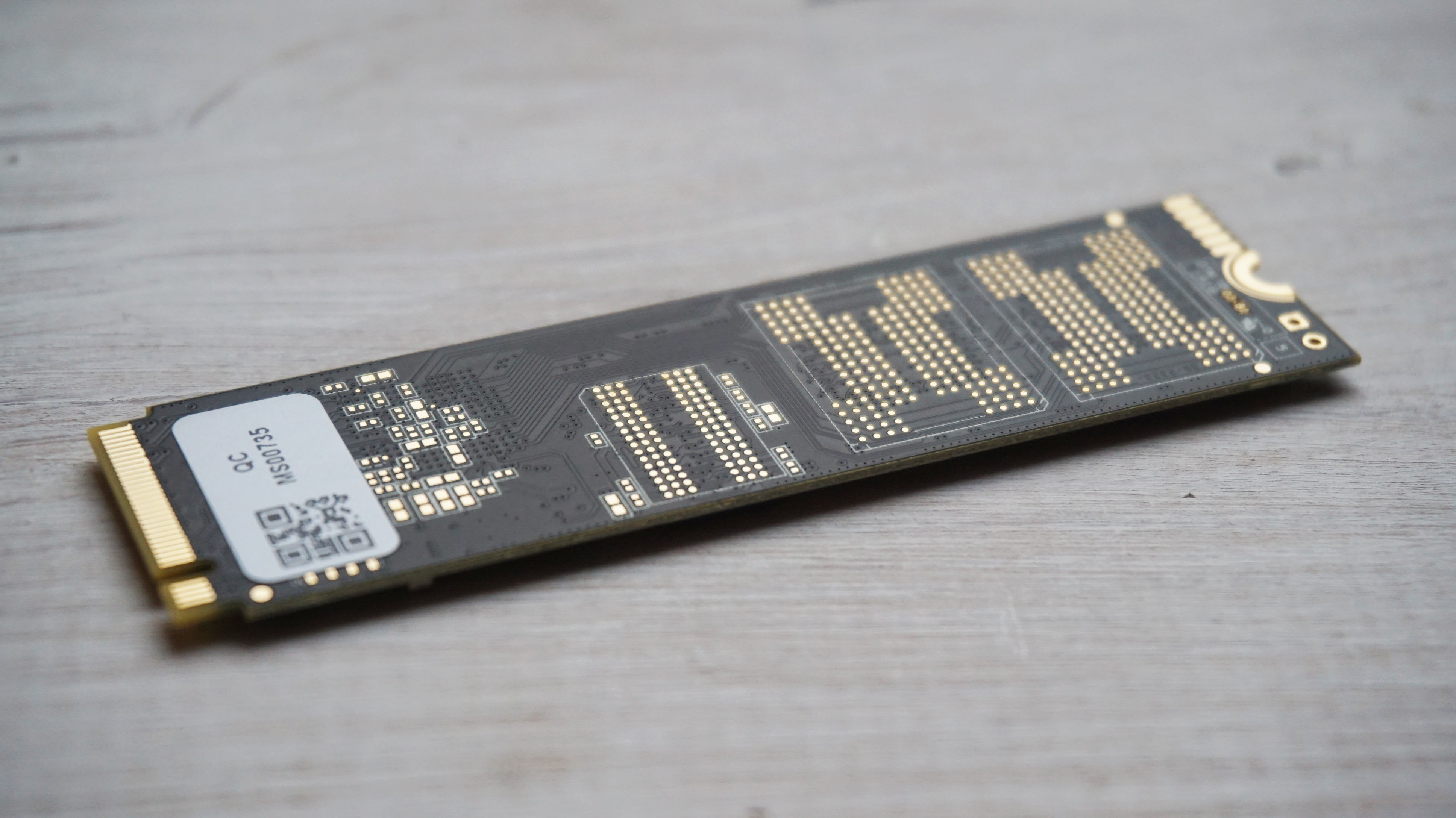 For gaming and daily desktop tasks, then, the Crucial P1 has its budget rivals beat. However, there are some a couple of downsides to the Crucial P1, especially if your PC regularly deals with large workloads when you're not using it for playing games. When I ran it through CrystalDiskMark's more intensive 1GB random 4K 8-thread-8-queue test, for example, the P1 only managed a read speed of 363.1MB/s, and a write speed of 911.4MB/s. And yes, I ran the test a second, and third, time, just to make sure it wasn't a mistake, but alas, I got similar results every time.

The former is particularly poor, as the WD Blue SN500 managed just over 1000MB/s in both cases, while the SX6000 Pro came in with 1248MB/s read and 922MB/s write. Indeed, a 360MB/s random read speed is more what I'd expect from a traditional SATA drive in this kind of test (Crucial's own MX500 SSD managed 398MB/s, in fact), so it's likely to feel a lot less nippy if you're often dealing with lots of files.

The Crucial P1's transfer speeds left a lot to be desired as well. For example, when I ran AS SSD's copy benchmark, which measures the transfer rate of three different file types (ISO, programs and games), the P1 only managed 779MB/s for the game part of the test, which is significantly slower than any other NVMe SSD I've ever tested. That's still around twice as fast as a SATA drive, thankfully, but when you've got WD's Blue SN500 managing 1454MB/s in the same test (and the SX6000 Pro around 1041MB/s), I suspect the P1 will once again start to feel a bit sluggish when you're dealing with files that are a mix of large and small.

That puts the Crucial P1 in a rather tricky position. For everyday tasks, the £64 / $67 P1 is almost certainly the budget NVMe SSD to buy out of the WD Blue SN500 and Adata XPG SX6000 Pro, but if you're going to be using it for transferring or moving big files around quite frequently, then you're probably better off sticking with the 500GB WD Blue SN500.

For those after a cheap 1TB NVMe SSD, however, I reckon the £99 / $96 P1 still represents pretty good value for money, especially when the WD isn't available in this size, and the Adata is so much more expensive. The P1 has its flaws, sure, but at this kind of price, it's by far one of the cheapest ways to take advantage of what NVMe drives have to offer, and for the most part it's still considerably faster than what you'd get on a standard SATA drive. Its endurance rating isn't as high as other drives (coming in at just 100TB written for the 500GB model and 200TB written for the 1TB drive), but you still get a five year warranty with it, plus those excellent small file read and write speeds. The P1 may not be completely perfect, but at this price, it's well worth considering for those on a budget.