Counter-Strike: Global Offensive has never been all that interested in world-building. It's an esport: the pro players are the real characters, inhabiting faceless Terrorists and Counter-Terrorists in high stakes matches where every bullet counts. Operation Shattered Web mixes things up, bringing a host of new player skins with CS:GO's first-ever battle pass. Now, you can stride through time-worn battlefields as a gruff n' tough special-force veteran or notorious global criminal of your choosing.

Unless you want to be a woman. There's only one of those.

For £12/$15, Operation Shattered Web offers up a reward structure familiar to any Fortnite or ApeLegs aficionado. Each week, you complete objectives to gain stars, slowly unlocking levels for your pass that drop tantalising cosmetic rewards.

Pass challenges range from the benign "Get X kills with a certain weapon on this playlist" to the more absurd "Recover a sample of the Danger Zone virus from the Phoenix Laboratory". These will affect all of CS:GO's game modes, including Danger Zone, Guardian, Casual and Competitive play. The latter is a little shocking, mind. I can't imagine the hardcore ladder-climbers will be too happy to be teamed with loot-hungry players gunning for 15 pistol headshots.

Unfortunately, Valve are still quite attached to random chance. Rather than unlocking individual items, you'll be unlocking a randomly-selected cosmetic from its collection.

Bafflingly, there are even a few regular locked weapon cases (loot boxes) scattered throughout the pass. Please, I'd just love to pay money to unlock the opportunity to pay even more money.

Valve have been toying with battle pass styled "campaign" systems in CS:GO for years. Previous Operations would often give you a campaign map to work through, moving along point-by-point by completing objectives in-game. Rather than unlocking some nice gun skins or a shinier Operation coin, though, Valve have opened the cosmetic floodgates with this more traditional pass.

One of Shattered Web's biggest new changes is the addition of player skins (ahem, Agents). This has inadvertently added a whole heap of lore to Counter-Strike's sterile shootouts. Terrorists are now malicious members of "Phoenix" or "Sabre", Bond-esque ne'er-do-wells with an ideology-free knack for destruction. Agents range from light touch-ups to the game's current masked gunmen to grizzled bastards with big coats and bigger beards, sporting names like "Blackwolf" and "'Two-Times' McCoy". Master Agents, the rarest sort, even come with their own voice lines and end-of-match animations.

They've even managed to fit one entire woman in the Agent lineup. Bloody hell, Valve, slow down there. 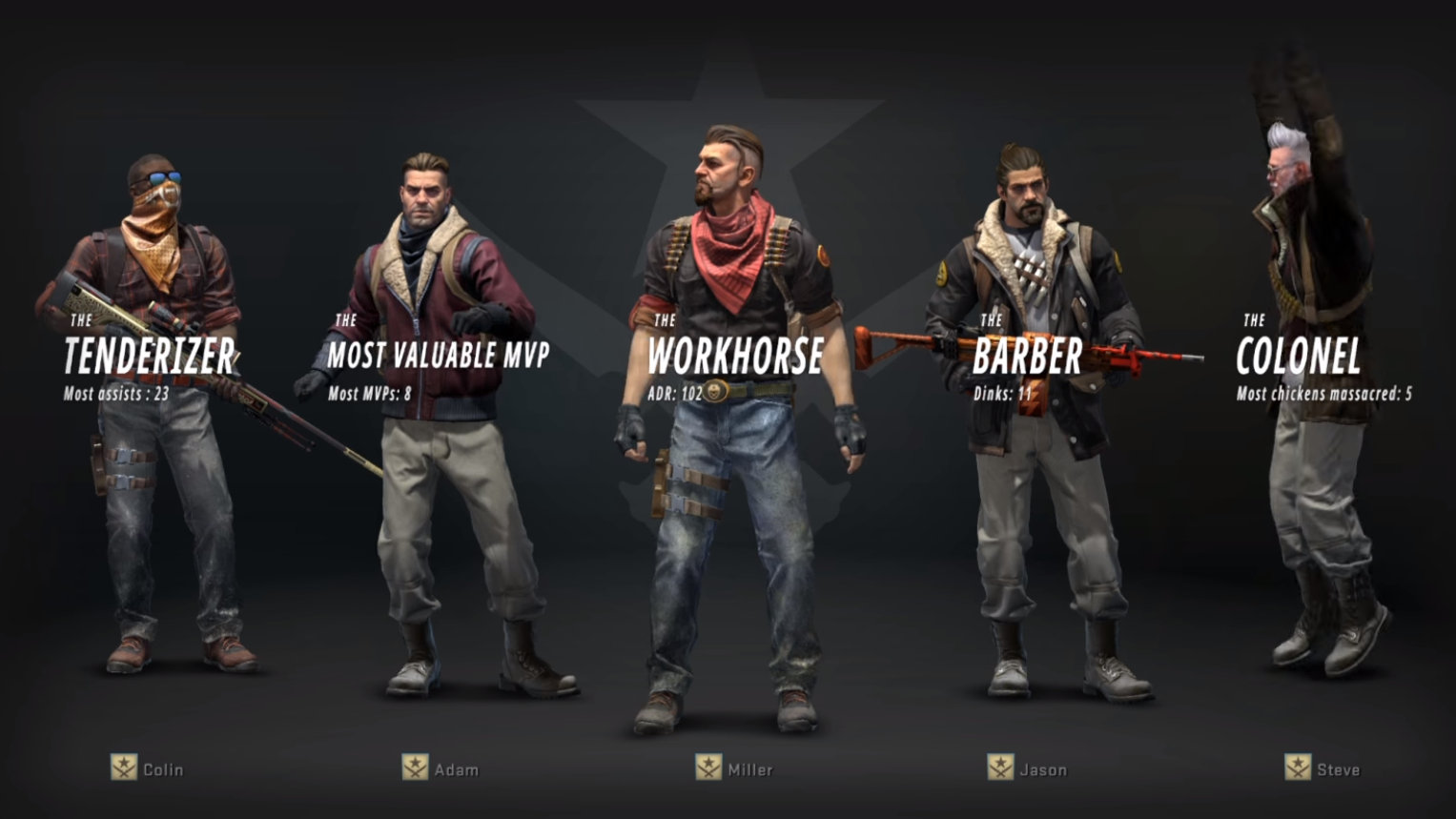 If you've not equipped one of these dapper chaps, you'll be assigned the default character model for the current map. At the end of each game, you'll also get a nice little wrap-up screen of your crew, with the game assigning little titles like The Workhorse, The Barber or The Tenderizer for teammates who got the most kills, headshots, assists and such.

Of course, battle pass rewards also include the usual slew of stickers, sprays, and weapon skins from four new collections: Shattered Web, Norse, St Marc and Canals. Tell you what, though, some of these artists have gotten awfully good at turning a killing machine into a canvas.

A full changelog for this update can be found on the official patch notes, while the Shattered Web update page contains a handy rundown on the new pass and incoming cosmetics.