Long term readers of my constant Sims 4 Simsposting will know that by far my favourite custom content maker right now is Ravasheen. Imagine my delight when I found out that, after three months of work and collaboration with another creator, Panda Sama, the pair have produced an extremely adorable tiny play kitchen for toddlers and kids.

Further long term readers of my work may also know that I am not the biggest fan of children (and in the game!), but in this case I will make an exception, because I tested some of the custom animations out with a sweet little toddler and he wore a little chef's hat and everything. I also got in touch with Ravasheen to ask her about her cc process, and how she got into making it in the first place, because I am obsessed with her work.

Like most of Ravasheen's work, the play kitchen has lovely attention to detail. It's built totally from scratch, is base game compatible, and even has custom animations for child and toddler sims that use it, as well as increasing skills for them. I'm not familiar with Panda Sama's cc, but you can bet I will be after this, because the play kitchen is amazing.

Impressively for the quality of this work, Ravasheen has only been churning out cc since February last year, when she uploaded a recolour of a canvas by PeaceMaker to The Sims Resource. "Back in the day, me and my siblings played The Sims on a burned copy from a neighbour," she told me over email. There followed a long break from Maxis' virtual world until 2017, when Ravasheen started playing again as a way to spend (virtual) time with her sister again. "None of us had heard of CC but we somehow stumbled on it. I immediately downloaded all of the CC possible, but it still wasn't enough."

After that first recolour, Ravasheen was "immediately hooked" and has been learning as much as possible since then. "I am an electrical engineer by day so I have experience in coding and modelling, but as I found out there was still a huge learning curve."

Ravasheen's favourite things to make are stylish and customisable, but functionality is most important. Some signature items that Ravasheen made very early on are the Don't Be Clothes Minded clothing rack, which is a functional dresser in game (and is also very pretty, and is a favourite item of mine). There's also the Couldn't Chair Less Sectional Couch, which she made because a sectional couch was something she really wanted, but found few options for. "Since that first modular set in my early cc days, I have really focused on making as many customisable pieces as I can," she added. 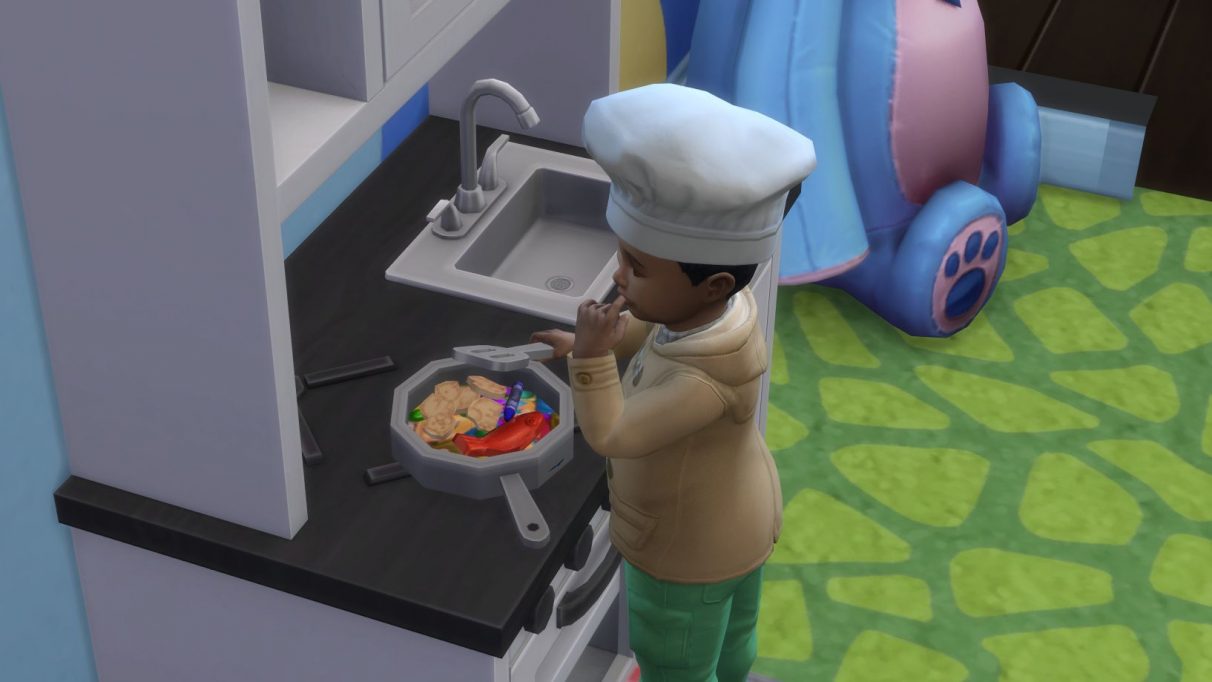 Thus, the Little Chefs Toy Kitchen comes in several colours (Ravasheen describes her colour palette as "grayscale mixed with blues and a good ugly yellow", but to make sure more options are available she uploads her photoshop files as a resource for recolour artists, who she describes as "the heroes, because they make so many more variations available for simmers").

This isn't the first time Ravasheen has dipped her toe into cc for kids, it's just that one idea ends up turning into many others. The now-infamous bunk beds were originally spun off from a kids room set. Then, when she went back to the room to make a matching bookshelf, she ended up making a set of modular cubbies, and a peg board for the kid's room became the Peg To Differ set

Praise be, then, that with Panda Sama this kitchen has seen the light of day, though probably spawned its own clutch of other projects in the process. Panda Sama "made waves", as Ravasheen put it, with her animated bunk beds, so this team up seems like a natural one. The animations on the Toy Kitchen are incredibly cute - toddlers build themselves a little step out of a pile of books, and while children can cook actual simple meals, toddlers can have a Pretend Cook action. They stir up a mix of crayons and wooden animal shapes, and create one of four possible toys as a result. Including this inscrutable moustachioed corncob. 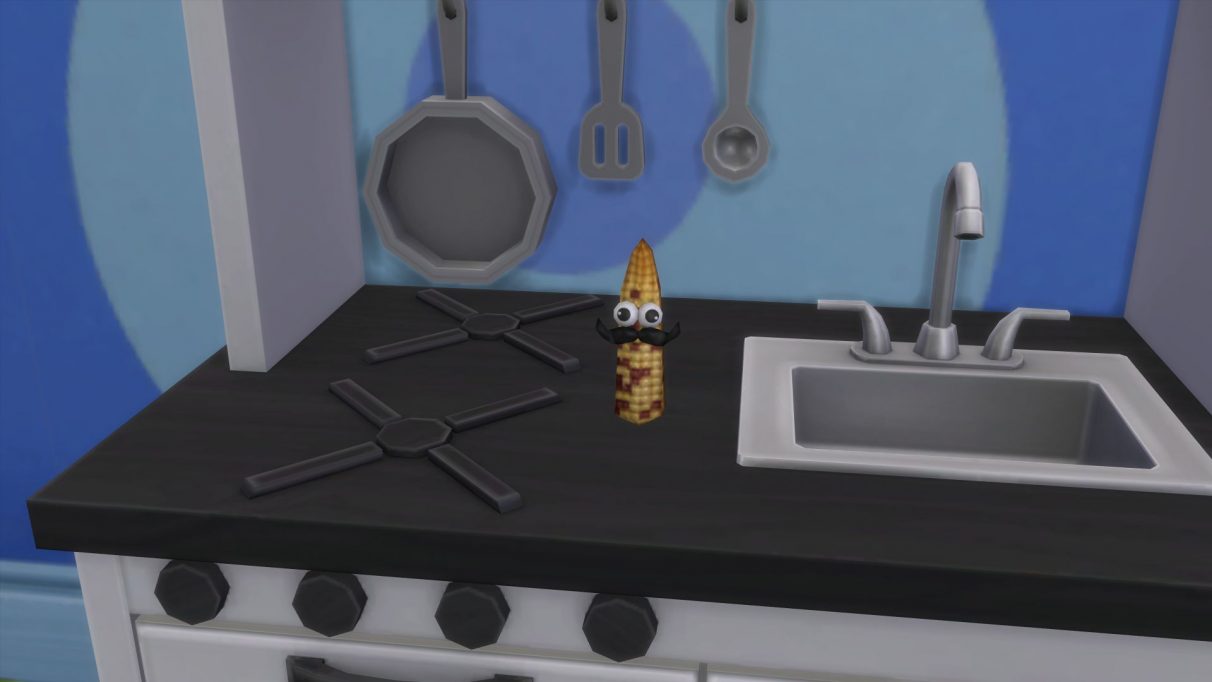 I love the cob.

This sense of humour is pretty typical of Ravasheen too, though. The most important question I asked was how she comes up with the amazing pun names for all her work. It turns out to be an extremely serious process.

"When I get close to completing a set I start brainstorming ideas," she explained. "If I can't think up anything on my own, then it is really a lot of entering phrases/words into google and browsing to see if anything sparks an idea. I will google 'sayings with _____' or 'words that rhyme with ______'." She even maintains a spreadsheet of puns that could be used on future pieces. "Sometimes I have sets that are completely finished except for a name and I hold off releasing them till I can think of something. So, truly, I am glad people appreciate them cause I really do put a lot of thought into them."

I do appreciate them! And I appreciate cc makers like Ravasheen even more. They put a lot of time and love into making all this bonkers cool stuff for the players, for free, and it really elevates The Sims 4 into a game that I want to keep playing. More than the official DLCs, it's the infinite variety and creativity of custom content that draws me back. I mean, no disrespect to the actual developers. But would they have put out something like the cob? 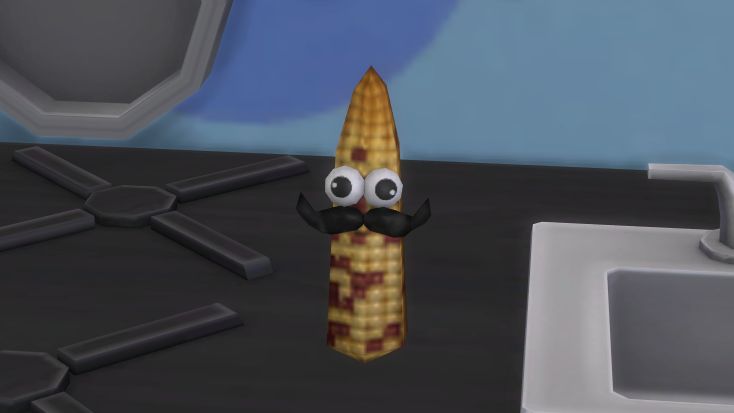 My instinct says no.

The Little Chefs Toy Kitchen is out now for Patreon supporters of either Ravasheen or Panda Sama, but will be unleashed free to the world on October 17th. For more on The Sims 4, check out our PC cheats page.