Jumping off buildings and stabbing Romans is all well and good, but wouldn't it be nice to command a phalanx of turbo-charged hippos? While its official season pass may have ended recently with a nice chunky expansion, Assassin's Creed Origins is still growing. Its next update is putting the power of the Animus control panel in your hands, allowing you to tweak and mutate the experience to your own whims, no matter how silly they may be.

Due for release at some point this month, the Control Panel is a new feature exclusive to the PC version of the game. It's a big panel of 75 variables, toggles and sliders that you can use to alter the game on a variety of levels. Feel like changing your playable character and their abilities? That's just the most basic feature here..

Via a new panel in the Uplay launcher, you can create new custom modes while outside of the game, share them with others, and activate them once you're playing. It's a big old-school cheat panel, in essence, although perfectly in keeping with the 'go anywhere, do whatever' approach that the historical tour mode introduced, albeit without the combat elements. Now you can wander around a fully murder-equipped world (with nude statues), should you see fit. 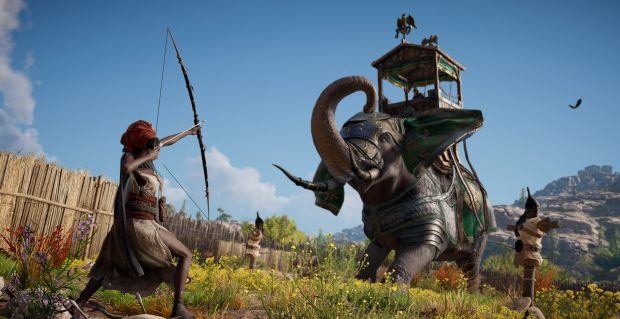 Ubisoft promise more information on the Control Panel feature soon, and the mode will be rolling out sometime this month, but the announcement page does give us at least a partial look at its powers and limitations. One screenshot of the panel shows us about a third of the options presented, allowing you to make tweaks to the hero model, base variables and your combat capabilities, as well as tune NPC senses, speed, fighting skill and so on. It looks like most of the sliders go up to a rather silly 500%, including the Maximum Tamed Animals slider.

I, for one, want to command a legion of animals against a never ending horde of hyper-fast, hyper-twitchy weaklings that can see me from a mile away. It'll be cathartic. Along with the announcement of the Control Panel mode, Ubisoft have announced that for the foreseeable future, the Trials of the Gods (the big boss battles against Animus glitches represented as Egyptian deities) will cycle on a weekly basis, with this week featuring Sobek on Normal mode, and Anubis on Hard.