I spot the man seconds before my flare fizzles out. It’s dark - so dark that even though he’s just a few feet away, I can only tell he’s there from the condensation of his breath. My own breathing stops, thoughts racing behind a moment pregnant with possibility, a crossroads where anything could happen. “Hey”, he says. “Would you like my beans?”.

DayZ doesn't get more exciting than that.

At least, it hasn't got any more exciting than that recently. I’ve got some glorious anecdotes from years gone by, filtered through rose-tinted glasses that show nothing but the highlights. Not the tedium. Not the jank.

Roaming around DayZ's survival playground this past week has consisted of about 95% tedious jank, and 5% japes. Years ago, the jank was vaguely forgivable. It sheltered under the promise that at some point, it would be gone. 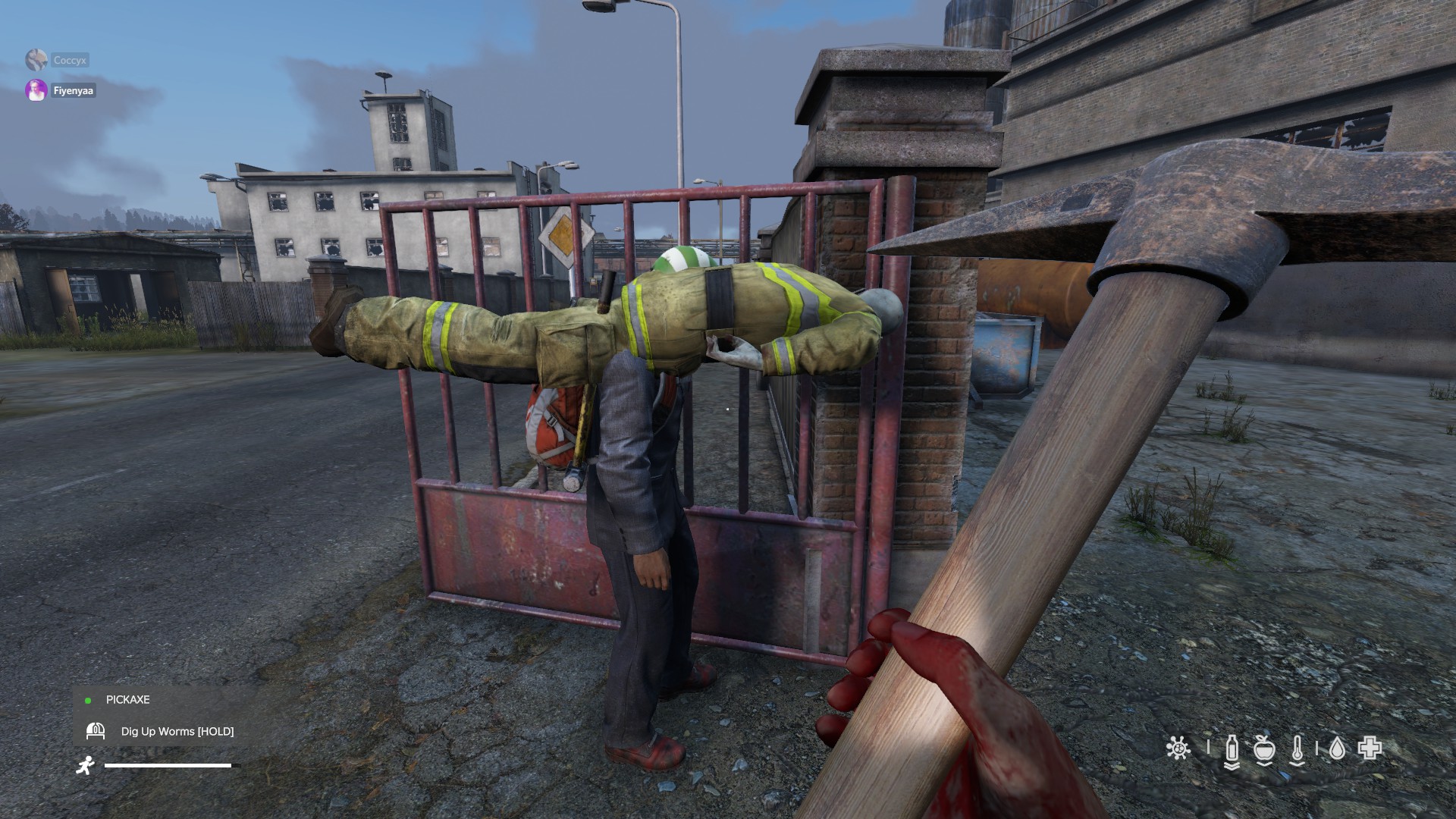 My new companion, it turns out, can’t figure out how to open his beans. I crack the can with my knife, slurp half the contents, and offer him the rest. He tells me to go ahead and scoff the lot, then asks if I want to head into town with him. I do, and begin to follow. Then the world breaks.

The server boots everyone out, including the friends I’d been hoping to eventually meet up with. We log back in, but wish we hadn’t. I’d stuck my hands in the air while exchanging barely visible emotes with bean boy, and on rejoining find that they are trapped up there. My walk slows to a snail’s pace. 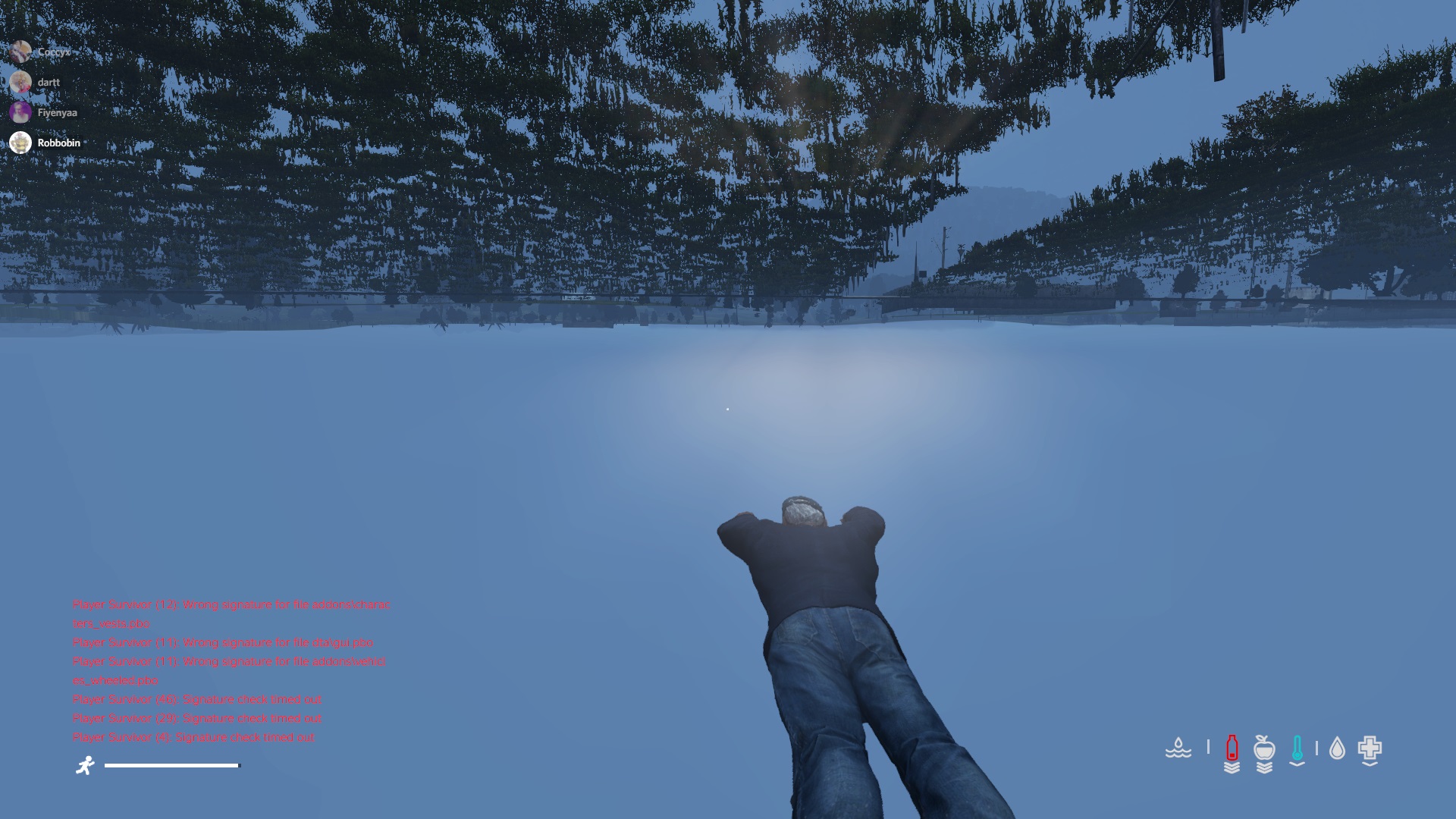 My friend Pete reports via Discord that he has fallen through the ground and is now stuck in some kind of undersea, which I soon get to see for myself. My other friend, Dan, informs us that a field has gone Blair Witch on him, dragging his avatar back no matter how far he runs forwards. I alt tab back in after noting that down, and find myself still in a sea - the normal one, this time. I have been constantly drifting to the left, and continue to do so. My hands are still aloft.

I should say, everything so far happened during a weekend when the servers were buckling more than usual, under the weight of far more players than they typically need to support. That weekend took us to peaks that I haven't visited since, but DayZ is still a mountain range formed from bugs. Zombies stutter to and fro, players clip through walls, and the independently clumsy inventory sometimes breaks and prevents me from changing what I've got equipped. 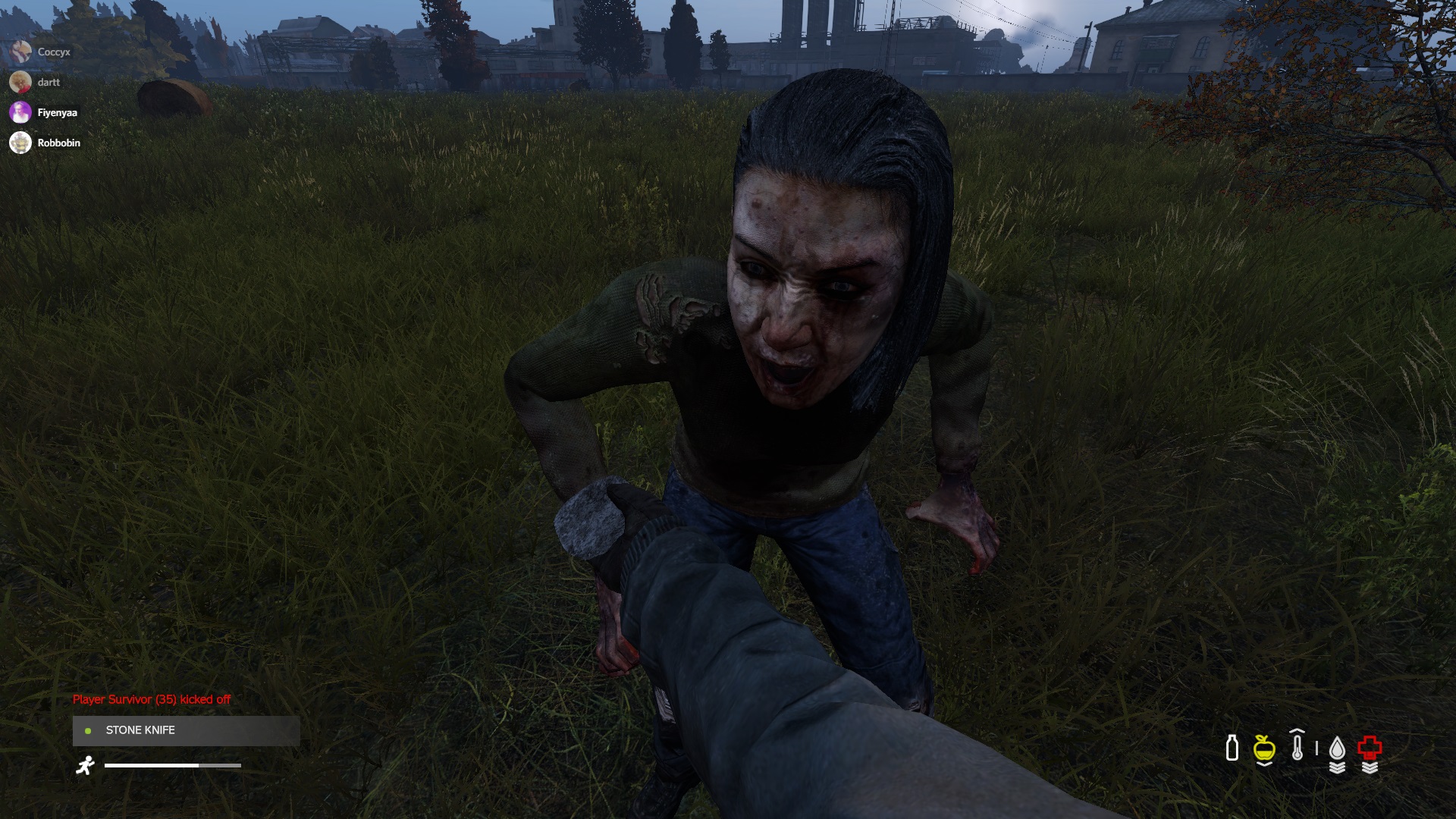 On a fresh server, I resume my quest to meet up with my pals. It's lighter now, but not for long. I spend twenty minutes following a railway, along with Pete's advice to keep the moon on my left. In what will become a recurring theme, it turns out we're both headed the wrong way and have been running in opposite directions. Two u-turns and thirty minutes later, we're all hopping about in the same train yard.

Meeting up in DayZ does feel a bit special. It's a moment that arrives after a long, lonely hike, a reward for overcoming a navigational challenge that no other type of game has ever asked of me. It's a brief intermission to the boredom, a rush of power that stems from having allies at your side in an uncaring, overly harsh world. 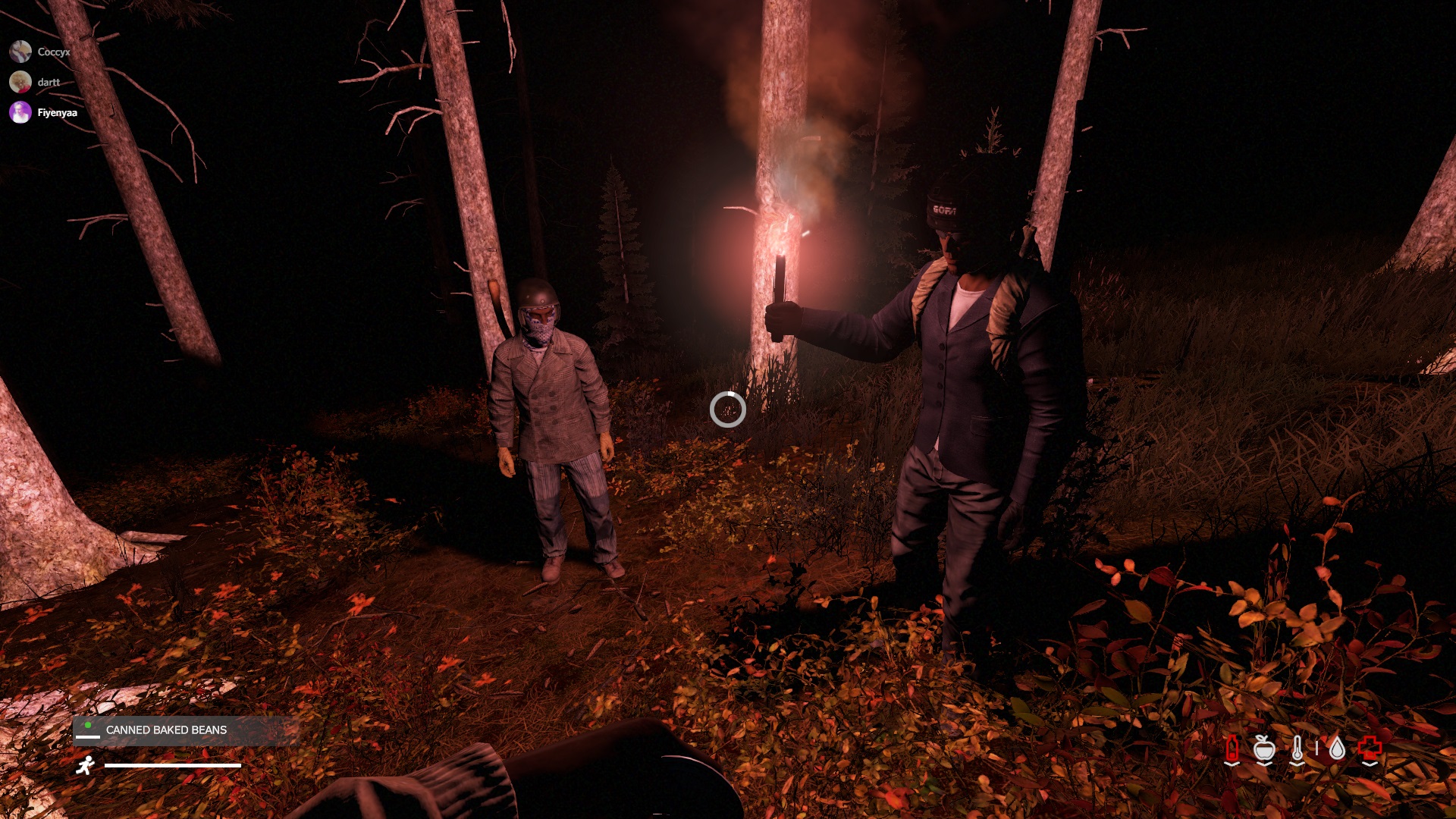 Pete has gotten us lost. It's dark again, and we're down to our last flare. The plan was to head inland, towards better loot. The reality was to stumble blindly through a forest, until miraculously bumping up against a fence. I'm dying of thirst and have to stumble behind, occasionally yelling for my fellow survivors to wait up. Daybreak brings us light, a village with a water pump, and a shotgun I'll never get a chance to fire.

We'd killed a fair few zombies by this point. Killing zombies sucks. Melee swings come down on undead flesh that judders about the screen, impacts that go beyond unsatisfying and into active frustration. It's like clobbering marshmallows that are moored in a different reality.

Shooting feels a little better, but still leans towards the functional: bodies don't drop like they should do, and the weapon sounds lack oomph. In any case, shooting isn't something you get up to much - shots are impractically loud, drawing zombies from a wide area. We only used our pistols once, and that was pretty much just for the hell of it.

But wait, you say! All this is missing the point! DayZ is a game about player interaction, the zombies mere set-dressing. Trouble is, I can count the number of players I've interacted with on one hand. A hand that's missing two fingers.

The server crashes again, forcing us to hop into another - and back into pitch blackness. We groan, then perk up at the sight of a flare. It's not ours. It doesn't seem to be moving - but we are. 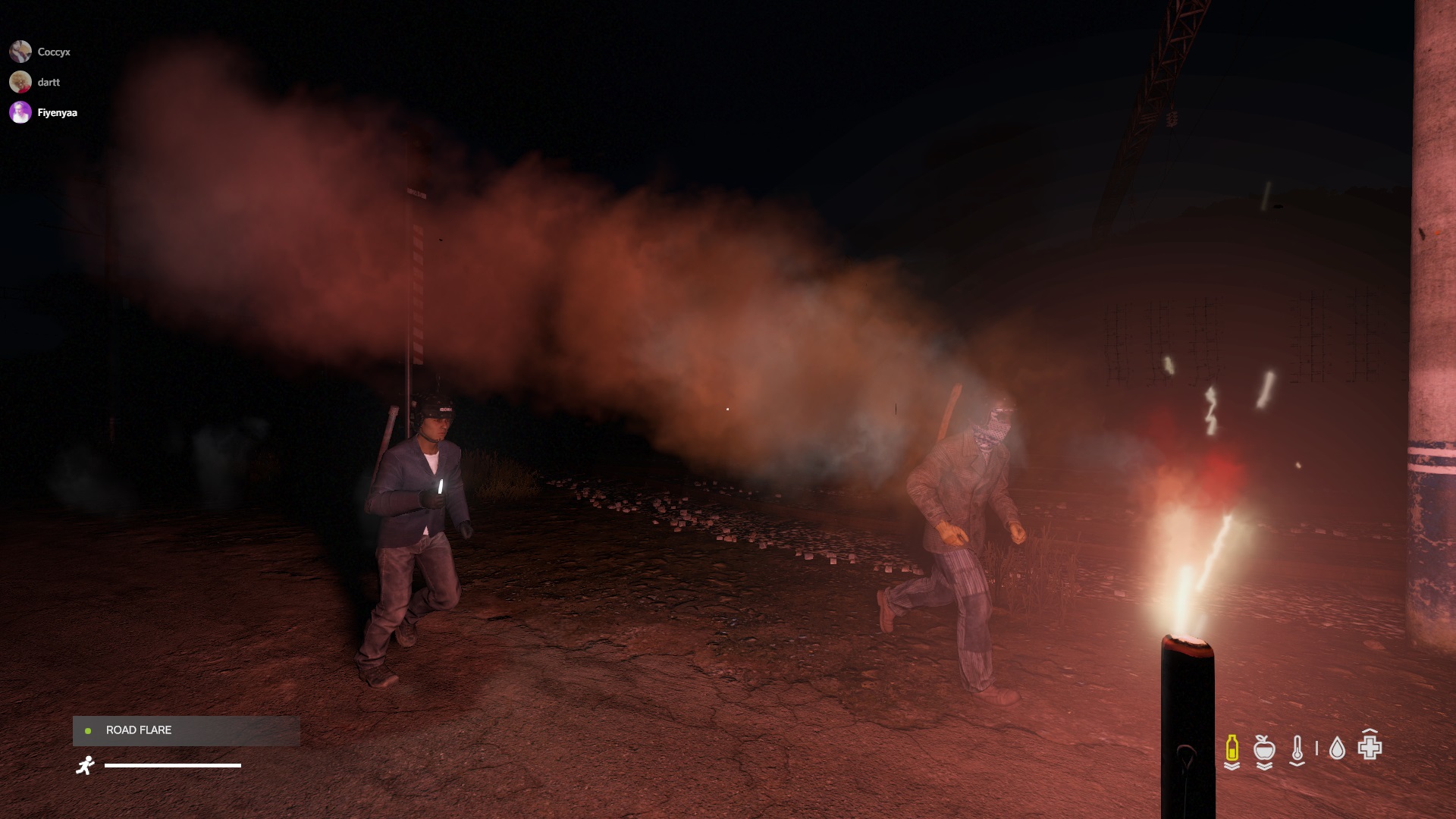 The flare vanishes, and we spend a few minutes blinking in the darkness. I call out, but get no response. We can't know, but we suspect the person saw us - and our guns - and just logged out.

I know DayZ can generate amazing experiences. I've had a few. Like the time my friend euthanized me after a bug trapped me in an eternal half-life, my screen black but my body undying. When I found him again, he'd turned into a bandit - a system that used to change people's appearances, marking them out as a player killers. That system's gone now, and anyone can throw on whatever clothes they find. I miss it. 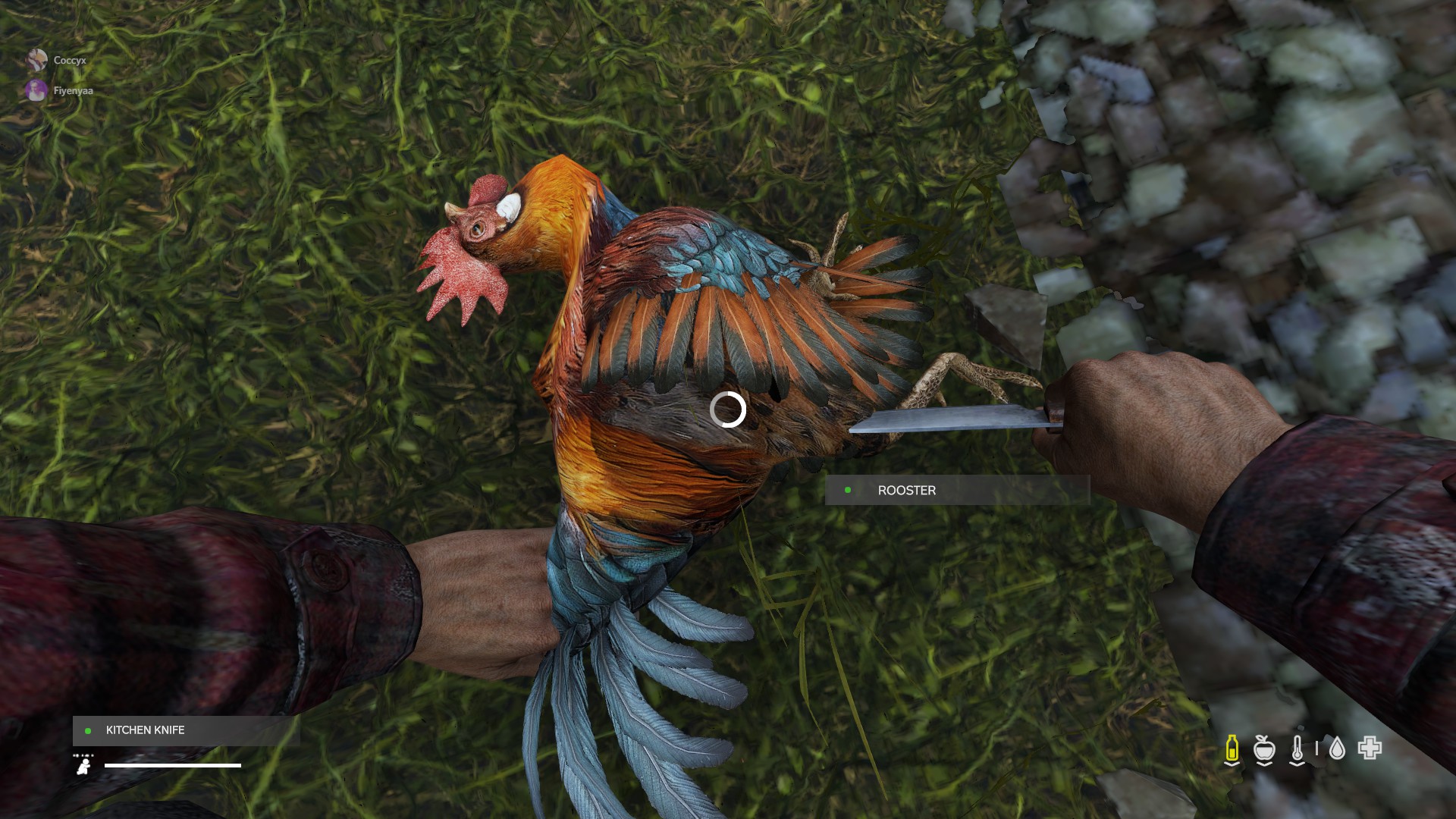 I even got kidnapped, once, by some friends of ex-RPSer Philippa Warr who convinced me they were strangers. They tied me up, fed me beans, and marched me through the wilderness. I spent the whole journey jabbering to Pip over Skype, who had no idea what her mates were up to. They made me relay a location and took me there, then told me to put my hands on my head and start walking down a hill. The moment when Pip recognised their voices will stay with me forever.

I can't say the same about anything from these past few days.

Me and Pete ploughed on, Dan having left us along with the free weekend. Pete logged in without me, and got shot by an assailant he never saw. I was flocked by a horde of zombies, a freak occurrence in a wasteland where they're normally scattered a ways apart.

We respawned. We looted and we hiked, picking our way towards a military base where Pete hoped to find better guns, and I hoped to find interesting people to tell you about. We did meet one person along the way, though all they did was follow us after declaring themselves friendly. After a few minutes, we turned round to see his corpse. I helped myself to his cooking pot. 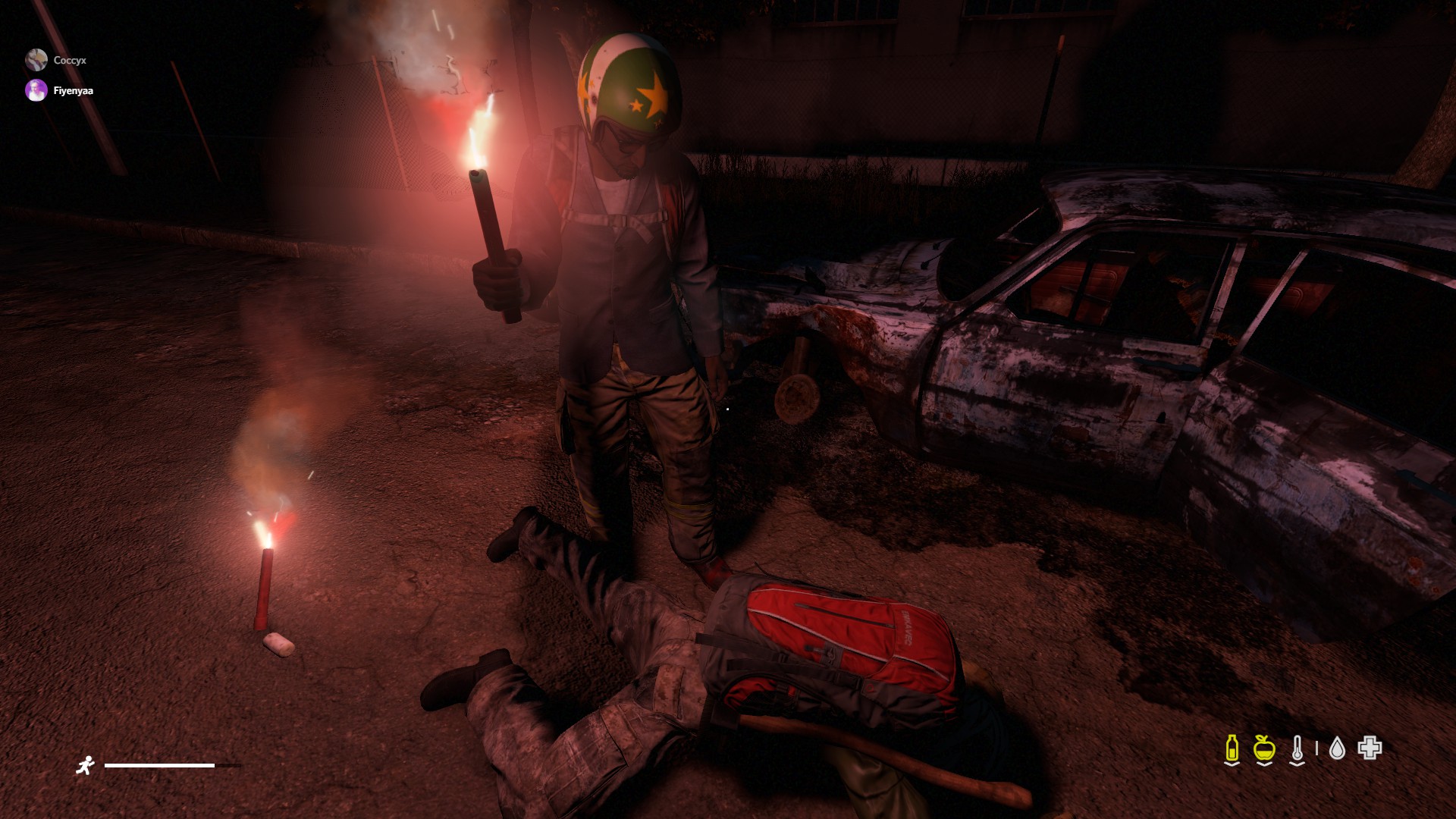 We never made it to the base. Pete went ahead and got shot from nowhere again, and I couldn't face the trip on my own. I'm not convinced anything interesting would have happened had I got there.

I remember Rezzed 2012. I remember listening to Dean Hall, the creator of the original mod who's long since moved on. I heard him talk about the DayZ of the future, of underground laboratories and player communities that would work together to find a cure. I asked him about the plans to add dogs, and was assured I'd soon have one by my side. I'm still waiting.

DayZ began life as a horribly fiddly, bug-riddled anecdote-generator with the potential to become something great. Five years on, it's still that - sans potential. At this point, it would take Panglossian optimism to imagine the bugs being swept away.

It has its moments. Stumbling on other survivors is a thrill, but in reality those encounters rarely lead anywhere interesting. DayZ is an anecdote-generator, but the odds are you'll need to feed it more hours of your life than they're worth.