I've been away for a few weeks - NOT THAT YOU NOTICED - and my poison of choice during that time was the release version of Dead Cells. This Metroidvania/roguelike hybrid ticks pretty much every box I've got going, leaving my former flames The Binding of Isaac, Hollow Knight and Slay The Spire suddenly abandoned.

Like all the best 'vanias, Dead Cells doesn't tell you much, content instead to let you dash yourself against its rocks time and again until realisation - or reflex - takes hold. I've learned a lot by now (and I've got even more left to learn), and my runs are very different to my early, faltering ones. Because of the way unlocks work in Dead Cells, there's a few particular things I wish I knew from the off - to the point that I'm even toying with a total restart. 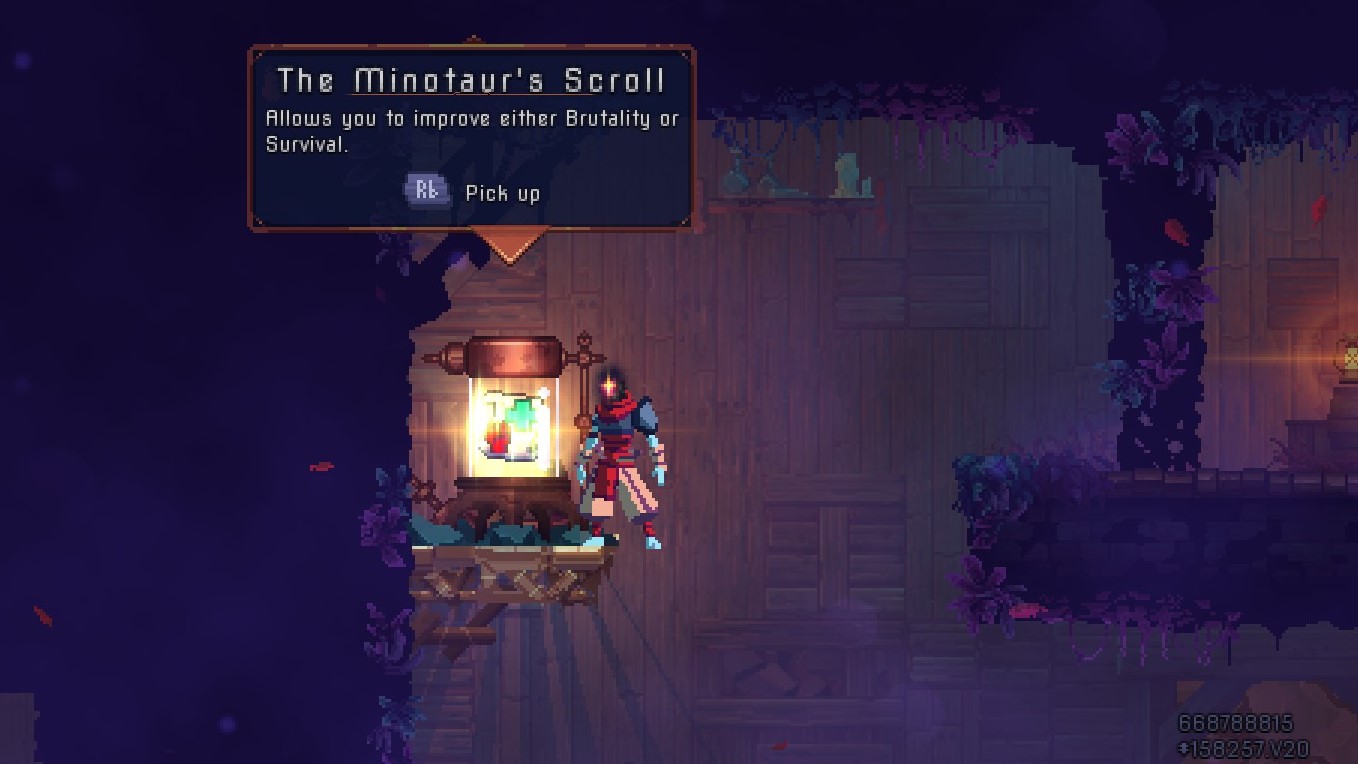 Scrolls are everyone's best friend - a big boost to the attribute (and, in turn, weapon) of your choice, and a chunky blob of new hitpoints too. Here's the bad news: they're not all they're cracked up to be. Every time you activate a scroll and revel in those boosts, every subsequent enemy gets their hitpoints and damage amplified too. Finding the line is thus bloody hard - you want to be tougher, but you're making the game tougher.

The vagaries of this is that stacking scrolls (presuming you stay the course of Brutality, Tactics or Survival as your main weapon) generally means that your damage dealt exceeds your foes' hitpoint growth, Keep it up, and pair with a tasty, smartly-upgraded weapon and you'll be one-hit-murdering most dudes eventually.

But, as we all already know, every time you use a scroll to increase Brutality, Tactics or Survival, you permanently reduce the hitpoint boost you'll get from the same attribute subsequently. Before long, the increase in enemy damage output exceeds your hitpoint gain, and you become horribly fragile.  This is doubly true for bosses, who can't be murdered with anything like the ease of a normal mob.

In other words, using a scroll isn't the great idea it appears to be. I wish I hadn't spent so many runs blindly increasing brutality time after time, unaware that those 15% damage boosts were making my enemies  more devilish. These days I split my vote far more, trying do cack-handed impromptu maths about which attributes to increase in which order to attain the maximum boost. 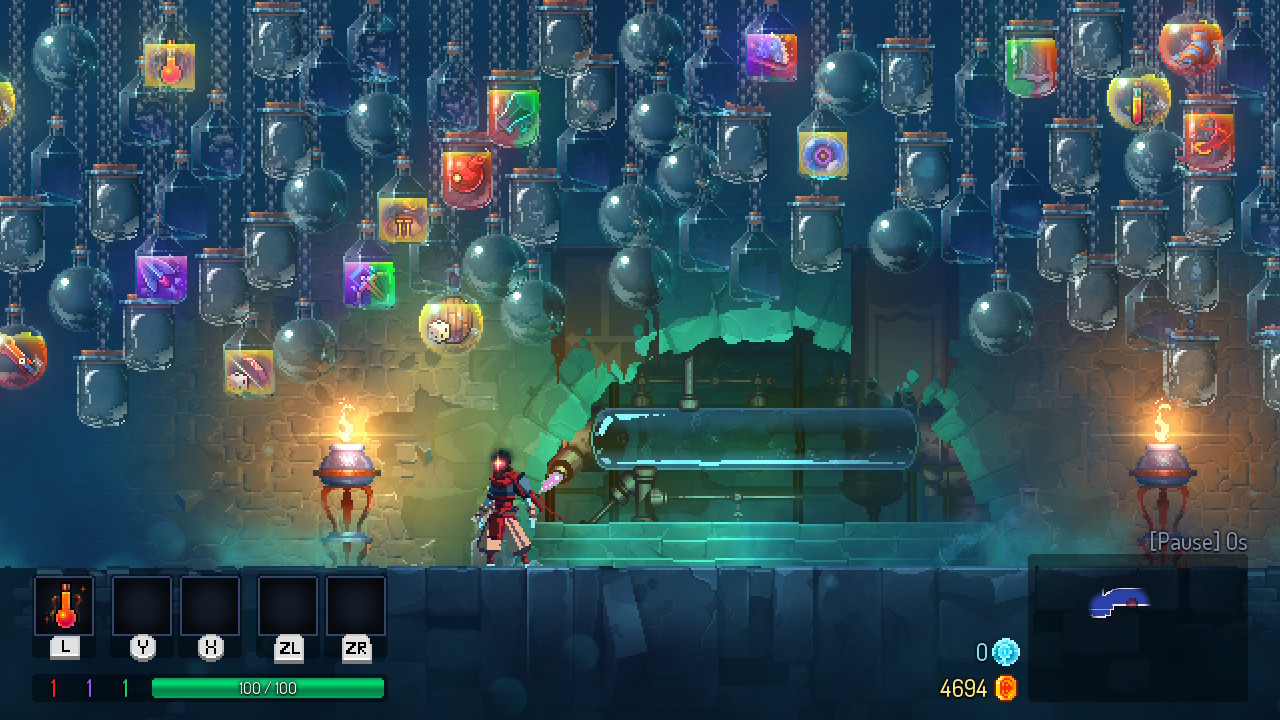 Well, depends on how you want to play / how long you've been playing. Conventional wisdom has it that increasing the range of weapons, shields and traps available to you by finding and then buying blueprints is all to the good. More choice, more potential.

The trouble is that a great many of Dead Cells' gizmos have specific functions - e.g. short-range bows, swords that do crits after a roll... If you have a favoured build (for me, it's an Ice Bow with a high DPS blade) but you unlock a load of Blueprints, all you're doing is reducing the chance that your next run will begin with gear you actually want. Sure, later on, once you're a pro, you'll want to experiment with all sorts of stuff and keep on your toes rather than have the same experience every time.

In the early hours, though, my advice is to not unlock every new Blueprint you find just because it's there. Limit it just to the stuff you know you truly want, and pour your Cells into global unlocks, such as more health potions, reserved gold or, especially, Mutations instead.

I've unlocked quite a bit of dross from early, scattergun play, and now I'm seriously considering a total do-over in which I grab only the stuff that doesn't make me sigh.

However, there's a flipside to the above. Try this: pouring all but one of the required Cells into several new Blueprints, leaving a roster of them just a step away from being unlocked. If, on your next run, you start off with dismal kit and don't find/can't afford anything decent to replace it in the first stage, all you have to do is lob one Cell at a Blueprint to get an on-the-spot 'free' upgrade.

Rushing can be good 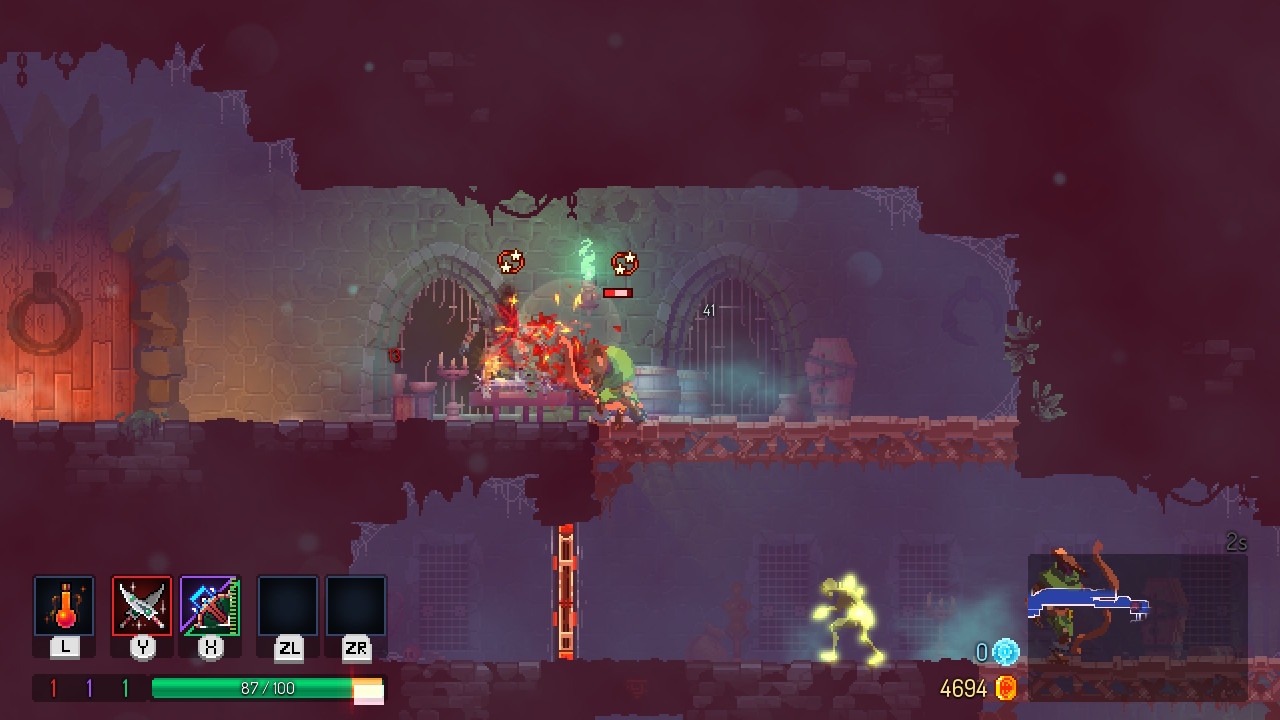 In those early hours, I meticulously combed each map for every last Cell, Scroll, weapon, chest and coin it held, determined that the more accrued, the more powerful I would become.

Soon enough, I clocked the timed doors in later stages - locked if you didn't reach them below a certain time threshold. So I hurried my next run to gain a look inside, but was left uninspired by the slim collection of Cells and a (that time) not hugely useful weapons on the other side of one. So I returned to my bad old ways.

However, increasingly I'm finding that the long-term results of rushing, and getting to the later timed doors, pay off much more. This works in tandem with the Scrolls point above - not scouring a stage for every last scroll can be to my advantage, as I'm not making the enemies quite so over-powered in tandem.

Early on, I'd figured the instant, big splodge of damage from a grenade was the best bet for mass-murder. These days, the only grenade I won't evict from the premises on sight is the Ice Grenade. Pure damage is the least useful trick in the Dead Cells book - a combination of bows or 'nades that freeze enemies in place and auto-turrets or floor-based sawblades that gradually carve away at one's foes is so much more effective. I live for the Cleaver and an Ice Bow. 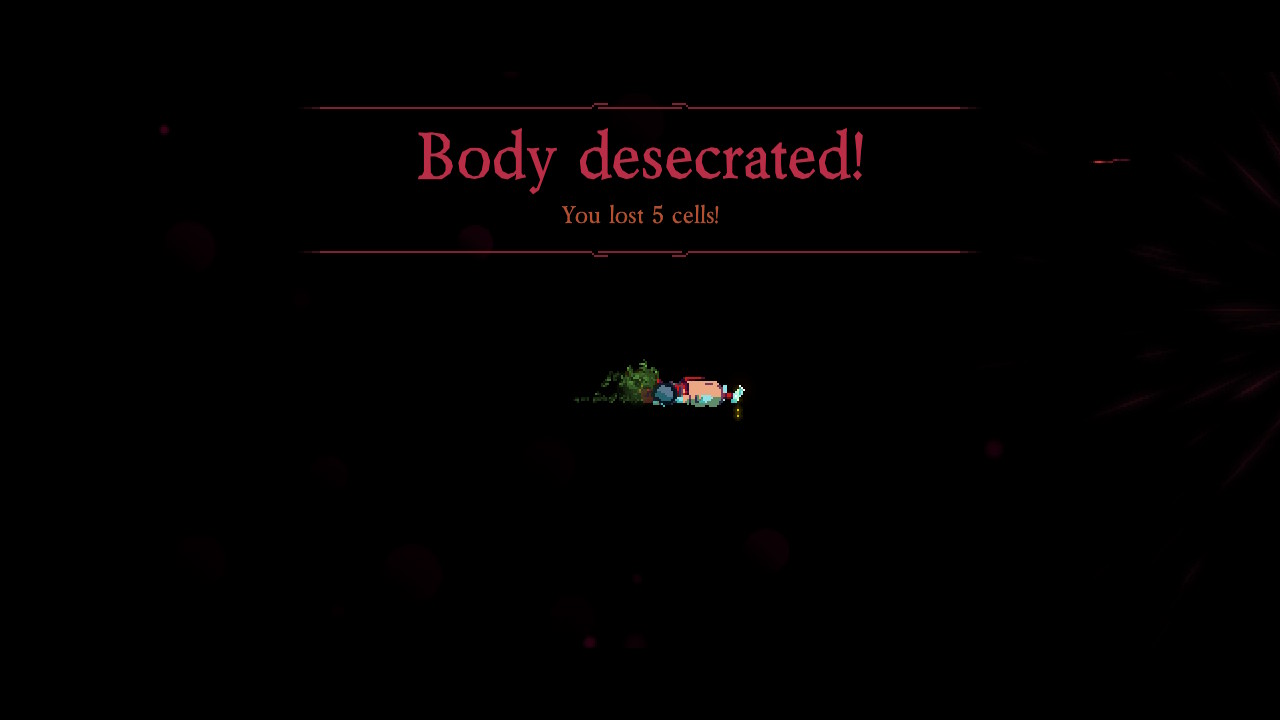 I pretty much ignored the Damage Resistance item attribute to start with. Taking a few fewer body blows is so much less interesting than arrows that set people on fire, poison blades or summoning a swarm of angry maggots, after all. But, alongside the dawning realisation that upgrading my character with Scrolls made enemies hit harder, Damage Resistance boosts became everything. The less glass in my cannon, the better.

Not every type of item can have a Damage Resistance bonus - mostly shields, bows and grenades. This complicates the kind of build I prefer, but if I find or reforge something with DR, that's what I'm sticking with, no matter what.

The Collector is a damned, dirty liar

I've gotta spend all my Cells with them before I can move on, they claim. Door's locked until that happens.

Nuh-uh. Smashy-smashy a few times and it will collapse, despite appearing to be one of those indestructible locked doors you find on the combat maps.

That means you can stock up Cells for a little later (though this is a high-stakes gamble - so much more to lose if you die), whether it's to pump more of them into the Forge and its permanent upgrades, or (as per 'Blueprints are good' above) to insta-spawn a newly-unlocked weapon or shield just ahead of a boss that requires a slightly different tactic from your norm.

The Forgotten Sepulcher is the worst 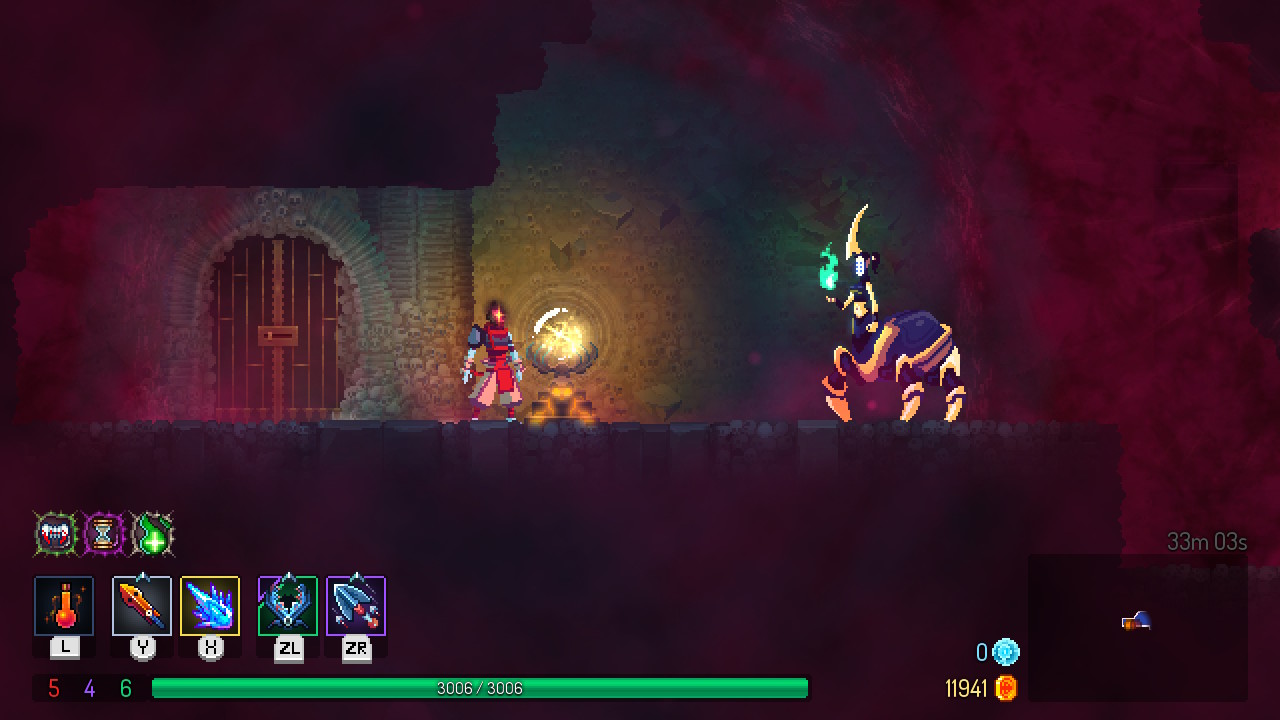 The absolute worst. Stay away.