Diablo 4 was revealed yesterday in a swirl of blood and grime and men talking about the lure of the darkness both in the trailer and onstage. I chatted with a couple of the developers about the new world they’ve created, the monsters they filled it up with, and their painterly inspirations. And I played a bit. It was surprisingly well lit.

That’ll be the work of lead lighting artist Sean Murphy, who said that their focus on the darkness in Diablo 4 is only “sometimes literal.” “We’re not afraid to crawl around in super dark dungeons [but] there are other types of darkness we’re into.”

Editor's note: Game announcements obviously aren't the only thing happening at Blizzcon this year. We've got coverage of the protests to come, but in the meantime you can read our previous coverage on Blizzard's on-stage apology and previous statement.

Monsters, for starters. The demo available to play on the show floor shows off an early part of the game, with a cavern full of the reanimated drowned to the north and the goatmen to the west. Dungeon designer Zavan Haroutnian explained that each area is supposed to feel horrifying in a different way. “The drowned are coming up from the sea and dragging villagers [back] to add them to their ranks...but the goatmen, they don’t drown people, they rip them to shreds and eat people. ...One is that gruesome, bloody thing, and the other one is just horrifying as a concept.”

The demo only lasts long enough to explore one area, so I opted for the cavern filled with the drowned. It is a gloomy place, though it’s hard to feel the press of the horror when you’re playing a constantly shapeshifting druid who feels essentially invincible even in the face of so many bloated corpses. (This was an early area, I was laden with health potions, and there is a hardcore mode coming, so I expect if you want to feel the horror, you probably can.)

I played the druid on Haroutnian’s recommendation; a barbarian and a sorceress are also available. “The druid is just rapid shapeshifting,” he explained. “It just feels so right...at a moment’s need, werewolf, bear, caster, werewolf, caster, whatever. You’re constantly jumping around the forms. That’s my favourite way to play, to make a build that has me constantly jumping around the forms and to build around that.” The druid does indeed jump between the forms in a very satisfying way.

Monsters aren’t the only darkness, though. “In Diablo 1 we had that dark narrative, even the tone of the world was dark and dreary,” says Haroutnian. “You’re gonna die eventually, but I guess you can try to fight evil off.” That’s carried through into the design philosophy of Diablo 4. The drowned cavern mission involves following a murdered boy, because humans, too, are monsters.

But outside of the dungeons, the literal darkness gives way to a world that doesn’t seem so gloomy. While you won't encounter anyone else while inside a cavern (unless you're grouped with up to three friends), you can encounter strangers in the overworld, joining together to take down world bosses. 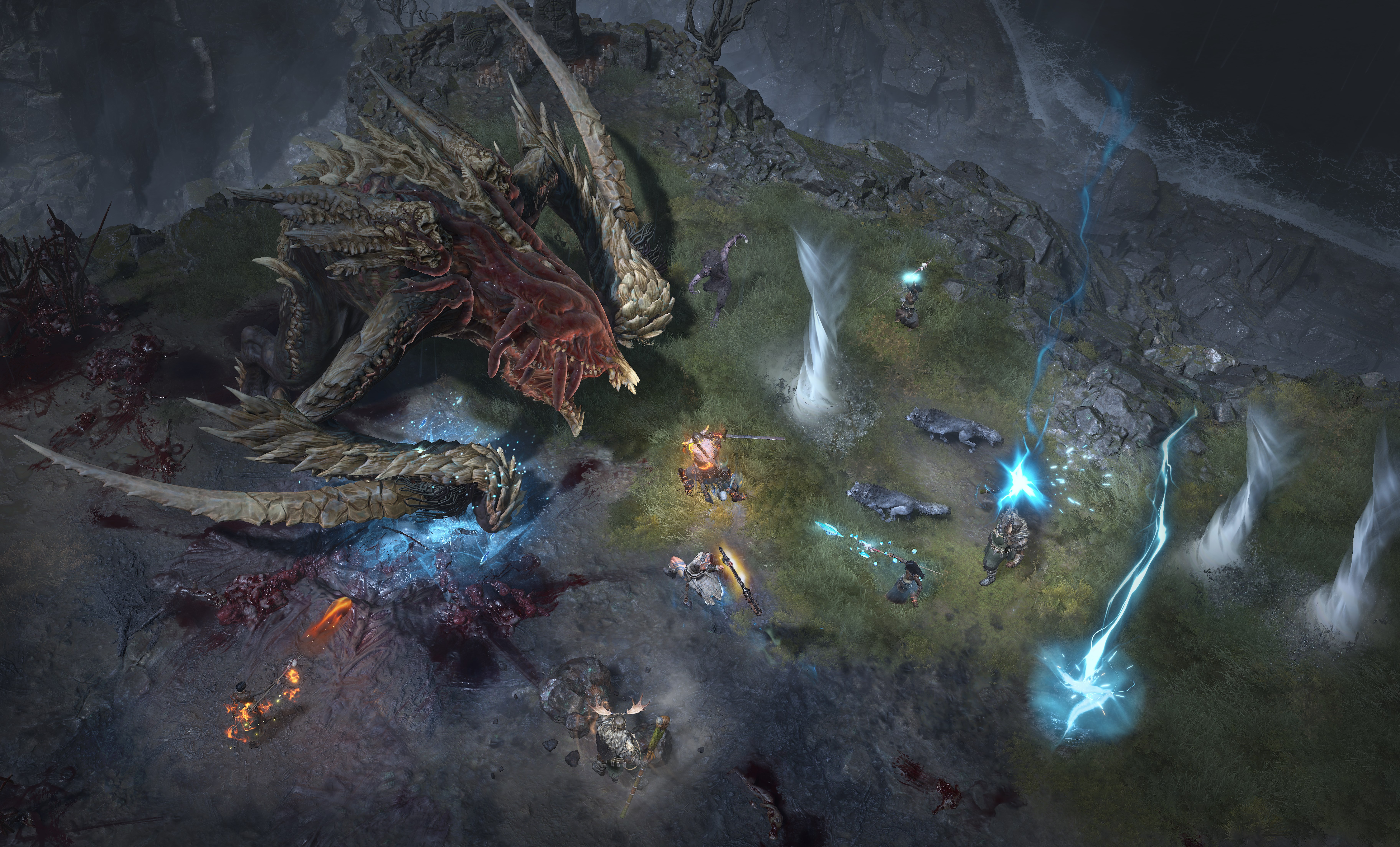 There’ll be five distinct regions eventually, with different weather conditions and the like, but the opening scrubby grass and running water doesn't feel so dark, though it is a bit overcast. Like a drizzly day in the Welsh hills, rather than a world where hell is out to get you.

Those hills are a point of pride. “Traditionally, Diablo’s been very flat,” says Murphy. “Now we actually have mountains and coastlines and all kinds.” Haroutnian adds: “you can climb up and down cliffsides and things like that too.” That’s just clicking on a big arrow to get down to a different level (at least in the demo) but I can see how it’s part of adding variety to the much larger world implemented for this sequel.

It’s a sequel that’s been a while coming, particularly for fans who became impatient after the reveal of Diablo Immortal last Blizzcon. Murphy said that their release schedule isn’t designed for any specific advantages, they just operate on a motto of “it’s ready when it’s ready.”

They’re hoping that newer fans will be able to drop in too, though. “When people play this game, [we want] them to feel the way I felt when I played Diablo 1. Like, I don’t know what the hell is going on, there’s this little town, it sure seems like a nice place, but it’s not, there’s this really messed up church that just so happens to have Satan at the bottom of it so, let me go fix that right now,” describes Haroutnian. “A lot of [Diablo 4] is stuff that hasn’t shown up in past games, we’ve seen little glimpses...but haven’t really explored it. So if you’re a new player or a returning player, everyone’s going to be exploring together.”

If you're eager for more details, note that Diablo 4 director Luis Barriga said during a panel at Blizzcon that the game was "not coming out soon. Not even 'Blizzard soon'." You might have a while to wait, and anything could change before the game is done.