While Adam has the definitive word in his Divinity: Original Sin 2 review, I've found myself unable to stop playing in every spare moment, and jotted down some of the very many things that make this game stand out, make it feel so very special. Below I celebrate its extraordinary replayability, the joy of moving furniture, and hideous undulating flesh blobs.

DOS2 offers you the most extraordinary amount of freedom when it comes to just how much you can muck about within its world. Famously you can kill absolutely anybody in the game, and still finish its main quest. Just think about the logistics of that - there's never a moment where killing one particular person sees the story crash into a wall, or forces a reload because it doesn't allow its threads to come together later. But on a smaller scale, it lets you break or move an enormous number of things for much more minor detail.

This isn't a game where there are "secrets" hidden in every room. It's just a game where, if you take it upon yourself to beat the ever-loving shit out of that bookcase, you may well find you can access a crumbled tower and a useful treasure chest within. Or you may find a wall. It's not fussed, it's not telegraphing these things, and it's behooves you to think, "Hmmm, I wonder what might happen if I pick up that enormous painting and put it over there?" Nine times out of ten, nothing! One time, maybe something fancy, maybe access to an empty box.

The point is, smashing past some crates for the hell of it isn't rewarded by some mechanism, rearranging the furniture isn't a primary feature, it isn't something you can game. It's just that sometimes, like in life, if you look behind a curtain you might spot something interesting. Which brings us to...

It Likes It When You Cheat

I think the best example of this comes with the Gargoyle's Maze. So yes, weeny spoiler in this illustration, but let me stress this is a non-vital part of the first chapter of the game - nothing that's going to ruin your day.

This is a maze of ruined walls, the entrance guarded by a gargoyle who gives you a coded warning on arrival that escape isn't going to be so simple, and that souls must be sacrificed. To get past him the easier way, he implies you're going to need a special ring. So you can go in and puzzle your way through, go off to hunt for that ring (I've never found it, still not sure if it's a bluff), or...

Or you can cheat. The maze is on some higher ground, a short way from the shore. A shore that has the entrance to a peculiar cave, with its own mess of puzzles and bizarreness inside. The cave, it turns out, proves an excellent distraction from another nifty idea. Because the game also has a teleport spell. One of the four million side quests introduces you to some gloves with the ability, and one of your characters may well pick it up if they've Scoundrel talents - having two characters with it is the ideal, because then you can relay your team across to otherwise impassable clifftops in turn. Or indeed, as it turns out, from one little stretch of beach over some unclimbable rocks, to another!

I only stumbled on this via nosy exploring, no greater purpose in mind. But once on this otherwise inaccessible secluded beach, after a spot of sunbathing, watching the waves and what have you, there are vines that let you scramble a route up the cliff faces. And get to the top, poke around enough, and you'll find a little door that lets you sneak into the cave from the rear. You're in!

Making this even more lovely, the Gargoyle snarls at you about what a cheaty cheat you are, but acknowledges it's rather in the spirit of the maze's creator, Braccus Rex, so you get away with it.

Indeed, making judicious use of teleports allows you to really quite spectacularly cheat the rest of the maze, too. And what makes this so fine, so much more than just the game offering multiple routes to the same objective, is to do it you need to mischievously use a tool at your own behest, rather than follow breadcrumbs or have it hinted toward. It's your own discovery, even though of course it's been carefully made possible once you've found it, and as a result feels much more special. 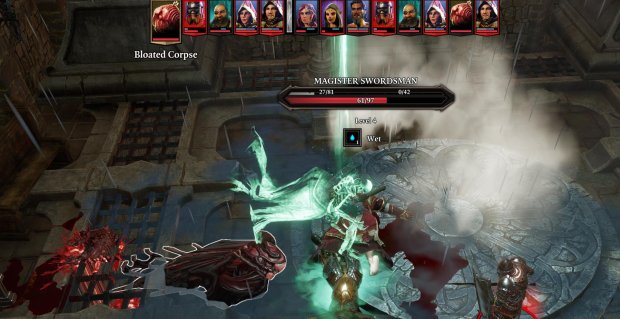 A real favourite thing about DOS2 is that there's not a moment of what I've played so far that could be described as "grimdark". In fact, to describe the game I've coined the term, "cheerfuldark". Despite the first chunk of the game's being set on a prison island on which magical people are being rounded up and experimented upon in brutal and sadistic ways, this is an outstandingly cheery game! It deals with some pretty hefty fantastical matters, has moments of pure heartbreak (you try breaking the news to a bear cub that his mother has died without getting a little bit of dust in your eye), and goodness me is it gory, but always with this big wicked grin behind its eyes.

It certainly achieves a lot of this through its gleeful bloodlust, and my favourite example of this is the Raise Bloated Corpse ability. I've played my share of RPGs, I know the deal. One of your characters has some necromantic abilities, and eventually you'll gain the ability to raise a little zombie to fight on your side, right? So when Ifan gained a big pile of Necromancer points, and I found a book teaching the ol' Raise Corpse ability, I really didn't pay attention to the word "Bloated".

Oh good lord it's revolting. When a foe has fallen in battle, or if there are corpses lying about the place as there so often are, you cast this spell on their cadaver and expect them to jump back up, perhaps emit some groaning noises, and act as cannon fodder for your team. But no, instead the corpse billows out revealing a vast amorphous blob of sweating meat. Meat that oozes and squelches as it undulates across the ground toward its prey. It's a wonder any enemy sticks around to see what happens next. The animation is wonderful too, its slug-like crawl somehow - somehow - almost cute. And its special ability is, of course, to repugnantly explode itself, spattering all around in juicy viscera.

I wasn't particularly delighted when I learned that saves for the Early Access build of DOS2 wouldn't work with the final released game. I completely understand why - the finished game has some significant differences, new characters, rewritten NPCs, and entire locations changed, so they'd hideously conflict. But still, many many hours of game down the loo. I didn't relish starting again from scratch. I'm delighted I did!

This really is a game that supports replaying, providing a noticeably different experience if approached in a different way. And it does this without a single scrap of procedurally generated anything.

Picking a different pre-scripted character from the bunch certainly helped. This time through I've even ditched the lady I was playing as last time from my party - partly because I'd already seen her surprises for the first section, and partly because it was kind of weird experiencing the moments I'd invested in before tangentially. Playing as Fane, a completely new character, undead, and a touch quirky, and also bringing in Beast, the dwarf, to join Lohse and Ifan, it's been wildly different!

Each pre-written character has their own unique story in the game, and while you'll see the periphery of them if you bring that person along with you, it makes such a big narrative difference to see it through a different pair of eyes (or indeed the holes where eyes once were). That's a big part of it. But genuinely, playing differently has created so many different experiences this time out.

Just little things, but last time I accidentally stumbled upon Gareth before his storyline had been introduced, and indeed arrived at the back of the 'dungeon' he was in through some exotic exploring. This time I met his friends first, heard them talk of his importance, and found my way to where he was imprisoned through the front door. The fights were completely different as a result of the approach, and the story played out in a new way. And that was just one NPC in one little smidgen of the map.

Many, many of those moments combined, playing things out in a different order, encountering different people, getting quests that weren't there before because I didn't show up until someone had died last time, or even finding out that with different characters you can talk your way into making allegiances with formerly formidable foes, all really adds up. It's felt so fresh this time, despite replaying it just days since the last time.

I previously wrote about my very earliest experience of Divinity: Original Sin II, when a horrid, horrid guard killed my adopted kitten.

I bloody showed him. 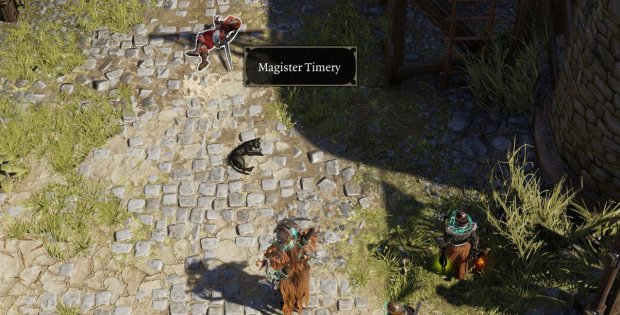 Gosh it was satisfying, when I returned to where he and his companions guarded, a level higher than them now, and blasted them to bits. I gloated over his corpse, and I dedicated the victory to poor little Meow.

On this second play through, however, the cat had a somewhat more ignominious death. The bloody idiot set itself on fire. It had the sense to keep out of the way during a battle, but then decided - as only cats can - that it wanted to stand in a fire and wasn't going to budge. Sigh.

Still though, when it came to killing the bastard Magister who got Meow last time, he must have been damned confused about the relish with which I targeted him. The bastard.